As the 2018 Mercedes-Benz A-Class continues to set new standards of style and connectivity, we look back at the history of this premium 5-door family hatchback. 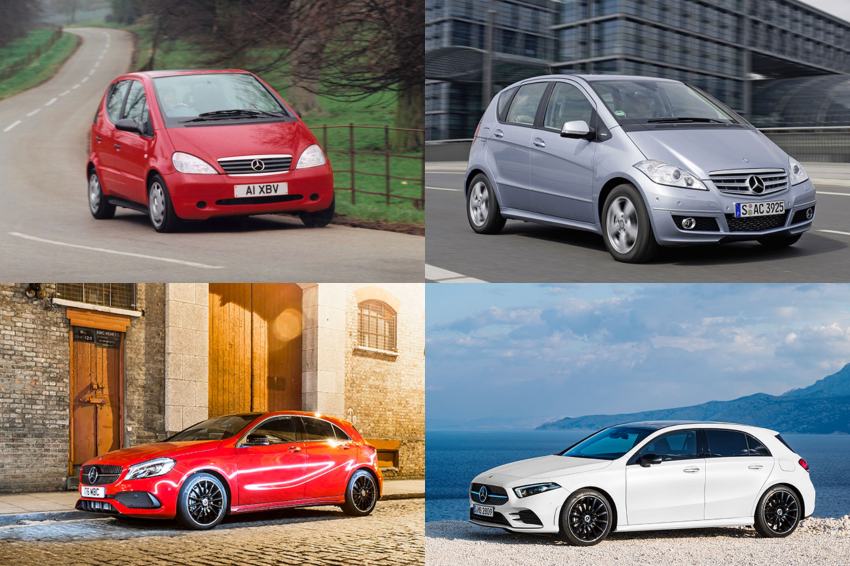 The Mercedes-Benz A Class through the years

The 2018 A-Class has to be experienced to be believed, packed to the brim with luxurious features and technological wizardry (augmented reality sat nav, anyone?). But there have been a few changes since it was first introduced in 1997…

An overview of the A Class from the Geneva Motor Show in 1997.

Unveiled at the Geneva Motor Show in 1997, The A-Class became known as the ‘Baby Benz’, a compact entry level model that was designed to be versatile and user-friendly. As this was Mercedes-Benz, though, it redefined standards in the segment thanks to 20 new technological innovations in its design, including a groundbreaking floor called ‘the sandwich’. By elevating the floor and mounting the engine partly under it, interior space was improved and a frontal impact would cause the engine and transmission to slide under the pedals, rather than into the cabin. The fledgling A-Class also redefined the whole concept of versatility, with (count ‘em) 72 different seating configurations, thanks to a removable passenger seat. 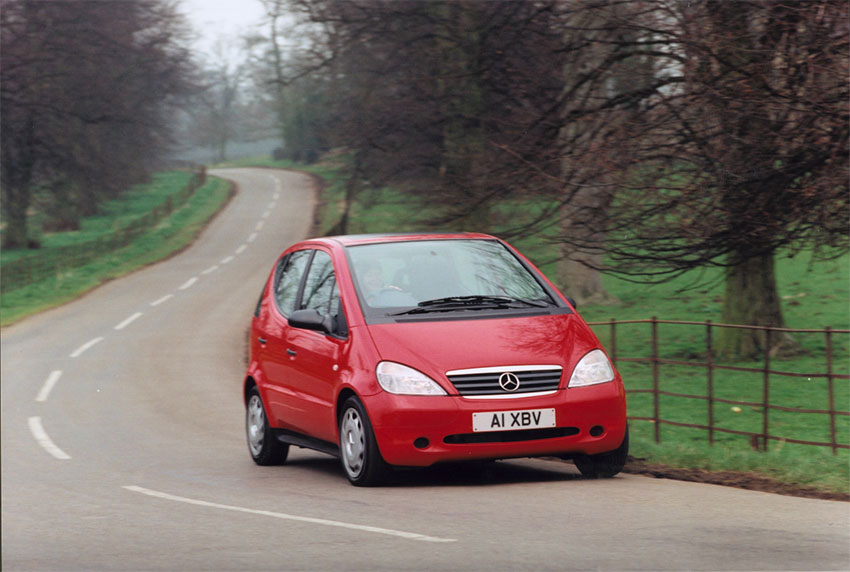 Yes, it sounds like something out of the pages of the Sunday Sport, but in 1998 the A-Class immediately became notorious after flipping over during a controlled test by a Swedish automotive magazine. In the ‘elk test,’ a row of cones were positioned to represent a sudden obstacle in the road such as an animal, a reversing car or a child. Mercedes-Benz recalled the A-Class, adding electronic stability control and creating a sturdier suspension, at an estimated cost of 300 million Deutschmarks. However, the first generation, despite its initial safety setbacks, proved a popular and practical choice. By the time the second generation was launched in 2004, the A-Class had sold 1.1 million models. 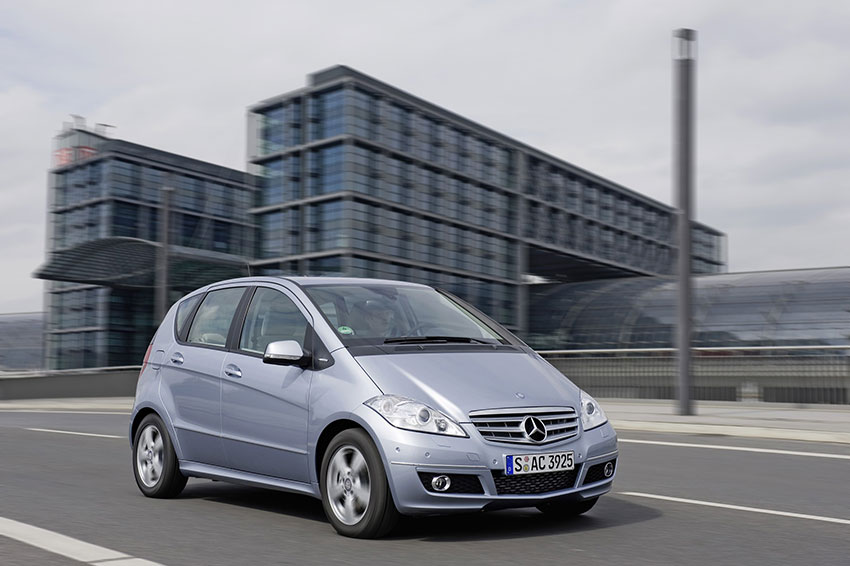 Loaded with safety tech, including an array of airbags and safety restraints, this model was a seriously kitted-out family favourite, promoted as an affordable luxury car. Its projected sales target (50,000) was broken before it even got to showrooms. The sleeker shape and enhanced interior materials were complemented by a range of seven powertrains, and there was even a cutting-edge hydrogen fuel cell version – the ‘F-Cell’ – which was capable of a range of 99 miles. A 2008 update saw the addition of stop/start technology and active park assist, while a new electrically-powered model, the E-Cell, made its debut in 2010, with a battery manufactured by Tesla. 500 were built for sale in Europe. 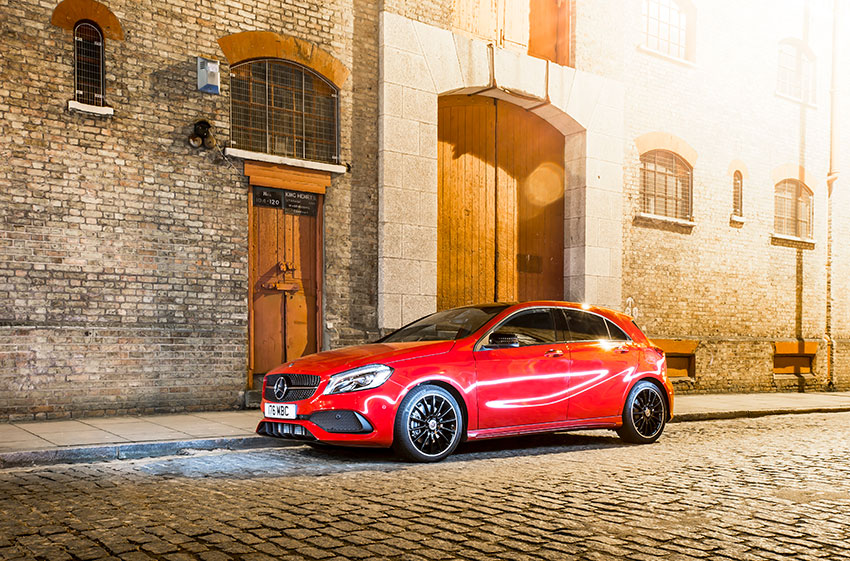 Boasting a longer, larger and sharper silhouette, the launch of the third generation saw the A-Class becoming a real style leader. Designed to appeal to younger drivers, it did away with the high driving position and elevated ‘sandwich’ floor, and was pitched as a tech-packed hatch with a luxurious interior. LED headlights, automatic climate control, sat nav and touchscreen infotainment all featured. A 2016 facelift added an imposing diamond cut front grille and some sharper looking headlights, and a hot hatch appeared in the line-up – the AMG A 45, capable of 0-60mph in 4.2 seconds – but still able to meet strict Euro 6 emissions guidelines.

2018: A benchmark in intelligent driving 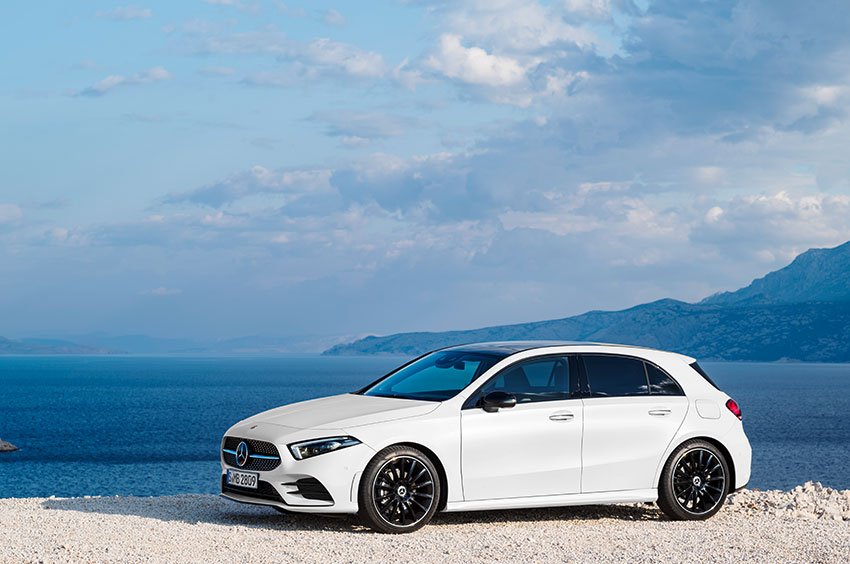 The all-new Mercedes-Benz A Class

Thanks to the introduction of Mercedes-Benz UX technology – which, via a pin-sharp widescreen display with HD graphics, allows the driver to configure everything from driving style to destination – the new A-Class is still redefining the family car. Using the practicality and innovation at the heart of the original first-generation model, the new A-Class adds even more style and spec, including natural speech recognition that learns to respond to your voice. Proof, if needed, that the A-Class is definitely in a class of its own.