What is the Mazda CX-30? Motoring journalist Jim McGill spends some time with this new model to get some answers. 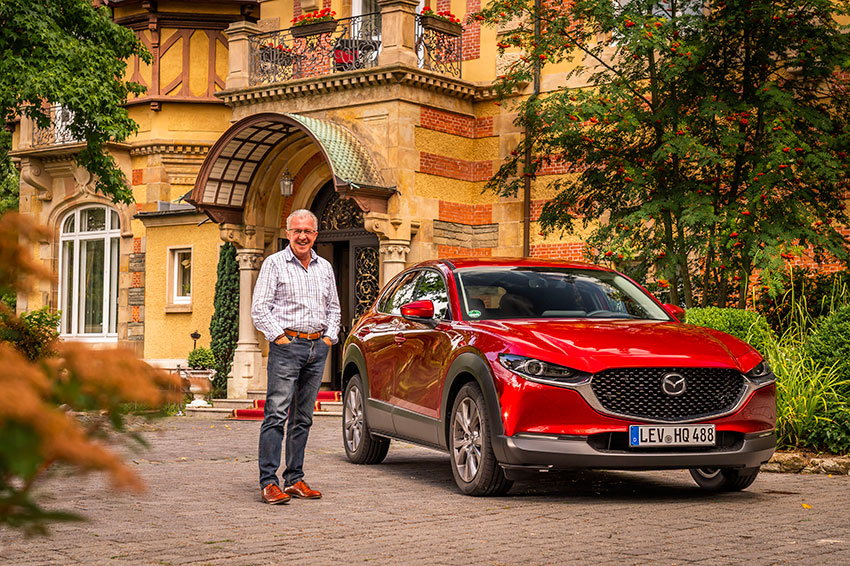 It’s been designed to sit between the still smart-looking, excellent but ageing CX-3, and the also excellent, but slightly newer CX-5; so naturally you would expect Mazda to badge its latest crossover CX-4. Right? Wrong! It’s actually the CX-30.

Confused? Well there is a rather straightforward explanation. A Mazda CX-4 already exists. Unveiled at the Beijing Motor Show in 2016, the compact crossover is produced and sold exclusively in China. So, somewhat confusingly, the model Europe gets is the CX-30. A topic which would have been interesting to debate with the great Chinese philosopher, Confucius, is: what exactly is the CX-30?

I have to be honest, I’m not exactly sure what it’s meant to achieve or who it’s aimed at.

Yes, it’s a good-looking thing (it should be — it’s based on the latest, pinpoint-sharp Mazda3 hatchback), drives excellently, is beautifully equipped inside and has a superb driving position with two of the most comfortable front seats recently found in any new car. 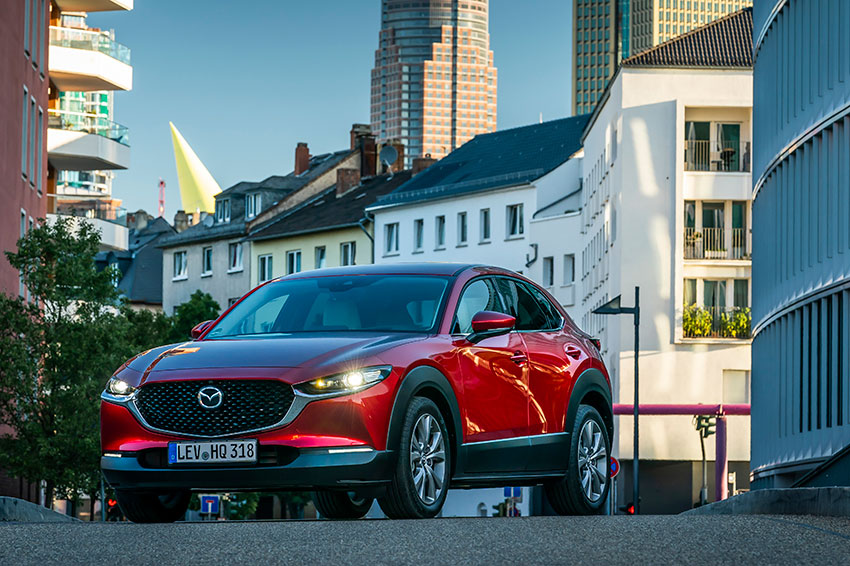 I sense there’s a ’but’ coming up

Perhaps my view is blurred by the fact I, like many others, think both the CX-3 and CX-5 are class-leaders in their own sectors. There’s nothing really to match them. Ok, they’re bit more expensive than the opposition, but boy are they good. The CX-5 especially — it’s as close as you’ll get to a five-seat MX-5. I love it.

So let’s look at the CX-30 objectively. We know where it’s positioned in the market, and within the Mazda range, so that’s fine. Measuring 4395mm long and 1540mm in height, the new crossover is around 7cm shorter and 10cm taller than the Mazda3 hatchback on which it’s based. But significantly, Mazda says the CX-30 is shorter because it believes it will make the car easier to manoeuvre in towns where it believes the newcomer will essentially live.

Ok, I get that. But why is it taller? To spot more easily in the supermarket car park? Nah! Of course it’s taller because it allows the driver to sit slightly higher up, as is the appeal of the flood of modern-day crossovers. After all, it’s expected to go head-to-head with the likes of the Peugeot 3008, Toyota C-HR, Volkswagen T-Roc and even Volvo XC40. By comparison, the CX-5 meanwhile takes on the Nissan Qashqai and Ford Kuga.

Does the CX-30 have any links to the Mazda3? 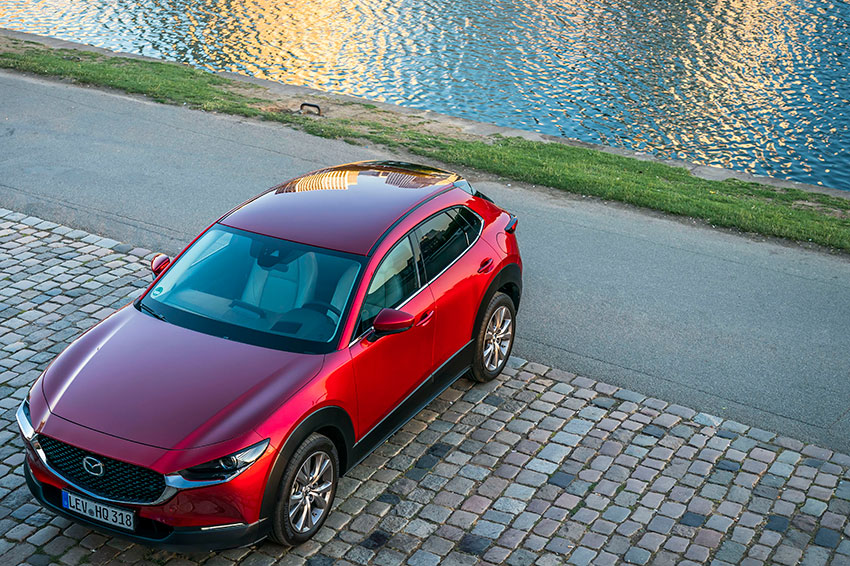 Mazda has a lot of faith in the CX-30. It actually believes it could become its best-selling car in Europe. That would put it ahead of the Mazda2 and 3 hatchbacks, 6 saloon/estate and both CX-3 and CX-5 crossovers. Might be worth just whispering here, there’s the probability a new CX-5 will make an appearance in the second half of 2020.

As I mentioned earlier, the CX-30 is based on the Mazda3, so that means the same engines. There’s a 114bhp 1.8-litre SkyActiv-D diesel and a 120bhp SkyActiv-G 2.0-litre petrol, with either a six-speed manual or six-speed auto gearbox. The new SkyActiv-X compression-ignition petrol engine will also be available when the CX-30 arrives in dealers in November.

And it would be wrong to see the CX-30 simply as a Mazda3 on stilts or steroids. The newcomer’s bodywork is totally new and subtly different. There’s also a more practical rear third to go with the rugged-looking black cladding that lines the sills and wheel arches. From certain angles, it is a bit of a head turner. 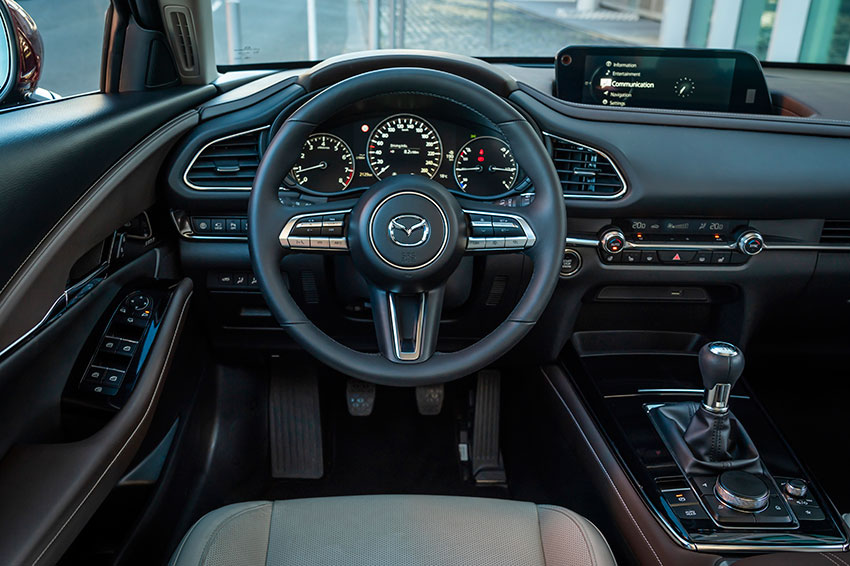 Inside the spacious and rather luxurious — certainly on the GT Sport spec I tested — cabin, it’s pretty much a new Mazda3. Which is no bad thing because the hatchback has already impressed me with its attractive level of quality. And in fact, the top of the fascia of the CX-30 further benefits from an extra layer of padding.

The centre console is dominated by the excellent new 8.8-inch infotainment display, and all the materials used are strong and high-quality. There’s no denying it’s a comfortable place to be. In fact, not only does the CX-30 leave its more mainstream rivals well behind, it challenges some of its premium rivals for luxury.

Rear space will be more than fine for the average family. I’m 5ft 8in and I could happily sit behind my driving position. Interestingly, Mazda says there’s as much space between the front and back seats as there is in the bigger CX-5. Bootspace too is up to the mark, with a capacity of 430 litres, accessed via a wide and tall opening. 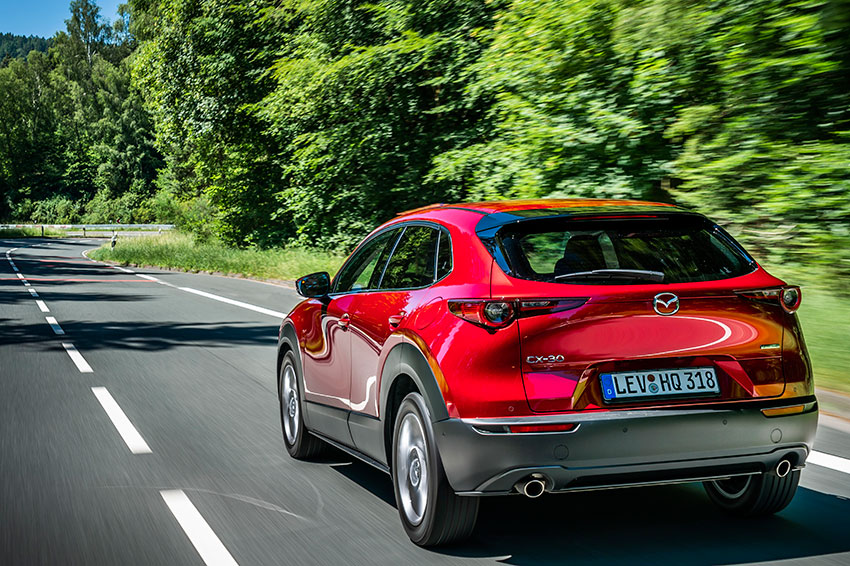 Out on the road, the diesel is an attractive proposition if you know you’re going to be racking up the miles. Otherwise the 2.0-litre 120bhp SkyActiv-G petrol is a sound, if rather relaxed choice; it takes 11.2secs to reach 62mph from standstill. The new Skyactiv-X — which wasn’t available to drive in the CX-30, but was impressive in the Mazda3 — will more likely be a better petrol option. And I would definitely recommend the six-speed manual over the auto.

The ride is surefooted — as you would expect, given its Mazda3 underpinnings — relaxed and quiet at motorway speeds, and equally unobtrusive when dawdling through town, or doing the school run.

How much will it cost ….

… and what’s the verdict? 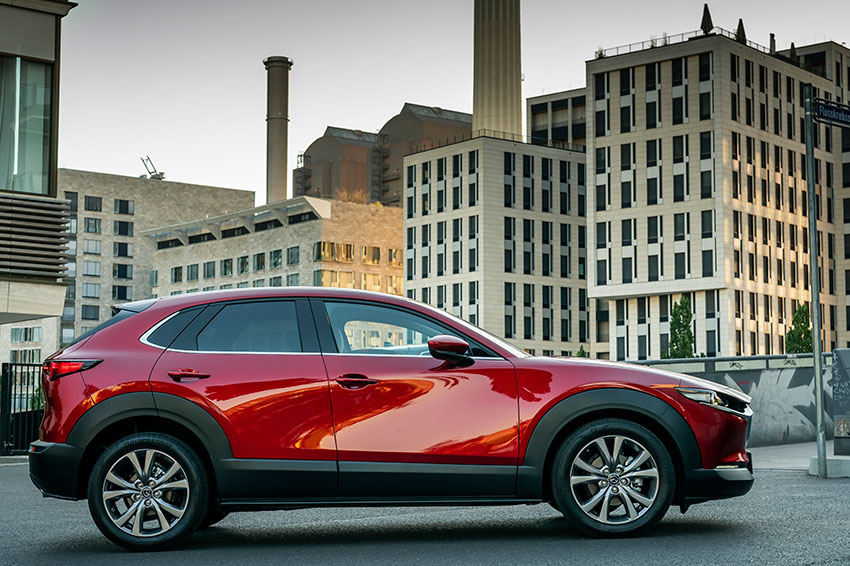 Well, remember my uncertainty; maybe I’m missing something here? After all, the Mazda gurus believe the CX-30 will be its top seller in Europe! Sure, it’s a smart-looking car. And, yes, it does ‘everything it says on the tin.’

There’s no denying the Mazda3, on which the new crossover is based, is the better handling, more economical, faster, just as practical, and certainly cheaper option. It’s the sensible buy. But in a market ever-more dominated by crossovers, the CX-30 will attract its own loyal following. I just wonder what Confucius would say?