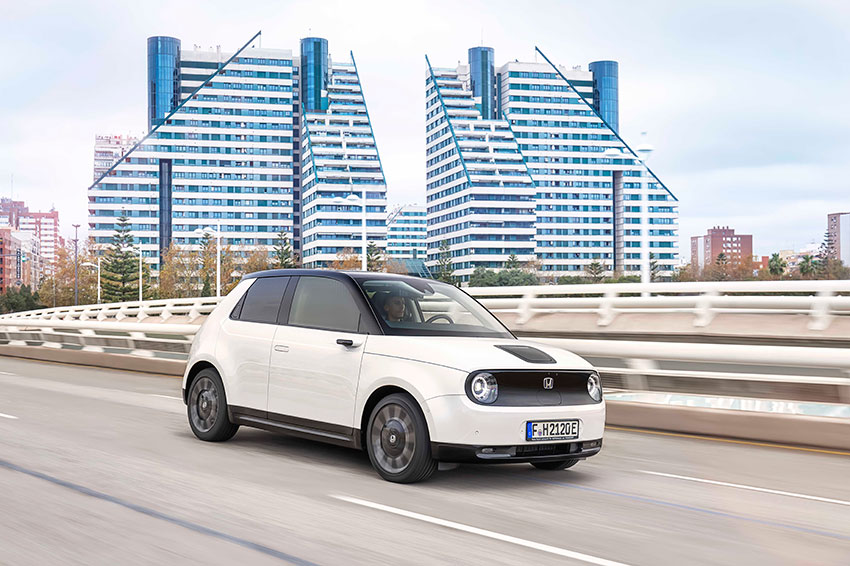 Although it’s new to the scene, the Honda e already has such acclaim that it stands out from all other performers on the electric vehicle stage. If it were in a television series, producers would make sure it was in every instalment to guarantee high viewing figures. Why? Well, just look at it. It’s adorable, like a little puppy.

But beneath the Honda’s sweet exterior lies a wild beast, just waiting to burst out. Well, maybe not quite a wild beast, but the all-electric car really is quite fiery when you need it to be.

You see, even though the e is intended to be an innocuous little city chariot, it’s still a ball to drive. There are two available – the basic 134 bhp Honda e and the more compelling 152 bhp Honda e Advance. The entry-level variant gets from a standstill to 62 mph in 9.0 seconds, while the Advance I drove accomplishes the zero to 62 mph sprint in 8.3 seconds. The fun factor can even be cranked up a turn if you put Sport Mode into operation. This drive setting enhances the pedal response for more purposeful acceleration. 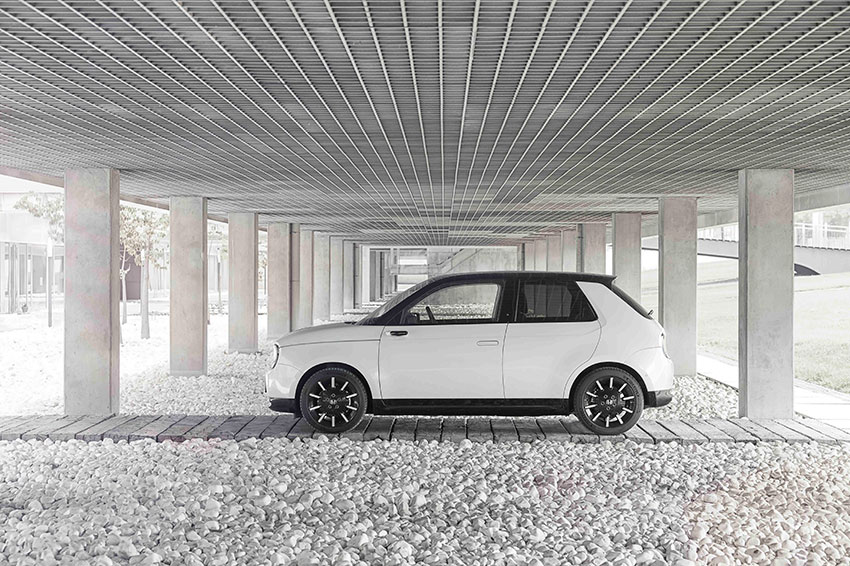 The e’s minuscule measurements and amenable suspension allow you to push it into corners speedily and self-assuredly. What’s more, the car has a turning circle of 4.3m – this makes it mind-blowingly manoeuvrable, especially in narrow city streets. It’s enough to make a black-cab driver green with envy.

The only thing to rain on the e’s parade is the plethora of brake regeneration levels. In the regular drive mode, there are four settings to deal with via steering wheel paddles. But, turn the ‘single-pedal’ button on, and you get more extreme brake regeneration with three levels of one-pedal propulsion. The pedal reaction is easy to get used to, so you’re soon mindful of how long it’ll take the Honda to scrub off speed. 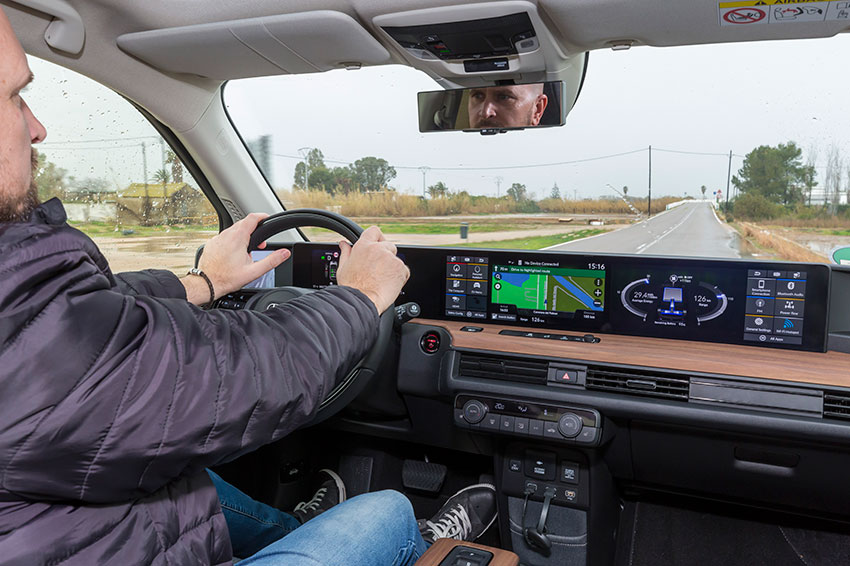 Inside, the Honda e is a game of two halves. On the one hand, there’s a lounge-lizard eighties ambience, thanks to a wealth of wood trim and sofa-like material. On the other hand, you get a futuristic full-width digital dashboard. A touchscreen double act devours the lion’s share of the dash. These are the principal infotainment displays – a gateway to a bundle of built-in apps and services accessed by pinch or swipe gestures. Smartphone integration is trouble-free, too – just hook up your phone, and Apple CarPlay and Android Auto will let you get into all you need to on the screens.

Functions can also be switched between the displays, allowing you and your front seat companion to view individual apps. For example, while I was keeping an eye on the navigation to follow Honda’s test-drive circuit, my co-driver casually glanced through which songs would complement our trip.

So, what other technology is there in the Honda e? Well, a highlight is the Side Camera Mirror System ¬– a replacement for established wing mirrors. Cameras are used to show real-time pictures of what’s around the vehicle to a couple of screens inside the e. It takes getting used to, but the live images are so flawless it gives you utter assurance behind the wheel. The tech is perfect for driving in demanding, busy areas – in other words, metropolitan locations, where you depend on your mirrors. Honda makes no secret about the fact the e has been designed for this kind of use – and that’s reflected in the car’s range. 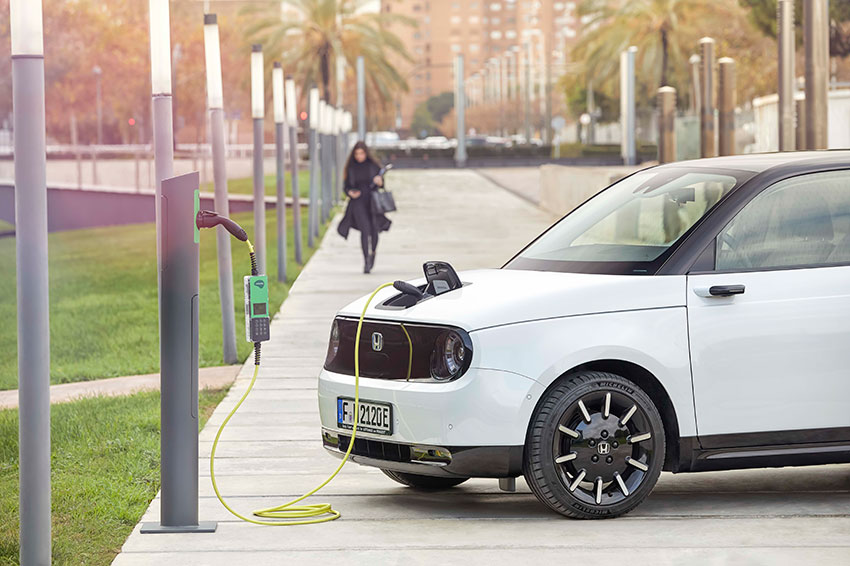 On a brim-full charge, the Honda e will achieve up to 137 miles on 16-inch alloy wheels, or 125 miles on 17-inch alloys. But, as with all electric vehicles, certain things will affect the range. For example, my e Advance was charged to 93 per cent when I hit the road around an unexpectedly drizzly and chilly Valencia. After an hour of dilly-dallying (and occasionally whooshing) about, with the wipers going full speed and the heating on the highest setting, the figure had nose-dived to 31 per cent. The heating and windscreen wipers had, without a doubt, sapped the 35.5 kWh battery.

Thankfully, you can return around 80 per cent of the Honda e’s range via a rapid charger. That gave my colleague and me a brilliant excuse to go and get some much-needed caffeine. Without fast charging, you're looking at lots of cups of coffee – so my recommendation is to plug the e in whenever and wherever you can to stop the battery from getting too low.

Would I purchase or lease a Honda e? Absolutely – if I wasn’t married with three children. It’d be great for whirring into town for business meetings or for whizzing along circuitous country lanes. Unfortunately, it’s a four-seater – and with only four seatbelts built in, it’s entirely impractical for a big family. Yes, I know, it’s not intended to be a family vehicle but at nearly £30,000, what’s the point in even having the e as a second car if you can’t fit everybody into it on the few occasions you need to? If I had that amount of cash spare, I’d be ordering a motorbike complete with leathers, or a two-seater sports car. Let’s face it, what’s a full-on midlife crisis about if you can’t indulge yourself? 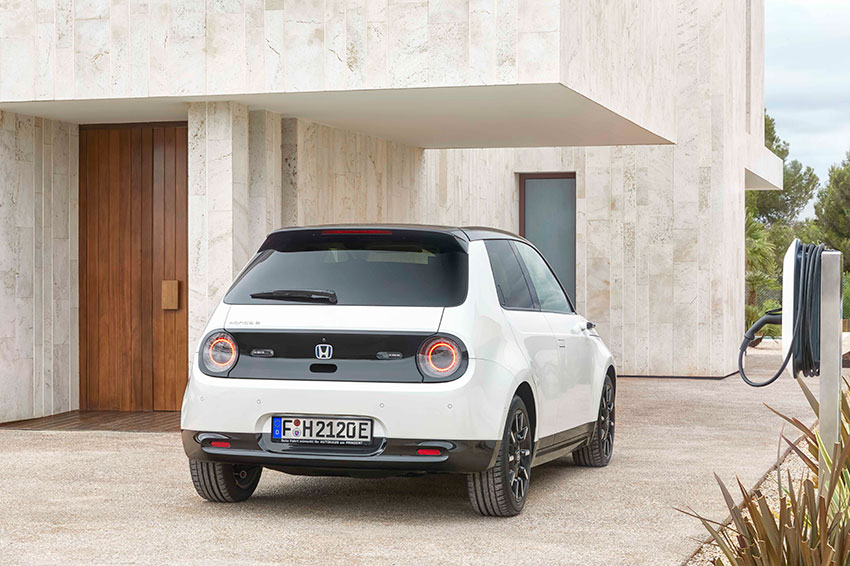