Arnold Clark is proud to support Cash for Kids

Arnold Clark has been supporting Radio Clyde Cash for Kids since the 1990s. 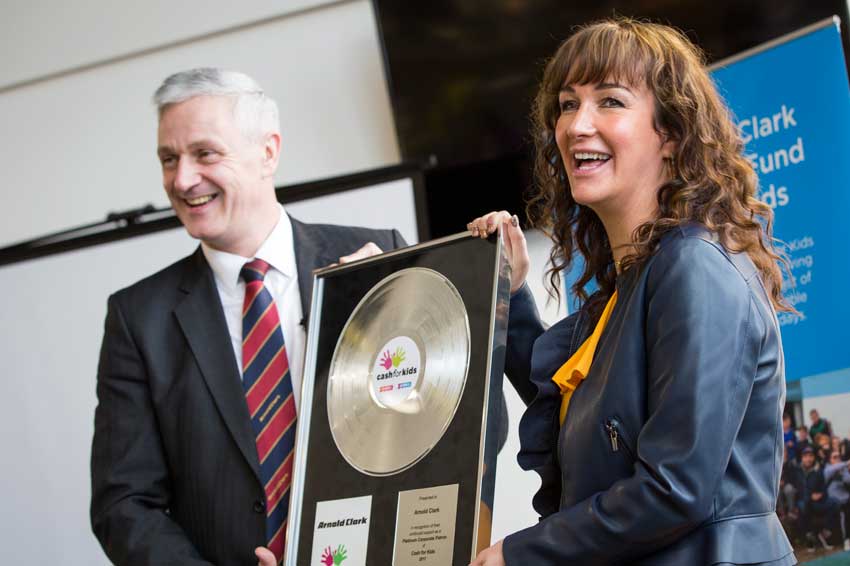 Eddie Hawthorne being presented with a Cash for Kids Platinum Plaque.

Arnold Clark is proud to have a strong partnership with Radio Clyde Cash for Kids. Starting back in in the 1990s, the two organisations have worked together across a number of projects, all with the shared goal of helping to raise funds and improve the lives of vulnerable children living in poverty in Glasgow and across the West of Scotland.

Here are just some of the ways that Arnold Clark and Cash for Kids work together. 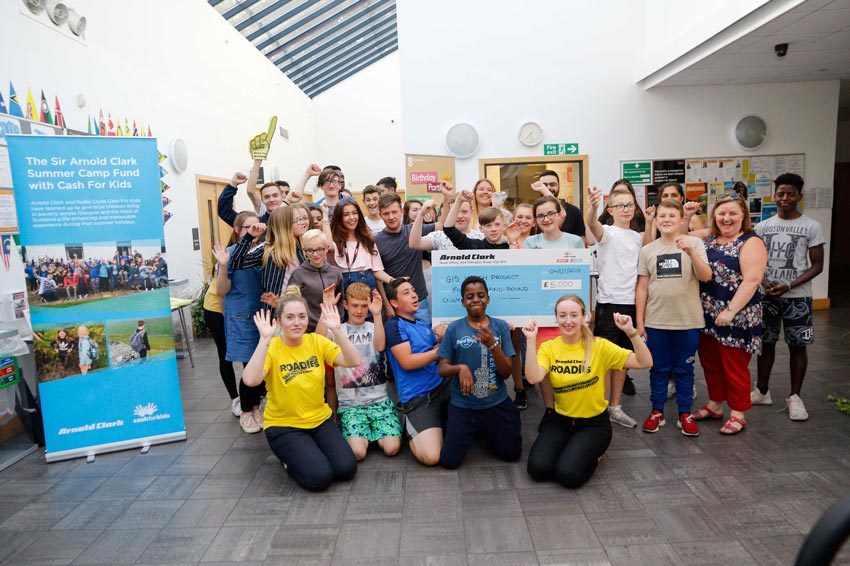 Launched in 2018 to commemorate Arnold Clark’s founder, the Sir Arnold Clark Summer Fund provides opportunities for young people living in Glasgow and the West of Scotland to have a life-enhancing and memorable experiences during the summer holiday period. Community groups working with young people can apply for a £5,000 grant to help them with their projects and there’s also an opportunity for 10 young people to gain work experience at Arnold Clark and see some of the opportunities that could be in their future.

Speaking at the launch Arnold Clark’s Chief Executive and Group Managing Director, Eddie Hawthorne, said: ‘Sir Arnold was a keen supporter of many charities, but the work that Radio Clyde Cash for Kids carries out to make the lives of thousands of vulnerable children living in poverty was one he was particularly keen on. The Sir Arnold Clark Summer Fund is a fitting tribute to him, and the Arnold Clark Group is delighted to make our positive impact on young people even greater than before by providing an exciting work experience opportunity for ten young people.’

Making a difference through donation 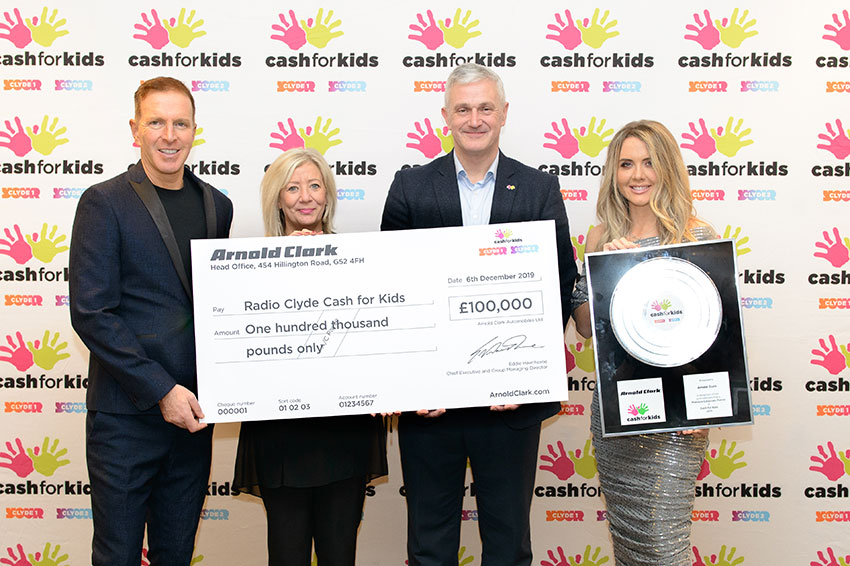 On presentation of the first award, Debbie Fraser, Regional Charity Manager for Cash for Kids said: ‘We are delighted to award Arnold Clark with this Platinum Patron Disc in recognition of their generous support towards vulnerable children across Glasgow and the West of Scotland. Together we can continue to make a difference and to help support and address child poverty’. 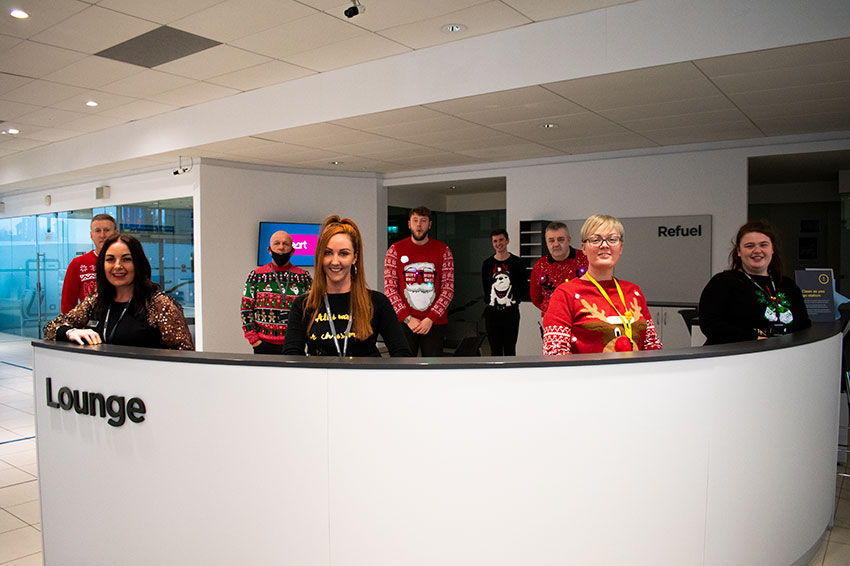 While the Arnold Clark Group makes a big contribution to Cash for Kids, our individual branches in and around Glasgow fundraise throughout the year with a range of events. And everyone around Arnold Clark branches gets into the festive spirit with Cash for Kids Christmas Jumper Day, bringing colour into the branches to help raise funds for the charity’s Mission Christmas campaign. 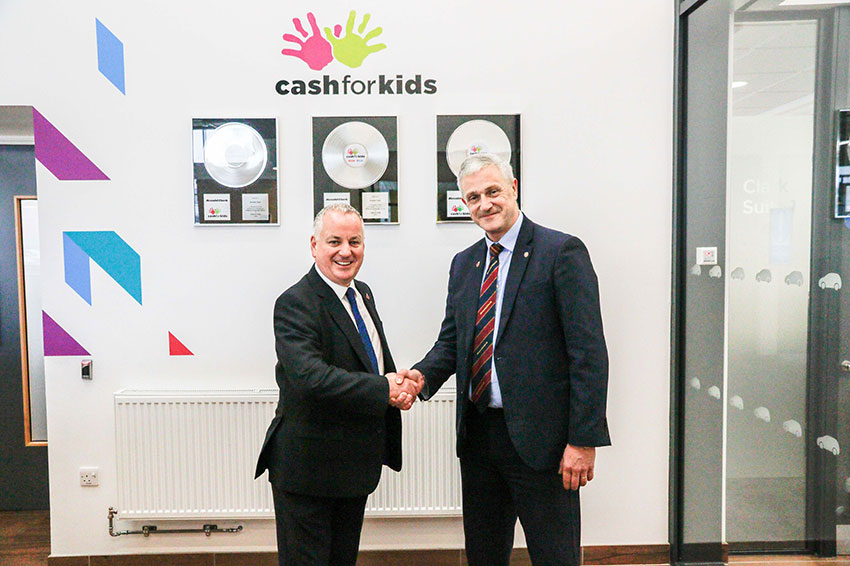 In 2018, Arnold Clark’s Chief Executive and Group Managing Director Eddie Hawthorne became the chairperson of the board of trustees for Clyde Cash for Kids, taking over from former First Minister Lord McConnell of Glenscorrodale.

Upon his appointment, Eddie said: 'The Arnold Clark Group has supported the work Clyde Cash for Kids carries out for many years. Child poverty remains a blight in today’s society and the work that Cash for Kids does to tackle this issue head on is vital. Children and their families, living in our own communities, face daily challenges which have a direct impact on their health and wellbeing – and the charity’s daily efforts work towards making their lives better.

Clyde Cash for Kids has benefited from Arnold Clark’s talent and resources across the board with the Arnold Clark Film Studio helping to make promotional video content for events, and new cars are donated every year to help raise money as part of the Cash for Kids Lunch auction.