The power, and the glory: Ford's new four-wheel drive, the Ranger Stormtrak, is sure to take plenty plaudits once it hits the roads in 2021. 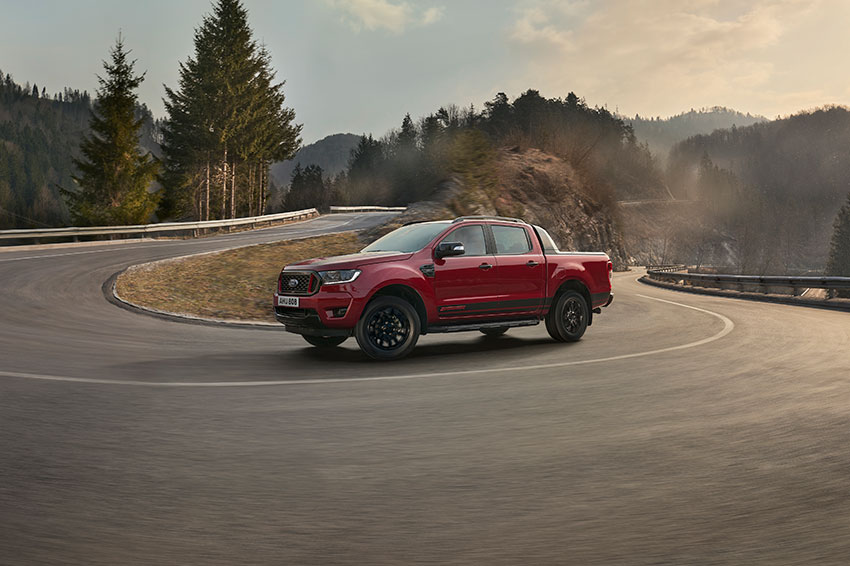 Picking up from the success of the Ford Ranger, Ford have introduced an all-new, special edition of their acclaimed pick-up truck: the Stormtrak. Along with its special edition brother, the Wolftrak, this four-wheel drive beast capitalises on what people love about the Ranger, and runs with it!

With striking looks, futuristic technology and an engine that will make the hardiest of car enthusiasts swoon, the Stormtrak is here and is ready for anything life can throw at it.

So, what makes the Stormtrak stand out from the crowd?

The Stormtrak gives customers more of what they loved about the Ranger – and more is definitely the word to use with the Stormtrak. It’s more stylish, more luxurious, and offers even more pulling power. 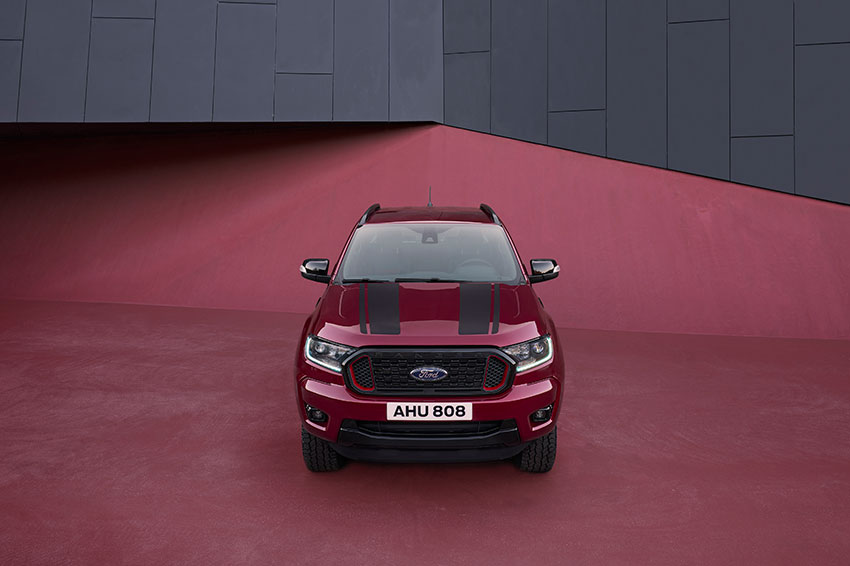 As with any car, the first thing you are going to notice about the Stormtrak is its dynamic outer appearance. It boasts a range of colours that are big and bold, looking exactly how you would expect with names like ‘Striking Rapid Red’, ‘Frozen White’, and ‘Lightning Blue’. On top of that, the Stormtrak offers unique cosmetic additions, such as the black decals on the bonnet, body sides and tailgate that add a fantastic edge to the head-turning colours already on offer. 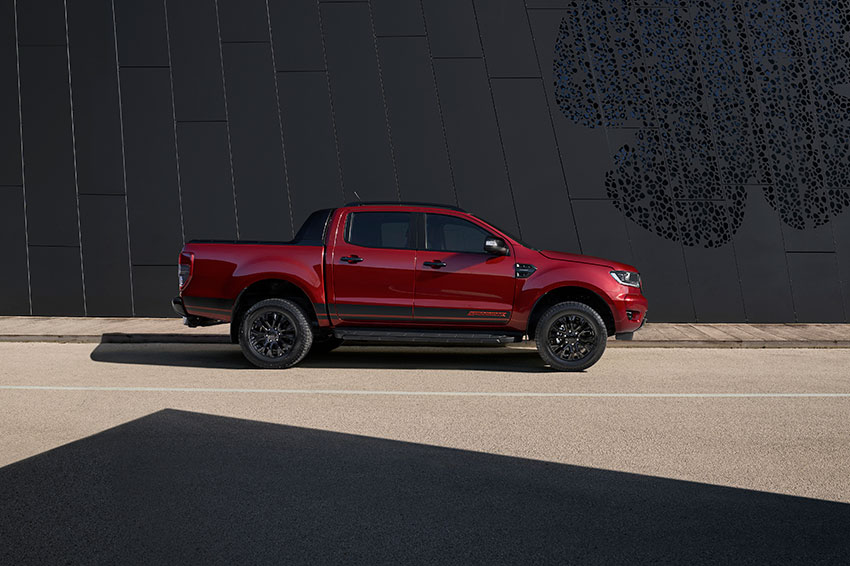 The front features an exclusive red grille insert, a centrepiece to the Stormtrak’s look; LED headlights; and underbody protection comes as standard, so you don’t need to worry when you take it off the beaten track. To cap it all off, the Stormtrak comes with 18-inch black alloy wheels, completing the look and ensuring you are ready for anything.

It’s what’s on the inside that counts

But if you thought they left all the good looks for the outside, don’t you worry; the inside is equally dressed to impress. To start with, there are the Stormtrak-only premium leather grain seats that swathe you and your passengers in rich leathery luxuriousness. The interior also boasts some Stormtrak exclusive red-illuminated ‘Ranger’ sill plates, and the whole experience is finished off by Tinted Graphite instrumental panels and door spears. 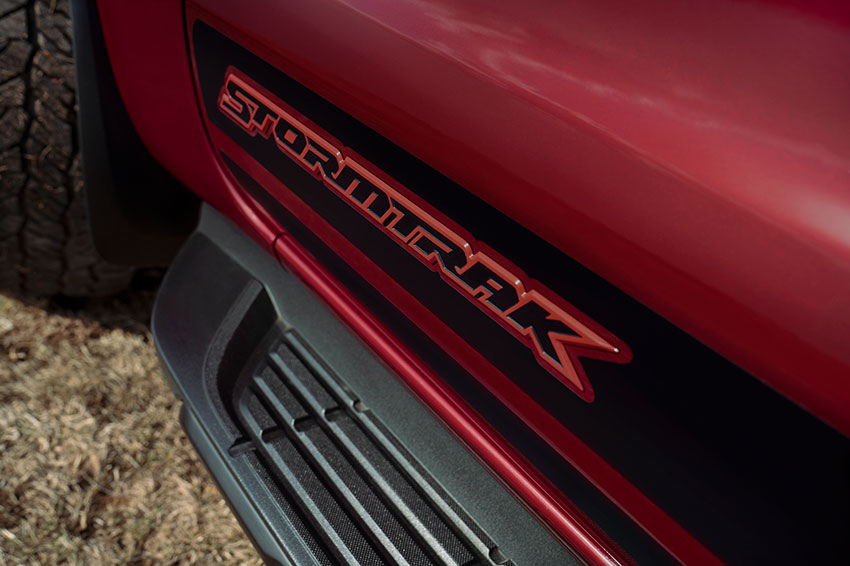 So, the Stormtrak looks good, but does it do its job as a pick-up truck?

It certainly does! Every Stormtrak comes kitted out with an advanced 213 PS 2.0-litre Bi-turbo EcoBlue diesel engine that delivers a whopping 500 Nm of torque – allowing a 1 tonne payload or 3.5 tonnes of pulling weight. Ford’s acclaimed 10-speed automatic gearbox also comes as standard, giving you a smooth and responsive drive, regardless of the weight you’re pulling.

Not only that, but the Stormtrak has some great features to make your life that much easier to load your truck up. These include a plastic liner for the load area, a load divider, and Ford’s ‘Power Roller Shutter’, allowing you to open and close the load cover with a simple press of a button. With a sports hoop bar fitted for added safety and selectable four-wheel drive for your off-road jobs, there is nothing you can throw at the Stormtrak that it can’t handle.

When can I get my hands on one?

If you’re looking for a pick-up truck that gives more than just stellar performance, the Stormtrak is set to arrive in showrooms October 2021 – and it’s available to order now. 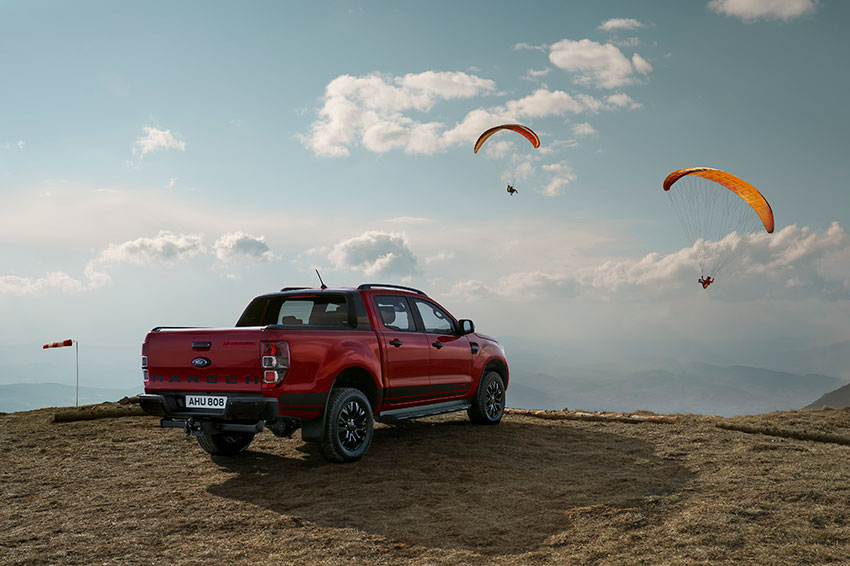