Jim McGill takes a look at the bulked-up Mustang Mach-E from Ford. 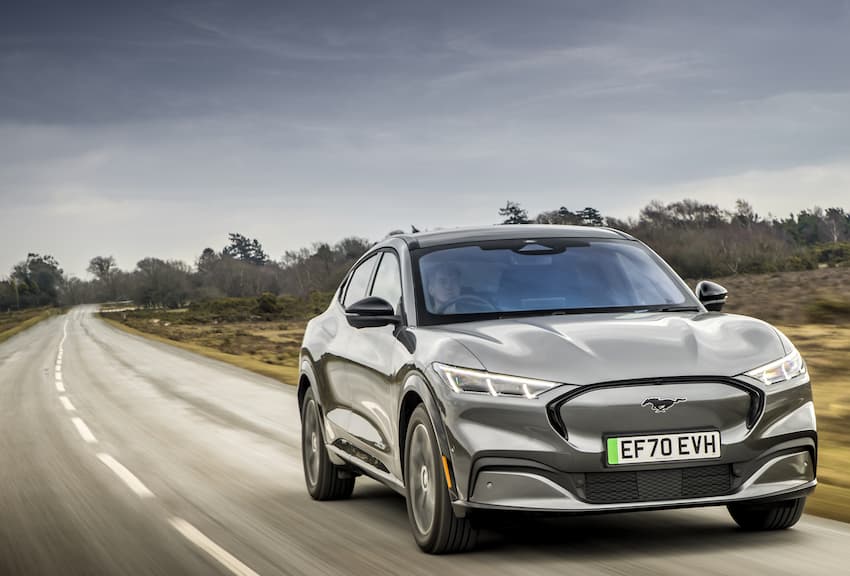 The new Mustang draws on heritage with pony badge and strap lighting.

Ok, let’s get one thing straight right from the start: Ford’s latest Mustang bears absolutely no resemblance — apart from the fact it has the Blue Oval badge on it — to the iconic muscle car Steve McQueen hurled, leapt and slithered round San Francisco in the 1968 Hollywood blockbuster, Bullitt. This new Mustang Mach-E is an all-electric family SUV.

Ford clearly has its own reasons for using the Mustang name and placing the famous ‘running pony’ logo on the electric car’s blanked-out front grille, so I’ll not get involved in the debate. Whether you think it right or wrong, I’ll leave it to you. Instead, I’ll just focus on what is Ford’s cheapest, least powerful battery-powered model in the Mustang Mach-E range, the RWD (rear-wheel drive).

There certainly is. First there’s an extended range all-wheel-drive version which will set you back £57,030, then there’s the Mach-E GT. The latter, which will scorch from standstill to 62mph in a rather eye-watering 3.5-seconds, has a top speed of 124mph and a range of around 310 miles, will set you back £65,080. A not inconsiderate amount of cash.

So, with that in mind, we’re turning our attention to the rear-wheel drive model. Price? £41,330. 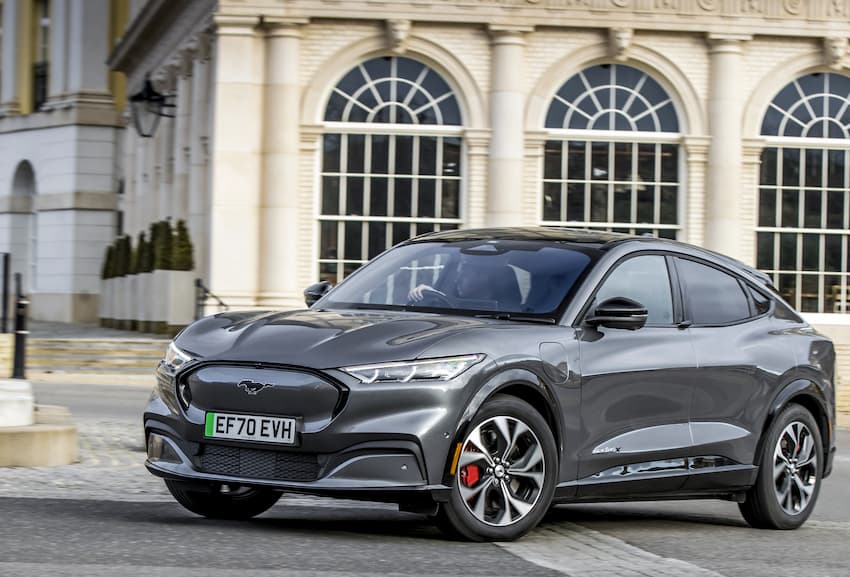 Does it qualify for a government grant?

Sadly, and rather frustratingly, no: it misses out on the UK Government’s Plug-in Car Grant by £6330. But it does come with a huge amount of excellent kit as standard; more of that later.

Ok, what about batteries, range and performance?

The Mach-E Mustang RWD delivers 265 bhp and 317lb/ft from its battery pack, meaning it can cover 0-62 mph in 6.9secs and will carry on to a top speed of 111mph. Not so long ago, such a 0-62 mph time would have been the headline for pretty expensive sports cars; now it’s standard performance for a family car thanks to electricity. And that power s delivered via a single-speed step-down transmission.

Officially Ford says the Mustang will cover 273 miles on a full charge. That compares to a quoted 379 miles for the extended range version. In ‘real world’ driving conditions, it’s more likely you’ll achieve anything between 210 and 230 miles in this RWD version.

As for charging, using a 7.4kW household wallbox will take ten hours to fully recharge the batteries. This drops to 38 minutes for an 80% charge if you can get access to a 100kW DC charger. 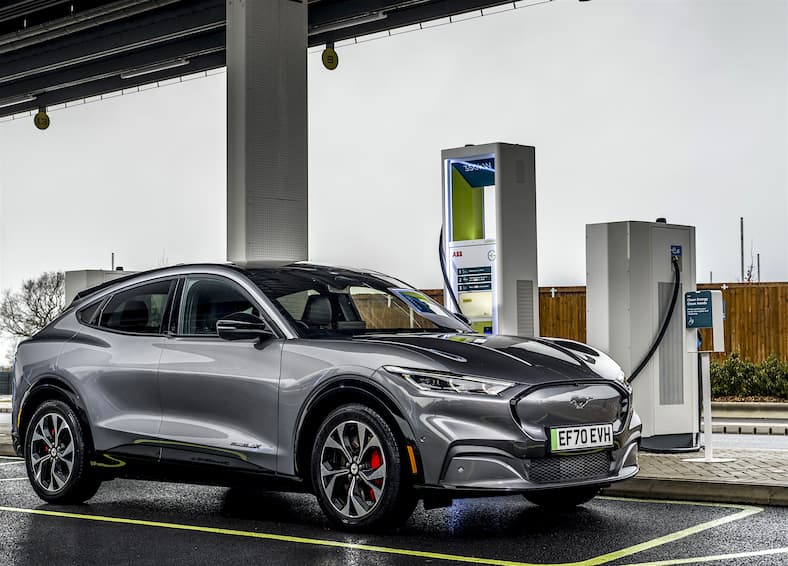 Anything else I should know?

Yup. It has a spacious 519-litre boot — including a false floor, ideal for hiding the charging cables — and stowage space can be increased to 1420 litres by folding down the 60/40-split rear seats. There’s also a 81-litre “frunk” — I know, a strange name, but it’s an American abbreviation of “front trunk” — under the bonnet.

It’s a great place for families, and there’s no avoiding the fact the fascia is dominated by a large 15.5-inch Tesla-esque portrait touchscreen. Though it can seem rather daunting at first, it’s hugely impressive in terms of performance. Not only is it ultra-responsive, but it’s easy to navigate.

There’s no getting away from the fact there’s an American feel to the cabin. The open-weave fabric seats are large and comfortable, and you sit up quite high, which is a real bonus in terms of all-round visibility.

The dashboard is quite sparse, which is actually quite attractive. Rear passengers get a bench seat which can accommodate three people, albeit the middle occupant will feel comfier if they have short legs; the centre console extends rather significantly into the middle passenger’s legroom. There’s also plenty of headroom in the back. 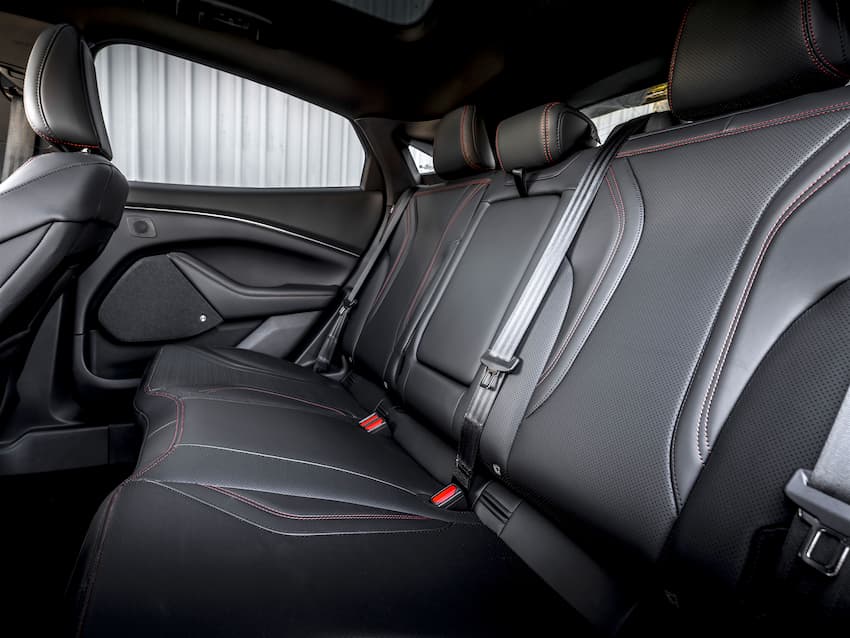 Right… how does it drive?

This might well be the entry-level, lowest-powered Mustang Mach-E, but it’s plenty quick enough. It’s eager to accelerate from standstill and — if you’re in the mood for it — can be quite darty. Both steering and brakes feel sharp.

And all that is achieved in the mildest of the car’s three driving modes: Whisper; Active; and Untamed. But while Whisper is good, Active is even better, and most probably the mode you’ll spend most time in. It delivers the most natural-feeling controls, plus you get some artificially-generated gravelly noises from the drivetrain.

As for Untamed? It’s good for a laugh and for impressing your mates — it includes a noise like a petrol V8, which is fed into the cabin through the speakers — but is probably best left alone.

Sitting on 18-inch alloys fitted with quite tall tyres, the ride can be a tad harsh at very low speeds if you’re negotiating large bumps and potholes. But everything improves dramatically as the speed increases; even at medium speed the damping really gets to work and delivers a smooth ride. 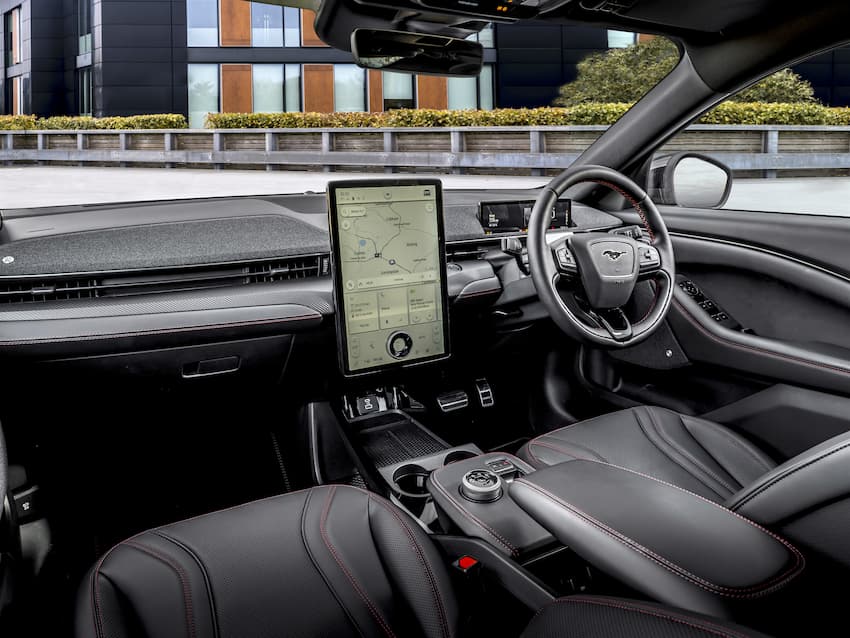 Does it have one-pedal braking?

Sadly, no. But you can use the central touchscreen to programme the level of lift-off braking you prefer and are comfortable with. It’s an impressive system which really allows the driver to recover braking energy.

And you mentioned standard kit…

I did. There’s the 18-inch alloys, plus LED lights, heated seats and steering wheel, as well as dual-zone climate control, a rear view camera, that 15.5-inch touchscreen and 10.2-inch digital instrument display, plus a wireless phone-charging pad, all included as standard. It’s certainly a little more premium than other Ford models.

There’s no denying Ford has achieved something of a cool, funky design for the Mustang Mach-E. An iconic sports car it’s not. What it is though is an EV which delivers a number of quirky design details, including the exterior door handles which have been replaced by a small button that opens the door when you touch it.

If truth be told — and it’s a completely understandable conclusion — the RWD isn’t the best Mustang Mach-E in the range. But then again, it’s £16,000 cheaper than the extended range all-wheel-drive version.

Factor in the cost, allied to the fact it has a perfectly acceptable range, is as fast as any family SUV has the right to be, is comfortable and capacious, as well as delivering quiet motoring for the whole family, and the Mustang Mach-E RWD is the near-perfect entry to battery-powered family driving. 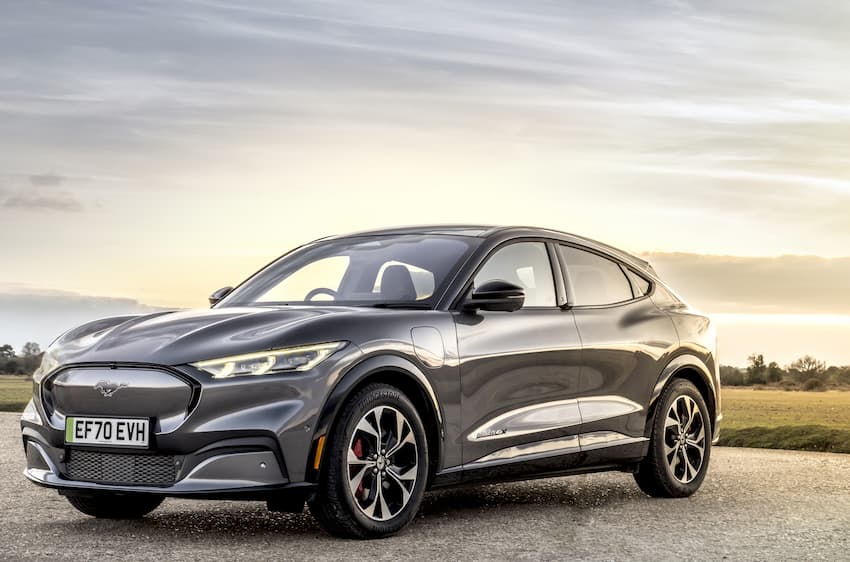