Coupés have always been popular. With no rear doors to accommodate, designers have more freedom to add a swooping roofline to make these cars look more stylish. Then SUVs came along and, very quickly, the popularity of larger vehicles exploded.

So why not combine them both? Volvo’s C40 is just that – the latest SUV to get a haircut - turning the roofline towards the back into something resembling a coupé.

And, in terms of how the C40 differs from its sister car, the XC40, that’s really as much as you need to know. There are slightly more athletic cosmetics and it's certainly an attractive and attention-grabbing car, but, by and large, a sloping roofline is the only significant change. 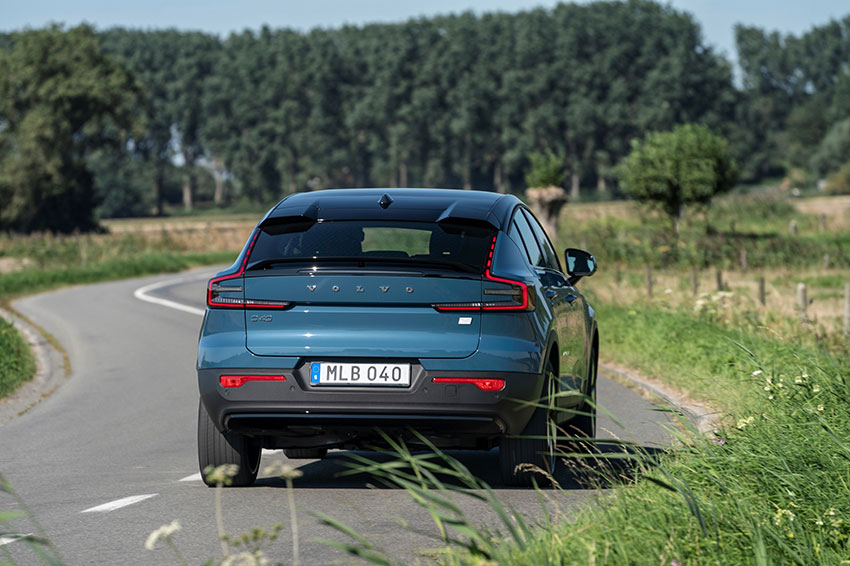 On the inside, Volvo’s mantra of ‘nothing for the sake of it’ is on show, with a posh-looking (and vegan-friendly) minimalist design. In addition, our test car included Fjord Blue trim, which really helps brighten things up. It also raised a smile when the Volvo representative informed us it’s technically an optional extra but available at no additional charge.

Rather than offer a system that supports Android Auto, Volvo uses an entire infotainment system designed by Google, which is excellent, quick, and user-friendly. It does bury specific settings within the system though, which complicates things when making adjustments on the move. But you do get Google’s voice assistant, which helps with this. Apple CarPlay is to be added via a software update soon.

There is just one trim available – Twin Pro – which comes with 20-inch alloys, keyless entry/go, dual-zone climate control, heated seats (electric, and with lumbar support, in the front), heated steering wheel, a sunroof and a wireless phone charger. Then there’s the Google-based infotainment system along with a 12.3-inch digital instrument display and a smaller nine-inch touchscreen, plus a 360-degree camera and a powered tailgate.

Thanks to a heat pump, the car also warms up quickly when you get in. 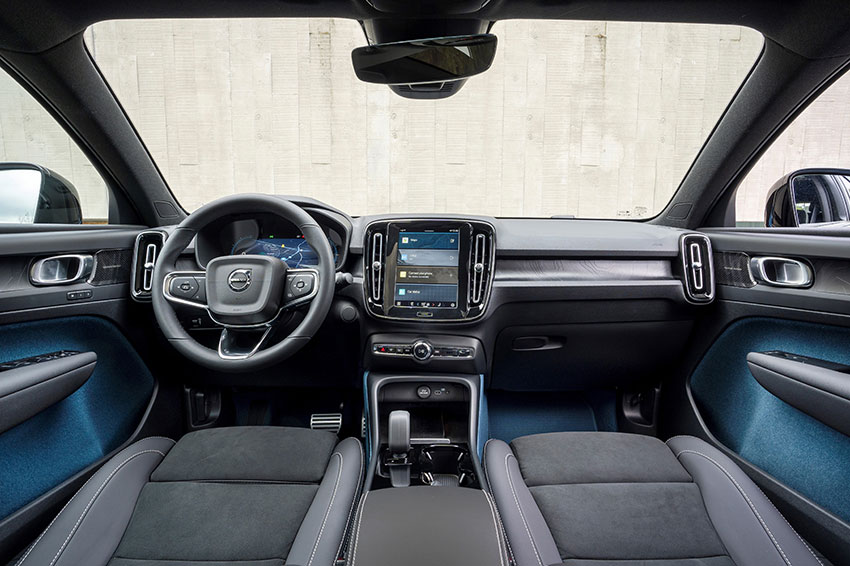 There is also just one powertrain available – it comes in the form of two electric motors, which combine to produce a total of 408PS with four-wheel drive (a less powerful two-wheel-drive version is expected later). It also comes with a 75kWh battery – that’s enough to officially get you 273 miles on a full charge, although expect a little less than this in the real world.

The battery will take around 12 hours to charge up using a home 7kW wall box, while a 10 to 80% charge can be achieved in under three-quarters of an hour via a public 150kW charging point.

If you floor the C40 off the line, you’ll most likely leave any other car in the dust. The car is lightning quick, getting from zero to 62mph in 4.7 seconds. Sure, there are faster, swifter cars than this, but its pace zips beyond anything you might expect from a Volvo SUV.

Once you learn to control the throttle, you’ll still find it easy to drive in all conditions, though, including at low speeds.

Not only that, but one-pedal driving is also possible due to its regenerative braking. This technology can slow the vehicle to a stop when turned up fully, using the energy generated under deceleration to add charge back into the batteries. It does take a bit of getting used to, but it’s a valuable tool for those who want to ensure optimally economical driving.

The prominence of lumps and bumps in the road is intensified by the C40’s large wheels, especially when travelling slowly. Nevertheless, the Volvo comes with an absorbing suspension set-up, which only increases in comfort as the pace gets brisker.

The handling is geared towards comfort rather than sportiness, with very light steering, making it less engaging to drive. However, there is a decent amount of grip, and while body roll in the corners is noticeable, it’s not particularly significant. Wind and road noise are kept on the down low thanks to the bodyshell and windows being well sound treated.

There is a bountiful amount of legroom in the front and back, although, naturally, the sloping roofline limits rear headroom, not to mention rear visibility. 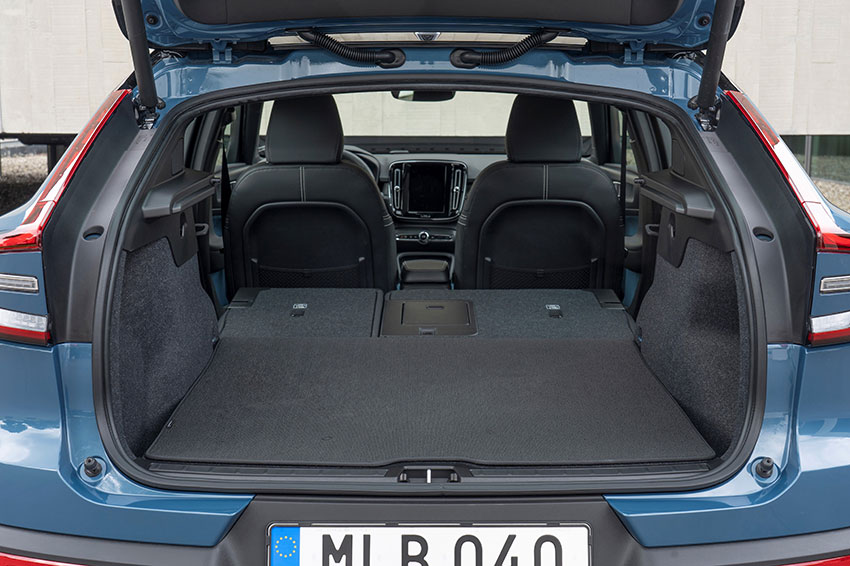 Opening the C40’s tailgate is easy. You just wave your foot underneath the rear, and it opens by itself, revealing a capacity of 414 litres, which increases to 1,205 litres if you put the rear seats down – they fold away in a 60/40 split. You can get just over 30 litres of storage under the bonnet, too.

The Volvo C40 hasn’t been crash-tested by Euro NCAP yet, but the near-identical XC40 scored very highly indeed, easily attaining a five-star rating.

Volvo has always had a solid reputation for safety which dates back decades. As a result, you also get a considerable amount of safety kit as standard, including, but not limited to, pedestrian/cyclist detection, collision warnings, emergency brake assist, lane-keep assist, and blind-spot assist. 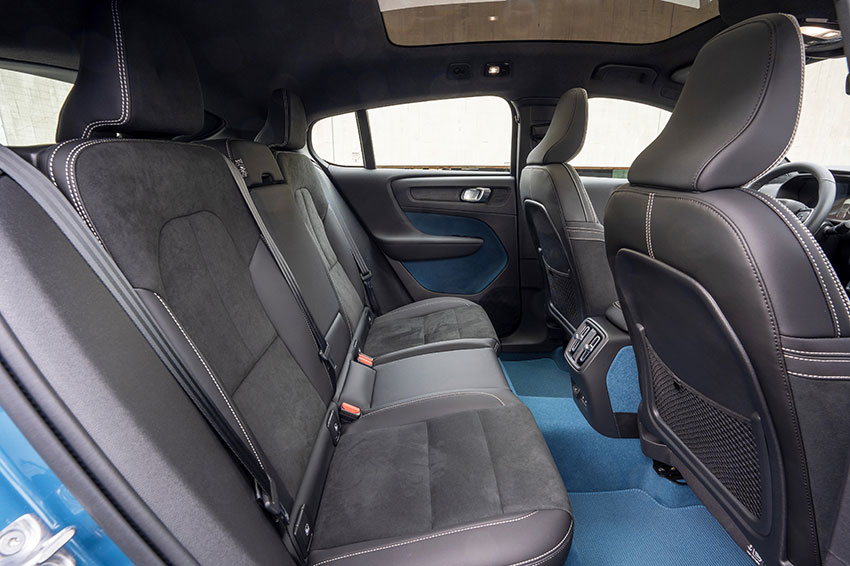 There are rivals out there, such as the Ford Mustang Mach-E and the Audi Q4 e-tron Sportback. Both have greater range and bigger boot space. The ŠKODA Enyaq also offers more room and a similar range – and it's much cheaper. Nevertheless, the Volvo C40 is utterly excellent.

The all-electric model is rapid, comfortable, and cheap to run. The car also boasts a classy, attractive interior and houses enough tech to keep you occupied for weeks on end.

While the C40’s savage acceleration will excite, some may feel it’s excessive, especially as it isn’t especially sporty to drive. Some competitors offer a more athletic handling experience – and, as mentioned, better range.

However, you will struggle to find anything better than the all-electric Volvo C40 Recharge in terms of refinement. 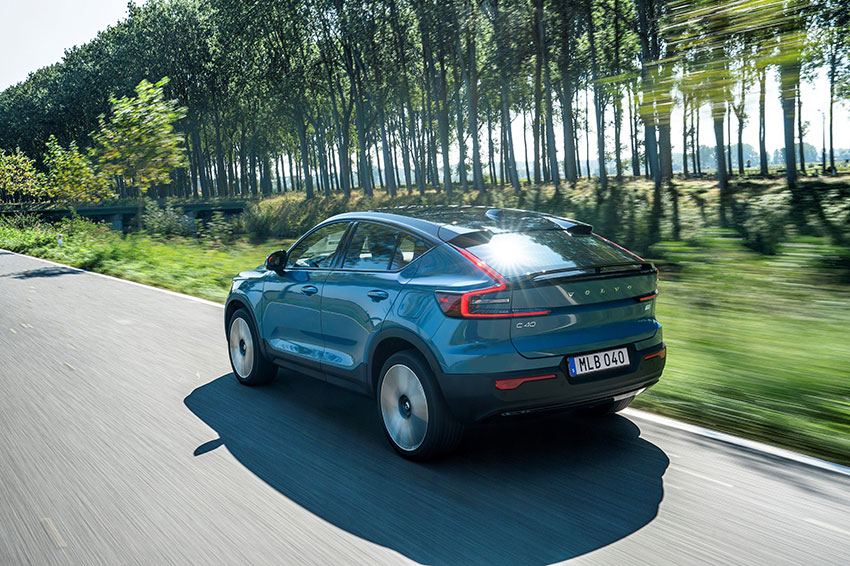