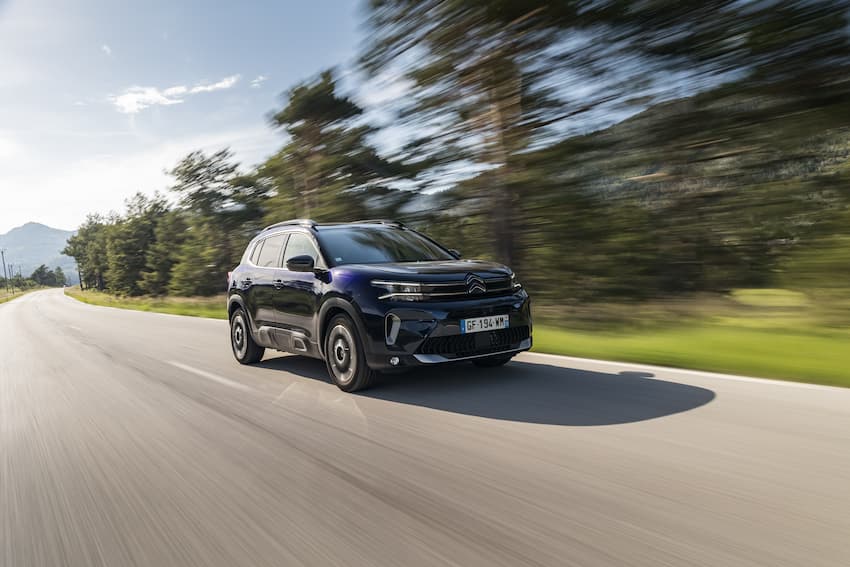 Citroën’s mid-size SUV, the C5 Aircross, has been given a makeover, with a more imposing body and an overhauled interior.

But, following Citroën’s integration into the newly-formed Stellantis group, it should promise an upturn in its quality. So, does it deliver?

Well, the Citroën is attractive. While it still looks quite rounded, as its predecessor did, it also appears sleek, energetic, and adventurous. This is helped by the cladding surrounding the bottom of the bodywork, which gives a rugged appearance as though the car wants to be taken off road.

That is unlikely in practice, given the C5 Aircross is only front-wheel drive. But looks count and the French car certainly delivers in this regard. 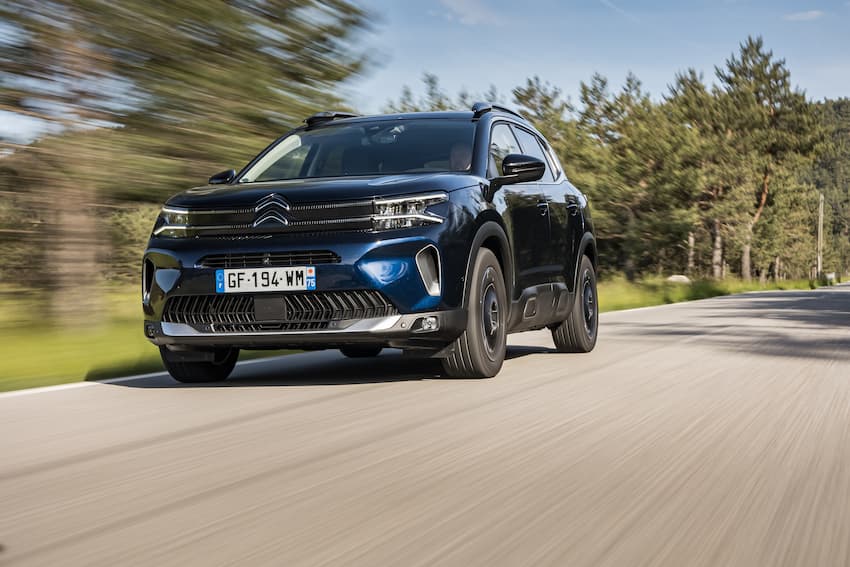 Unlike the non-hybrid versions, the entry-level Sense Plus trim isn’t available with the plug-in hybrid electric vehicle (PHEV). So that means the bottom rung of the ladder is the second trim up: Shine.

Eighteen-inch alloys are included, along with a 12.3-inch digital instrument cluster and a 10-inch infotainment screen. A reversing camera, dual-zone climate controls and a dark chrome colour pack are also thrown in.

Alternatively, you could opt for the top-of-the-range C-Series Edition and enjoy 19-inch wheels and an ‘anodised bronze’ colour pack instead, along with a black roof. This shadowy covering contains a panoramic glass sunroof (complete with an electric blind) plus half-leather upholstery. 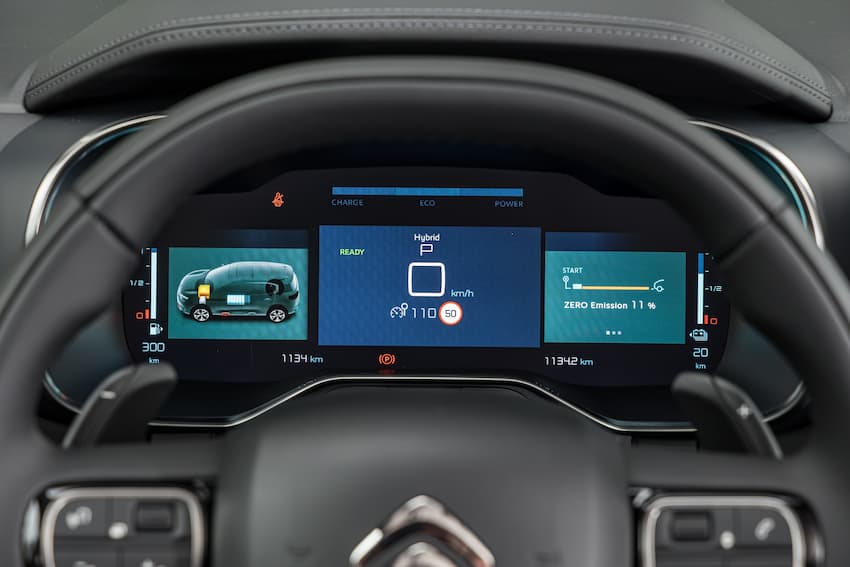 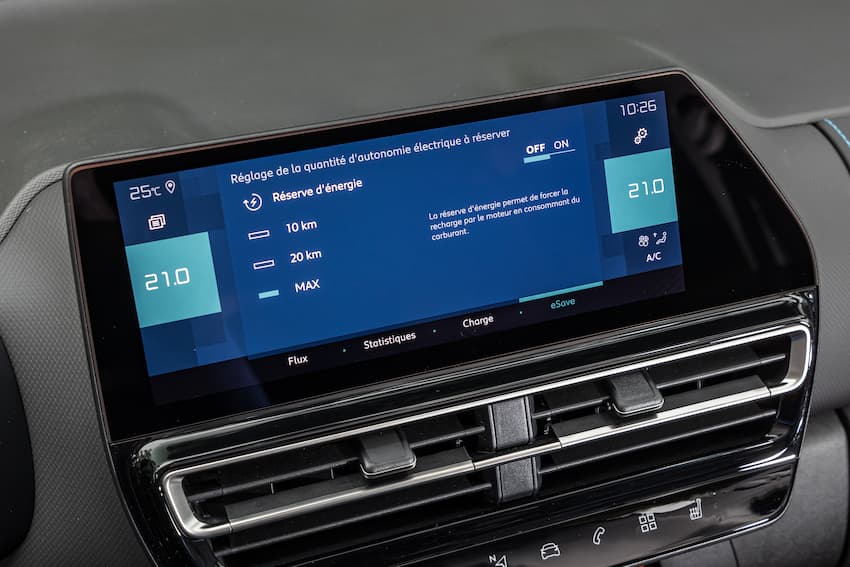 My test car was the C-Series Edition. It comes with the only powertrain you can choose with the hybrid version: a 1.6-litre four-cylinder turbocharged petrol engine connected to an electric motor, producing 225PS.

It is reasonably brisk, getting from nought to 62mph in 8.7 seconds, although it feels nippier, as indicated by its impressive top speed of 140mph.

There is plenty of potency in reserve in just about every scenario, so it’s equally as quick to pick up speed when you’re already on the move and need to overtake. The performance is helped by the smoothness and refinement of the eight-speed automatic gearbox.

The engine is hushed at all speeds, although around town, the Aircross is capable of driving on its electric motor only. A total of 38 emission-free miles are possible until its 13.2kWh battery is spent.

When the engine is summoned, it switches itself on almost imperceptibly, seamlessly involving itself in the propulsion as needed. Despite its somewhat powerful figures and athletic looks, neither of these attributes are particularly well reflected in the Citroën’s handling. 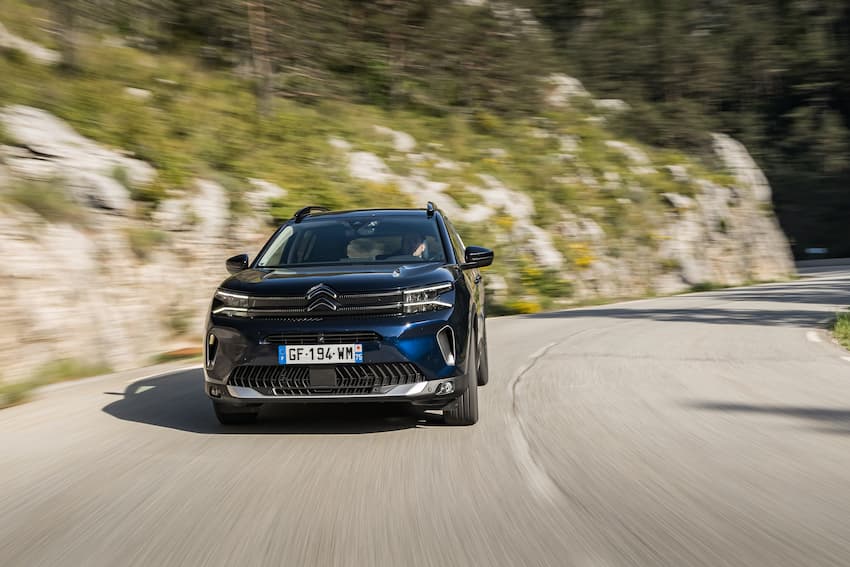 The steering is light, which is great around town, but try to go quickly on a winding B-road and it barely firms up, even when the car is put into Sport mode.

As a result, the feedback is minimal, so high-precision driving at speed isn’t really possible. And it's challenging to have fun in the Citroën, despite a decent amount of grunt from the powertrain.

The ride comfort is good, but it isn’t the best I’ve experienced, either. The Aircross feels very settled at pace, but it's prone to jolting around at lower speeds when the road surface gets uneven or if there are ruts. 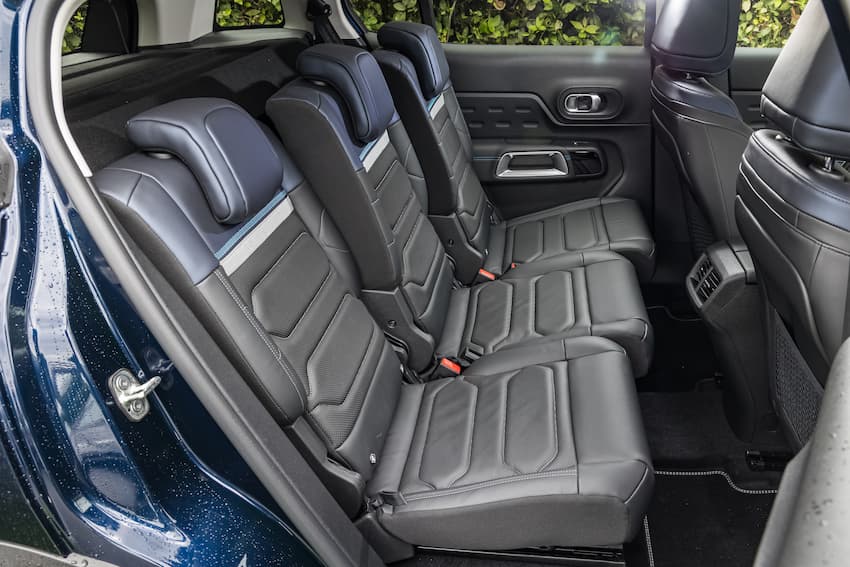 Citroën says you can get up to 222mpg and produce just 32g/km CO2. But you’ll need to be charging the Aircross each night to ensure you can take advantage of the fuel economy. So, expect fuel consumption figures around the mid-30s once the battery is emptied.

Charging is a very slow 6.6kW (some cars can handle 350kW charging), but it’s not much of an issue in practice as the battery is small. So, a top-up takes a couple of hours and will, in most cases, be done at home via a 7.4kW wall box.

The small CO2 figures mean the government is happy to give you the first year’s road tax for free. And company car drivers may be drawn by its low benefit-in-kind band, at 12 per cent. However, that’s still no match for all-electric cars. 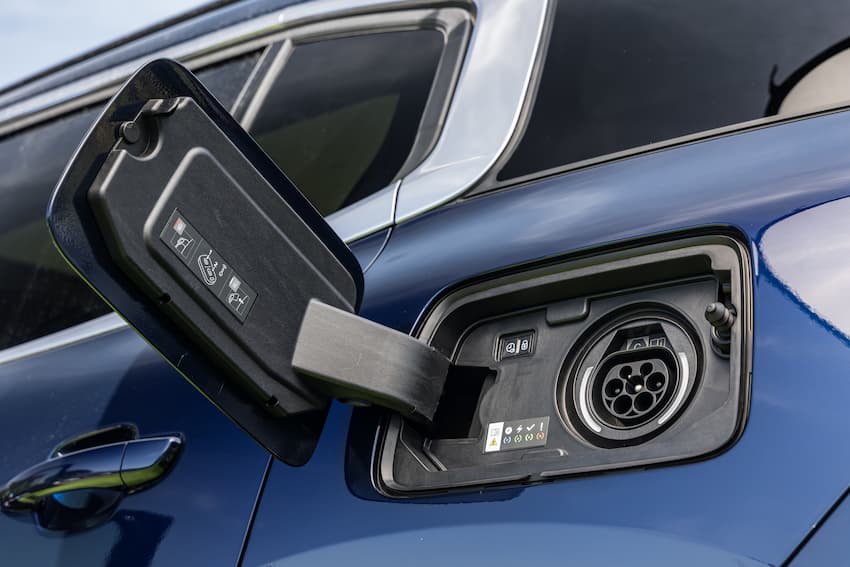 The new C5 Aircross’ low running costs should help save you money if you need to fix any problems. Reliability is not Citroën’s greatest strength, although the engine in the Aircross is used in other Stellantis vehicles. Consequently, it’s already well tested and will likely lead to an increase in dependability.

A three-year warranty is offered as standard, unlimited for the first two years but reduced to 60,000 miles in the third year, while the battery system has an eight-year, 100,000-mile guarantee.

Safety-wise, Euro NCAP probably won’t crash-test the new C5 Aircross. But the older one earned a four-star rating (five stars once an optional Safety Plus Pack was added).

Overall, the Citroën C5 Aircross Plug-in Hybrid is a step forwards on the last one and will satisfy the criteria of many for what they’re looking for in a mid-size SUV. 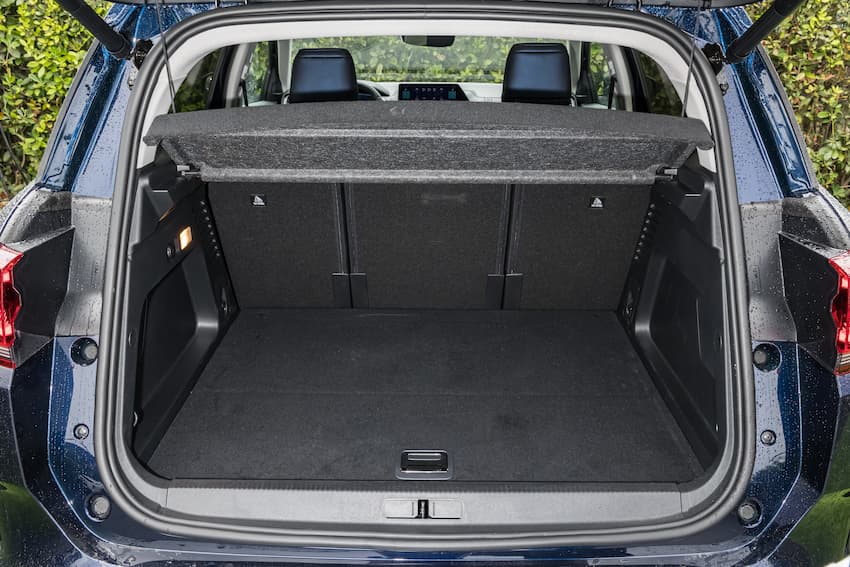 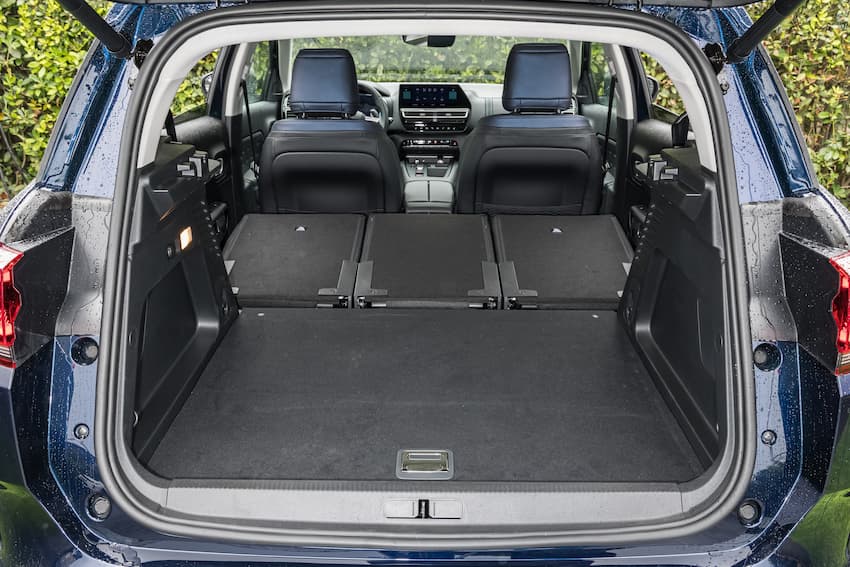 Its spacious boot means it’s practical, as does the individual three-seat layout in the rear. At the same time, the ability to fold down each seat separately means it’s more versatile than most cars, should you need to transport several passengers or some longer or bulkier items regularly.

Getting 225PS is notable, too, especially when you consider the fuel economy and lack of emissions, as long as you remember to top up the batteries.

Those who want keener handling should perhaps think carefully, though. The Aircross defies its own sporty, athletic charm with its very light steering and lacklustre agility. However, in fairness, few hybrid SUVs at this price point are likely to be significantly better.

Whether you should buy this or the non-hybrid depends on your annual mileage and to what extent you’ll recoup the higher purchase price back through fuel savings over the lifetime of your ownership.

There are better cars of this ilk, but 2022’s C5 Aircross certainly has a lot in its favour. 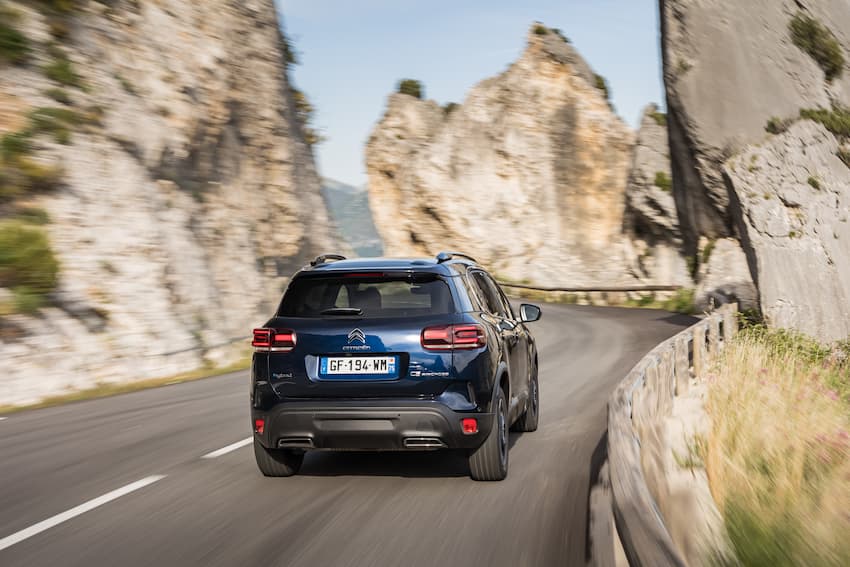