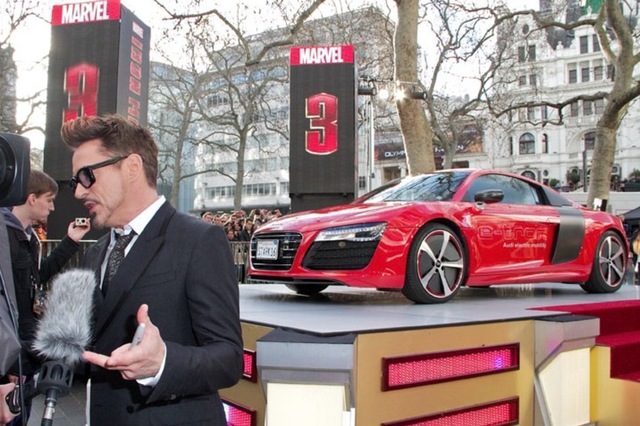 Audi has announced that the R8 E-Tron featured in the upcoming film will be brought to the market in 2013. Image: Audi

When Iron Man came out in cinemas in 2008, car lovers were treated to a super-car frenzy as the film showed us inside reckless playboy and electrical engineer, Tony Stark’s garage. From then on, the films have not disappointed, and with the new film coming out in April, we thought we’d take a look back at the motor candy the Iron Man series has offered us. 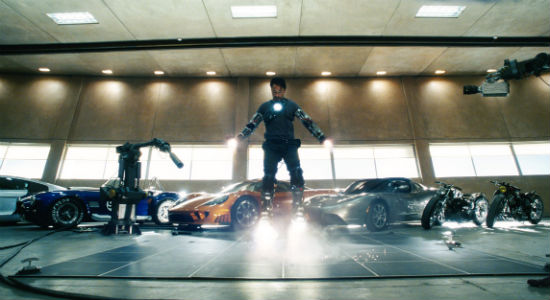 Fans of cars and the superhero will remember the scene where we got a glimpse of Tony Stark’s garage. The impressive collection included five super cars:

1932 Ford Flathead Roadster – belonging to director Jon Favreau, this car was Tony’s restoration project. After the crew genuinely removed parts of the car in order to make the work look authentic on film, we’re guessing Favreau started to doubt his generosity!

1967 Shelby Cobra – There was an unmistakable ‘ouch’ moment for car lovers all over the world when this car receives the brunt of a crash landing in the film. This Shelby hits 0-60 in about 4.5 seconds.

Saleen S7 – Despite not getting much screenplay, the bright orange paint and curvy silhouette mean the Saleen doesn’t fail to get noticed in amongst it’s big hitting super car rivals.

Tesla Roadster – These cars were merely a prototype when Iron Man came out, Stark’s interest in the car probably stemming from the technical advances, as this car boasts a 248-hp (185-kW) electric motor.

2008 Audi R8 – Stark’s daily choice. It hits the 0-60 mark in about 4.6 seconds and features an aluminum and magnesium space frame; perfect for popping to the shops…

An invitation back into Stark’s garage in Iron Man 2 did not disappoint, with Favreau lending his ’32 Flathead Roadster to the set again, alongside some new beauties: 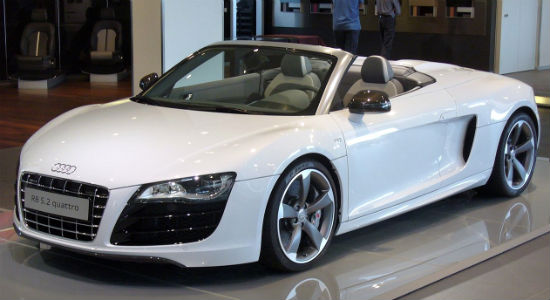 The Audi R8 Spyder – Making its first appearance 10 minutes into the film, the Spyder becomes one of Stark’s main cars throughout the film. Despite being capable of 0-62 in 4.1 seconds with a top speed 194 mph; the car had to be recalled in 2011 because of fuel leaks that could cause engine fires.

Rolls Royce Phantom – Stark goes classic. Rolls Royce made a first for this film by producing two identical cars (a rare undertaking, as the cars are handmade). What did Iron Man 2 do with these almost-half-a-million-dollars-a-piece cars? Destroy them! (Sigh) 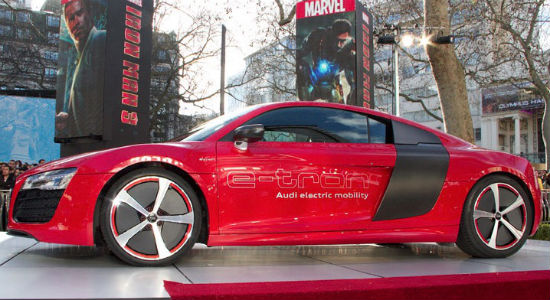 Audi’s long term partnership with Marvel is set to continue, with a recent commercial from the German manufacturer showing Robert Downey Jr as Tony Stark driving the company’s new electric version of the Iron Man favourite, the R8 supercar. The E-Tron, aided by four electric motors (one above each wheel), gives an immense power, with 3,614lb ft of torque, which, for the less technically savvy among us, equates to… rather a lot. Audi has announced that the R8 E-Tron featured in the upcoming film will be brought to the market in 2013.

Fans wanting to see Stark return in the NSX Acura hybrid that showed up in ‘The Avengers’, may be disappointed in the return to Audi. However, though the impressive selection of cars in the Iron Man series is set to continue, so is the wonton destruction!

In true Iron Man style, the car isn’t set to last long, with the trailer revealing its untimely demise.