Arnold Clark Aberdeen Toyota has serviced and prepped cars ahead of delivery to local business fleets, as part of a government initiative to increase the number of hydrogen-powered cars in the UK. 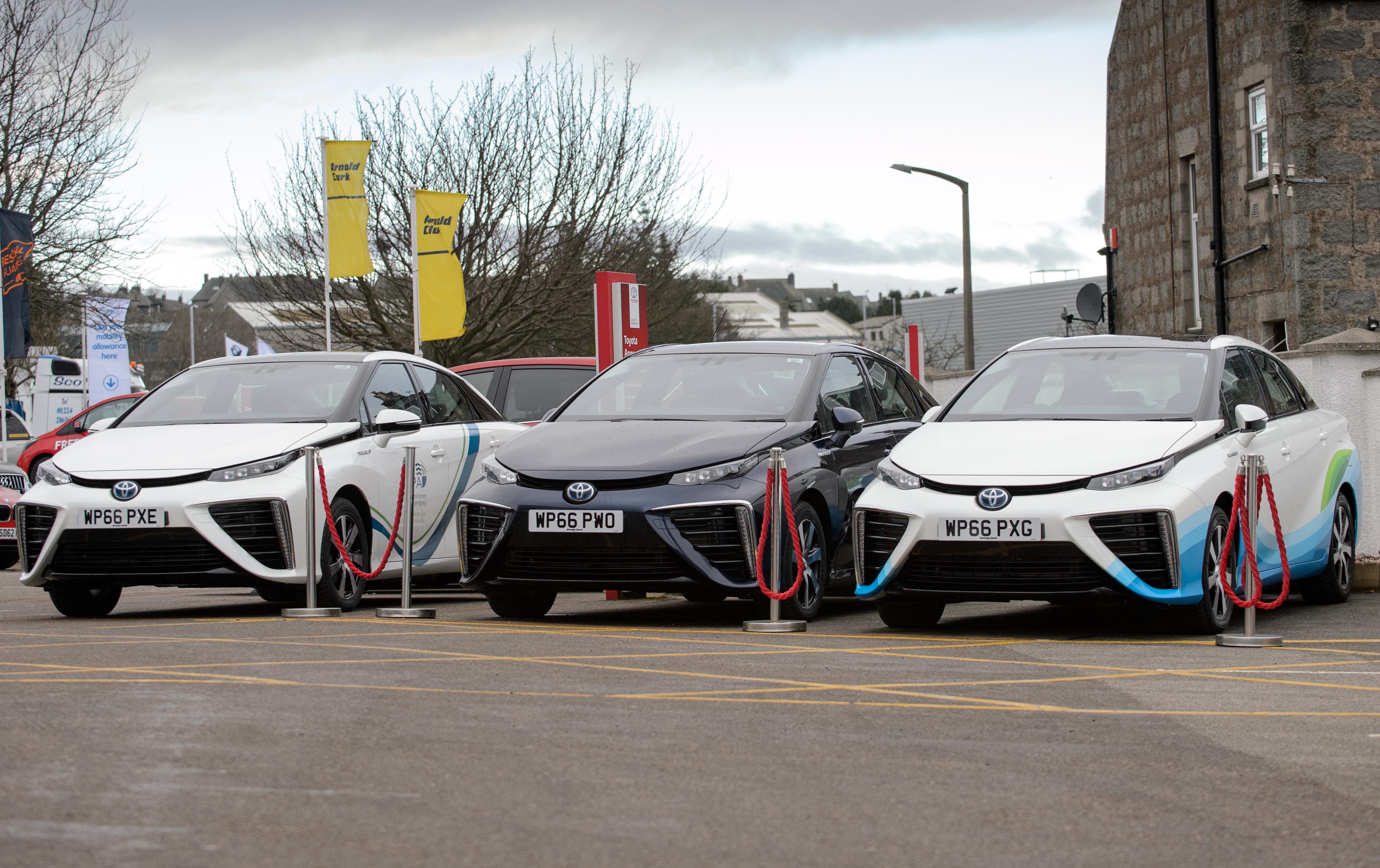 The move follows the UK government’s announcement of a £2m fleet funding support initiative in May last year, which encouraged more businesses to switch to hydrogen-powered vehicles.

The initiative will bring 20 hydrogen cars to UK roads this year, 10 of which were sent to our Aberdeen Toyota branch to be PDI’d, serviced and fitted with winter tyres before delivery to local business fleets. Some of them were then wrapped in custom livery before being delivered to their new owners.

Aberdeen Toyota will now be a key branch for these early adopters, as it becomes just one of two UK centres with the facilities and trained staff to service the vehicles, with the other in Edgeware, London.

What are hydrogen-powered cars?

Hydrogen cars are powered by (you guessed it) – hydrogen! More specifically, they’re powered by something called a hydrogen fuel cell.

The fuel cell works by converting hydrogen and oxygen atoms into electricity, which in turn powers the car’s engine.

As a result, they don’t emit any carbon dioxide (CO2), only water. This makes them an ultra-low emission vehicle (ULEV).

The Toyota Mirai was the first production, hydrogen-powered vehicle.

Andy Evans, pictured below (left), is one of only a handful of master technicians who have been trained to work on the Toyota Mirai.

Speaking about learning how to service these impressive vehicles, Andy said:

‘It was great to able to learn how to work with this new technology. The main difference in servicing these cars is that they don’t have any engine oil but otherwise they’re quite similar to ordinary cars, as they still use things like air filters and brake fluids.’

‘We’re extremely proud to have been picked to champion hydrogen fuel cell servicing in Scotland. Ultra-low emission vehicles are the future of motoring, and it’s great to be involved in this clean fuel initiative. Working with Toyota to train staff at the branch and prep the cars has been a real privilege, and we hope the NHS, SEPA and Aberdeen City Council are as excited as we are to get these fantastic cars on the road.’

Aberdeen has the most robust hydrogen infrastructure in the UK. Spearheading the ultra-low emission vehicle movement, the city was the first to open a hydrogen production and bus refuelling station back in 2015.

With its worldwide reputation in the energy industry and a clear Hydrogen Strategy (H2 Aberdeen), it’s easy to see why Aberdeen was picked to pioneer the UK Government’s hydrogen initiative.

One of the first UK Toyota Mirai customers, Theo Etrue-Ellis, talks about what it’s like to drive a Mirai.

Hydrogen fuel: The future or a passing phase?