Tim Barnes-Clay took a trip to Croatia to test the all-new Toyota Camry. 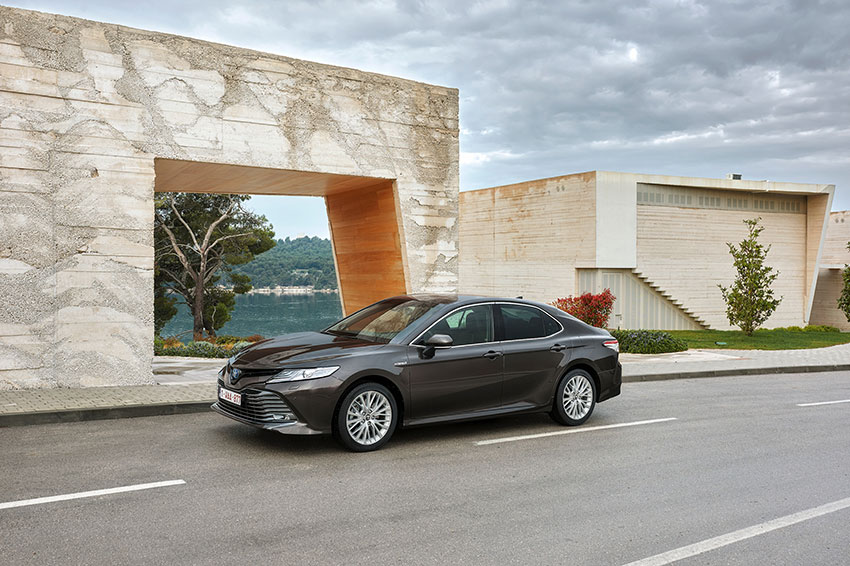 The return of the Toyota Camry

The Toyota Camry is a bit of a rock star. Despite a decade and a half’s absence from Europe, it’s continued to draw big crowds around the globe and remains a big hit in the USA.

Since its launch in 1982, 19 million of these models have been produced and sold. And guess what? It’s out with the Avensis and in with the Camry. That’s right, Toyota’s big saloon is coming back to the UK.

The Japanese automaker reckons its new hybrid powertrain, slick styling, premium features and decent handling make it the right car at the right time to come to the United Kingdom.

So, the question is, is the all-new Camry a credible alternative to the excellent ŠKODA Superb? A car Toyota would be happy for it to equal – or, preferably beat.

Well, the Camry is pricey, I must admit – but look a little closer at what you get for your money, and the £29,995 starting price seems pretty reasonable, particularly when you realise how cheap it will be to run in the real world. 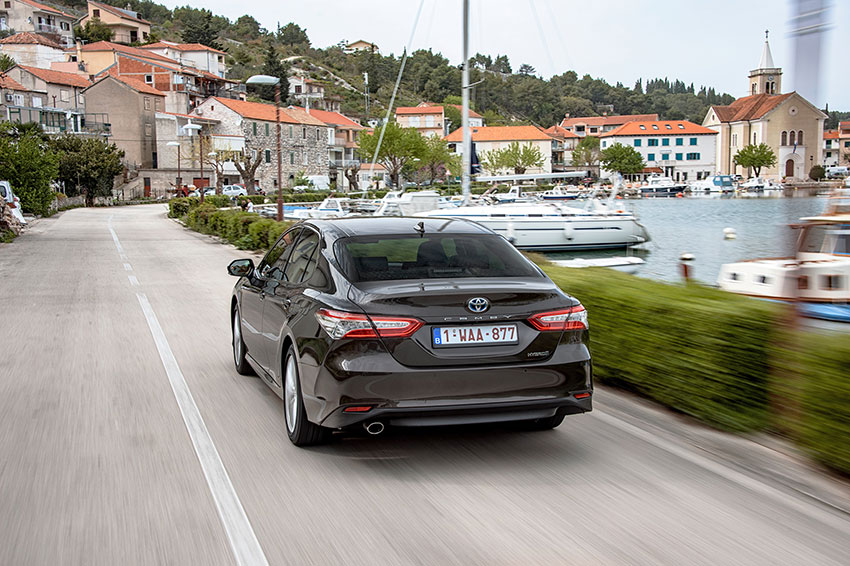 Toyota anticipates that 80% of British models will end up in the hands of fleet purchasers. And that seems feasible when you consider the basic Camry’s 23% Benefit in Kind rating blows the comparable ŠKODA Superb 2.0-litre TDI’s 30% BiK out of the water.

The fresh Camry is a little more miserly on the miles to the gallon front, but subject to your manner of driving and day-to-day commute, its capacity to travel short distances (on average, under a couple of miles) on pure electric power could have an astonishing impact on urban driving efficiency.

It’s at this point that Toyota’s Camry really comes into its own. It’s so tranquil when driving around town; it’s almost like going to a spa. But don’t let the smooth ride fool you, the car’s commanding electric motor provides excellent performance and immediate throttle response.

Looking for something smaller? Read our Toyota Corolla review.

It is easygoing to drive, with precise, light steering and good visibility. And those accustomed to the last-generation Prius – or any other continuously variable transmission (CVT) hybrid – will be delighted to note that the Camry suppresses much of the loud wail so often linked with this kind of powertrain. If you are heavy with your right foot, the revs climb, but it’s a quieter and more refined experience than before. Furthermore, there is enough clout from the collective 218ps that you rarely need to go full throttle.

Alas, it’s very common for hybrid and electric cars to let themselves down when it comes to high-speed refinement. The unobtrusive engine in the Toyota means your hearing becomes bat-like – and you start to notice other sounds instead. Tyre roar begins to become more obvious, as does the wind whistle. But it still doesn’t make the Camry a car you can’t get on with on the motorway. You simply need to crank the music up a notch when driving at 70mph.

Building the Camry on the firm’s established TNGA platform has worked miracles for the handling and ride. Toyota’s engineers needed the model to provide natural and confident handling, and they’ve achieved that. It might not quite match the sharpness of the Vauxhall Insignia, but the Camry offers heaps of grip, and it steers deftly. Additionally, the car’s suspension achieves a delicate balance between suppleness and comfort. 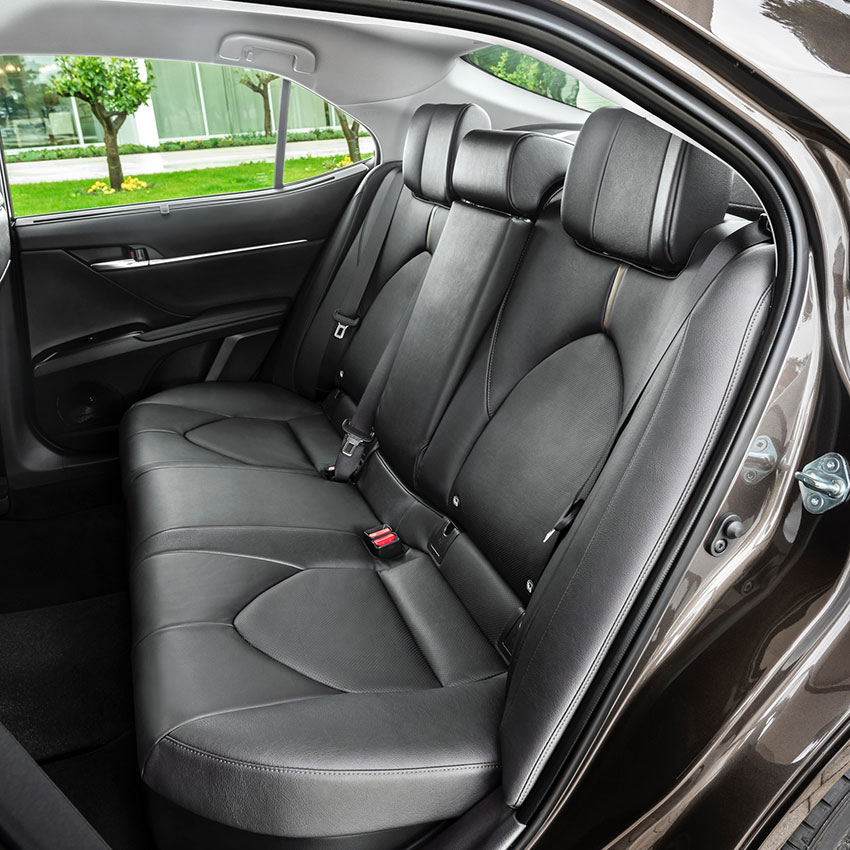 There is no side-stepping the fact that a big saloon like this will be snapped up by taxi firms and private hire companies. And if you were given a lift in a brand-new Camry, you might be a little disappointed by the space in the rear seats. There’s enough head and legroom for a couple of six-footers to get comfy but it’s not nearly as roomy as the ŠKODA Superb. You could get three in – but I wouldn’t want to be the person in the middle. The seats are supportive, and every Camry gets leather throughout.

Toyota has made the Camry’s boot relatively large, too, although unlike its challengers, no Touring Sports estate is currently planned. With a cargo capacity of 524 litres, there is ample space, and even more when you fold the back seats down.

The Camry’s shortcoming is the infotainment system. It is awkward to operate, and the considerable glass touchscreen panel on the dashboard is surprisingly unresponsive when you tap it. There are plans to add Android Auto and Apple CarPlay functionality in due course, but this technology won’t be offered at launch. 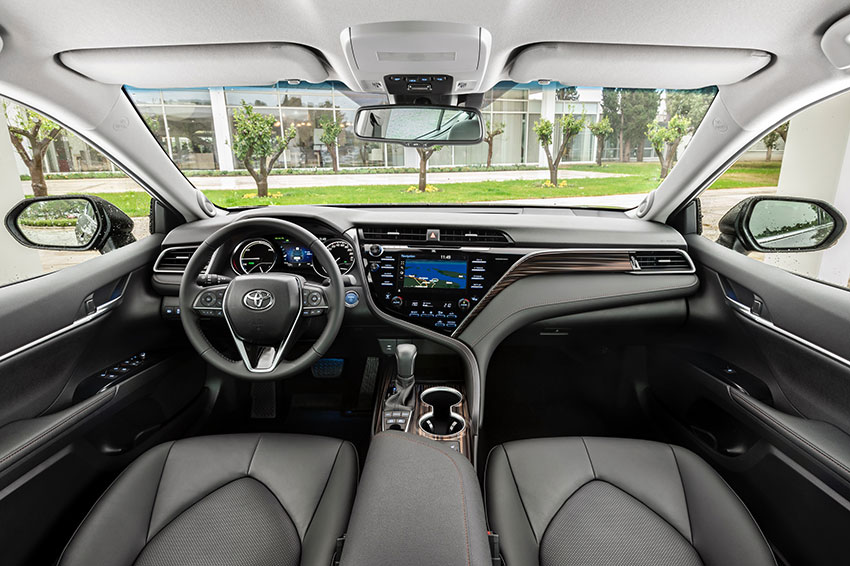 For anyone who sits behind the wheel for hours on end every day, this might be the one thing that strikes the Camry off their shopping list.

Fortunately, you won’t be let down by the standard equipment. There is a lot of it, and only a couple of trims to go for. The Design version of the Camry costs £29,995, and the flagship, fully-loaded Excel will lighten your bank balance by a further £1300.

Move up to the Excel, as driven at the media launch in Croatia, and you will find wireless phone charging and LED fog lamps – as well as a bunch of additional safety tech, including Rear Cross Traffic Alert and a Blind Spot Monitor. One thing to note about the flagship Excel though is that it has 18-inch alloys, resulting in a BiK hike of one per cent.