Jim McGill gets a preview of Mazda’s first all-electric car. 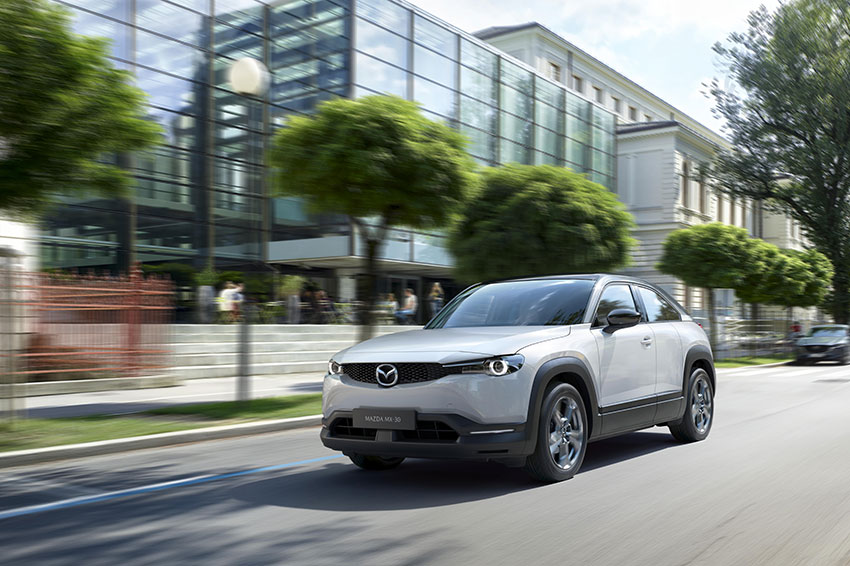 The left-hand drive prototype for Mazda’s first mass production electric car, the MX-30, arrives at Arnold Clark showrooms this October to give customers a sneak peak. And while the rest of the industry will have to wait for first reviews of the car, we’ve driven the prototype.

The all-electric MX-30 combines a city car and SUV, and its stylish and innovative design lines – including its versatile ‘freestyle’ doors – ensure it’ll be something of a head turner when it hits UK roads in March 2021.

Unveiled at the Tokyo Motor Show, the MX-30 illustrates how Mazda is planning to deliver a completely different take on the electric car.

And while the design model – it’s the same one-off model which was shown at Tokyo, so understandably there was always at least one ‘minder’ making sure no one as much as breathed too heavily on it, let alone touched it – stood proudly inside the presentation hall near Lisbon, outside I got a first experience of the driving technology.

Ok, so what exactly are you driving? 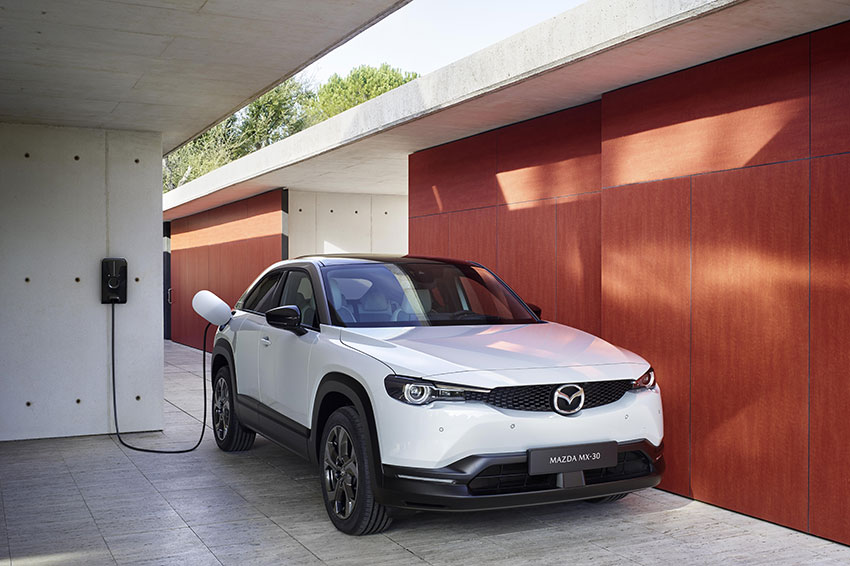 This is a clever, swish-looking prototype. There are three of them; two are here in Portugal, the other still in Japan… so you can only imagine how much each is worth. I asked. I received a knowing smile and: ‘They’re very, very expensive.’ Enough said.

Looking futuristically cool in its matte black with gloss decals, the car I drove is essentially the body and chassis of a CX-30 with all the new EV’s e-SkyActiv technical wizardry and powertrain tucked away in its guts. Sharing the same underpinnings and almost identical dimensions meant taking this prototype for a drive ensured a good insight into the handling of the MX-30.

It’s no coincidence that the new EV has the MX nomenclature. Thirty years ago Mazda introduced it with the MX-5. Today, according to Mazda, the MX-30 has been ‘engineered to again challenge automotive philosophy, which is exactly what we did with the MX-5’.

While other manufacturers are focusing on installing bigger, heavier and more powerful batteries into their EVs, and increasing range, Mazda is taking a completely different approach.

The MX-30 uses a relatively small 35.5kWh battery, similar to the titchy Honda e. That means the range will be 200kms, or 124 miles in real money. Maximum output is predicted to be 140bhp. Importantly, Mazda believes the battery size is the sweet spot for EVs in terms of CO2 emissions, both in production and everyday use.

Go on then; what was it like to drive? 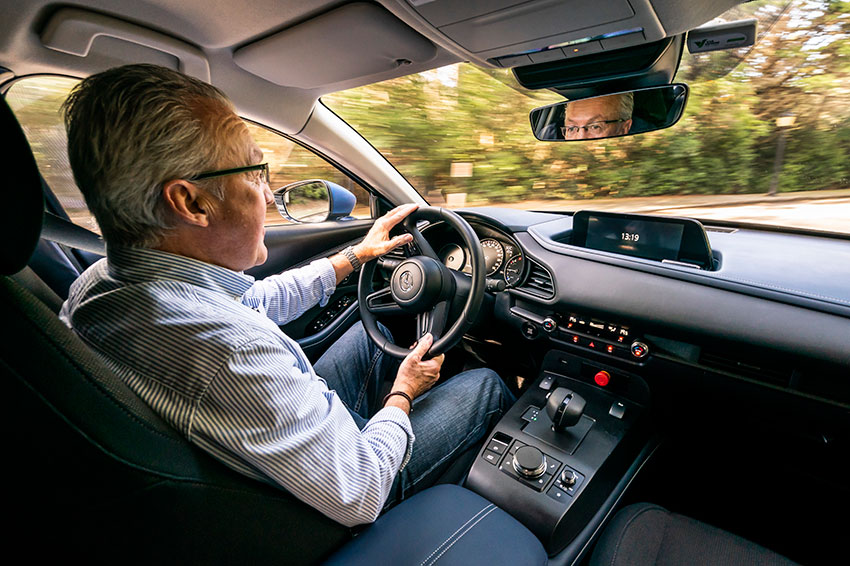 Impressive. The immediate feeling was that it handled exactly the same as any other Mazda; sporty, direct, intuitive and enjoyable. But more important is the torque map which has been chosen for the MX-30.

While other EVs deliver their power often in a big lump, the Mazda system is more refined. The ease of the power delivery means you get a real, honest feel for the car in terms of communication, placement and power delivery. Here we should return to the ethos of the MX-5. You don’t need to be going fast to have fun and enjoy it. The soft-top’s appeal is the combination of feedback and predictability. And that’s exactly where the MX-30’s powerplant shines.

Despite tipping the scales under two tonnes, on the hilly route west of Lisbon it was possible to modulate the throttle to accelerate out of corners as they opened up, and increase the pace in a smooth way in which many other EVs aren’t capable as they pile on the torque delivery.

But is it quick?

It is – and it’ll be even quicker. And not only was it quiet, but it was incredibly stable under ‘swift’ cornering (not too swift, mind you, as I had a Mazda ‘tech bod’ sat next to me ensuring I didn’t do anything too silly with her ‘very expensive prototype’). That stability and rigidity – the EV platform is actually more rigid than the CX-30 – comes as a result of a ring around the skateboard-placed Panasonic batteries which has been bolted to the full width of the underside of the chassis.

And the ride? Smooth as smooth can be, even over a lengthy stretch of Portuguese cobbles. It may be a prototype, but it already looks like Mazda has nailed the suspension. 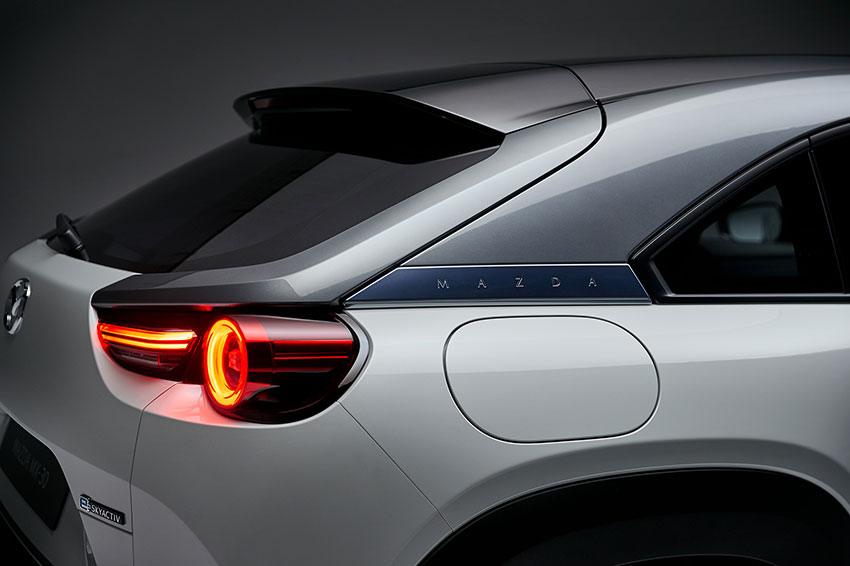 Yes and no. Mazda has intentionally introduced an artificial sound to indicate acceleration or deceleration; in practice it works well. The boffins are still fine-tuning it, and debating whether to introduce an ‘on-off’ button for those who prefer total silence.

Of course, as is the case with all EV driving, coasting and regen will become a factor. While the final production car will be fitted with paddles behind the steering wheel to increase or reduce the regen rate, ours was hardwired to the most common, everyday use setting.

Mazda says the MX-30 will be capable of being recharged from 10% to 80% in 3-4 hours on a standard charger. This will plummet to around 30mins on a fast-charger.

The really intriguing prospect is marrying this electric powerplant and handling package, with the innovative and adventurous design of the MX-30. With its ‘freestyle’ doors, five seats, sizeable boot space, architectural front-end, ‘vegan-based leather’ and cork-infused interior, the MX-30 is set to have a noticeable impact on the EV market.

Orders can now be placed ahead of first deliveries in early 2021. Twelve months or so after that, the Wankel-powered REX MX-30 range-extender version will arrive, if you want more EV range

There’s a common-sense approach to Mazda’s interpretation of the need for EVs. Most families nowadays aren’t restricted to one car, with the majority having two, or even three cars. As the industry morphs into new technology and powerplants, it’s logical to have a mix on your driveway. An ICE car for weekends and longer journeys, and an EV for daily use which can be conveniently recharged at home overnight.

Mazda rocked the automotive industry 30 years ago with the MX-5. It might well be poised to make an equally big impact with the MX-30. 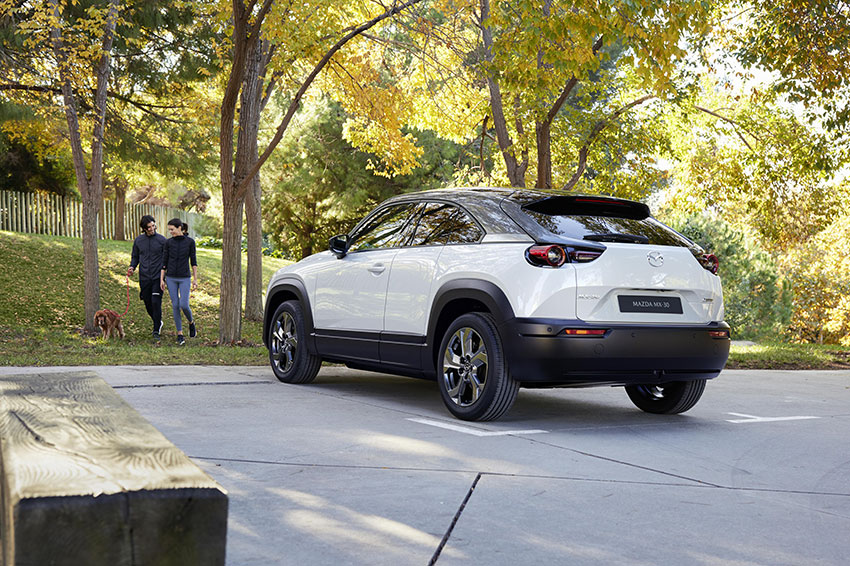