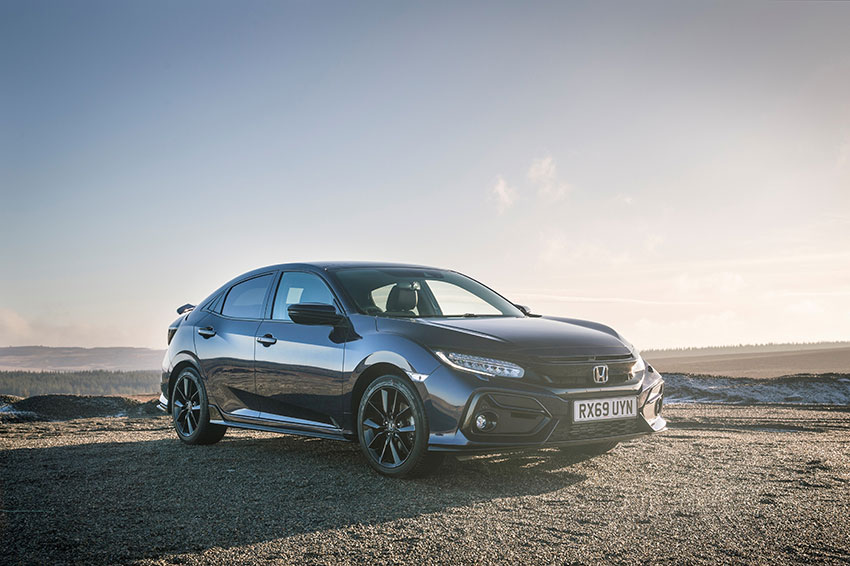 What was happening in 1972? I’ll tell you. Rod Stewart was in the charts with ‘You Wear it Well’, as was Elton John with ‘Rocket Man’. It wasn’t only a significant year for music, though - it was a golden year for automotive, too, because that’s when the Honda Civic was introduced.

It’s gone on to become a legend, with millions of Civics sold around the world. The model can even take a bow for helping Honda to stay in car manufacturing. Before the Civic came along, the Japanese firm was thinking about kicking cars to the kerb and focusing on motorcycle production.

The first Civic had just two doors, but three-door and five-door hatchbacks soon followed. The car came with front-wheel drive and was fitted with a 1169cc engine, making it a competitor for the popular MINI. It also offered a relatively spacious cabin and was very frugal when it came to fuel.

It was the economical aspects of the Honda that really chimed with the era – and it undoubtedly boosted the car’s popularity. This is because the 1973 oil crisis meant demand for fuel-efficient vehicles was at an all-time high.

The popularity of the Civic has ceased to abate – and the model is now in its tenth incarnation. Yet, ironically, even though Honda still makes increasingly efficient cars, the Civic has become better known for its sportiness – particularly when you consider the Civic Type R. This has become a hot hatch legend over the years.

But not everyone wants a true Type R. Let’s face it, despite its sporty good looks, the performance might be perceived as overwhelming for some. So, what happens if you want the hot looks but not all the action? Well, there are lots of other Civic grades to choose from that look the business – but none look as good as the Civic EX Sport Line. This new grade has been ushered in to join Honda’s revised 2020 Civic range and features exterior design cues that have been inspired by the admired Type R. 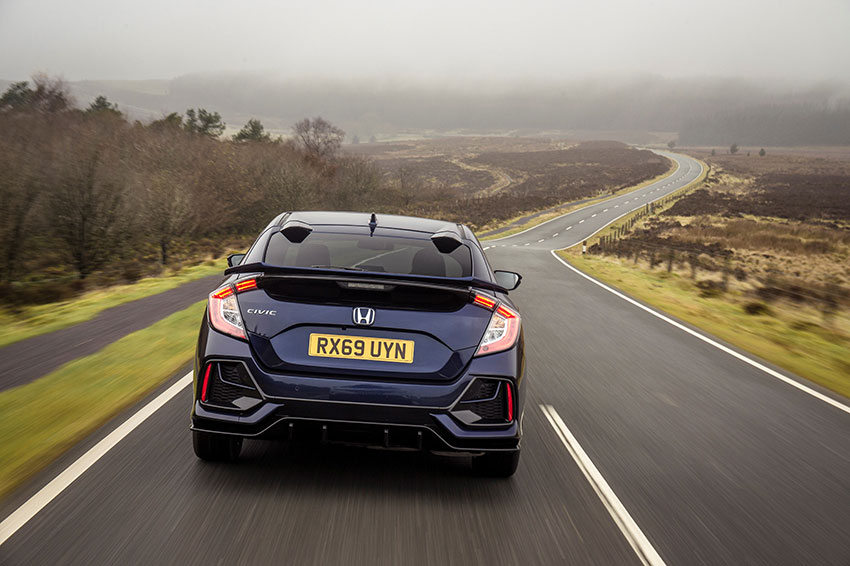 The box-fresh Sport Line is based on the top-of-the-tree EX model and adds aggressive styling to the practicality and exceptional driving dynamics of the bog-standard Civic. The Civic’s distinct design is heightened on the Sport Line with the addition of a rear diffuser, front and side skirts, and a rear spoiler. 17-inch high-gloss, piano black alloy wheels further distinguish the Sport Line. What's more, LED headlights and daytime running lights build upon the purer styling direction that features throughout the updated Civic line-up. Adding to the palette of existing tones for all Honda Civics, the Sport Line can also be finished in a fetching new shade, Obsidian Blue. Indeed, this was the colour of the test car I was handed the keys to.

Behind the wheel, the Civic EX Sport Line is instantly impressive – and that’s before you even get rolling. A bunch of styling upgrades within the interior catch the eye. Features such as the red stitching detail on the Sport Line’s steering wheel, seats, gear shift, door panels and boot are hard to miss. Then there’s the Honda CONNECT infotainment system that’s fitted as standard. It includes DAB radio, as well as Android Auto and Apple CarPlay connectivity. Better still, the system integrates with a reverse parking camera. But all the goodies aren’t just in front of you ¬– look down, and drilled aluminium pedals are under your feet, reflecting Honda’s sporting heritage. 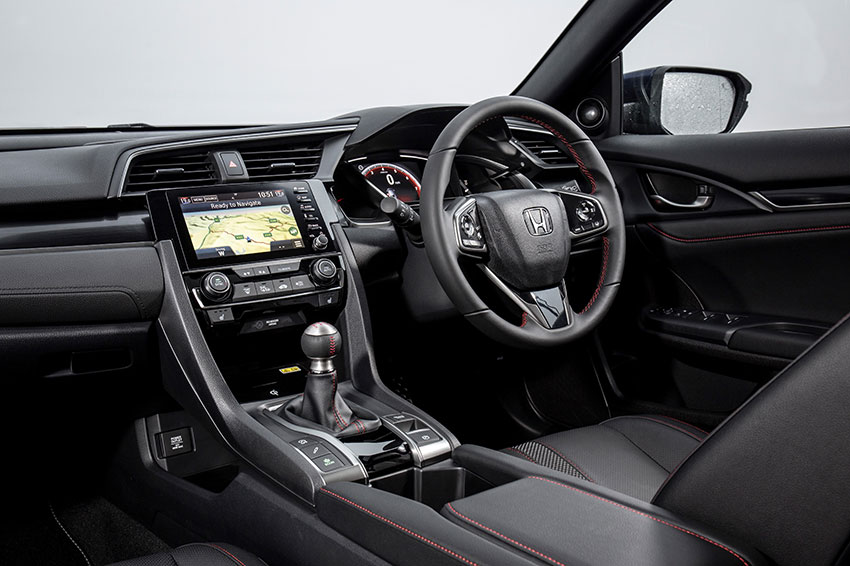 Gun the 1.0-litre three-cylinder turbocharged engine and a captivating combination of sporty appeal and efficiency becomes evident. Yes, I know, a 1.0-litre unit doesn’t sound like much, but it feels genuinely eager and propels the car effortlessly. The VTEC Turbo powerplant produces a stirring 126 PS and 200 Nm of torque with fuel economy of 42.2mpg to 47.1mpg and low CO2 emissions.

The EX Sport Line comes with the choice of either the latest-generation CVT with paddle shifts, or a six-speed manual gearbox. Both operate slickly – it’s just a question of whether you can be bothered with any left foot action. I know I can’t most of the time because a clutch can be a pain in the foot – literally. Plus, technology has made auto transmissions so competent, that it almost seems pointless changing gear yourself. I mean, why add to the stress, especially if you regularly commute in miserable stop-start traffic? Still, as I say, the Civic’s manual gearbox moves through the cogs sweetly, and the Honda’s light clutch isn’t something that’ll wear your shoe leather out in a hurry.

Who’d have thought from those humble beginnings 48 years ago that the little Honda would become this sophisticated? The Japanese motor has certainly come a long way. And now, priced from just £25,510 for the manual, and £26,910 for the CVT, you can test-drive the new Civic EX Sport Line model at your local Arnold Clark branch. First deliveries started in January, so you’ll be able to get behind the wheel of the EX Sport Line quickly if you feel it’s the car for you. 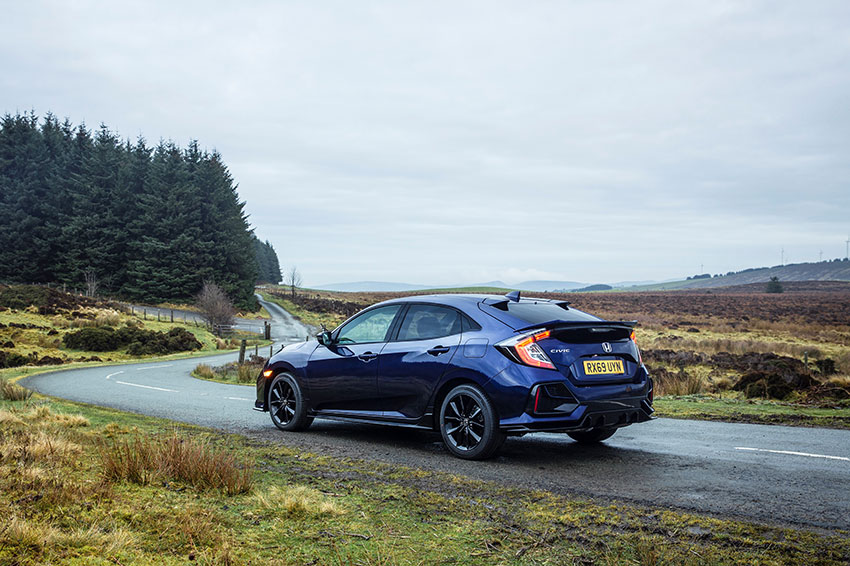