Mercedes-Benz enters the electric car market with this luxury SUV. 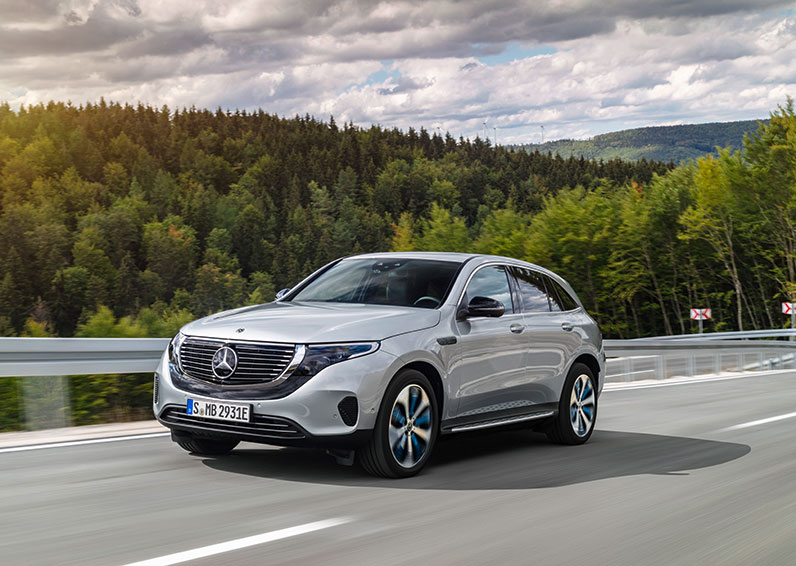 There’s no denying the fact that there is a growing — albeit still slow — graduation towards electric cars. The government’s policy to ban the sales of petrol and diesel cars in the future is clearly impacting on buyers’ decisions, but so too is the growing number of excellent electric cars.

Of course, the tipping point of EV purchases won’t come until manufacturers are able to offer a comprehensive, affordable choice of cars under £30,000 and with a range in excess of 300-350 miles. It also depends on the creation of a nationwide infrastructure of recharging stations and points to make sure that the country can keep moving.

This year will see the introduction of the long-awaited Golf-sized all-electric ID.3 from Volkswagen, followed soon after by the ID.4 SUV. If there’s likely to be a game changer in terms of EV sales, the ID.3 could well be the one. Or another strong contender is the Mazda MX-30, available to pre-order from Arnold Clark now, priced from £26,995 (including government grant).

And while other mainstream carmakers continue to launch electric-only models which combine lower costs and longer ranges, including the Vauxhall e-Corsa, Peugeot e-208, Renault ZOE, Hyundai’s trio of the e-Niro, Kona Electric and Soul EV, plus the good old Nissan Leaf, much of the attention is still focused on top-end EVs.

What are Mercedes-Benz’s EV plans? 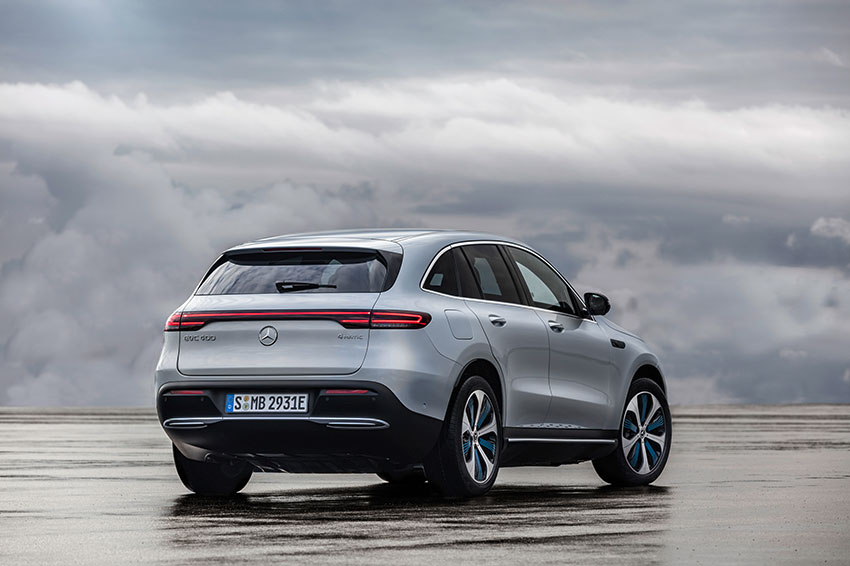 With its EQ range, Mercedes-Benz is planning to roll out a whole range of new electric cars between now and 2022, with one pure electric car under the aforementioned EQ banner joining the range each year.

First up is the EQC, whose silhouette mimics the current GLC family crossover (no surprise, as that was the car which spawned the EQ concept unveiled at the Paris Motor Show in 2016). But it won’t be all SUVs from Mercedes. The German car giant has also confirmed a pair of electric saloons, likely to be called EQ E and EQ S. Mercedes predicts that between 15-25% of its car sales will be electrified by 2025.

Back to the EQC. It’s not small. But it is, after all, a mid-sized, five-seater SUV with four-wheel drive and more than 400 horsepower. It’s also incredibly smooth to drive – more of that later. And it’s quick; it’ll easily see off most ‘traditional’ hot hatchbacks.

It’s not cheap. In this EQC 400 4Matic AMG Line Premium Plus trim, it’ll set you back £71,100 (actually £73,490 with a couple of options thrown in). For a car of its size, and with the latest tech, £70,000 is the ballpark figure to be paying, and it sits comfortably alongside the Audi e-Tron and Jaguar i-Pace in terms of price.

Fair enough, but what about power?

Under the EQC’s cabin floor (just where it would be in a Tesla) there’s an 85kWh lithium ion battery pack; 80kWh of that total capacity is made ‘usable’ by the car’s control electronics.

Ok, brace yourself; here’s the techie bit. Driven by a separate electric motor and planetary gearbox per axle combined, the EQC produces up to 402bhp and 561lb/ft of torque. The latter easily sees off its rivals from Audi and Jaguar. It also helps it crack the 0-62mph sprint in 5.1 seconds. All the more impressive when you realise it weighs 2495kg; that’s more than two tons.

When it comes to range, it’s appealing for early EV adopters. Depending on optional specification, you should get 259 miles on a single charge. And having driven it — and not necessarily with a featherweight right foot — it’s fair to say that Mercedes’ official WLTP range claim for the car should also be easy to reproduce in the real world.

Anyone whose main journeys include a typical 50-70mph motorway cruising speed will find the magic ‘3.0 mpkWh’ efficiency target required to put 240 miles between charges will come up quite readily. So far, so good then.

And what about charging times?

There’s no denying that the EQC slips quite easily into the luxury end of the market. Externally it resembles, but is different enough from, the GLC-badged relation on which it’s based. Inside though, things have been raised to another level.

Without question there’s more room in both rows of seats and that space means accommodating two adults and three children across the back is easy-peasy. The dashboard is, in typical recent Mercedes style, impressive and lavish, topped out with plenty of innovative tactile finishes and design motifs. 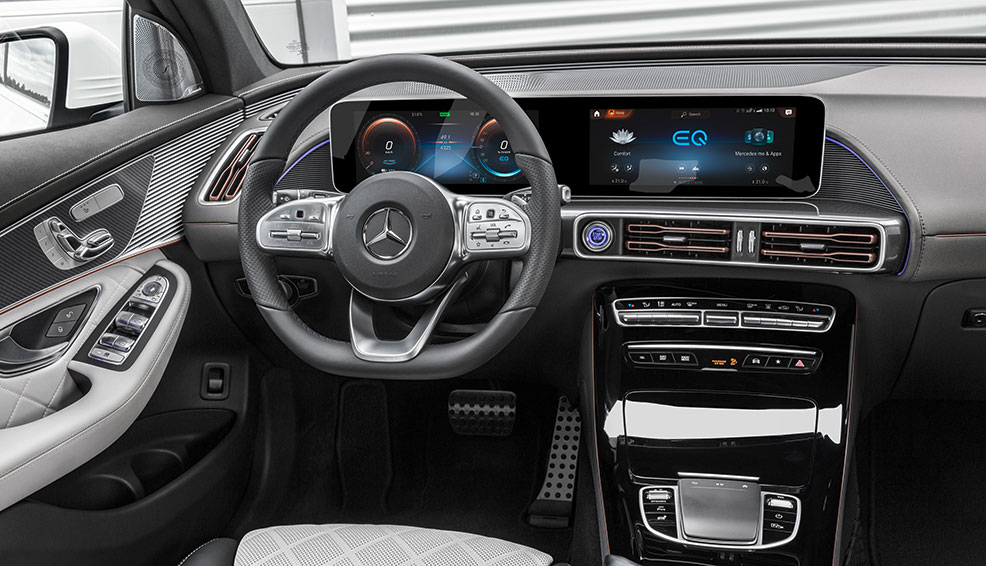 Does it have a sporty feel?

Interestingly, and especially compared to some other SUVs, the driving position in the EQC sits slightly lower. Sure, you still have a rather imperious view above other cars and hedgerows, but it gives the driver a slightly more sporty vibe.

In front of the driver sits the car’s instrumentation and infotainment consoles which — as in keeping with other current Mercedes models — are presented in one near-seamless sweep of digital display real estate. It’s mightily impressive. Accessing them is easy: either by touchscreen input, a fingertip input console on the transmission tunnel, control consoles on the steering wheel or voice control. 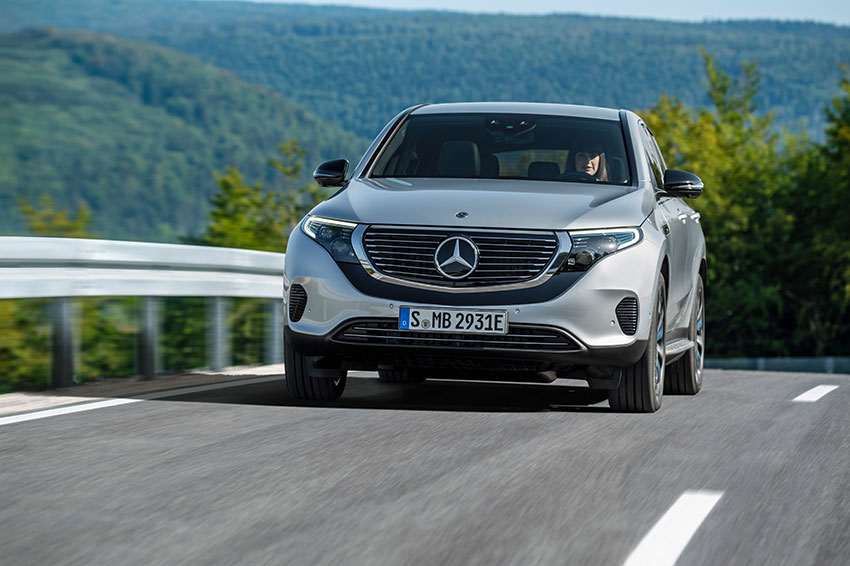 When it comes to actually driving, the EQC has Mercedes’ usual drive mode selector that allows you a choice of five programs (from ‘Sport’ to ‘Maximum Range.’) Just for good measure, there’s also a pair of paddles on the back of the steering wheel. You can use these to adapt how strongly the car ‘regenerates’ battery charge on a lifted throttle through a further five settings.

It will take you a wee while to customise the various drive modes and regen settings to suit your needs. But after you’ve spent time with the car on your daily driving routes, and you find the right balance, the EQC will deliver – and deliver quietly.

And it’s the same with the car’s range of sophisticated, semi-autonomous driving modes. My advice – stick to a cautious approach, and simply use autonomous technology just for what it’s good at (essentially busy motorways) – and you’ll get on with it just fine.

So, it’s fast, refined… and worth testing?

Flick the EQC into Sport mode and, even for an electric car, it feels quick and responsive. And by that, I mean it’s fast in the way it gets up to everyday town speeds. There’s certainly nothing lumbering about this SUV.

If you’re in the market for a luxury EV, there’s no question that the EQC should be on your ‘test’ list. It’s refined, boasts cutting-edge technology, is relaxed and rewarding to drive, will swallow your family and all the associated gubbins, and — when the need arises — can be exciting. It’ll also fit seamlessly into your everyday driving needs. What more do you need? 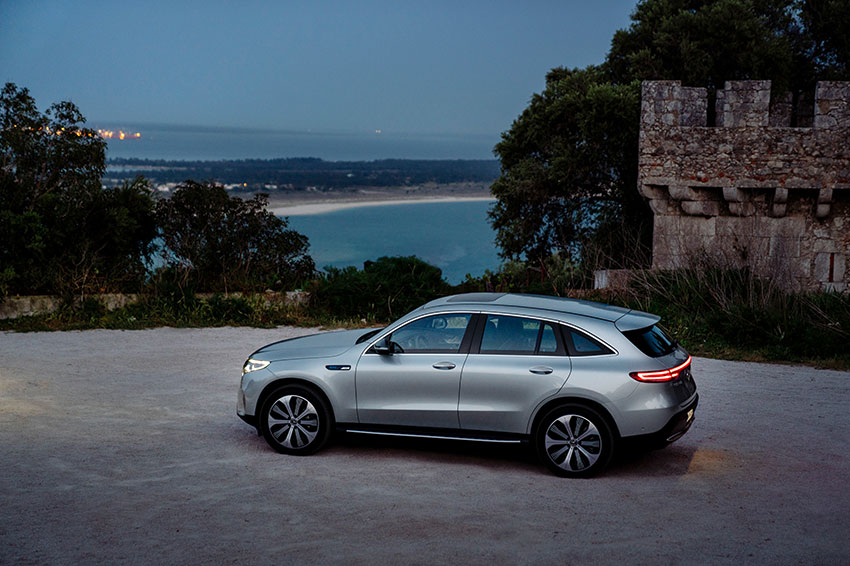