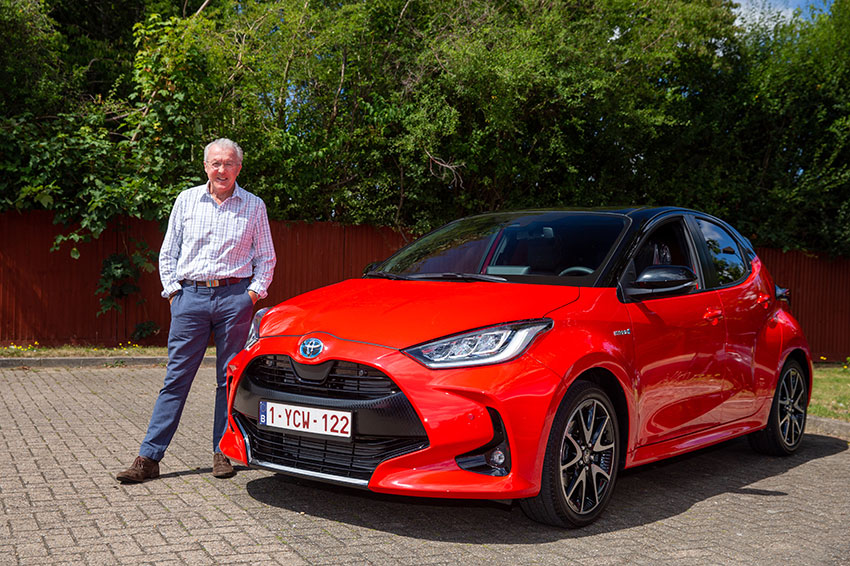 It seems that everywhere you turn now, it’s ‘hybrid, hybrid, hybrid’ when car manufacturers launch a new model. For Toyota though, hybrid technology is what runs through its engineers’ veins, so the fact the latest Yaris debuts the Japanese brand’s fourth generation of petrol-electric drive system is certainly worth checking out.

Two things. First; the Yaris is the bestselling Toyota in the UK, thanks primarily to its rock-solid reliability, and hybrid powertrain. Second; hybrid technology is so important to the Yaris that it will be the only powerplant available.

Ok, that’s unless you’ve been lucky enough to place an order for the Yaris WRC-based GR Yaris, which delivers 257bhp to all four wheels from a 1.6-litre turbo engine. Fingers crossed that will be a review to be savoured later. 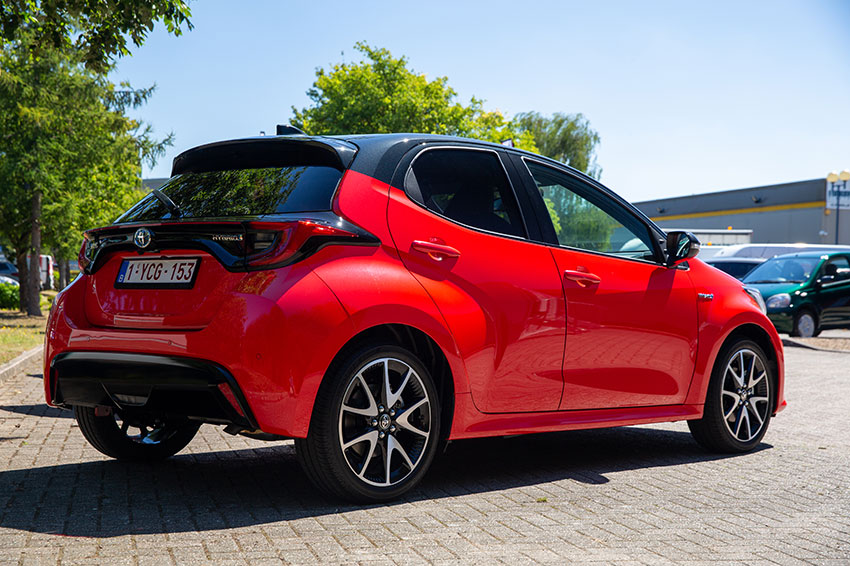 Yes, let’s concentrate on the bread and butter versions of the Yaris. While there’s an all-singing, all-dancing Launch Edition model costing £24,005, the range starts at £19,910 for the entry-level Icon spec. This includes 16-inch alloys, a seven-inch infotainment system with Apple CarPlay and Android Auto, electrically adjustable side mirrors, electric front windows, aircon, a reversing camera, plus auto headlights and wipers.

Next up is the Design spec (£20,970) which adds different alloys, a bigger infotainment screen, and electric rear windows. Dynamic models (£21,920) get 17-inch alloys, a JBL infotainment system, and a push button start. Finally the Excel, which starts at £22,220, adds blind spot monitoring, auto braking, and a panoramic roof.

Worth highlighting here that Toyota is making significant efforts to deliver attractive finance packages. Put down a deposit of around £4,300 on a Design-edition model and you’ll pay £189 a month over four years.

How good is the new hybrid system?

Right, back to that self-charging hybrid system unit. Bear with me: it’s worth it. The 1.5-litre engine used here is a three-cylinder version of the 2.0-litre, four-cylinder found in the Corolla. It’s linked to a new electrical motor producing 80bhp and 104lb/ft of torque, along with a lighter lithium-ion battery pack and drives the front wheels via a CVT automatic gearbox. Combined power is 114bhp, with a 0-62mph time of 9.7seconds.

But this is what will make you sit up: the new Yaris will officially do up to 68.9mpg, based on the more demanding and realistic WLTP test. The outgoing Yaris Hybrid's WLTP figure is 48.7mpg. And without trying, on my two-hour drive in the car in deepest sunny Sussex, I achieved around 63mpg. 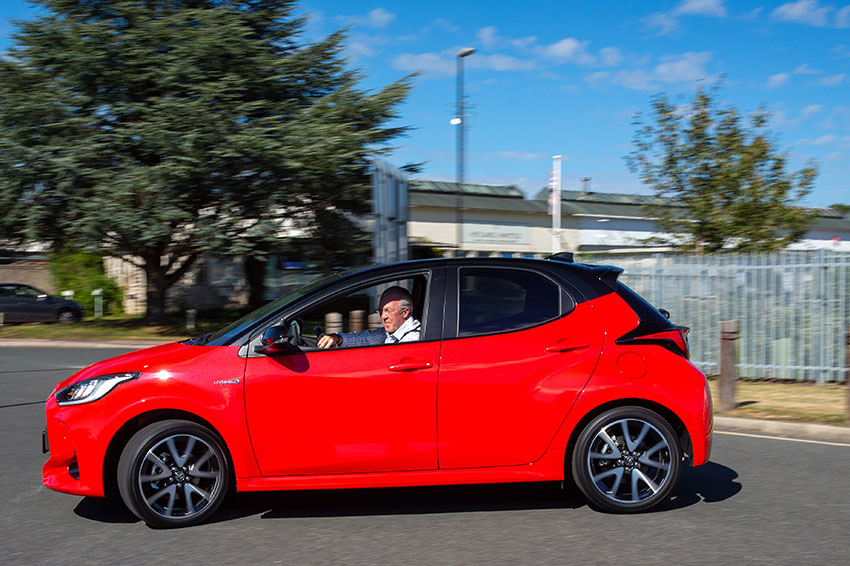 Covid has impacted on ‘first drives’. Instead of me going to Belgium to drive the car, Toyota brought five Belgian-registered left-hand drive cars across to its GB headquarters for a small group of journos to drive.

First-up. The Belgian-specced cars don’t replicate the spec of any car to be sold in the UK. The cars were also on the larger 17-inch alloys, which also utilise the firmest springs and dampers, and the lowest profile tyres. Each wheel size has bespoke suspension settings attached to them.

Personally, I found the ride more than acceptable; but I prefer firm suspension settings. A few others found the ride too firm. Given the spec of the car I drove is more akin to the Dynamic and Excel specs in the UK, I’d suggest the mid-range Design spec will be the pick of the bunch. Fitted with 16-inch wheels and tyres with deeper side walls, allied to softer suspension, it’ll be more accommodating of the bumps and potholes on UK city centre roads. It’s a view Toyota agrees with: it forecasts Design will account for 48% of UK sales.

Ok, how does the new car drive? 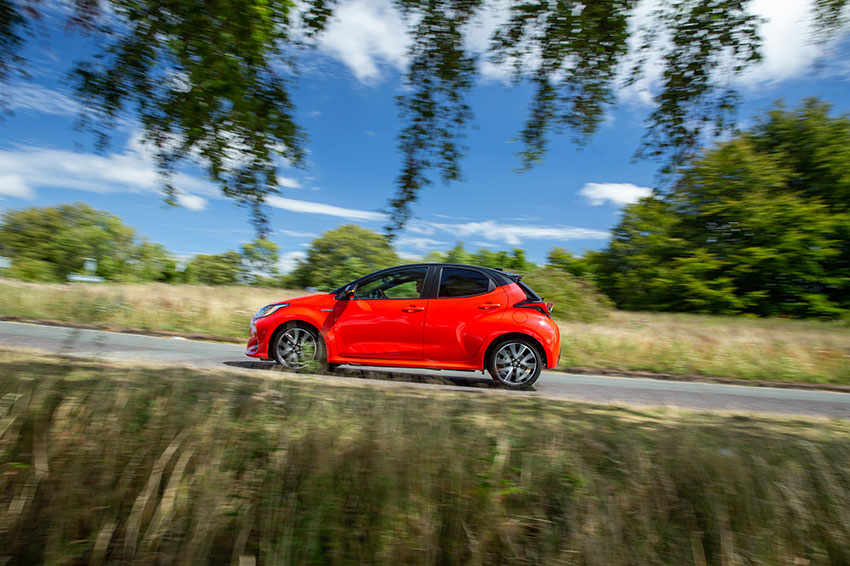 There’s no question this is the best-handling, most fun-to-drive ‘mainstream’ Yaris that Toyota has built. In town — where most owners will spend the majority of their time driving — it’s a hoot. The beefier battery helps the Yaris operate in pure EV mode for around 80% of the time in typical urban journeys. It can also be driven up to 80mph before the petrol engine kicks into life; that’s 55mph higher than the previous version.

But back in town, the direct steering and taut chassis make it easy to manoeuvre. The Yaris pulls away under quick and quiet electric power alone, and drivers will feel well satisfied that the stab of torque you get is useful when pulling on to roundabouts and exiting junctions.

When you require more from the electric motor, the petrol engine fires up and the two power sources combine to provide reasonable mid-range acceleration. Toyota highlights the new Yaris is two-seconds faster during overtaking speeds of 49-74mph; down to 8.1s.

Doesn’t it have a CVT gearbox?

It does, indeed, have a CVT automatic gearbox: and it’s now one of the best in the market. Gone are any thoughts of elastic bands and elasticity; this version is a huge step up. Combined with the impressive torque levels and stiffer chassis, suddenly the Yaris is an agile little beast you can dart around with and have some fun.

There are three driving modes: EV only, Power and Eco. EV, not surprisingly, attempts to keep things using just electricity for as long as possible. Power makes the steering feel a little heavier, and not really much else; well, certainly to this driver. And Eco simply ‘relaxes’ everything and ensures the Yaris coasts at every opportunity. Regenerative braking is maximised by shifting the gear lever down to B mode. 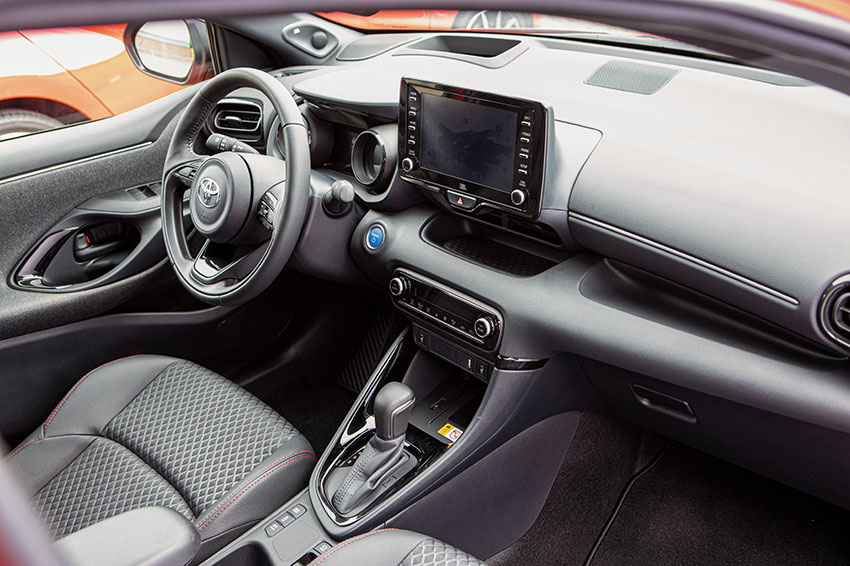 It’s all beautifully simple and functional, but with a quality twist. Textures and surfaces are pleasant to touch, and I loved the diamond-patterned seats.

If you’re in the market for a supermini, the Yaris may well have been a car you ignored. Now, it should be on your list. In the right conditions, essentially spending life in town, its hybrid powertrain is mightily efficient. Just make sure you test 16-inch and 17-inch alloys before making your decision.