Looking for something cleaner, greener and cheaper? We take a look at a smart new way to drive. 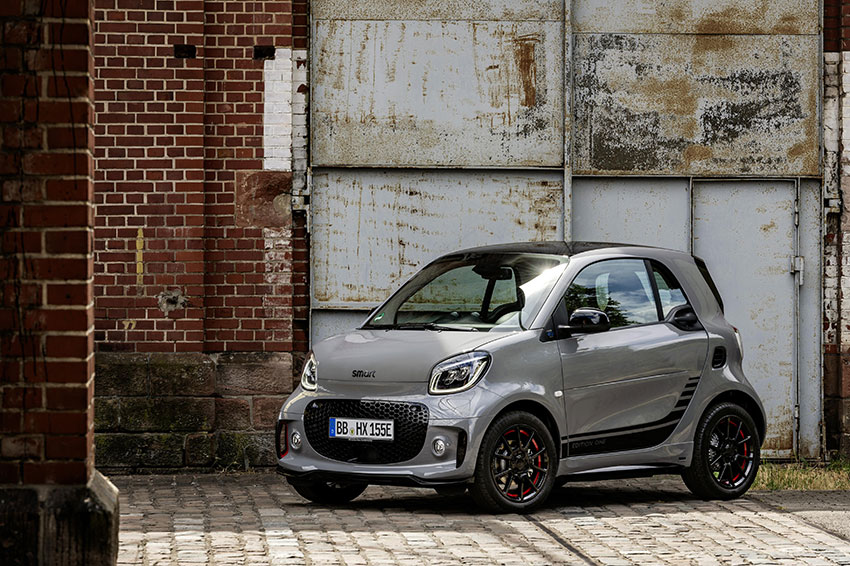 We’re all conscious of the effect that traditionally fuelled cars have on the planet, and although the developing EV market is exciting, electric cars can be out of many people’s price range. However, that looks set to change.

smart has always been at the forefront of urban mobility, offering electric variants since 2007, but now they’re going fully electric with a new suite of EQ models. And the super compact electric two-seater smart EQ fortwo coupé takes it a step further.

What’s so great about it?

Well, the smart EQ fortwo coupé is not only a stylish little urban whizzkid in a similar vein to the rest of the smart line-up, but it’s also the cheapest electric car in the UK by a mile. Retailing at £17,550 (with a £3000 government plug-in grant available), its closest rival is the Renault Twizy, which, despite being conceptually similar, is technically a quadricycle. The EQ coupé however, is a true electric car with a 17.6kWh lithium-ion battery that’s capable of 82bhp. So no more getting beeped at for driving a glorified moped.

Does it look the same as the previous EQ smart cars, then?

Okay, so the new electric EQ line-up, which also includes forfour models, is instantly recognisable. However, there are some notable differences inside and out. First, the front end of the fortwo coupé has been redesigned with a cool cheese-grater style grille, LED headlights and a curved, uncluttered exterior that makes it look like a friendly bug. smart calls this design ‘radically simple’.

And of course, it wouldn’t be a proper two-seater coupé if it didn’t have a soft top option – the range-topping fortwo Cabrio, which comes in at around £20,000. There’s a good selection of personalisation options, too. Optional Passion Advanced, Pulse Premium and Prime Exclusive trim packages are available, so you can play about with wheel designs, splashes of colour in the interior, stripes and coloured bumpers. The emphasis is definitely on fun, which, let’s face it, is exactly what the world needs right now.

What about the interior?

As this is an electric smart car with no gear stick or transmission in the way, inside that radical simplicity is taken further with plenty of touches designed for modern urban driving, with a new stylish leather multifunction steering wheel, cupholders and a smartphone compartment – which you’ll definitely need because you can control your battery charging and climate remotely via smart’s EQ Control app.

There’s also a streamlined infotainment system with MirrorLink, which is essentially a blank canvas for your device, plus sat nav and a 22kW onboard charger. Comfort is taken care of with two generously proportioned seats with honeycomb upholstery, which you can upgrade to heated seats with the Prime Exclusive trim.

What’s the range and charging time?

The beauty of the smart EQ fortwo coupé is that the battery is so compact it’ll charge to 80% in no time – 40 minutes on a public fast charger to be precise. At home, it takes just over three and a half hours on a domestic socket, but a wallbox charger is included when you buy. For that, you get a range of 70 miles, which is more than enough for everyday city driving and commuting – and just think of the extra thrill of having free rein in those coveted ULEZ zones.

Although we haven’t tested it ourselves, like many compact EVs the EQ coupé electric smart car promises to be no slouch from a standing start, managing a zippy 0-37mph in 4.8 seconds. With Active Brake Assist to stop you getting too close to other vehicles, Crosswind Assist to prevent body roll in bad weather and smart’s famous tiny turning circle which makes it a breeze to park, it’s perfectly designed for city driving.

Should I buy one?

Electric cars are cheaper to care for and charge than traditionally fuelled cars, making the smart EQ fortwo coupé a low maintenance choice for those who want to get across town in a hurry. While it might not suit the school run, it’s perfect for young people and commuters who want to minimise their carbon footprint, offering a stylish and individual alternative to public transport. And at that price – what have you got to lose?