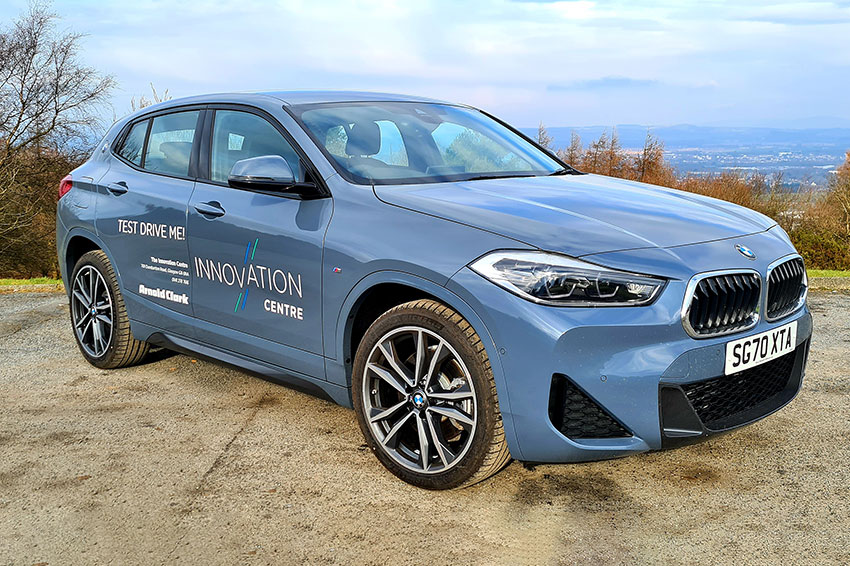 Since its launch in 2018, the X2 has proved to be a successful addition to the BMW line-up. Competing in a crowded segment, BMW gave the X2 a moderate facelift, and in doing so, decided to make it more efficient and environmentally friendly – by joining the plug-in hybrid race.

As the PHEV (plug-in hybrid electric vehicle) sector hots up with a growing number of people looking to reduce their carbon emissions, BMW have had to adapt amid strong competition and ever-changing regulations. And so, the X2 xDrive25e was born.

So, will the new hybrid model help enhance the X2 in the PHEV era?

Classed as a Sports Activity Coupe, the xDrive25e joins the ranks of the newly facelifted X2 range. There's nothing to immediately identify the car as a PHEV when compared to its siblings, other than some bespoke badging and a front-end charging flap.

Despite ascending incrementally in the 'X' range, the X2 is actually slightly smaller in stature than its stablemate the X1, yet has the same wheelbase.

The famous kidney grille has always been an identifiable signature of Bayerische Motoren Werke AG, and, in this case, it's a fraction wider at the front, giving the X2 a slightly more distinctive sportier look. As with all new X2 models, aesthetically, the PHEV has a tweaked front end, with new LED headlights, which now incorporate the fog lights, giving the bumper a cleaner appearance. The rear has a tweaked horizontal design, with accents and creases continuing to the LED lights. It's complimented by a neat spoiler enhancing the 'sportier' look of the roofline while also improving drag efficiency.

Inside, the X2 doesn't disappoint. The driver-focused cabin is well laid out and well finished. Front seats are comfortable and practical, though rear space is a little tight for taller adults. Boot space has been compromised slightly to make way for the battery which sits under the rear seats, and now offers 410 litres as opposed to 470 litres in the conventional models. Fold the rear seats down, however, and you'll have 1,290 litres available. 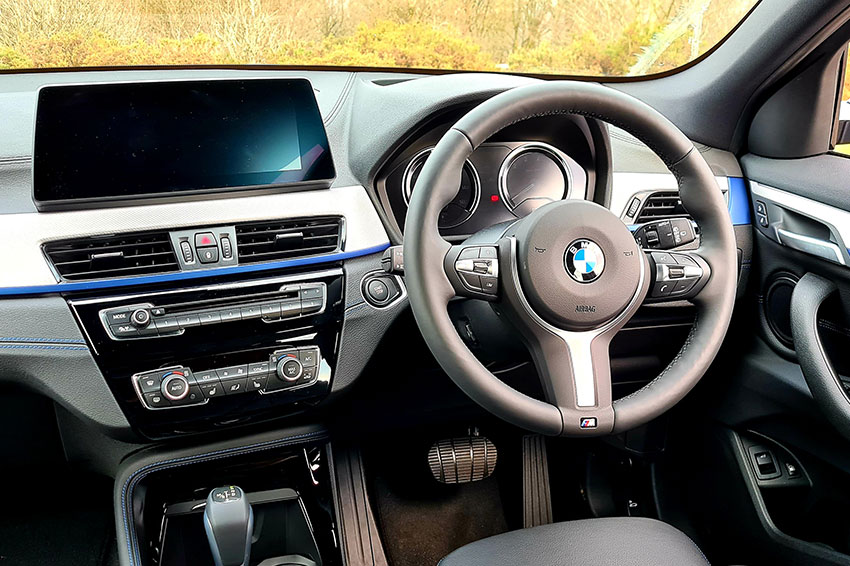 An ‘eDrive’ button on the lower console activates three eDrive modes – Auto, Max and Save battery. 'Auto' switches between power sources when required, 'Max' keeps driving all-electric and 'Save' reserves the battery range until you need it. Even with the extra eDrive instrumentation, the digital displays are easy to navigate as is the sat nav. Hybrid-related readouts on the displays provide information, such as; energy flow, current and previous consumption levels and miles covered in electric motor and combustion engine respectively.

Using a 1.5-litre three-cylinder petrol powertrain, coupled with an electric motor and a 10kWh rechargeable lithium-ion battery, the xDrive25e produces a combined 217bhp. 0-62mph in 6.8 seconds with a top speed of 121mph. The ‘xDrive’ in the PHEV derives from BMW's four-wheel drive system, and comes from a combination of the petrol engine powering the front wheels and the electric motor drawing energy from the battery to power the rear wheels.

It's quite an intricate and clever system which works via a 6-speed Steptronic automatic gearbox, which in turn makes it possible to have front, rear or four-wheel drive capability. The hybrid-specific four-wheel drive system resulting from this, helps achieve a degree of agility that is unmatched in the competitive environment.

The xDrive25e offers a smooth drive, very responsive acceleration (in electric or petrol mode) with excellent steering and brakes. The body structure and suspension set up help weight distribution and ride quality. To optimise aerodynamics, the vehicle has been lowered slightly compared to the conventional model variants.

The main selling point of the xdrive25e is obviously the hybrid aspect. As with most efficiency figures with regards to any plug-in hybrid, the quoted figures are always top end and might not reflect your driving habit or style. BMW claim the xDrive25e is capable of doing a combined 148.7mpg and up to 43g/km CO2, but figures will fluctuate, depending on how you drive the car, weather conditions and several other variables. Getting anywhere near that figure will mostly rely on battery power, and even then, the electric range of 35 miles on a full charge is open to debate, especially if you push the limits of the 84mph on all-electric top speed.

Should you run out of electric power, however, the engine will cut in, meaning most short town trips can be completed with zero emissions. Business users will see a much lower benefit-in-kind tax cost compared to the standard X2.

The battery can be fully charged with a domestic plug in approximately five hours. Ideally for fast and efficient charging, a 100% charge from a BMW i Wallbox takes just over three hours. BMW will also provide a charging card, which can be used with most public charging networks.

Providing you use plug-in technology the right way, for many drivers, a hybrid makes more sense than going full electric. And while the BMW X2 xDrive25e might lack some of the panache of its competitors, it makes up for it on the road, offering an engaging drive.

Times are a changing, and hybrids will evolve. Until then, the xDrive25e will continue to be a worthy inclusion to the X2 range.