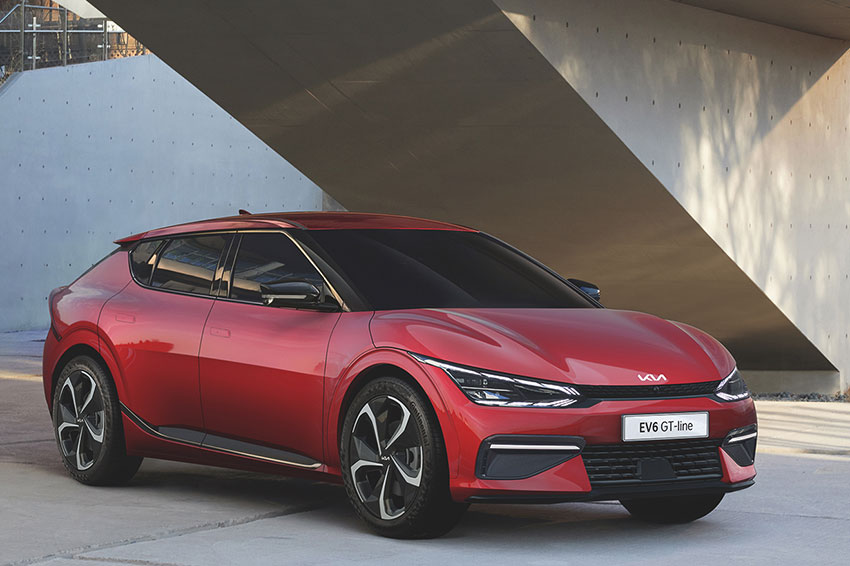 Cast your mind back a good few years. Did you ever, realistically, think you’d be comparing – positively – a Kia with a Porsche? Well, you can now – and it’s all thanks to the wonders of electricity. So, say hello to the new, all-electric Kia EV6, which promises a range of up to 316 miles.

First things first: I think it looks ace. Sure, there’s a resemblance to the Jaguar i-Pace, but that’s no bad thing. It’s sleek, sporty and marks a dramatic change in styling by the Korean carmaker. It also promises to turn heads when it arrives in the UK in October. Prices start at £40,895, but that will fall when the entry-level models come on stream later.

But if you’re interested in an EV6, you can reserve one now by placing a refundable £100 deposit. And that’s ahead of order books opening fully in May.

Ok, but what about performance, range… and the Porsche thing? 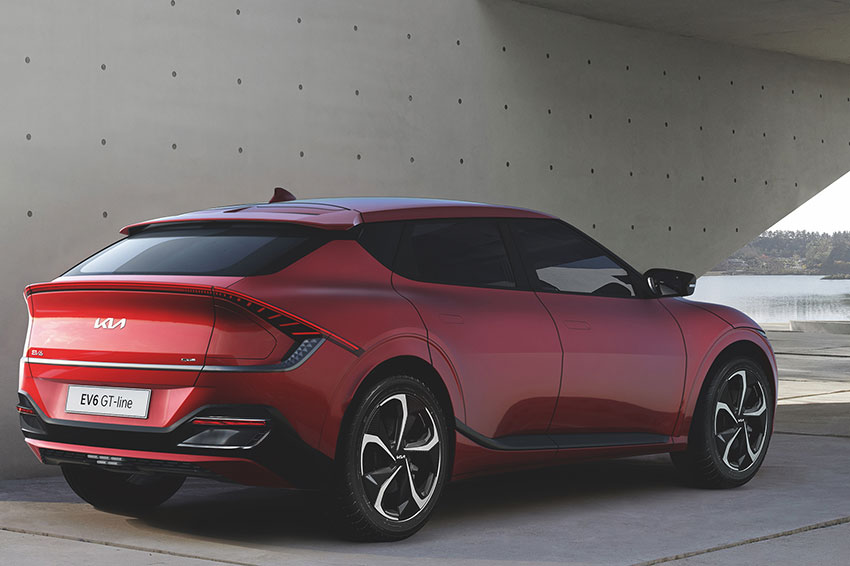 Let’s deal with the EV6 pricing and model range first. At launch the car will be available with the choice of two batteries; buyers can also choose between two- and four-wheel drive models. The entry model is a two-wheel drive 58kWh which uses a 168bhp rear-mounted electric motor.

Frustratingly, neither of the two 58kWh cars will be available from launch, but will follow later in the year.

Kia has also yet to confirm what range the 58kWh models will have, but we do know the larger 77.4kWh rear-wheel drive model will be capable of 316-miles on a single charge. This will also be the starting point for the EV6 when order books open in May.

And while the rear-wheel drive model is powered by its 225bhp motor, the four-wheel drive car extracts more power for the same 77.4kWh pack, upping the stakes to 321bhp. The latter will scamper from standstill to 62mph in 5.2 seconds.

Isn’t there a GT version too? 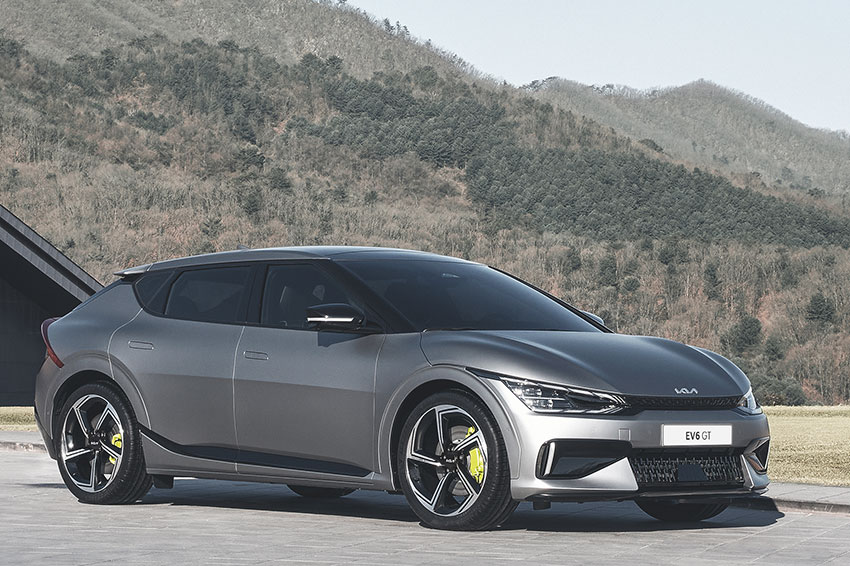 There certainly is. And this is where Porsche Taycan owners may well start getting a little bit twitchy. Kia’s range-topping version of its electric crossover, the EV6 GT, gets a whopping 577bhp from a dual-motor set-up, and is fitted with four-wheel drive as standard.

It also delivers superior performance: 0-62mph comes up in an eye-watering 3.5-seconds. The £83,500 Taycan 4S takes 4 seconds. It’s even faster than a 992-generation 911 Carrera S. Kia is also aiming for a top speed of 162mph. And while it’s hoped the GT version will be available to order from launch, we definitely know range drops to 251 miles for the sportier variant, which is a small price to pay for such performance.

At launch, prices will start at £40,895 for the 77.4kWh rear-wheel-drive 225bhp model; this obviously fails to qualify for the government’s restructured plug-in car grant which now applies to cars with a maximum price of £35,000 (expect the later 58kWh to duck below £35,000 and qualify). The EV6 though does include plenty of advanced safety tech, sat nav with Kia Connect, full LED headlights and dual 12.3-inch curved screens.

Next-up is the GT-Line version, which starts at £43,895. Using the same powerplant, it benefits from a more aggressive body kit; there’s also likely to be additional tech. Standard on the GT-Line is a power-operated driver’s seat, plus suede upholstery and LED ambient lighting.

The range-topping, high-performance 577bhp EV6 GT will start at £58,295 and, as mentioned above, is only available with the high-power, all-wheel-drive powertrain. It is though well-specced, including larger brakes with neon green brake callipers, intelligent LED headlights, and 21-inch alloys. Inside the cabin, the range-topper also gets a unique sports steering wheel and a premium stereo system, plus fresh trim panels to the car’s dashboard.

Another reason to be impressed. The EV6 uses an 800-volt electronic architecture. What does that mean? In simple terms it can be charged effectively twice as fast as a lot of other EVs. Find the correct, potent charger and Kia says you can have an additional 62-miles of charge in just four-and-half minutes. It’ll also deliver 10%-80% in 18 minutes, which is hardly time enough for a coffee!

Cleverly — as with the forthcoming Hyundai Ioniq 5 from the sister Korean carmaker — the EV6 has a function to allow the battery pack to power external items, such as power tools, and even e-powered bikes and scooters.

Anything we should know about the tech and safety? 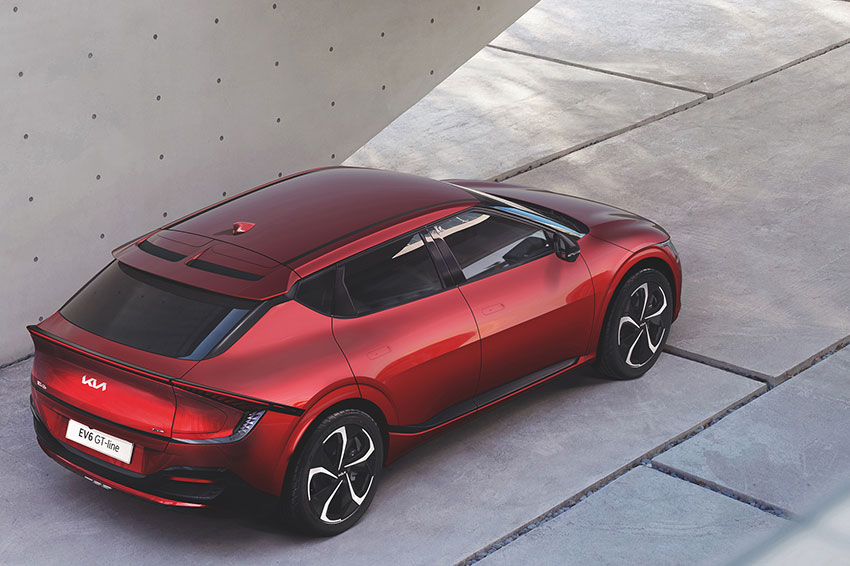 Without going into ‘boffin’ mode, the EV6 does offer drivers six different regenerative braking settings. I know, that sounds a lot, and potentially confusing, but Kia has done its best to make it all pretty straightforward.

The six modes include completely off; modes 1 to 3; an ‘i-Pedal’ mode — which allows maximum energy harvesting and brings the car to a stop without touching the brakes, allowing one-pedal driving (I love this mode because it brings out the competitive nature to see just how many regenerated miles you can add to your range) — plus an auto setting.

As for safety, there’s loads. Included are remote smart parking assist and safe exit assist — which warns passengers of approaching vehicles when getting out of the car — plus highway driving assist 2 (semi-autonomous adaptive cruise control) with auto lane changing function, lane follow assist, and collision avoidance with AEB. 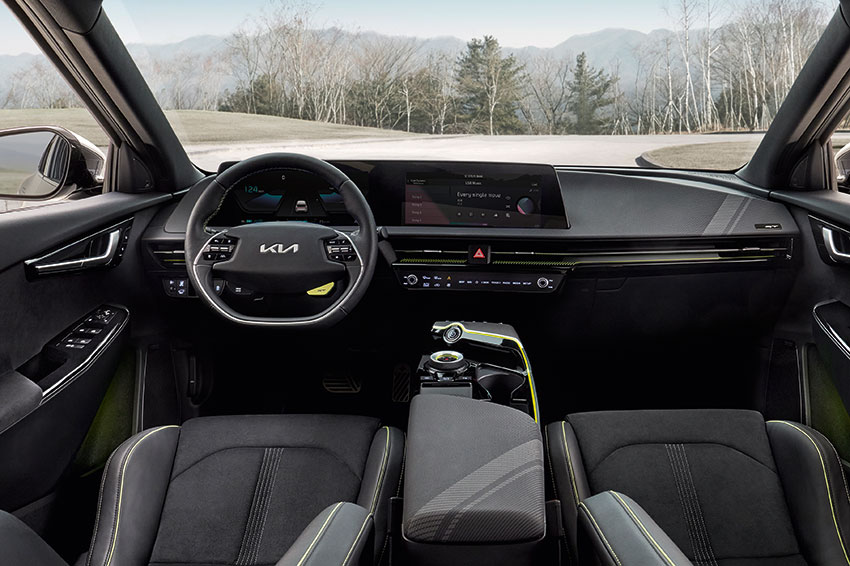 As you would probably expect, pretty modern. There’s a long, single curved screen panel, positioned on top of the dashboard, which essentially houses a pair of 12-inch screens, including the driving display and the infotainment.

Below the dash is a panel of real, physical buttons. These can be used to change the functionality on the screen, such as swapping between air-con controls and navigation; clever and safe, in so much as it reduces the time the driver’s eyes are off the road.

The cabin is also very practical: there’s even the ability to recline the seats — including the seat base — allowing driver and passenger to chill out and relax when the car’s charging. And with a wheelbase of 2,900mm, there’s plenty of space inside the cabin.

Boot space? Pretty impressive. There’s 520 litres of luggage space with the rear seats in place. This rises to 1,300 litres with the rear seats folded down. In the rear-wheel drive models there’s also an additional 52 litres of storage space at the front. And though this drops to 20 litres in AWD cars, it should be enough to tuck away the car’s charging cables. It’s clever – which basically sums up the Kia EV6. 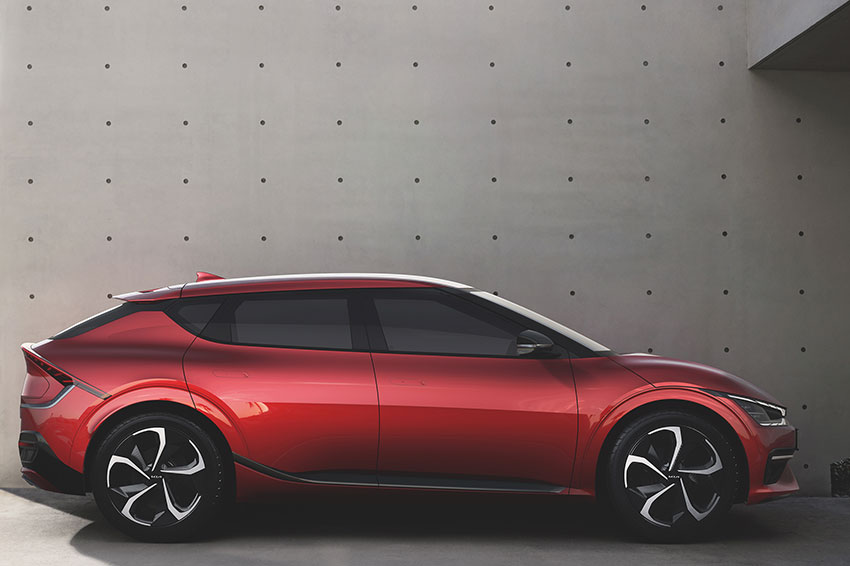