The stuff of electric dreams, built for the real word 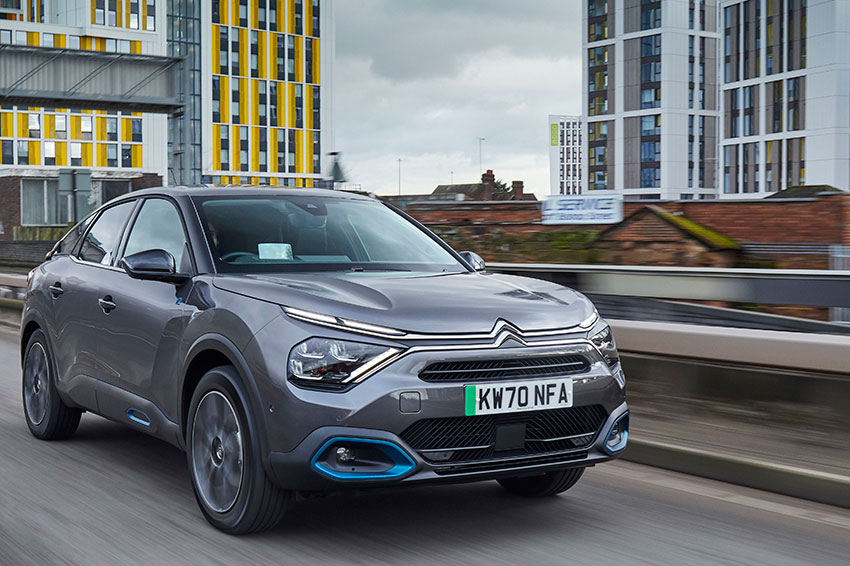 There’s no getting away from the fact that buyers now have a much larger choice of usable, versatile and — perhaps most importantly — affordable electric cars. As the big guns continue to enter the market, the design and practicality of models has improved dramatically, and prices have fallen. Now Citroën has entered the fray with its first attempt at an all-electric family car, the e-C4. The question is - is it any good?

First up, styling. Here, Citroën designers have nailed the brief, as it’s something of a head-turner. A few years ago, Citroën explained it planned to give its new models an SUV look without including the negative design aspects, such as excess weight — which raised the emission levels — plus a large frontal area.

I have to say, the e-C4 is one of the best-looking cars on the road. And the fact it’s available as an all-electric simply highlights how much the design of EV cars has moved on. No longer can you simply look at the shape of a car and sigh, “Yeah, there’s another electric car.”

Of course, it’s the same design as the rest of the latest C4 range, which is certainly no bad thing. Less aggressive than many of its crossover-type competitors, the C4’s styling benefits from a roofline akin to that of a fastback, and also lower-body cladding. Very smart.

Standing 1525mm tall, it’s 25mm taller than a Ford Escort, and with a length of 4.36m, it isn’t huge, especially for a car which sits in the VW Golf class. To put it in perspective, . it sits on the PSA Group’s smaller family car platform; think Peugeot 208, 2008 and Vauxhall Corsa. 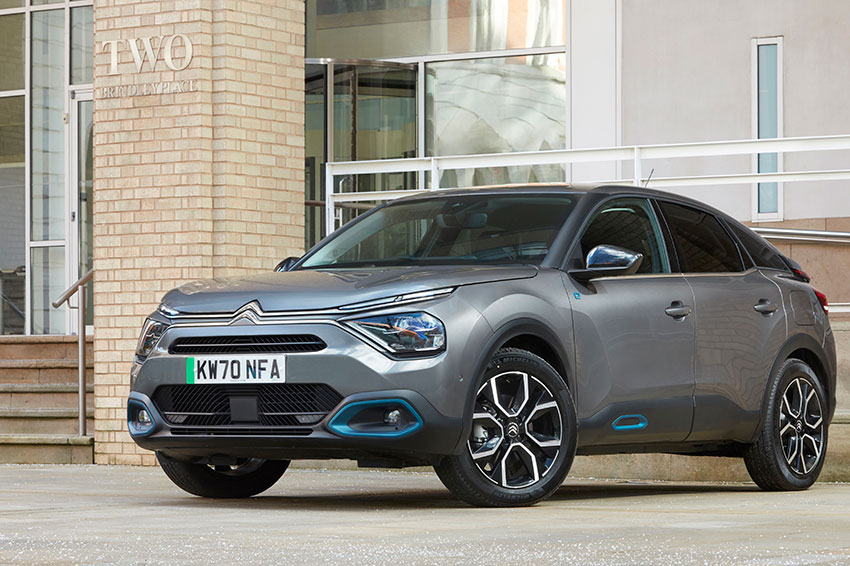 Ok, ok, what about the nitty-gritty?

I guess by that you mean range, performance and recharging. So, let’s cut to the chase. The 50kWh battery is tucked beneath the floor and has a 134bhp electric motor which delivers the power to the front wheels. It has an official WLTP range of 217 miles.

Is that enough? Personally, I think so. But, of course, it simply depends on how you plan to use the car. If you plan to use the e-C4 primarily in the urban environment, or regularly on a set-mileage route, then the range is perfectly adequate. If you’re travelling further afield, say on a ‘staycation’ this summer, then you’ll need to be ready to recharge.

Here there’s more good news. The e-C4 supports up to 100kW rapid charging. That means at a decent charging station, you’ll refill 80% of the battery in 30 minutes. Ideal for the holidays.

Home charging via a Type 2 cable — included free of charge — and a regular 7.4kW charger, means seven-and-a-half hours to charge from 10% to 100%. Citroën will also throw in a Pod Point Solo Smart Charger from launch for all e-C4 customers.

Have you forgotten about the performance?   Nope. The bare figures don’t tell the full story: 0-62mph in 9.7secs, and a max of 93mph. The e-C4’s focus is on how it delivers that performance. Sure, you don’t get the mighty surge off the ‘start line’ you get from many electric cars, but really, who needs that in everyday city centre driving?

Citroën has taken a typically Gallic approach to speed delivery. It’s not exactly laid-back, but it’s certainly smooth and serene. It gets up to cruising speed quickly enough, and around town it’s more than nippy: 0-30mph will still startle some rival drivers. 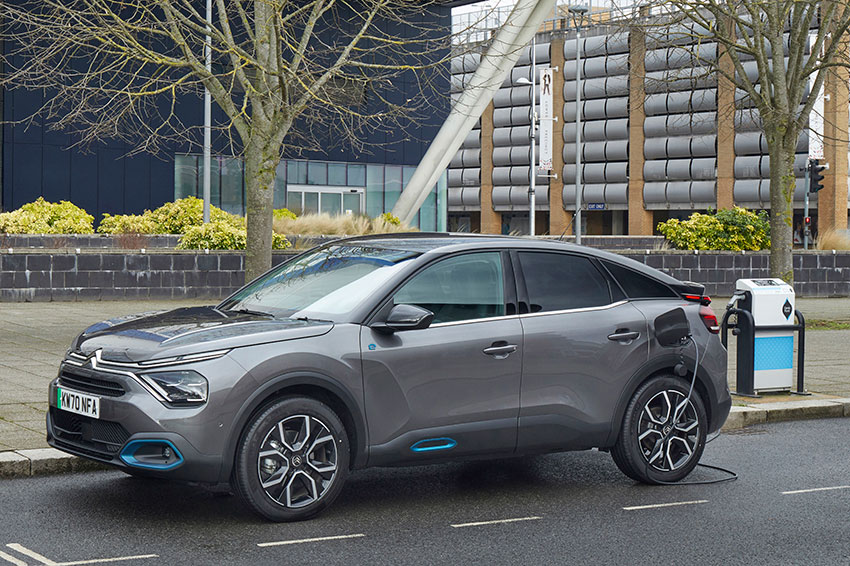 The e-C4 driver meanwhile gets two pedals and a small, simple gear selector. There’s also the option of a B mode; this gives greater lift-off deceleration but doesn’t officially allow for one-pedal driving.

That said, within a few minutes in B-mode, you’ll find yourself cleverly trimming your speed simply by lifting your right foot off the accelerator. Sure, you have to read the road ahead and give yourself enough room, but once you get the hang of it, you’ll find you’re bringing the car to a controlled halt gracefully … without even touching the brake pedal. Honestly, if you’re in any way competitive, you’ll love seeing how you can maximise the regenerative-braking mode.

Anything else we need to know about the ride?

Yes: it’s focussed on maximising comfort. There’s no getting away from the fact Citroën has returned to its heritage for building smooth-riding cars. It rides, how shall I put it, gently. Aided by the generous sidewalls on the tyres fitted to the standard 18in alloys, steering is beautifully light, and certainly perfect for city driving.

And what about the cabin?

You sit high, but not SUV-high, meaning all-round visibility is excellent. There’s the latest version of Citroën's Advanced Comfort seats which are very comfortable and supportive in all the right places. In the rear there’s more than adequate knee and headroom, especially considering the C4’s sloping roofline.

The space in front of the driver is dominated by a newly -updated version of the all-digital dash and infotainment set-up lifted from the C5 Aircross. Smart-looking as it is, it does mean the driver needs to access many of the car’s functions through the touchscreen. Thankfully the designers have incorporated a shelf below the screen allowing you to brace your wrist and hand while on the move. And thoughtfully, there’s a row of physical buttons and knobs to operate the climate control. 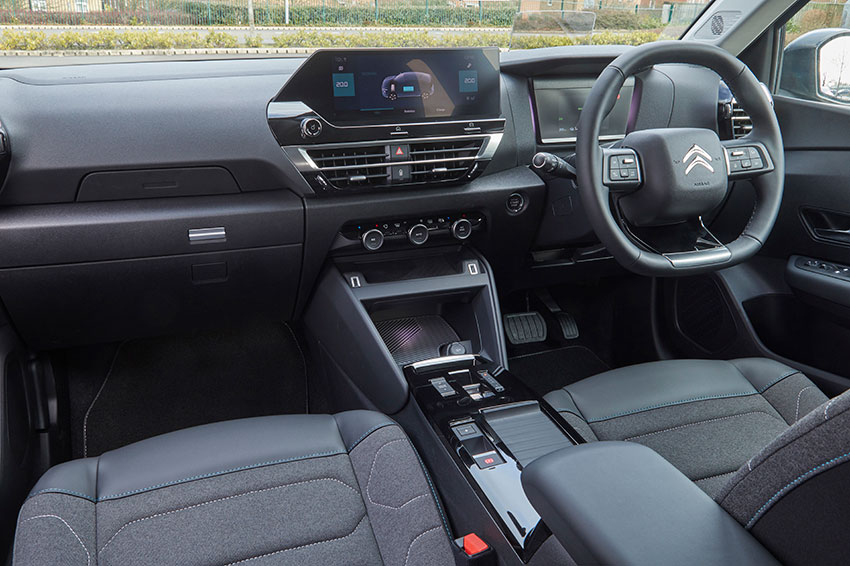 Storage nooks and crannies are in abundance in the centre console, plus there’s additional storage bins between the seats, and USB ports are readily accessible.

Boot space? With the rear seats in position, there’s space for 380-litres of clobber; for extra convenience and security, it’s a twin-level boot floor.

If you’re keen on entering the world of electric cars, but don’t want to scream about your decision, the e-C4 is certainly one to consider. Sure, there are the usual external blue decals and trim on the outside, but the e-C4 looks exactly the same as a ‘standard’ C4. That, as I’ve said, is no bad thing.

Citroën clearly believes its decision to focus on comfort and refinement will attract buyers. That, allied to generous standard kit, a free home charger, and competitive pricing, will add to the appeal. If you’re after a new electric car for the family
and can live with a range of 217 miles, then the e-C4’s certainly worth checking out. 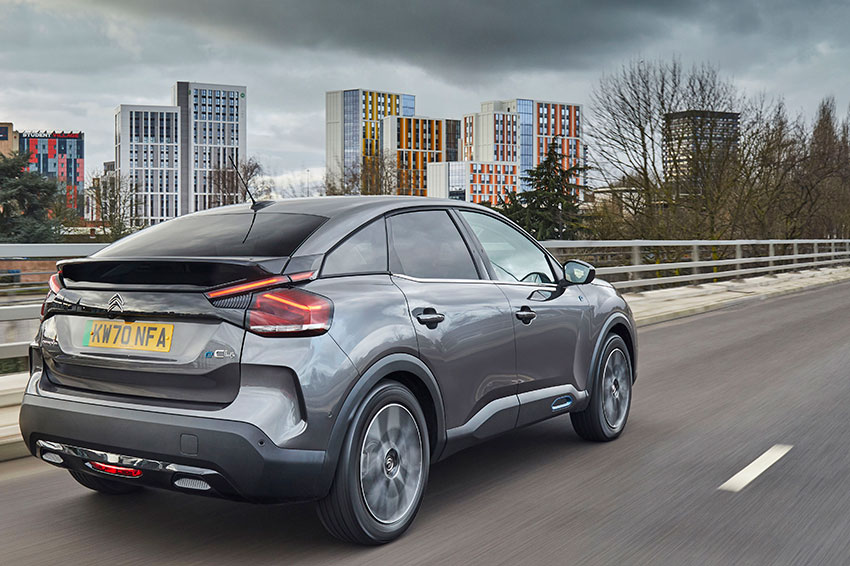 A veteran Scottish motoring correspondent, Jim McGill is a regular contributor to the Arnold Clark Newsroom.