Jim McGill goes for a test drive in the latest plug-in hybrid from the Japanese manufacturer. 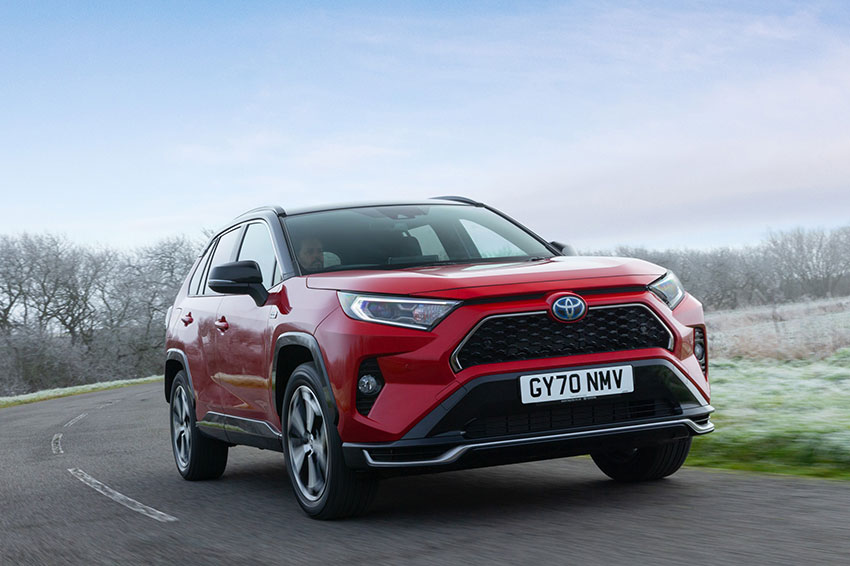 Sales of new petrol and diesel cars are set to end in 2030, but even now, with nine years to go, the car-buying public are becoming increasingly aware that change is needed.

Hence the surge in manufacturers introducing plug-in hybrids. It’s the concession to entice buyers over to full all-electric driving. And what’s this? With an electric-only range of 46-miles, quoted fuel figures of 282.5mpg, and 302bhp on tap, Toyota’s new RAV4 PHEV certainly sounds attractive.

In many ways, it’s similar to the standard RAV4 Hybrid. Under the bonnet is a 2.5-litre four-cylinder petrol engine, that in turn is mated to an electric motor. Together they drive the front wheels through an e-CVT. The rear axle is then driven by a smaller, second electric motor, thus ensuring all-wheel drive.

However, there are some significant differences. While the petrol engine in the PHEV delivers 182bhp (up from the 176bhp of the standard hybrid), there’s a whopping increase of 62bhp in the output of the front electric motor, up from 118bhp in the hybrid to 180bhp in the PHEV. On both cars, the rear motor produces 54bhp.

But it’s the dual-electric motor set-up and battery which take centre stage. Located beneath the rear seats, the large 18.1kWh battery helps lower the car’s centre of gravity and enhances handling. Total power then is rated at 302bhp.

Important to note – just in case you think I’ve got my arithmetic wrong – the engine and electric motors don’t produce maximum output at the same time, hence the lower combined figure. That said, the RAV4 PHEV is still the most powerful model in the range. 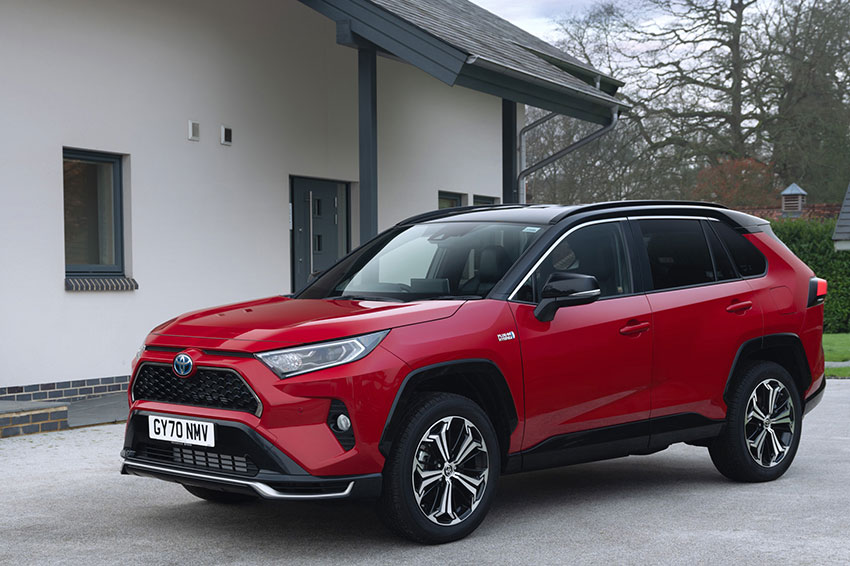 What about recharging the battery?

As usual, you have options. Unplug the kettle in the kitchen, plug in the RAV4 PHEV, and it’ll take 7.5 hours to recharge the battery. In contrast, it takes just 2.5 hours if you’ve got a 7kW wall box at home.

And there’s no denying that having a fully-charged battery is crucial in ensuring the PHEV performs to its maximum. More on that later.

And how does it drive?

In typical Toyota form, the RAV4 PHEV is an exceptionally clever piece of kit. Essentially it drives through its electric motors nearly all the time. Only occasionally does the engine send drive directly to the front wheels. Instead, its primary role is to generate charge.

On a day when the skies opened over Crawley – home to Toyota GB’s ‘press garage’ – I settled into the carefully sanitised cabin to head off into the grey bleakness, the 90-mile test route across West Sussex awash with surface water.

Push the starter button and, as expected, there’s total silence. From start-up, the RAV4 defaults to EV mode if there is enough charge in the battery. The driver can select from four modes: pure electric; EV/HV, which cleverly shuffles automatically between fully electric and hybrid power; HV, which delivers solely hybrid running; and finally, charging mode. The latter, unsurprisingly, makes sure the engine tops up the battery on the move. 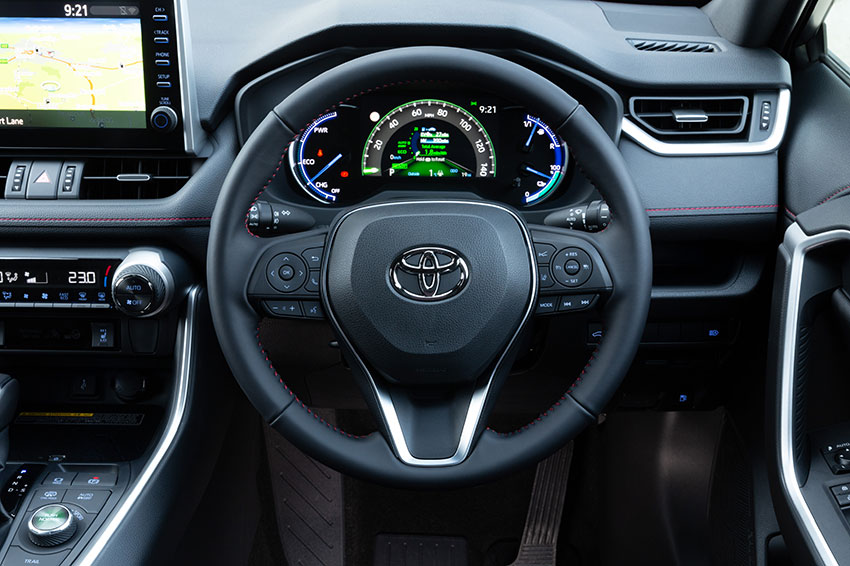 In pure electric mode, top speed is limited to 84mph, and the RAV4 is set up to run its full battery charge at the start of any journey. Even if you hit the kickdown switch to accelerate swiftly, the petrol engine won’t kick in. Despite that, Toyota says that when running solely on battery power, it’ll cover 0-62mph in 10 seconds. With the hybrid delivering, that time falls to 6.0s. It’s quick.

It’s also worth highlighting that when in EV/HV mode and your right foot is asking for quick acceleration, the transition from one power source to another is pretty much seamless - it’s unlikely that you will even hear the hybrid motor easing itself in. Sure, if you stand on the accelerator for 10 seconds or so, you’ll hear the change, but in normal, smooth driving, the switch is barely noticeable.

Is the electric range enough… and 282mpg?

Anyway, back to the driving. The first part of the route was a combination of dual carriageways, flowing countryside A-roads and 20-30mph sections through villages. Without making a conscious effort to maximise the electric range ¬– though I was in Eco mode rather than Sport mode, which was more than adequate for the drive – the battery delivered 41 miles, rather than the official 46 miles, before the hybrid eased itself in.

Clearly, for the majority of people, whose daily drive is less than 40 miles, fuel costs would be negligible. Just plug it in at night, drive the next day, and plug it back in when you get home. Visits to a petrol station would become a thing of the past.

Even by the time I returned to Crawley, having completed my 90-mile trip, the onboard computer informed me I had averaged 78mpg. Ok, it’s not the ‘official’ 282mpg, but these figures never represent ‘real world’ driving. 78mpg for a large 4WD SUV, especially in miserable wet and cool conditions, has to be attractive. 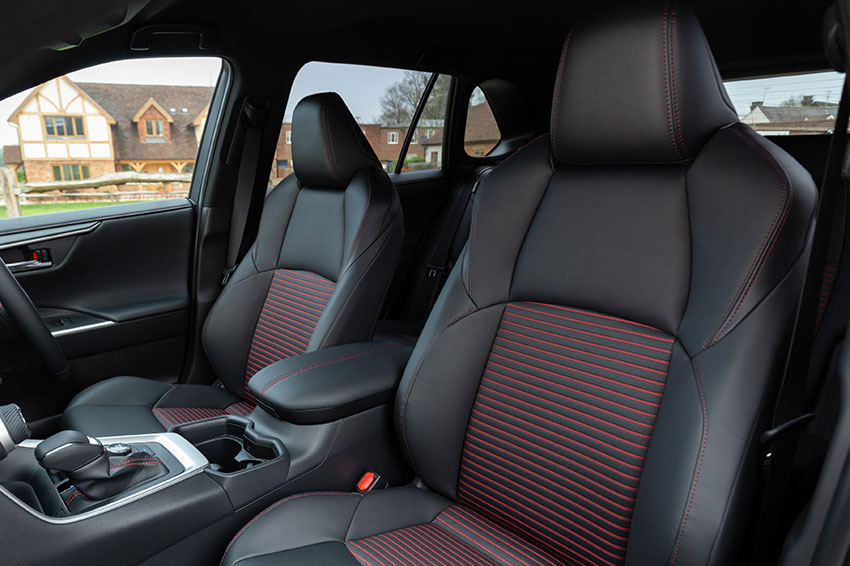 There’s no denying the technology is impressive. The important trio of electric range, efficiency and performance are all strong. Invest in a wall charger for home, and you’ll be laughing.

Throw in the fact that the PHEV has all the additional, traditional benefits of a RAV4 – comfortable ride, smart handling, a well-equipped cabin, plus acres of space – especially in the rear – and an enormous boot, and it’s clear it should be on the ‘test list’ of anyone in the market for such a vehicle.

What about the cost?

There’s no denying the RAV4 PHEV is not cheap. It starts at £47,395 for the Dynamic trim, which Toyota believes will account for around 70% of the RAV4 PHEV’s sales. The Dynamic Premium — which adds black leather upholstery, heated and cooled electrically-adjustable seats, and a panoramic roof — raises the bar to £50,895. This catapults it among some pretty severe competition, including the plug-in Land Discovery Sport and Volvo XC60 T6 Recharge.

Nobody ever said buying a plug-in hybrid four-wheel drive SUV was ever going to be easy. 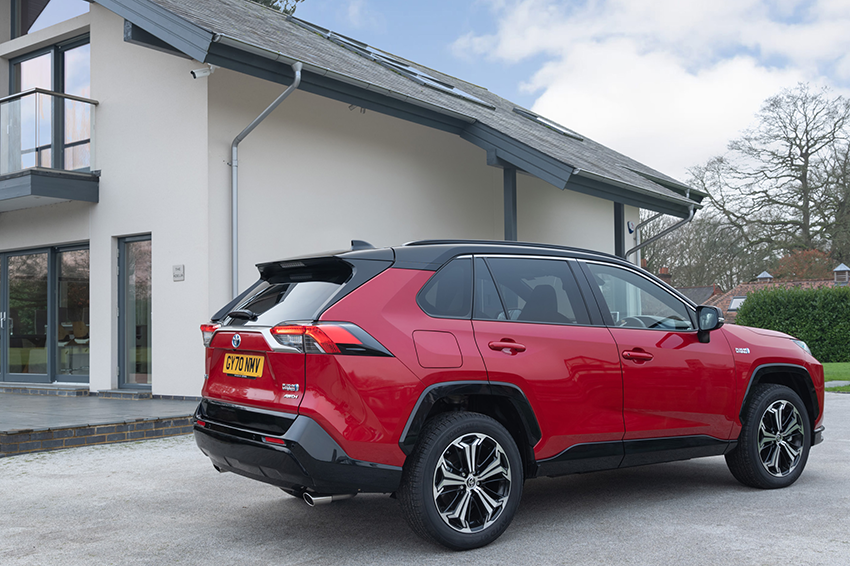