Ford hopes its Fiesta will return to the lofty heights of Britain’s best-loved car. 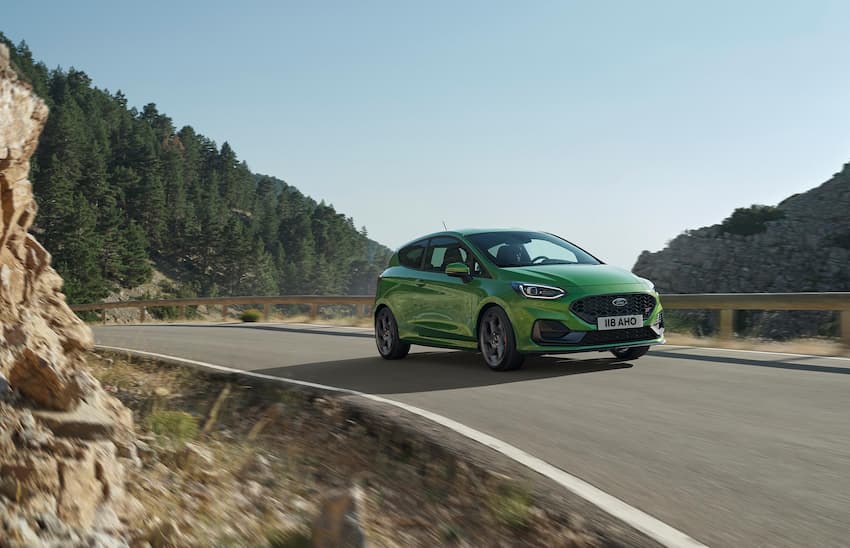 The facelifted Ford Fiesta for 2022

The Ford Fiesta has long been considered one of the UK’s best-selling and most popular hatchbacks, but with fierce competition from the likes of the Vauxhall Corsa and the Volkswagen Polo, Ford has decided to give its flagship model a comprehensive upgrade for 2022.

Excitement is certainly building around the release of the revamped Ford Fiesta next year, with upscales across all five trims – entry-level Trend, level-up Titanium, ST Line, the sporty ST hot hatch, and Active – the latter being the Fiesta in compact SUV form.

The Vignale trim is no longer available but still exists as an optional pack, which offers 17- or 18-inch alloys, Sensico synthetic (or faux) leather seats, and interior trim details such as vivid red stitching which contrast beautifully against the cabin’s dark upholstery. 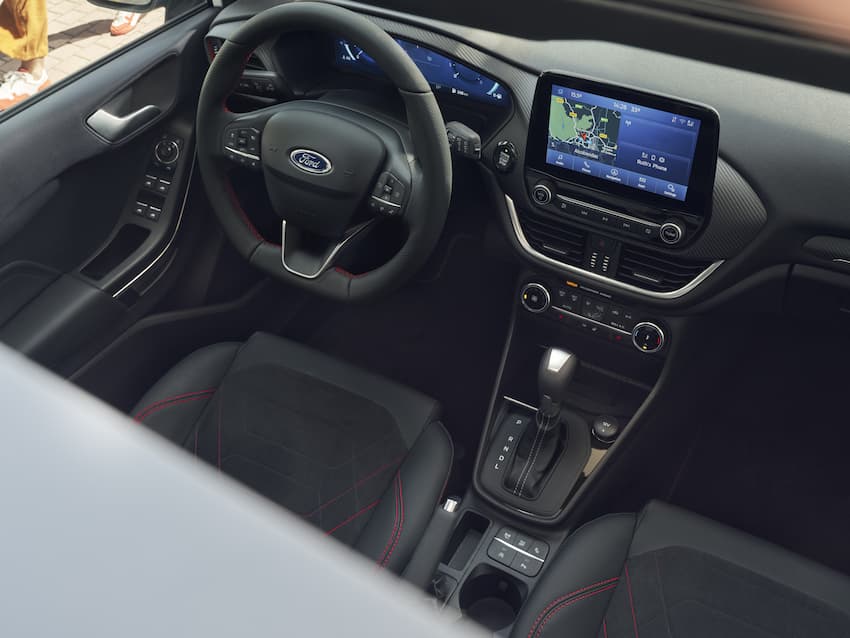 The front-end aesthetic is noticeably different, with an expansive, gloss-black, honeycomb-pattern grille with elliptical Ford badge placed inside (as opposed to stuck above as in previous incarnations.)

The Fiesta’s headlights now have a more serious shape as well, with almost hairpin-like LED headlights – apt for a car that’s renowned for urban nimbleness in tight city lanes and putting in a respectable performance on windier country stretches.

Just below, sporty front bumpers emphasise this change, with each trim gaining its own unique style.

Other striking alterations include smart LED lights as standard (which can be upgraded to Matrix adaptive driving beam LEDs), a reshaped bonnet, darkened rear lights, as well as new colour options including elegant shades such as Beautiful Blue, Boundless Berry – and in the ST Line – Mean Green. 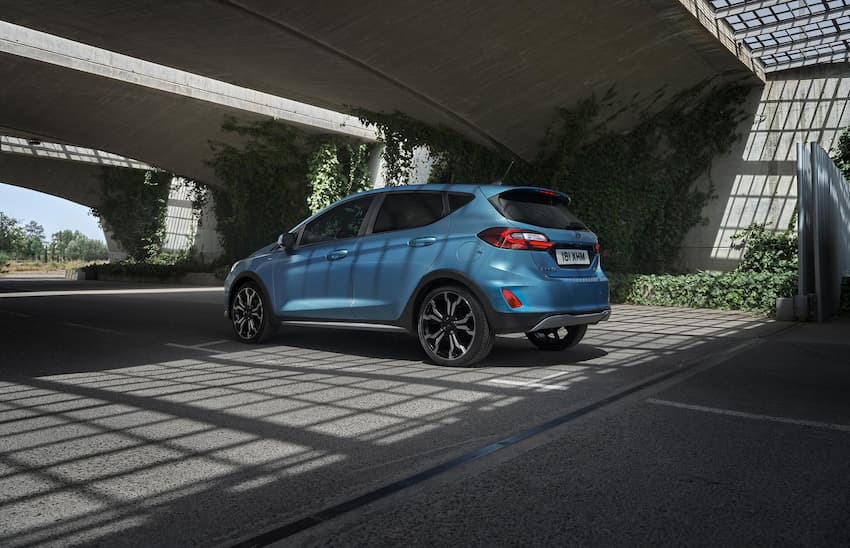 Rather than making drastic changes to the Fiesta interior, Ford builds on what was a solid and comfortable cabin with some added quality of life changes. Fiesta drivers can now personalise their in-cabin experience with a new, fully configurable 12.3-inch digital instrument display, a truly immersive feature with aspects such as live local traffic and speed limit updates, as well as the usual driving data and vehicle condition info. This all add up to reinforce the new Fiesta’s high-end feel, built on humble principles.

This stunning installation is complemented by the Fiesta’s 8-inch infotainment system, located in the centre of the dash, which boasts Apple CarPlay and Android Auto app pairing capacity.

Across the Fiesta range, driving modes consist of the probably familiar Normal, Eco, and Sport, and depending on which mode you choose, the aforementioned digital display’s graphics will change, which always looks neat and intuitive.

In the Active trim, which is styled as a compact SUV, there are two additional driving modes, called Trail and Slippery, designed for undulating or sodden driving surfaces.

Safety at its heart

After that impressive array of tech, you might be thinking it’s always party time for the Fiesta makers, but Ford have made sure this car, associated mainly with (but of course not exclusive to) younger generations, is serious about safety. This is to drive home the idea of a Fiesta with universal appeal, and indeed practical feasibility.

Let’s start to look at this arsenal of tech by homing in on the Fiesta’s wrong-way alert, which lets you know if you’re on the wrong side of the road. And for when you’ve stopped the Fiesta, its rear occupant alert reminds you if there are rear passengers (or pets) left in your car. The tool is there and is sure to be useful – but perhaps it’s best to try and remember any precious rear-seated cargo by yourself!

Elsewhere, the Fiesta is fitted with an array of intelligent features – adaptive cruise control, automatic emergency brake, blind spot monitoring and lane-keeping assistance – reinforcing the car’s maturity and sophistication, which is surely designed to appeal to those drivers beyond the Fiesta’s traditionally youthful core demographic.

While there are no fully electric options across the new line – one petrol and two mild-hybrid options – the entry-level 1.0-litre, three-cylinder EcoBoost petrol engine provides a spritely 99bhp, and a respectable fuel economy of 45 mpg.

Along the line, the 1.0-litre, three-cylinder EcoBoost mild-hybrid petrol option powers through with either 123bhp or 153bhp – both delivering 48 mpg – evidently using the same engine but with the addition of a belt-driven starter-generator and a 48-volt battery for extra power and efficacy.

As for the range-wide picture, that old saying that ‘it’s not a popularity contest’ need not apply here; after being dethroned by a category rival in the UK in 2021, Ford is intent, with the widespread improvements across the car in terms of high-end tech, sporty kick and exterior flair, on returning to top spot as the UK’s favourite car. As these offerings show, the model is clearly in a good position to do just that. 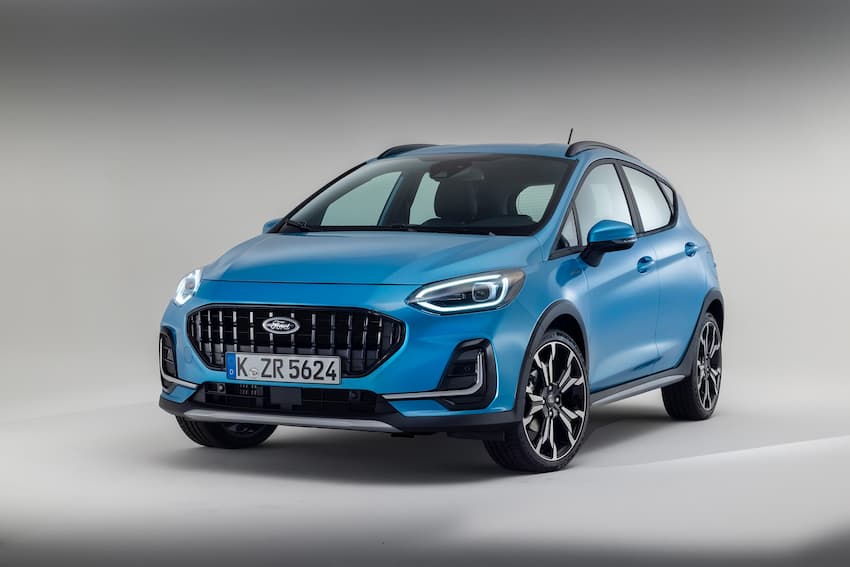