Check out BMW's first all-electric car in almost a decade. 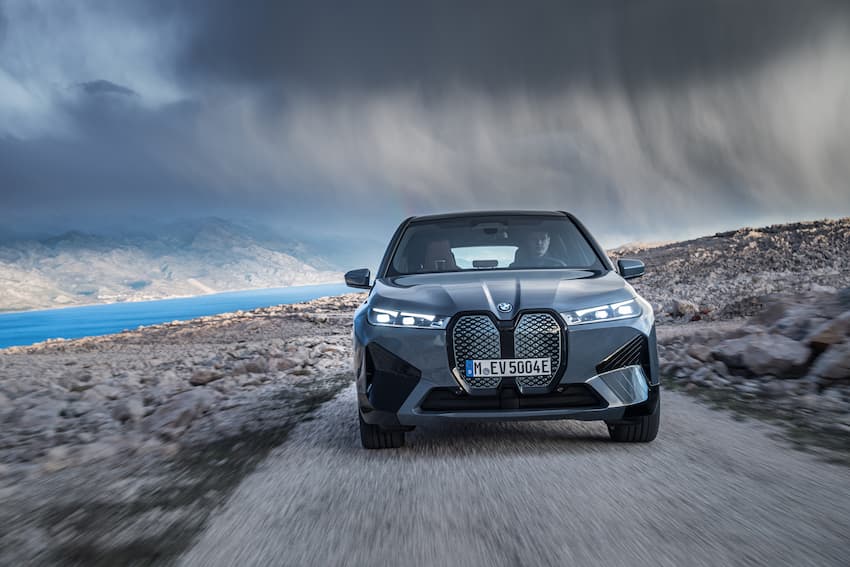 When you think of BMW, you might think of their classic heritage or perhaps their high-performance models, but, as times change and the automotive world goes 'green', the company has launched an ultra luxury range-topping electric flagship, the BMW iX.

The iX is the first all-electric car since the i3 launch in 2013 and ushers in a new chapter for the BMW brand in both looks and the platform on which future BMW's will be built. Based on the iNext concept showcased at the Pairs Motor Show in 2018, the fully electric EV is marketed as a Sports Activity Vehicle (SAV), highlighting its dynamic and lifestyle qualities, as well as being filled with the latest on-board technology.

Famed for its engineering prowess, BMW have managed to develop an impressive all-electric SAV, which takes on competitors with the latest in technology, comfort and styling.

The new iX is very similar in size to its sister, the X5. For a large vehicle, it presents a sporty feel with distinctive looks, with sleek front lights and large air vents. Opinion has been split on the new styled kidney grille, however, in context with the rest of the car, it looks good. From a distance, the grille looks as though it has traces of carbon fibre. However, in actual fact, it's plastic coated with a thin layer of polyurethane, which if you apply heat to, has the power to self heal, so, stone chips and scratches simply vanish. And if that wasn't impressive enough, BMW have discreetly integrated cameras, radars and sensors behind the grille itself. 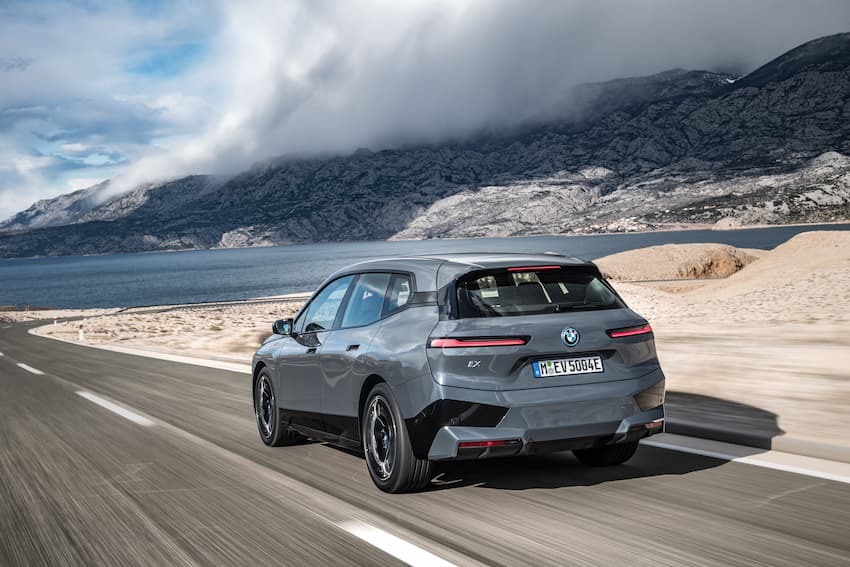 The iX has an interesting quirk, in that you can't actually open the bonnet. However, to fill up the windscreen washer, all you have to do is pop open the front badge.

Keeping with the sporty feel, you get 21-inch alloys as standard or optional 22-inch, though they do look slightly small given the size of the car. There are flush side panels, with frameless windows and electrically operated door handles with soft close.

Rear C-pillars are accompanied by a sleek spoiler and the rear lights mirror those of the front, plus the rear BMW badge houses a high-resolution reversing camera. Given the size of the car, the boot space is a little smaller than some rivals; this is because extra rear lights have been integrated into panels to help with safety. You do still get 500 litres of space, which dramatically expands if you electrically fold down the rear seats. 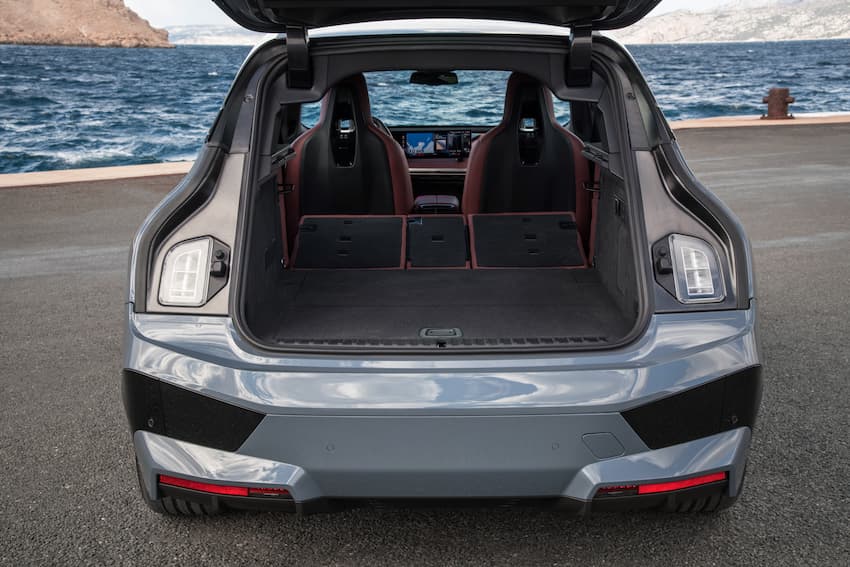 Because the battery is underneath the floor, three large adults can sit very comfortably in the rear leather seats with plenty of leg and headroom to spare. They also have their own climate controls. The headroom is helped by a huge panoramic glass roof, which can be frosted over with the touch of a button. There's isofix points for child seats and the iX holds a five-star safety rating from Euro NCAP.

There's considerable ingenuity in the iX's engineering, design and technology, none more so than inside the cabin. It's nice to see BMW allowing its designers to be fresh and creative. The hexagonal steering wheel might take a little getting used to though. 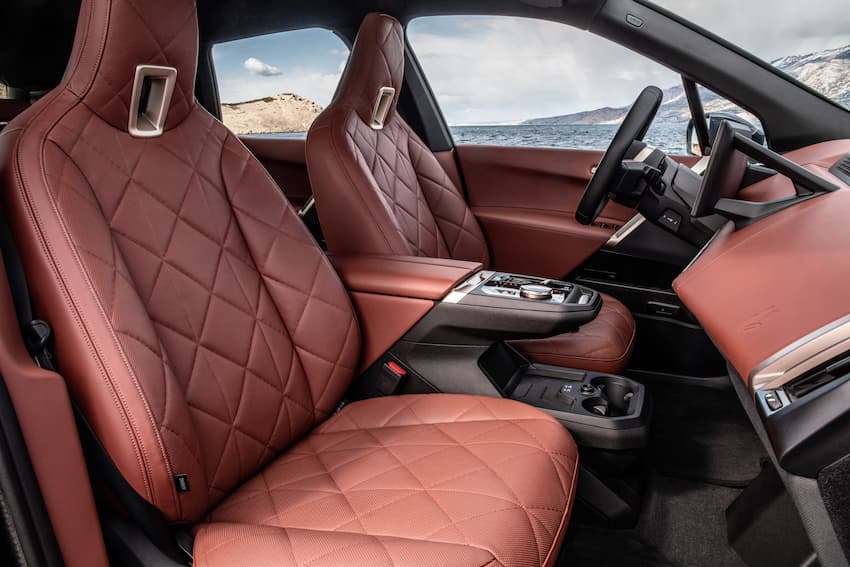 There's a minimalistic feel to the cabin, which contrasts well with a huge, curved digital display angled towards the driver – a nice touch that adds a sense of luxury. The digital display comprises of a 12-inch screen for your driver information and a 15-inch screen for all your infotainment. It's touch screen and also uses BMW's gesture control, or you can control it using the next generation iDrive 8 system via a driver’s panel, which also neatly integrates shortcut buttons for the infotainment and apps.

Due to BMW's minimalistic approach, there aren't any buttons on the dashboard, meaning you have to operate everything through the display screen; from the excellent augmented reality sat nav to heating. It can be a little confusing at first glance, however, once you get your bearings, it's easy to navigate and use and is customizable. You can connect and use Apple CarPlay and Android Auto with ease. 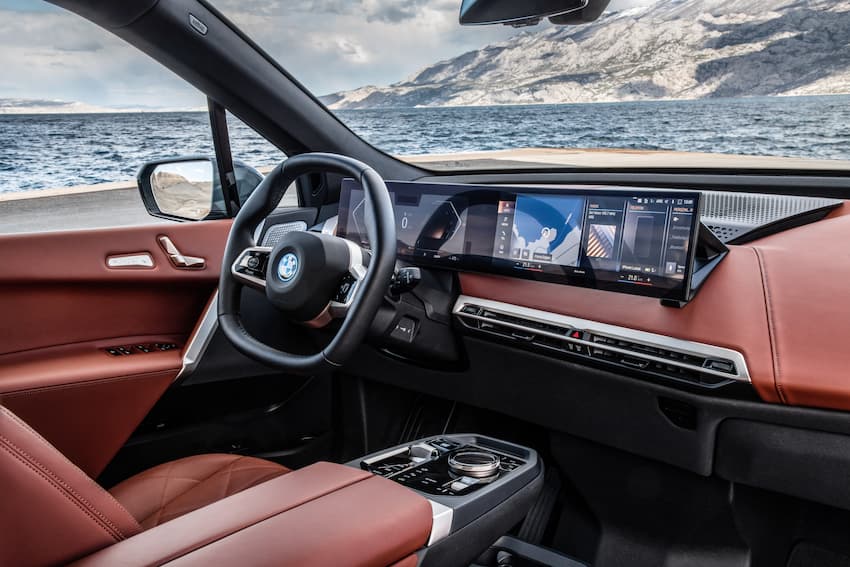 There's a sense of equanimity in the cabin, as you're surrounded by sustainable leather and refinement. Because it's built on an electric platform, there's plenty space up front, with easy access to a mobile phone charger pad, cupholders and auxiliary ports.

As you'd expect, there's a plethora of equipment and safety features as standard.

Visibility is good with a clear view and the seating is excellent with a multitude of adjustments which are operated from controls on the door panel. 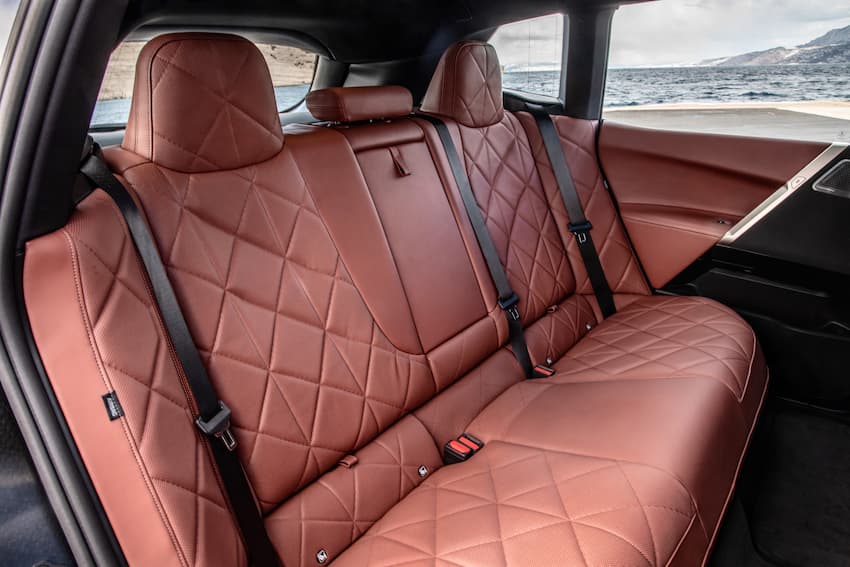 Legendary Academy Award winning composer Hans Zimmer has collaborated with BMW to provide the range with aesthetic sounds befitting the vehicles. Fear not, his renowned movie themes won't suddenly sound every time you hit the accelerator.

On the road, the ride quality and refinement are as you'd expect from a luxury BMW. The iX delivers across the board, providing excellent ability and precision on A-roads, motorways to country lanes. It offers confidence and assurance behind the wheel.

Despite being big and weighing in at 2.4tons, it doesn't feel it. In fact, it's effortless to drive and can shift when it needs to. Adaptive air suspension is standard with various settings, and it's on point and very smooth. It rides over undulating roads and bumps with ease and grace.

The iX comes with an intuitive state-of-the-art 360-degree camera system. 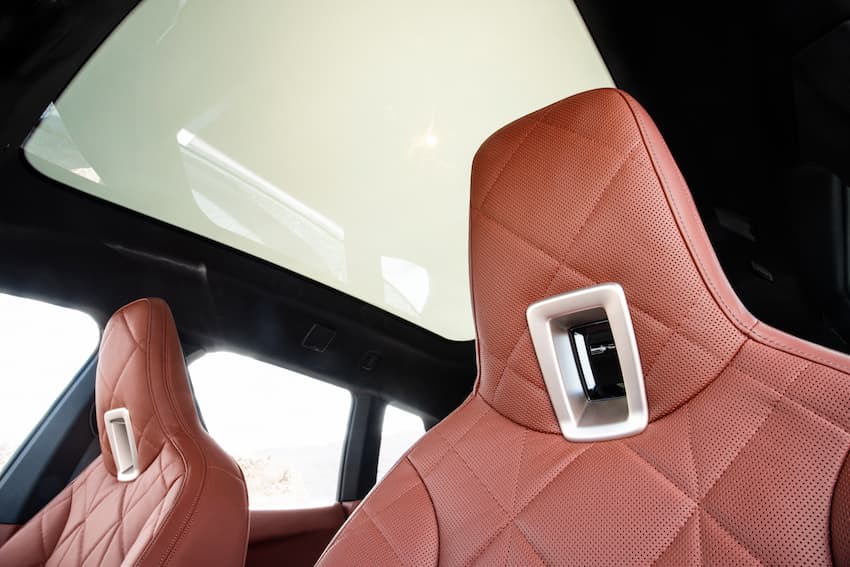 Because the battery packs are low down under on the floor, you end up with a low centre of gravity, which helps produce an excellent drive behind the wheel. Road noise and wind noise are non-existent, and you barely hear any noise encroaching the cabin from the electric motors. As you'd expect from a luxury BMW refinement is top notch. The brakes are progressive and steering is light – aided by rear wheel steering (especially on tight roads). The heads-up display is clear and crisp.

There are three models in the current line-up. The entry xDrive 40 model produces 326hp, has a 71 kWh battery and according to BMW will deliver around 250 miles on a single charge with 0-62mph in 6.1 seconds. The xDrive 50 has 523hp, will do 0-62mph in 4.7 seconds and has a 105 kWh battery, which will do approximately 380 miles on a single charge. Both models come with Sport or M Sport trim levels. 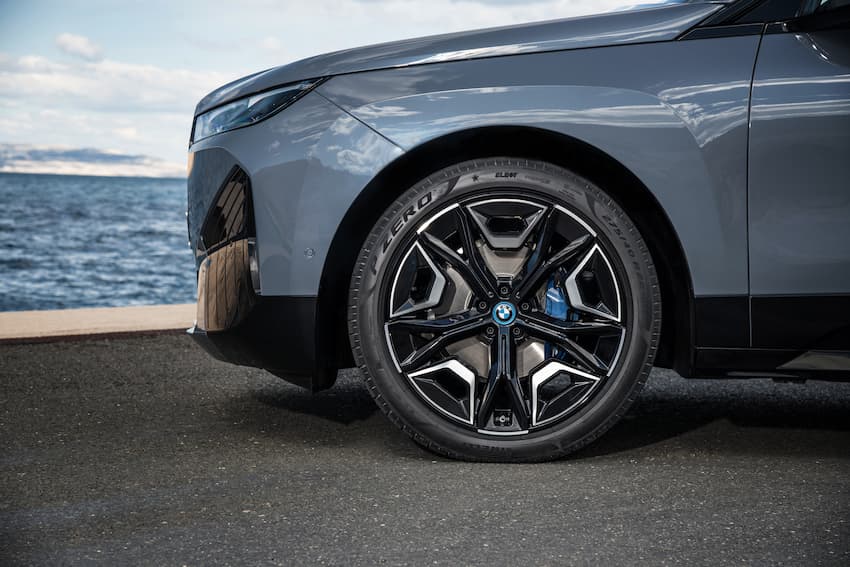 All models are dual powered and produce zero emissions. The xDrive 40 and xDrive 50 are very similar, differences being the size of the battery packs and the power of the electric motors. They're equipped with an intelligent all-wheel-drive system, making the iX the very first all-wheel-drive, pure electric vehicle produced by BMW. 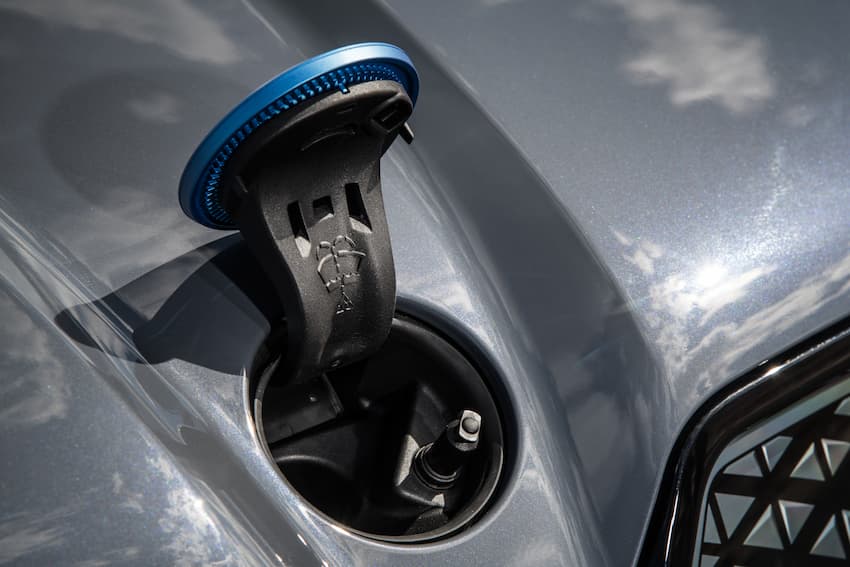 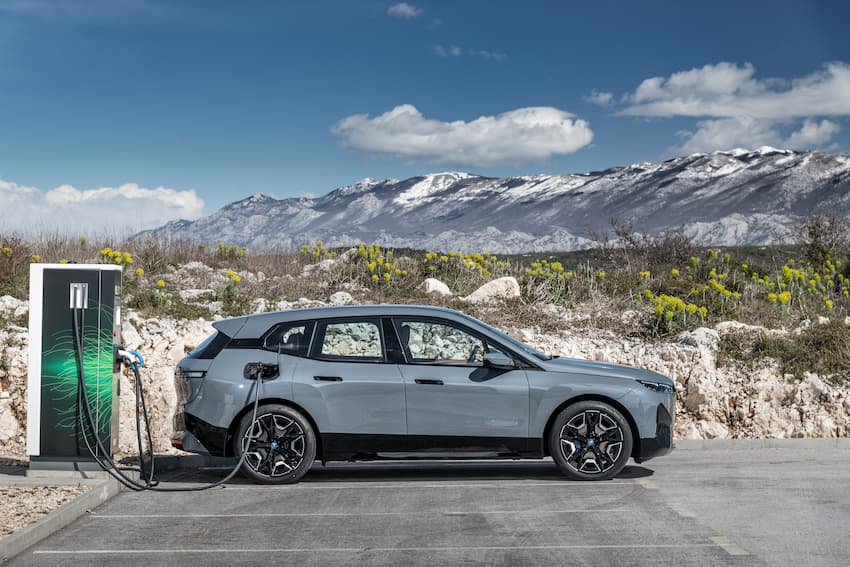 The standalone top-of-the-range iX M60 performance model comes with 619hp, reaches 0-62mph in 3.8 seconds and produces an approximate range of 350 miles on a single charge.

Now, the bigger the battery, the longer it is to charge. The iX will charge up to 200 kilowatts, so, for example, the xDrive 50 will charge from 10% to 80% in around 35 minutes. A wall box will take considerably longer. However, to be slightly more realistic, bear in mind that battery mileage figures on all models are dependent on use, weather conditions, driving style and traffic.

As you'd expect, there's a plethora of options available for the iX which can be found in detail on the Arnold Clark website.

There's no denying that the BMW iX is one of the best electric cars on the market. It's a superb EV and all-round SAV, combining practicality with great performance, comfort and the latest technology. The iX has set the benchmark for future electric BMWs. 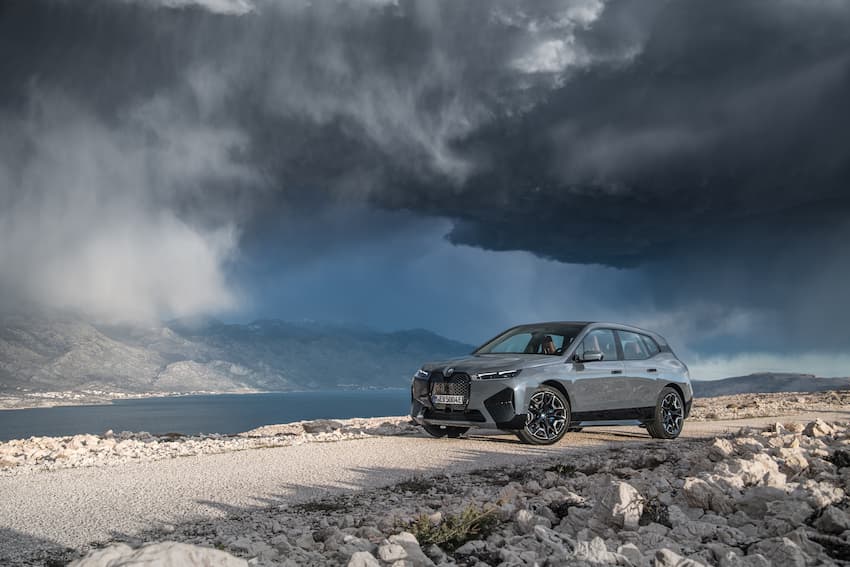