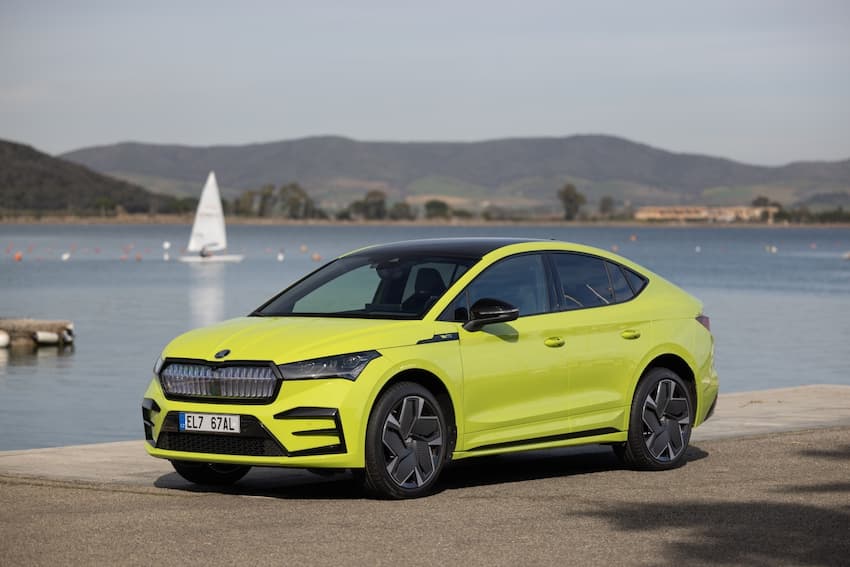 You don’t often come across an ultra-fast ŠKODA. But anything seems possible in this era of new car shapes and powertrains. And that is what we have here.

The vRS is ŠKODA’s attempt to create a ‘super’ version of its line-up. The auto manufacturer previously used the name on the Octavia, but the first car in this new dawn to wear the moniker is the all-electric ENYAQ Coupé iV.

It certainly looks the part. The shape – a swept Coupé-styled back – makes it stand out from the full-sized sister ENYAQ SUV. It really is a head-turner with hard-hitting styling, a sporty colour scheme and athletic characteristics. Any run-of-the-mill family hatchback looks wishy-washy next to it. 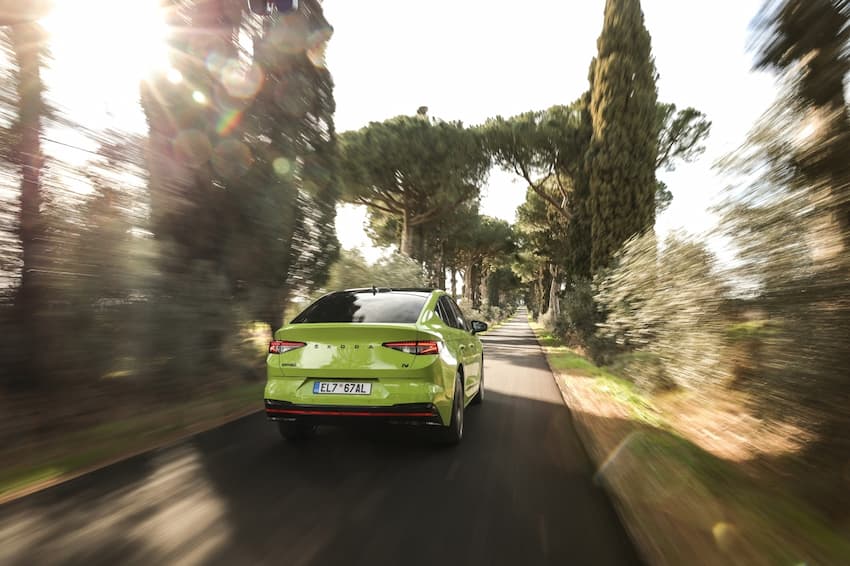 Eight different colours are on hand, but ŠKODA’s ‘flagship’ paint is a fluorescent tone called ‘Hyper Green’. It is striking, contrasting against the many blackened pieces of bodywork.

The powertrain produces 299PS thanks to a 77kWh battery operating a couple of electric motors, plus you get four-wheel drive. Its top speed is 112mph, with a 6.5-second 0-62mph time. 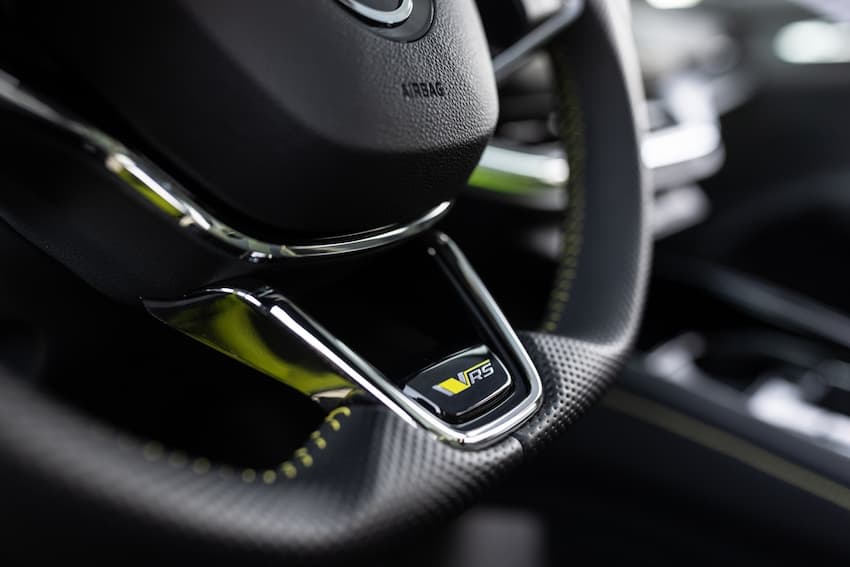 Flooring it off the line, the car shoots forward with impressive amounts of clout. Thankfully, an equally remarkable amount of traction keeps the vehicle going in a straight line while the headrest cushions the blow as you are thrown back into the seat. I didn’t expect this ŠKODA to be so ferocious.

Acceleration certainly is not a problem, then. Making progress is a doddle around town or on the motorway, and overtaking is easy. This is especially notable given the Coupé weighs over two-and-a-quarter tonnes.

Alas, while this vRS is excellent in a straight line, it isn’t so adept at cornering. Bendy B-roads won’t be a pressure unless you are overeager, but it is no supercar or hot-hatch, and if you push it, it understeers on entry.

Despite the ENYAQ Coupé iV vRS’ limitations, ŠKODA has done the best it can. Only so much can be done, especially with batteries contributing much of the excess weight, not to mention the vehicle’s hefty size. At least the batteries are housed low down, which helps with stability, and, regardless of the large wheels, the ride is satisfactorily comfortable.

There are various driving settings that adjust the suspension stiffness. These include a customisable mode called ‘Individual’ to set up different elements of the car, depending on what you fancy.

The steering is light and direct, firming up at higher speeds and when in Sport mode, but there is not a colossal amount of feedback. 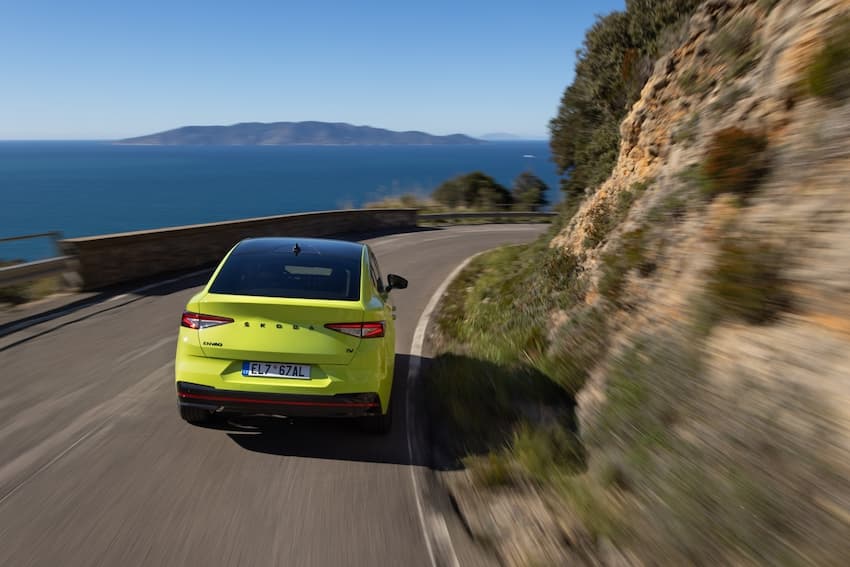 Inside, you will be impressed, as the interior of the vRS looks as good as the exterior. It holds inviting, comfortable sports seats, a good blend of materials and colours, plush surfaces, and storage spaces. Furthermore, the dashboard is shaped so that it maximises space for the front occupants.

Styling features are provided with modest amounts of silver and piano black, while the infotainment system is blessed with intuitive menus and a responsive touchscreen. The most critical features, such as the cabin temperature, are always visible at the bottom of the screen for easy access. 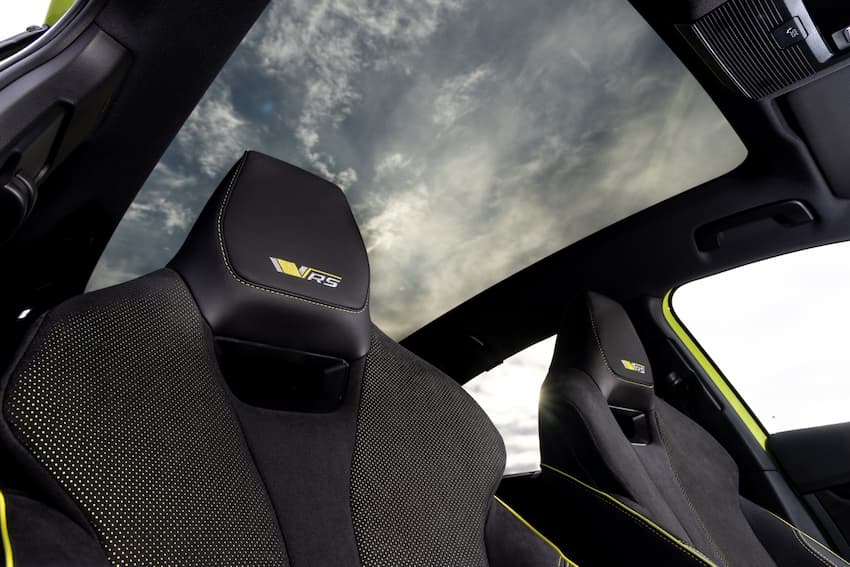 Tricky to use when on-the-move, the touch-sensitive slider adjusts the radio's volume. But thankfully, you can also change the sound level via buttons on the steering wheel. There are also more physical controls beneath the screen.

You won't feel hemmed in in terms of space irrespective of where you are sat. Legroom is plentiful, and, even with the panoramic roof and the sloping roofline, you will find good headroom in every seat. Meanwhile, a liberal amount of storage space is offered, including a removable tray in the back in lieu of the traditional hump in the middle of the floor. 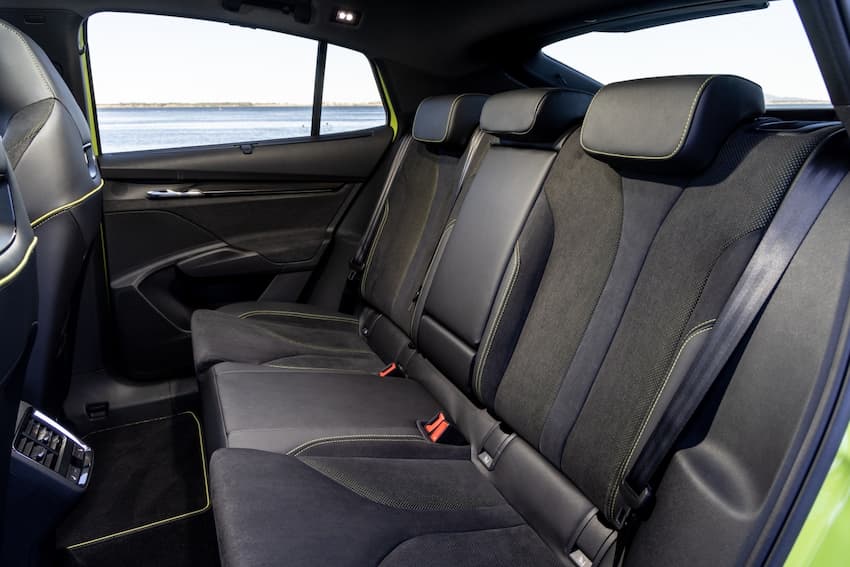 570 litres of boot space are on offer. In addition, the seats fold down in a 60:40 split, expanding the available cargo capacity to 1,610 litres.

Running costs are likely to be very low, too. Zero emissions mean low tax, so company car drivers can rejoice with free road tax for the foreseeable future. The Coupé only needs servicing every two years (or every 18,750 miles). Moreover, there is the obvious saving of not needing to visit the petrol pumps anymore.

You will get up to 312 miles of range, which is competitive against more expensive equivalents. Plus, a 10 to 80 per cent charge takes under 40 minutes at the maximum 135kW rate. However, a zero to 100 per cent charge will take 13 hours via a 7kW home wall box. 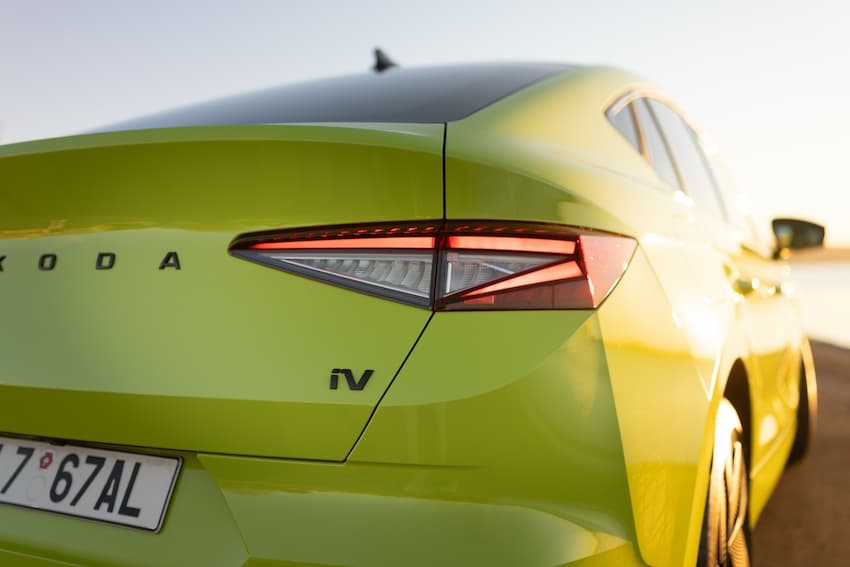 Euro NCAP awarded the ENYAQ a five-star safety rating (this was for the full-size SUV, but the grading is valid for the Coupé version) with a 94 per cent safety score for adults and an 89 per cent protection result for children.

But the vRS version is a novelty. The regular version is just as good, while the full-size SUV is cheaper and more practical.

So, really, the standard Coupé only appeals to those who want the looks – and the vRS version even more so. 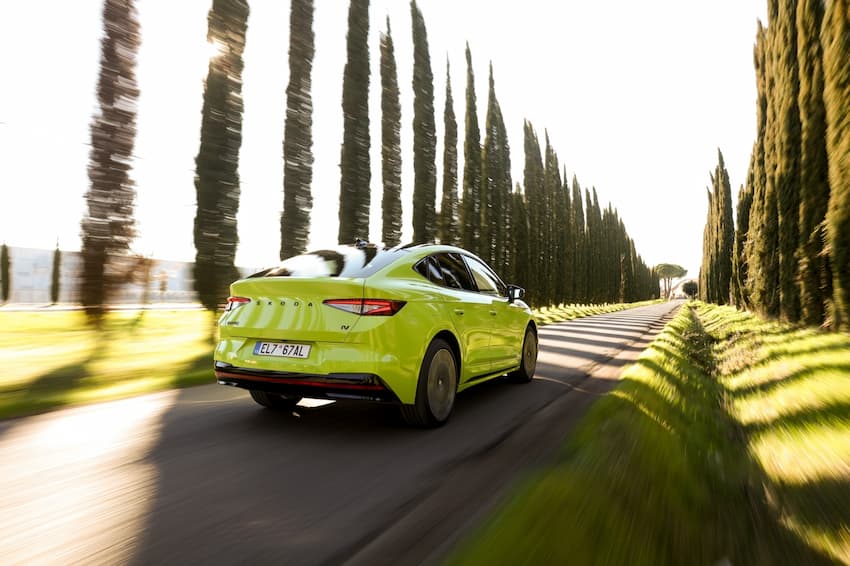