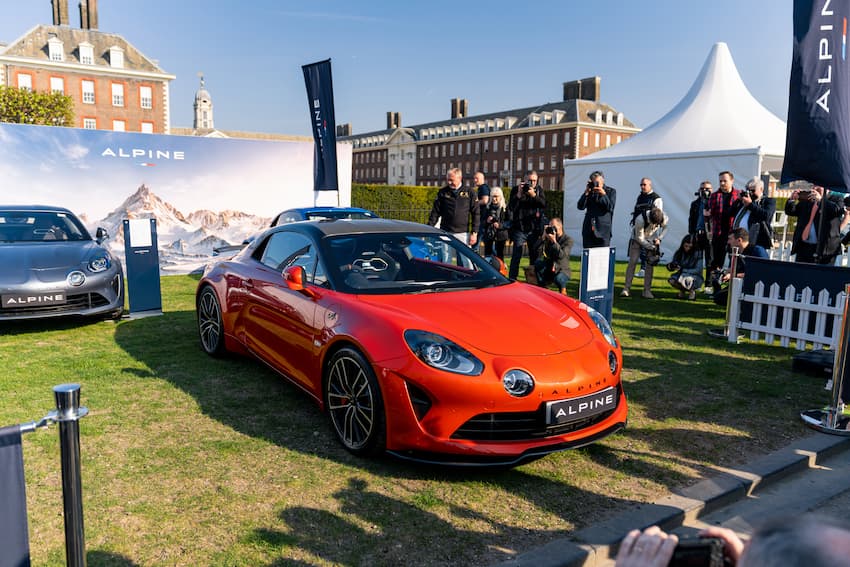 C'est magnifique... The much-vaunted Alpine A110.

Against the backdrop of the stunningly imposing Royal Hospital Chelsea, designed by Sir Christopher Wren in 1681 and completed 11 years later, the inaugural Salon Privé London delivered an eye-watering array of new car debuts. Ranging from hand-built, zero-emission, all-electric cars to the world’s most powerful luxury SUV, plus a surprise appearance by a Ferrari, London had it all.

In total, 12 new cars made their debut on the hallowed greens of the hospital’s 66 acres of beautifully manicured lawns rolling down to the River Thames in the Royal Borough of Kensington and Chelsea. And as the iconic red coats of the Chelsea Pensioners — worn proudly by the veterans of the British Army — punctuated the luscious green grass and the gleaming metal of the new cars, car lovers could be forgiven for rubbing their eyes in disbelief.

While a number of the debut cars’ appearances had been publicised beforehand, H.R. Owen Ferrari surprised attendees by bringing two Italian thoroughbreds, the Ferrari Daytona SP3 and the Ferrari 296 GTB, to the event for their UK static debuts.

Already labelled as one of the most beautiful cars of its generation, the Ferrari Daytona SP3 is the third in the limited edition Icona series. Paying homage to the mid-rear-engined Ferrari V12 sports prototypes that earned the famous marque its unparalleled motor sport status, it was first shown last November as part of the 2021 Ferrari Finali Mondiali, but has not been seen in public since. 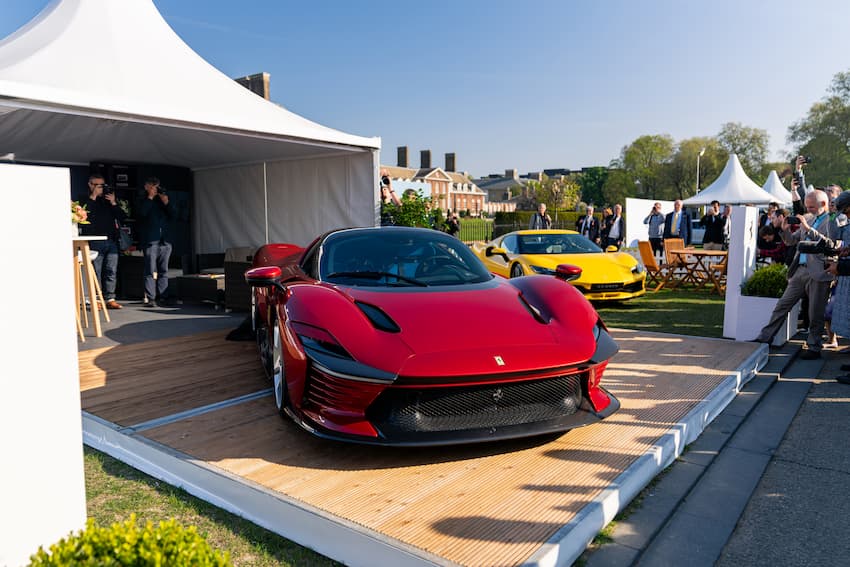 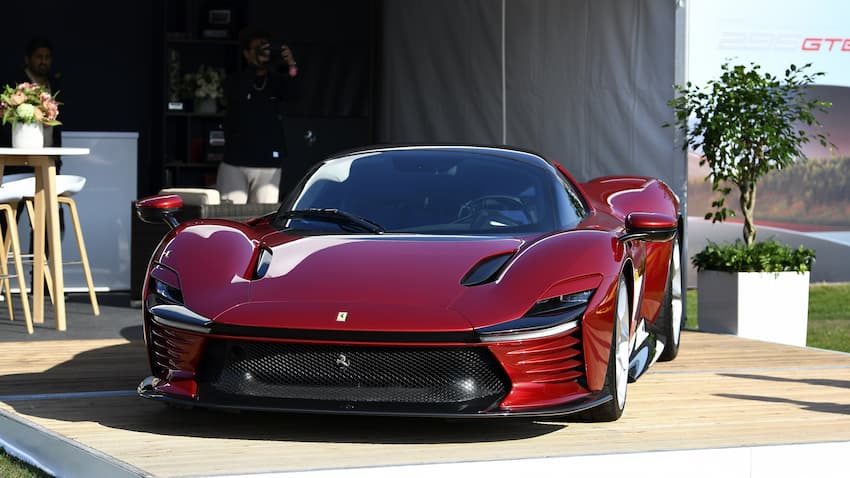 The 296 GTB, meanwhile, is the first Ferrari road car with rear-wheel drive plug-in (PHEV) hybrid architecture. Making its UK debut at the event, it boasts an exceptionally wide V6 design which helps contribute to the car’s overall compact dimensions. The internal combustion engine is integrated with a single electric motor; combined, they provide 818bhp, which catapults the Ferrari 296 GTB from 0-62mph in 2.9 secs. 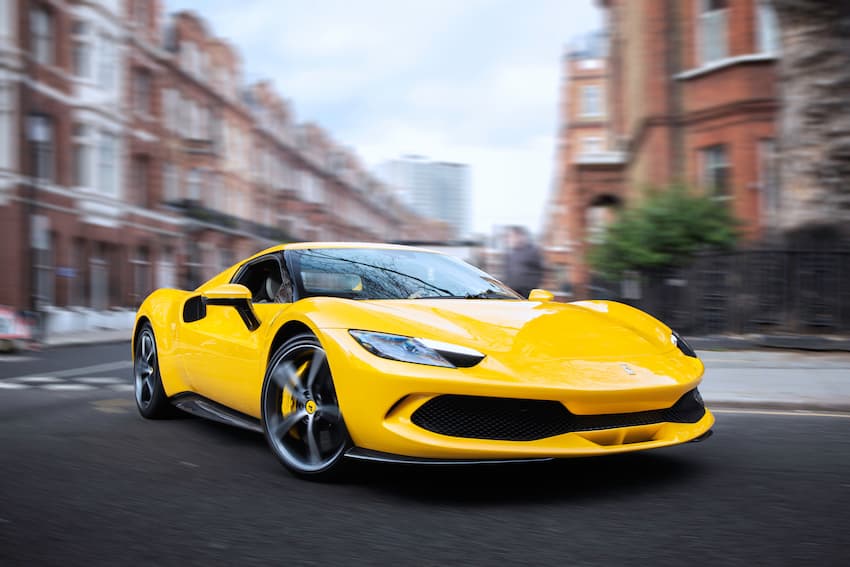 Not to be outdone in the bhp stakes, Slovenian racing champion Aljoša Tushek, who founded his hypercar company in 2008, gave a global public debut to his updated model of the Tushek TS900 Apex.

An advanced evolution of his cars which have previously been seen, and currently the lightest hybrid hypercar on the market, the Tushek TS900 Apex boasts the world’s highest power density drivetrain and utilises aviation-derived electric drive technologies. Combined, total output is more than 1350bhp in a vehicle weighing under 1,350kg. Just 36 examples of the unique and ultra-exclusive hypercar will be built.

In something of a contrast, Morgan gave a first public viewing of its new Super 3, which continues the Malvern-based manufacturer’s 113-year legacy of three-wheeled models. Powered by a 1.5-litre Ford three-cylinder engine, it significantly exceeds the power and performance figures of previous three-wheeled Morgan models. Prices start at £41,995.

Alpine, meanwhile, gave a UK debut to its new A110 range which has been updated with three distinct new versions, each boasting better performance and more equipment than ever before.

In the battle of the luxury SUVs, Land Rover unveiled its new flagship model the Range Rover SV. The first vehicle to wear the distinctive ceramic SV roundel, Land Rover says it “represents the apex of design and engineering expertise from the company’s in-house Special Vehicle Operations team and provides customers with a new level of craftsmanship as well as greater functionality”.

The Range Rover SV engine options include the new 530PS V8 Twin Turbo and the efficient D350 Ingenium diesel, as well as the 510PS Electric Hybrid on the standard wheelbase model, with an all-electric range of up to 70 miles. In addition to the five-seat configuration on LWB models, the optional four-seat SV Signature Suite configuration is also available. 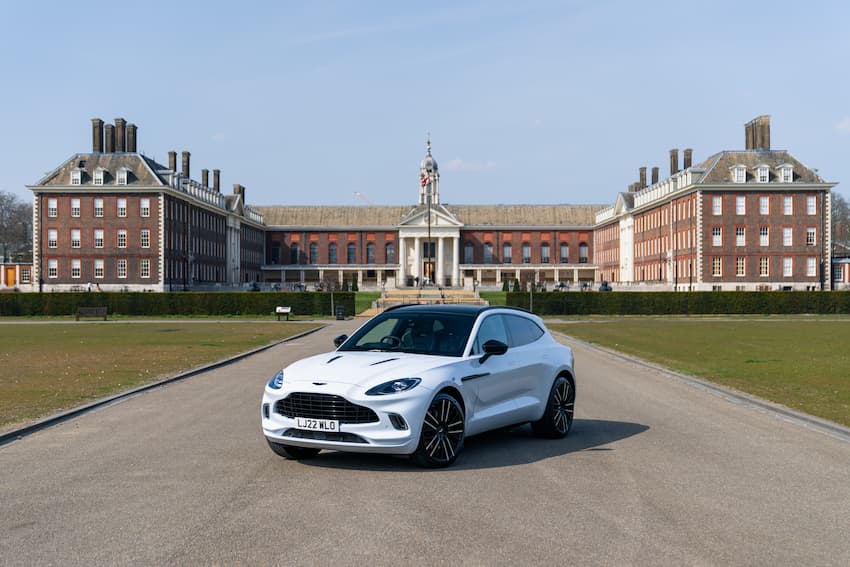 Perhaps the most bonking mad public debut was that of the spectacular new Prodrive Hunter. Unveiled by Prodrive’s chairman David Richards, the maestro who oversaw Scot Colin McRae’s World Rally Championship successes in the mid-Nineties with Subaru, the Hunter is the world’s first all-terrain hypercar.

Were it not for the bespoke 35-inch off-road tyres that have been designed to optimise grip on loose surfaces, Prodrive states that its revolutionary new model would sprint from 0-62mph in less than four seconds and have a top speed of nearly 186mph. 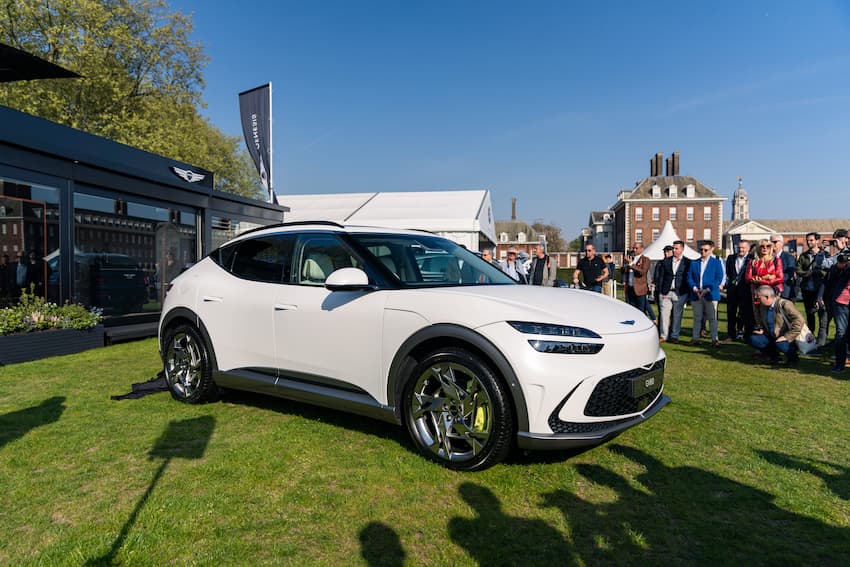 Two all-electric cars made their debuts at Salon Privé London. For Genesis, it was a European debut for its GV60, the company’s first dedicated electric platform-based vehicle. Available in three models: a rear-wheel-drive model, an all-wheel-drive, and a performance model with all-wheel-drive – each features a 77.4kWh battery which can be charged from 10% to 80% in just 18 minutes. The RWD model features a maximum driving range of around 280 miles per charge.

Making its global debut at Salon Privé, the highly anticipated production-intent version of the Electric Mustang by Charge Cars understandably grabbed a lot of attention. Just 499 examples of the electric car will be hand-built. With a range of 200 miles, the Electric Mustang uses a 64kWh modular battery and up to 50kW of rapid charging is possible. 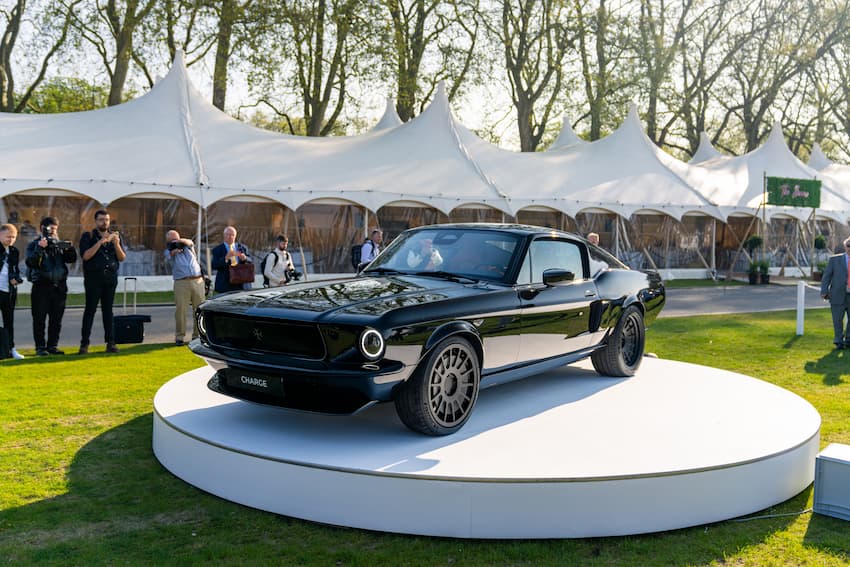 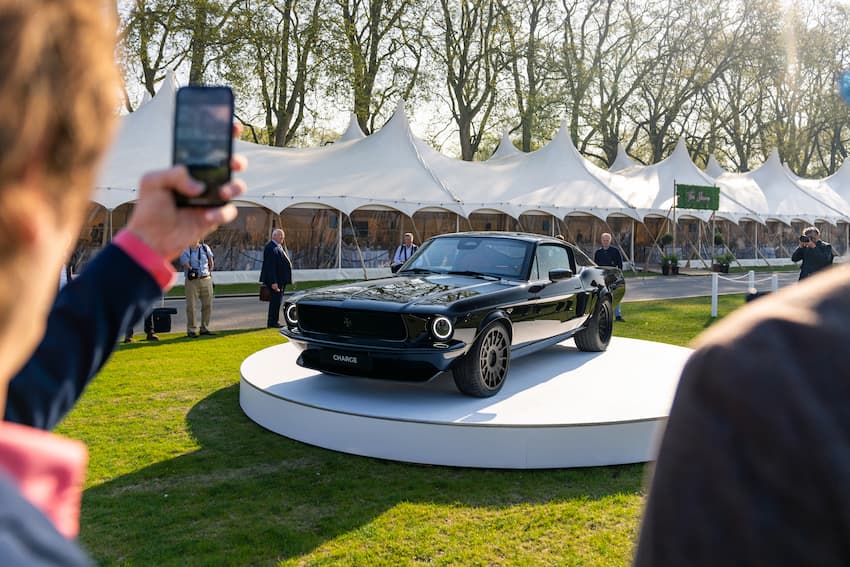 In addition to 536bhp, London-based Charge Cars states 1,500Nm of torque ensures its muscle car status remains secure, while the quad-motor setup dynamic aids include all-wheel-drive and torque vectoring. The 0-62mph sprint will be covered in under four seconds.

Another global debut saw the public unveiling of the ultra-exclusive reincarnation of the iconic Austin-Healey 100 sports car by Coventry-based Caton. Just 25 models are scheduled to be built. Each one starts at £395,000, but you’ll be pleased to know that includes the donor Austin-Healey; however, not local taxes and shipping. 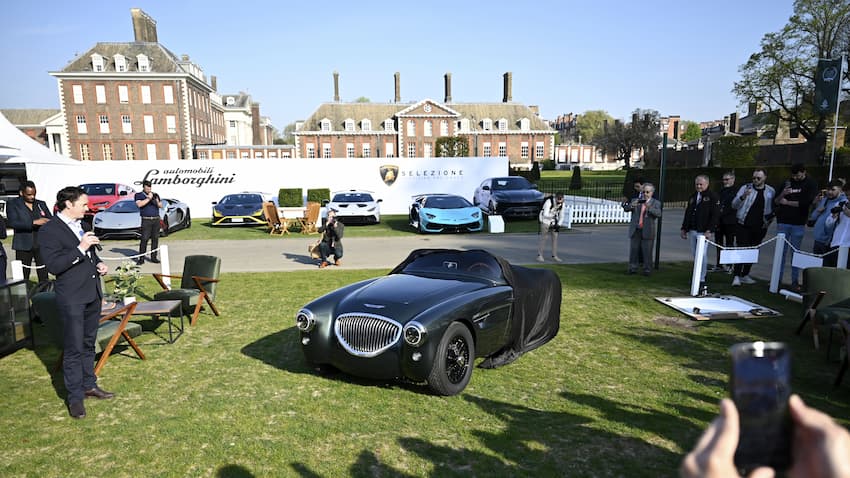 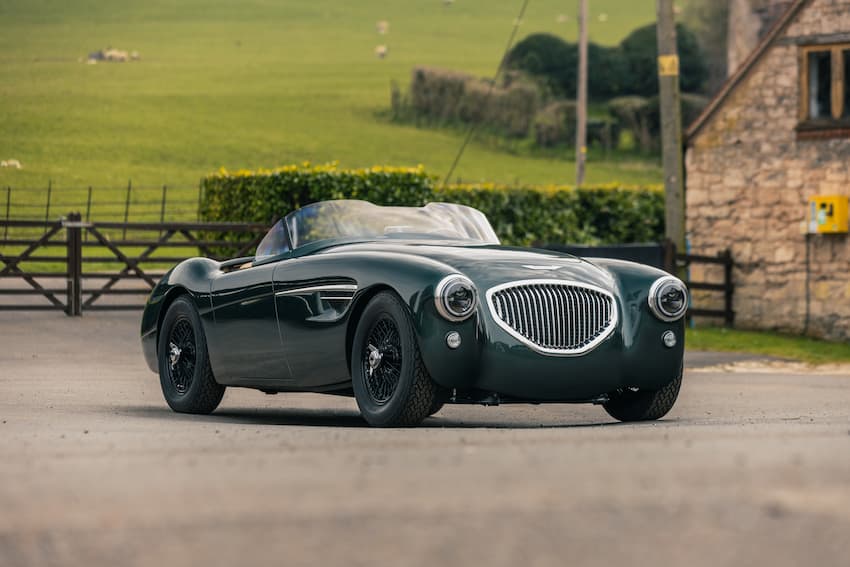 Each car gets a naturally aspirated 3.0-litre four-cylinder engine – punching out 185bhp and 195lb/ft of torque – based on an original Austin-Healey block, but heavily modified. There’s also a new five-speed manual gearbox. Thankfully, the 72-spoke classic wheels, with spinners, have been carried over from the original. They’re shod with “period correct” (but modern) Michelins. And while the dash and door panels get the leather treatment, there’s even better-quality leather — from iconic Scots company, Bridge of Weir Leather — on the seats, because that “enriches the cabin with fragrance of leather”.

Of course, as you would expect, there was much more at Salon Privé London than just cars making their debuts. There was the unique Concours de Vente, a groundbreaking concept with over 20 leading specialists and featuring 50 of the finest automotive classics, all of which were for sale during the three-day event. My personal favourite was the highly original 1936 Delahaye 135 CS brought by Fiskens.

And where there are cars, there are often watches. So, no surprise to see a selection of Roger Dubuis’ Excalibur Monobalancier timepieces. Certainly not your everyday watches. We’re talking comfortably six figure prices here. Patek Philippe watches were also on display but spread across the grounds were numerous other displays ranging from Harley-Davidsons to Bell helicopters.

Salon Privé London donated 20% of all entry ticket revenue from the event to the Disasters Emergency Committee via Work for Good.

There is little doubt the first London event was a raging success. Now I just need to wait five months before the annual autumn Salon Privé at Blenheim Palace takes place. Looking forward to it already! 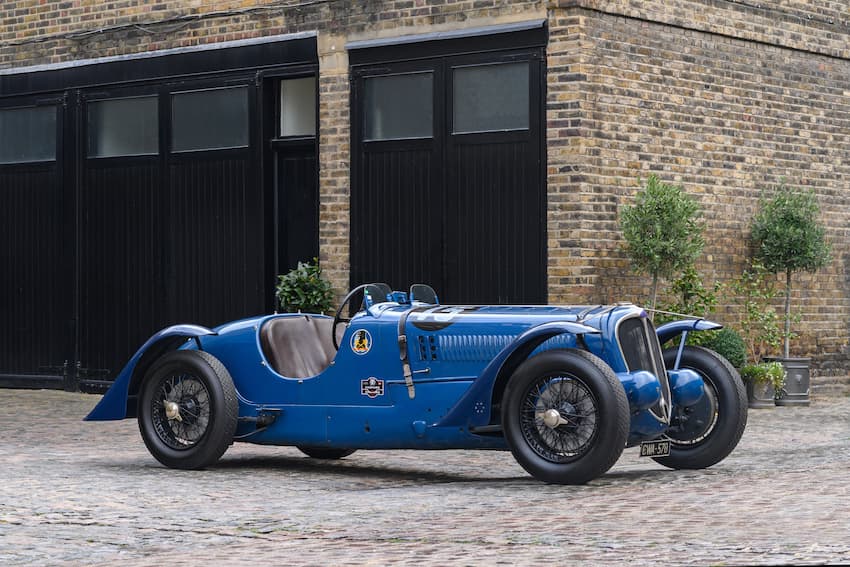