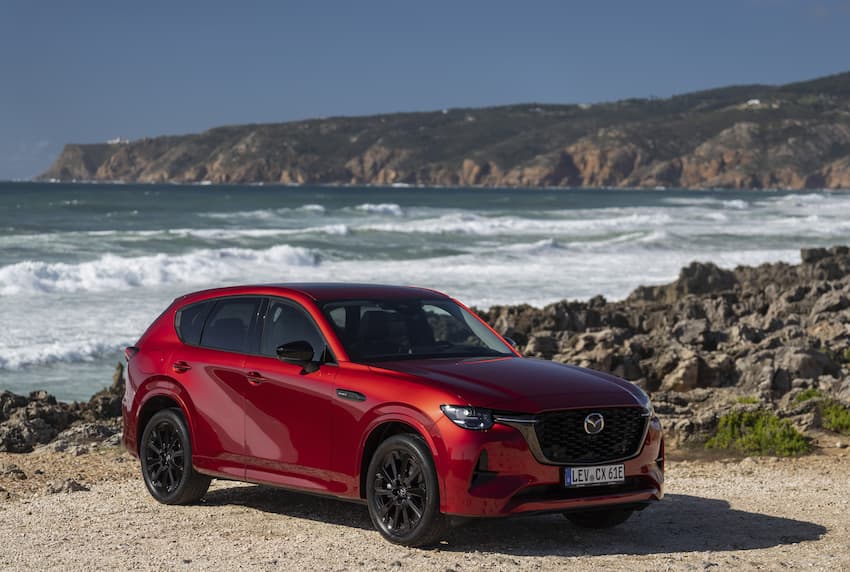 It’s a bold move on a number of levels, but by introducing its new plug-in hybrid CX-60 SUV, Mazda is making a statement about its future. That helps explain why before the PHEV hits the Arnold Clark showrooms in September, we got our hands on a pre-production model. Not only is Mazda building itself up to ultimately go head to head against the likes of Audi and BMW, but the CX-60 introduces the first of Mazda’s new generation of combustion engines.

Confused? There’s no need to be. Let me explain. There’s no getting away from the fact the all-wheel drive CX-60 is a significant car for the Japanese carmaker. Why? Because with this new model, it’s gunning for the likes of the Audi Q5 and BMW X3.

Yup. It’s accepted that Mazda, by the end of this decade, aims to be in the mix when buyers are considering models from Audi, BMW and Mercedes-Benz. The CX-60 is the first step towards achieving that goal.

The fact the newcomer is also Mazda’s next step towards electrification is another big achievement, given the CX-60 is the company’s first plug-in hybrid.

And while the CX-60 isn’t cheap, certainly when viewed in isolation — the range starts just a tad below £44,000 — when set next to comparable PHEVs from the premium brands, it actually looks keenly priced. 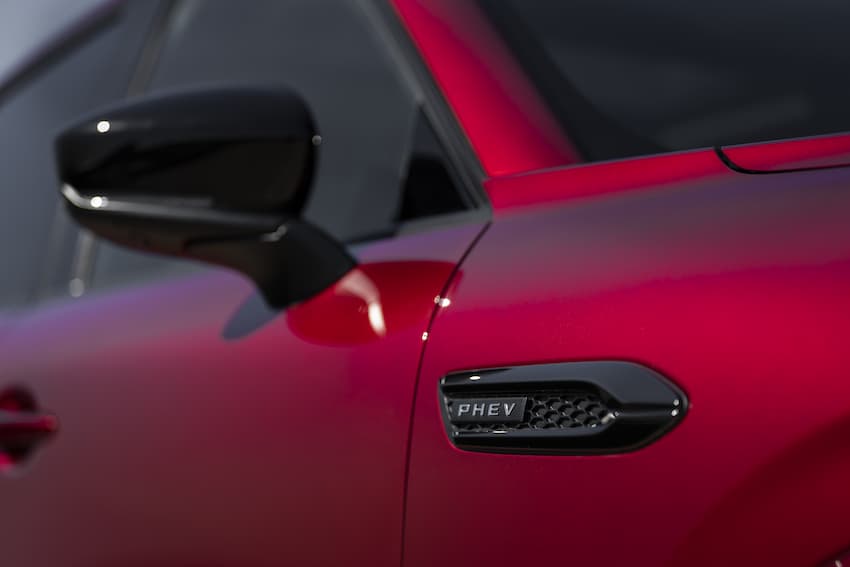 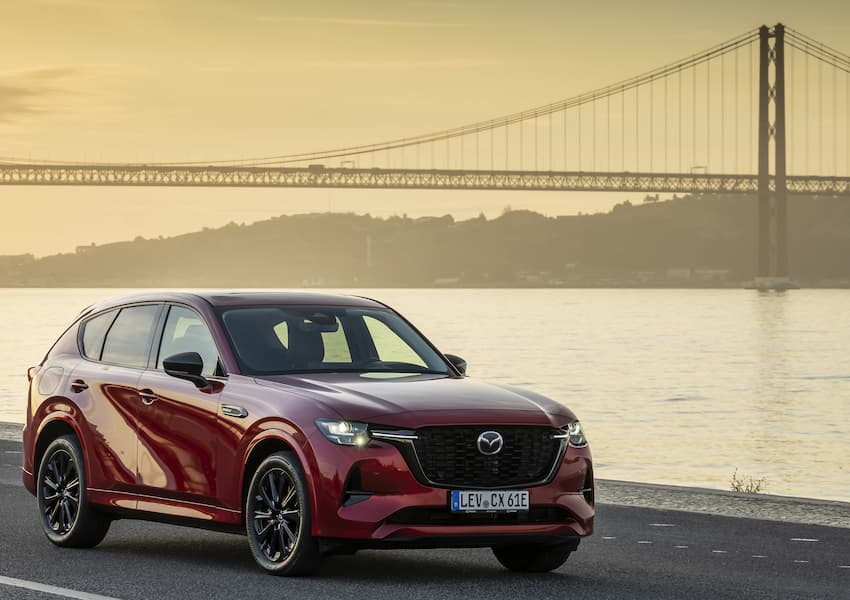 It’s not small. In fact, the CX-60 is rather imposing. Stretching 4,745mm in length, it’s 20cm longer than the big-selling CX-5. Sit the two side by side and you’ll note the rooflines are pretty much identical. The result of that is the CX-60 looks less upright. And, as you would probably expect, at 2,870mm, its wheelbase is not only significantly longer than that of the CX-5, but longer too than those of the Q5 and X3.

It’s the first model to be built on Mazda’s all-new platform, which has been cleverly and cost-effectively designed to allow it to accommodate everything from mild hybrids to pure electric vehicles, and with longitudinal engines and 4WD as well as 2WD.

Seen in profile, the CX-60 enjoys short overhangs, a long bonnet and the cab pushed as far towards the rear as possible. The result is, when sitting behind the steering wheel, the front grille seems miles away. In fact, in some ways, it looks and feels like a baby Bentayga.

And while it’s the first PHEV to be introduced to the range, in the next 12 months the CX-60 will also get a 3.3-litre, straight-six diesel with mild-hybrid variant, plus a 3.0-litre straight-six petrol MHEV. Both engines benefit from Mazda’s clever variable compression technology. 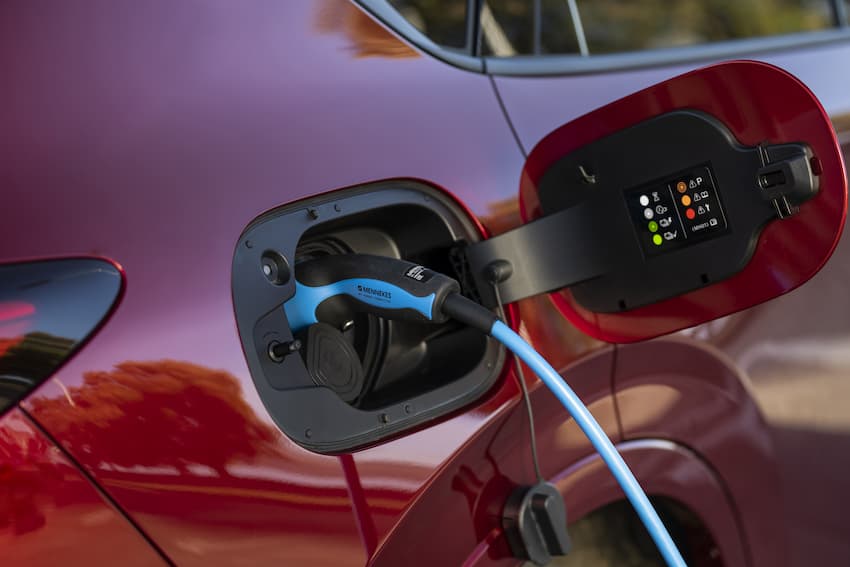 Right, what about the PHEV and range?

Under the long bonnet, there’s a 2.5-litre four-cylinder petrol engine which is mated to an electric motor to deliver a total output of 323bhp and 500Nm of torque. That makes it the most powerful production car that Mazda has ever released. Mazda claims 0-62mph in 5.8secs and a top speed of 124mph.

Those figures are all well and good, but in a car of this size and type, it’s the efficiency figures which are more important. And on paper they look attractive. The 17.8kWh lithium-ion battery housed under the floor of the CX-60 provides an all-electric range of 39 miles (though development work is continuing which could see that rise to 40 miles). Under WLTP rules, it delivers 188mpg and 33g/km of CO2 emissions.

The latter figure will help make it attractive to company car choosers who stand to benefit from its relatively low benefit-in-kind tax rate. 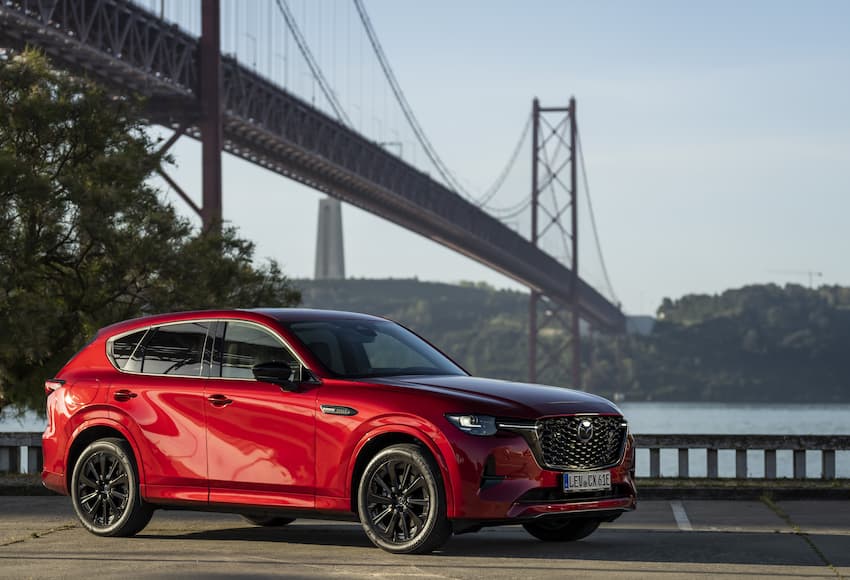 For such a large car, it’s impressive, and it’s clear it’s from the same stable that gave us the MX-5. No, of course they’re not the same, but they share the same DNA. That’s most obvious by the fact the CX-60 has the same brake-based cornering stability system as the wee sportscar.

The SUV boasts nicely weighted steering which is pinpoint accurate and, despite its chuckability, the SUV’s body remained commendably flat during quick changes of direction.

What surprised me on the twisting, narrow roads which wind round the area close to Cascais, west of Lisbon, was how keen the CX-60 was to turn in. It actually appeared to enjoy it. Sure, if you push too hard it’ll understeer, but really? Would you honestly normally drive that way in a car that weighs around two tonnes? I wouldn’t. That said, it was certainly more entertaining than a Q5.

Ok, on its 20-inch alloys the CX-60’s ride has a firm edge, but I like that. But most of the time the suspension delivered enough compliance to smooth the ride out. And while the performance figures mentioned previously confirm the PHEV is no slouch, it’s clearly at its best when the driver takes a relaxed, patient approach to the journey. In town meanwhile, the all-electric drive delivers silent driving with more than enough poke for dealing with city centre traffic.

There’s ample space in the front, though perhaps not as much kneeroom as you might expect in the rear. There’s a bit more than in the CX-5, but it’s not cavernous. It will, though, accommodate three adults across the rear and, even fitted with the optional sunroof, there was plenty of headroom for six-footers, both front and rear.

I was warned there may be some rattle and noises in the cabin during my drive of a late pre-production CX-60 Homura, but, in all honesty, there was next to nothing to complain about. In typical Mazda fashion, the fit and finish was excellent, and high-grade plastics are used in all the key areas. The gear shift has a solid feel and the rotary controller for the infotainment was easy to use, plus the digital screens were crisp and clear.

What I particularly liked was the driver personalisation system. Input your height on the screen in the centre console and the system electronically moves the seat and steering wheel to what it believes is the ideal position for the driver. Despite my cynical nature, it actually got pretty close.

Even more useful is the fact that, rather than having to press buttons to reactivate the driving positions of numerous drivers, the Mazda system stores this setting based on facial recognition; you just ‘record’ your face on a camera at the edge of the infotainment system and it then automatically scans the relevant profile the moment the driver gets into the vehicle and repositions the seat and steering wheel.

As for boot space, there’s 570 litres of stowage, which rises to 1,726 litres if you fold down the second row of seats. 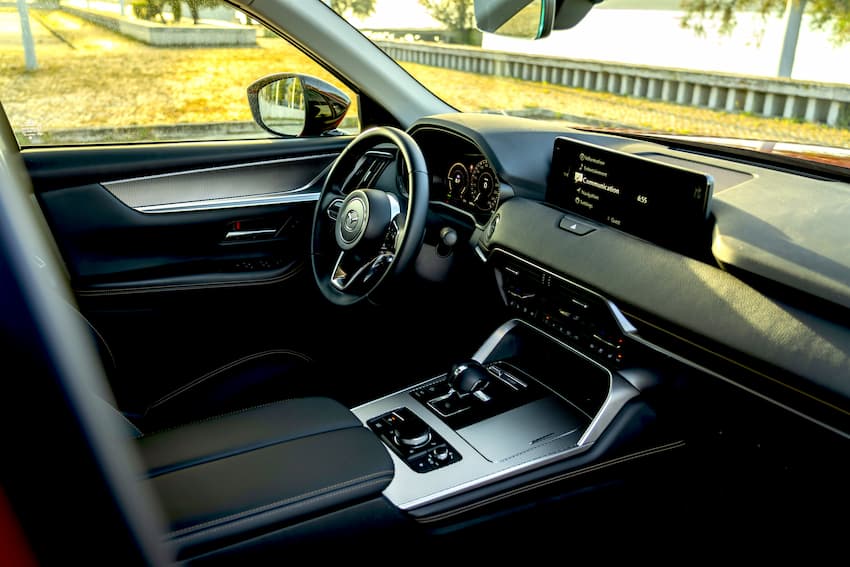 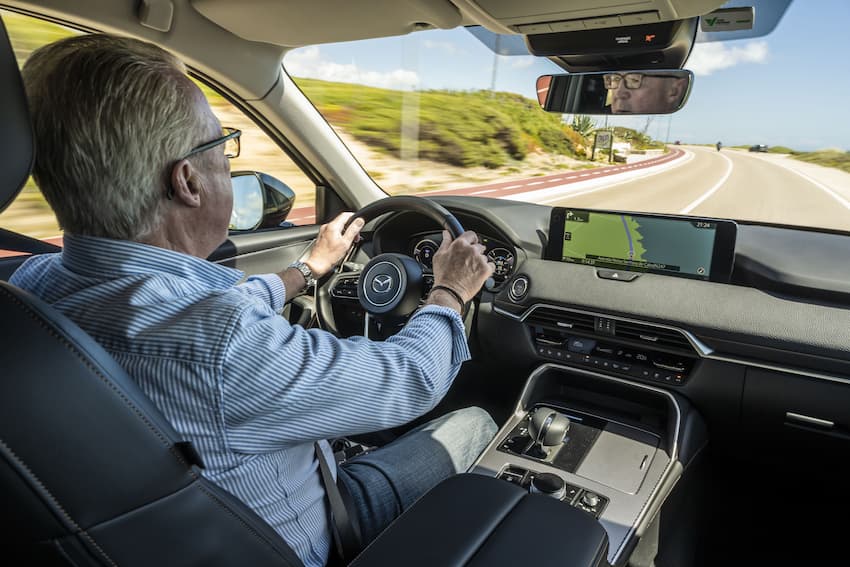 Buyers can choose from three trim levels, all of which deliver a good amount of kit as standard. The entry-level ‘Exclusive Line’ starts at just under £44,000 and includes a 12.3-inch infotainment system with the same size of digital instrument cluster, wireless Apple and Android smartphone connectivity, a head-up display, dual-zone climate control, heated front seats, front and rear parking sensors with a reversing camera, and LED headlights, plus, 18-inch metallic-grey alloys.

The range-topping Takumi, priced from £48,059, adds detailing on the dashboard and white Nappa-leather seat trim to match a white-maple wood finish on the centre console. There’s also a gloss-black front grille and body-coloured wing mirrors.

If you’re considering a plug-in hybrid, and you can wait until the 72-plate registrations in the UK in September, then you should certainly add the CX-60 to your test list. Given its power outputs, mated to the joy it delivers when it’s driven, it merits serious consideration. 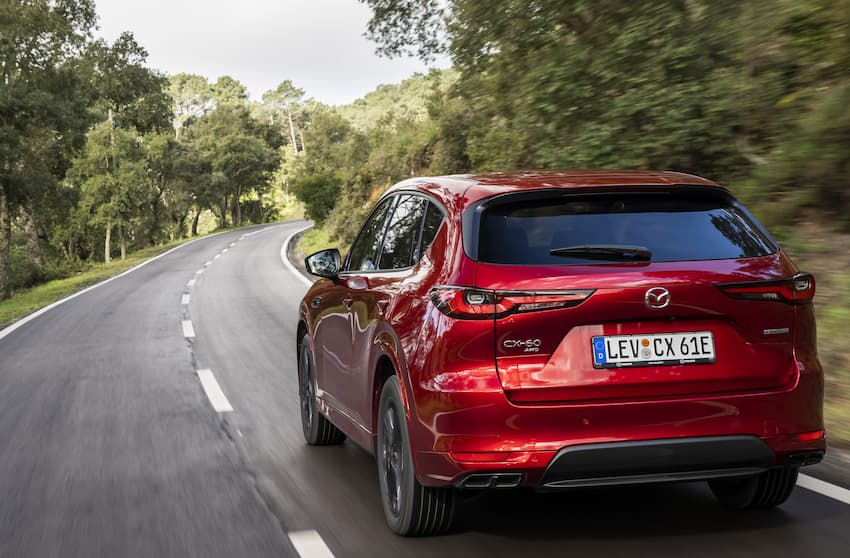 Jim is an award-winning Scottish motoring correspondent with more than 30 years' experience in the industry.