The Fiat 500e, which is available to test-drive at the Arnold Clark Innovation Centre in Glasgow, was reviewed as part of the FASTER Project. 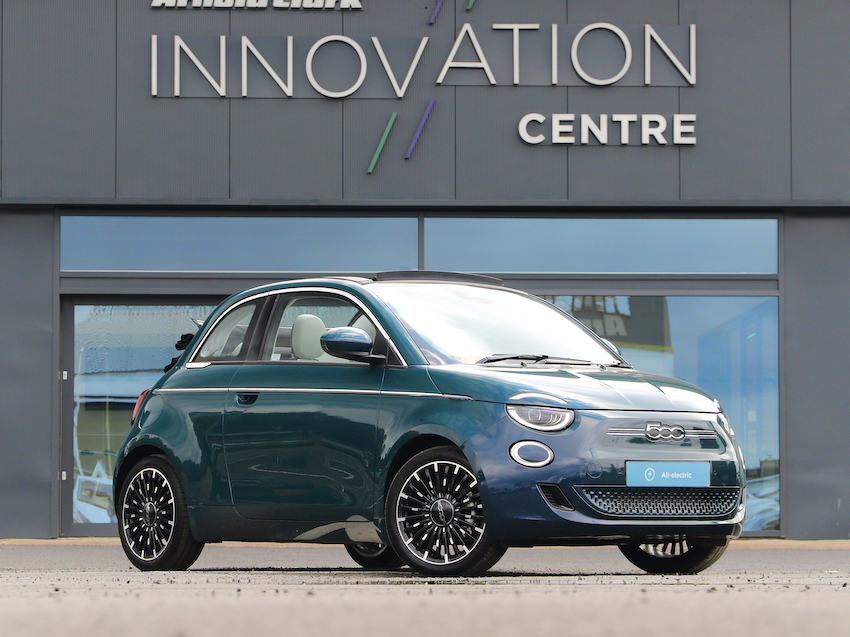 The Fiat 500e at the Glasgow Innovation Centre

The Fiat 500e, available to test-drive at the Arnold Clark Innovation Centre in Glasgow, has been put through its paces as part of a new web series.

Dr Euan McTurk of Plug Life Consulting and Ric Boullemier of Generate Media are part of the team at the FASTER Project.

The FASTER Project plans to install rapid charging stations for electric vehicles in parts of Scotland, Northern Ireland and the Republic of Ireland.

And to help the ever-expanding range of electric vehicles on the market, Euan and Ric have reviewed several of the 60 alternatively fuelled cars on display at the Glasgow Innovation Centre.

After the pair reviewed the Honda e, they decided to test the Fiat 500e, and it’s fair to say they were impressed.

With a 42kwh battery size and a roughly 140-mile range, the Fiat 500e can hit zero to 60mph in nine seconds – an impressive bit of speed for a small looking car.

And it may be designed for the city, due to its high-speed charging capability, it’s capable of so much more than urban driving.

There may be some criticism for the space, or lack of, in the back of the car but it’s all part of the charm of a Fiat 500. However, the three passenger seats, two in the back and one in the front, each has its own Isofix fitting.

Overall, this new take on an Italian classic is proving popular in the market, and you can certainly see why it's 'addictively good fun' to drive.