Glasgow Kiltwalk – A route with a view

You won’t want to miss these amazing points of interest along the Glasgow Kiltwalk route. 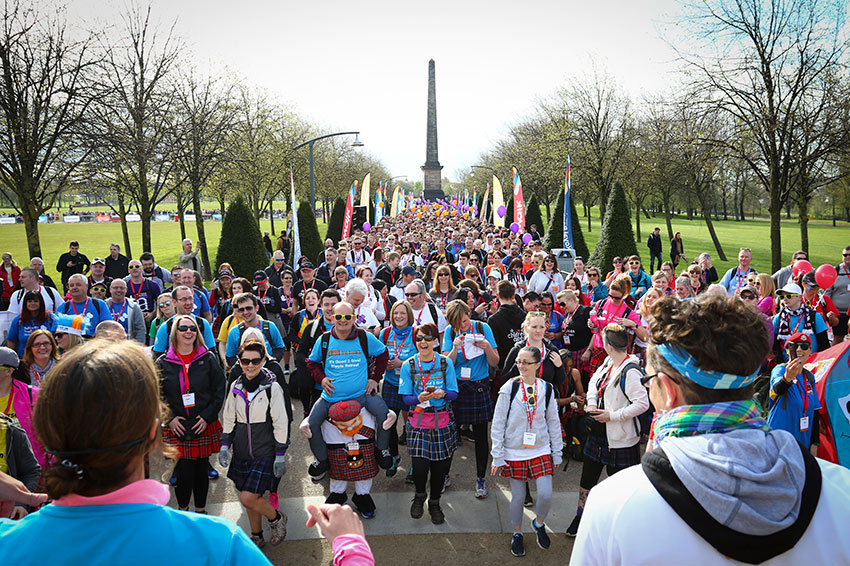 The Kiltwalkers get ready to start the Mighty Stride at Glasgow Green.

Arnold Clark is proud to support the Kiltwalk 2019 as Platinum Sponsors. The first Kiltwalk event of the year takes place on Sunday 28th April in Glasgow and our Roadies will be there, handing out goodies and offering enthusiastic support to help drive you forward for the full 23 miles.

The Kiltwalk’s Mighty Stride starts off at Glasgow Green along the Clyde and through the city centre. From Yoker, the route continues through West Dumbartonshire, ending up at the finish line on the banks of Loch Lomond at Balloch Park. 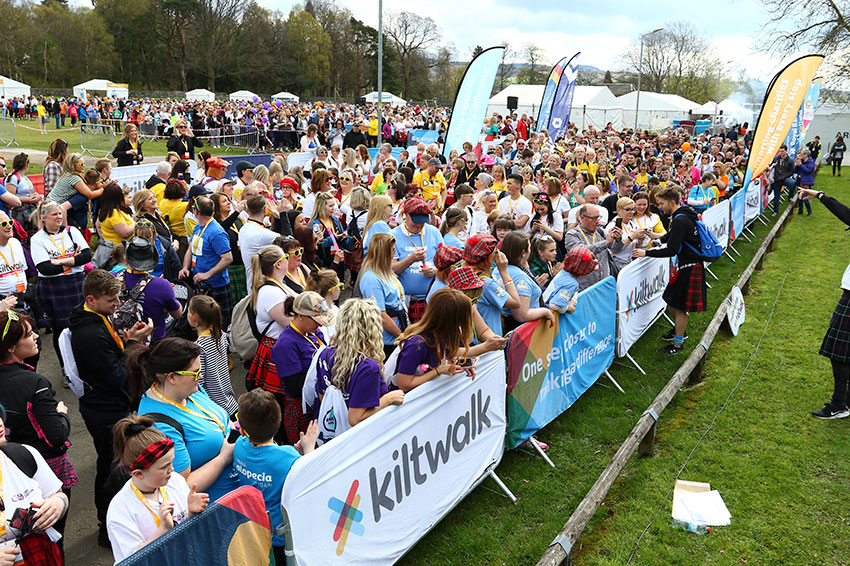 The Kiltwalk begins in the oldest park in the city. Glasgow Green is home to many monuments and structures such as the People’s Palace which opened in 1898, and is now a museum celebrating the history of Glasgow and its people from the 18th century to the present day.

The Nelson Monument was built in 1806 and was designed by architect David Hamilton, the first of many monuments built in Admiral Nelson’s honour following his victory at Trafalgar.

St Andrew’s Suspension Bridge crosses from the Southside to the Green and was opened in 1855, refurbished with timber decking and parapets in 1997 and repainted in 2005. The bridge was initially built to replace ferries that transported factory workers.

Doulton Fountain is the largest fountain constructed from ceramic. Previously located at Kelvingrove Park, the fountain was moved to Glasgow Green in the 1990s when it underwent restoration.

But beyond all the history, on the big day there will be thousands of people getting ready to ramble and raise money for their chosen charity, so expect a real party atmosphere before you reach the start line. 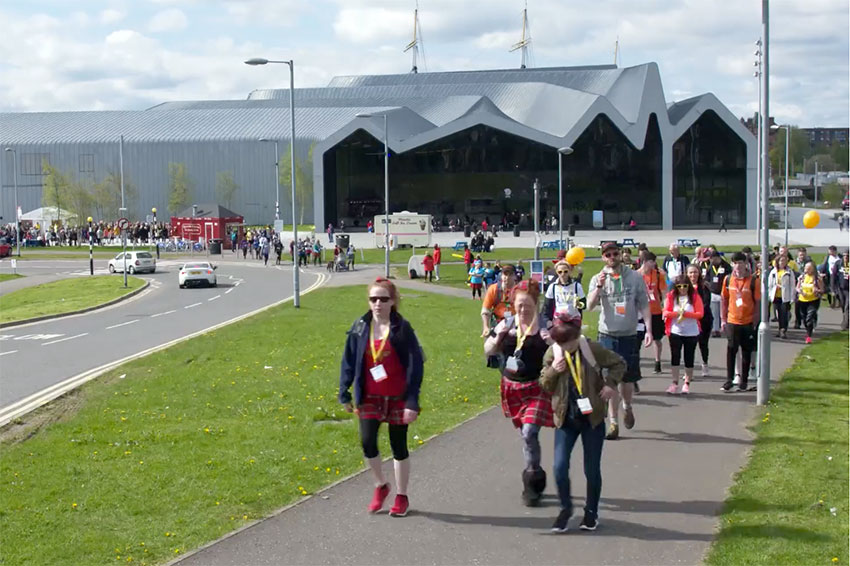 As you leave Glasgow’s town centre and move towards the West End, you’ll arrive at one of Glasgow’s most iconic buildings. The Riverside Museum is located at Pointhouse Quay and hosts Glasgow Museum of Transport, showcasing a range of historic and notable vehicles. It’s a striking piece of architecture on the Glasgow skyline and was designed by Zaha Hadid Architects to emulate a wave as tribute to Glasgow’s shipbuilding heritage. The huge glass windows at both ends were added so that the interior floods with natural light.

The exhibition has over 3,000 pieces on display, including one of the largest locomotives currently on display in Britain. And you wouldn’t want to miss out on the spectacular Arnold Clark Car Wall.

After three miles, this is the first pit stop, so appreciate the architecture, top up on water, grab a quick snack and power on. At the next pit stop in Yoker, Mighty Striders will be rewarded with a midday meal.

As you move from Glasgow into Clydebank, the Titan Crane dominates the landscape. Completed in 1907 and standing at 150 metres tall, this engineering marvel was once the central feature of the John Brown and Company shipyard. As the first electrically powered cantilever crane, it was used to construct some of the largest ships of the 20th century including the QE2. Restoration of the crane took place in 2007 to transform it into a visitor attraction.

The route follows the Forth and Clyde Canal surveyed in 1763 by civil engineer John Smeaton. Following years of decline, the canal was restored and reopened in 2001, one of the largest canal restorations in Britain.

At Queens Quay, participants in the 15-mile Big Stroll will join the walk and shortly after everyone there’s a chance to refresh at the Three Queens Square pit stop.

The route crosses the Old Dumbarton Bridge over the River Leven. Built in 1765 after a request from the Duke of Argyll, the bridge is 360 feet long and comprises five stone arches. Dumbarton Castle, sitting on Dumbarton Rock, is visible across the point where the River Leven meets the River Clyde.

For 2019, The Wee Wander has a brand-new starting location at Levengrove Park in Dumbarton. And that means there’s only six miles to the finish line.

The final pit stop of the event can be found on the grounds of Vale of Leven FC, so stay hydrated – the finishing line is in sight. 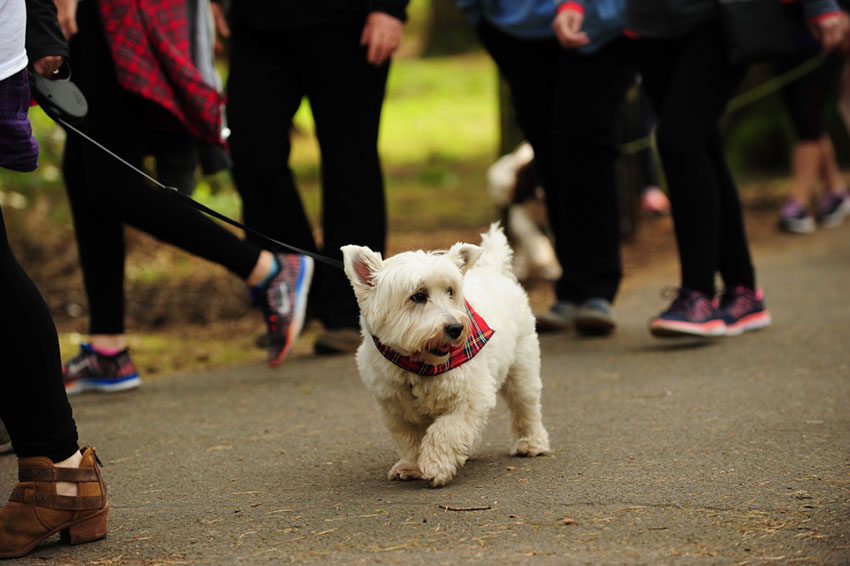 On the River Leven, Alexandria is a small town south of Loch Lomond. As you march to the finish line, look out for Christie Park, the fountain in the town centre and the former Argyll Motors Ltd. building with its impressive dome, now known as Lomond Galleries. 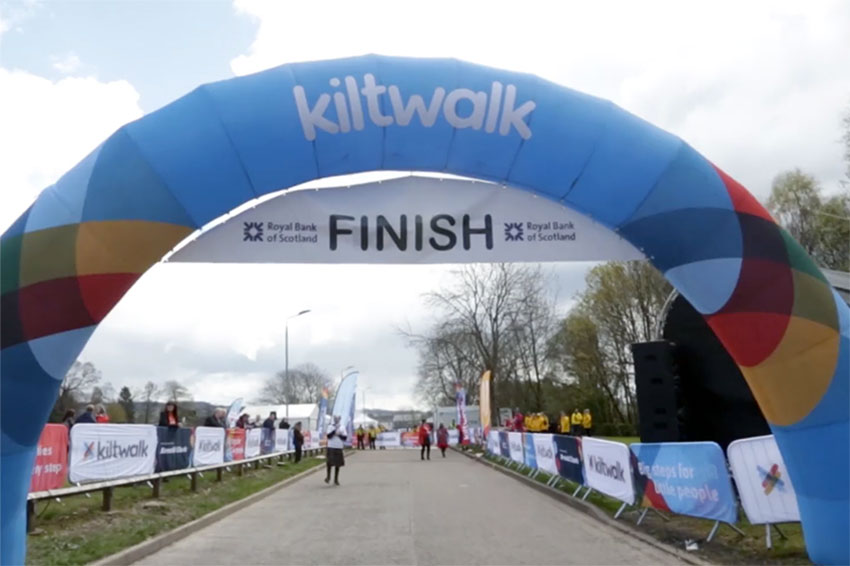 Balloch is often referred to as the gateway of Loch Lomond and the Trossachs National Park. During the last leg of the Kiltwalk, you’ll be able to see the Kilpatrick Hills, the River Leven and of course Loch Lomond.

Arriving in Moss O’Balloch Park after almost 23 miles, you’ll find the Kiltwalk Village. Once there, you can enjoy a hot meal, live entertainment and even a massage to help you recover. You can stay into the evening, cheering others over the finish line and share the sense of achievement with your fellow Kiltwalkers.