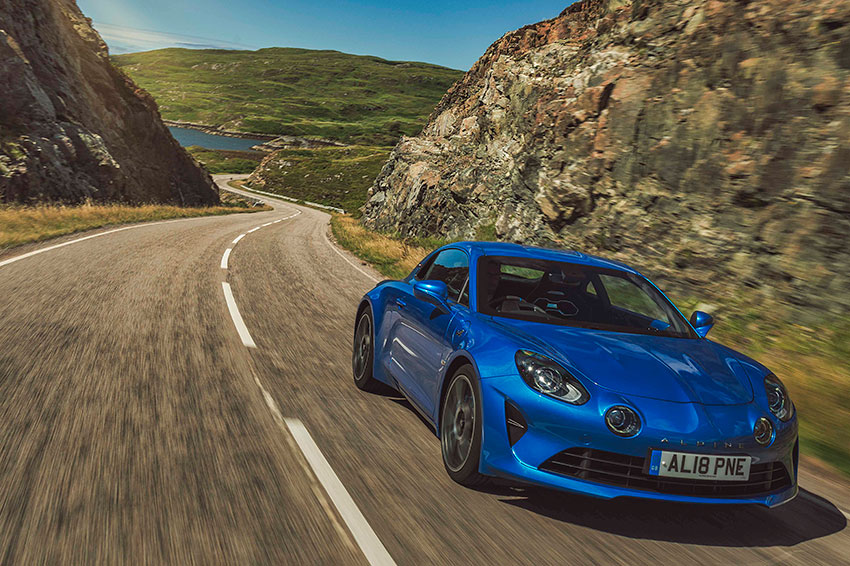 Think of the best, most successful two-seater sportscars and the likelihood is your mind will immediately think of German models, such as the Porsche 718 Cayman and Audi TT. But whisper it. There’s a little French number that is successfully taking the fight to the Teutonic duo: the Alpine A110.

An Alpine? Isn’t that more about Swiss chalets and forests? Well…?

Ok, here’s a wee bit of background. Founded by Jean Rédélé in 1955, the Frenchman, driving his Renault 4 CV, scored class wins on the Mille Miglia and Critérium des Alpes. And yes, it’s the latter that inspired Jean to name his car company, Alpine.

His philosophy was simple: build a car which, though not necessarily the most powerful, could beat the rest by focusing on lightness and agility. He achieved that with his successful and iconic A110, which was produced between 1962 and 1971.

Now, decades later, Alpine is back with a bang. The Renault-owned brand has returned with a modern-generation A110: a model which is the realisation of how the car would look and drive today if it had evolved through continual production.

Want to know more? Read our history of Alpine.

But have they done a good job? 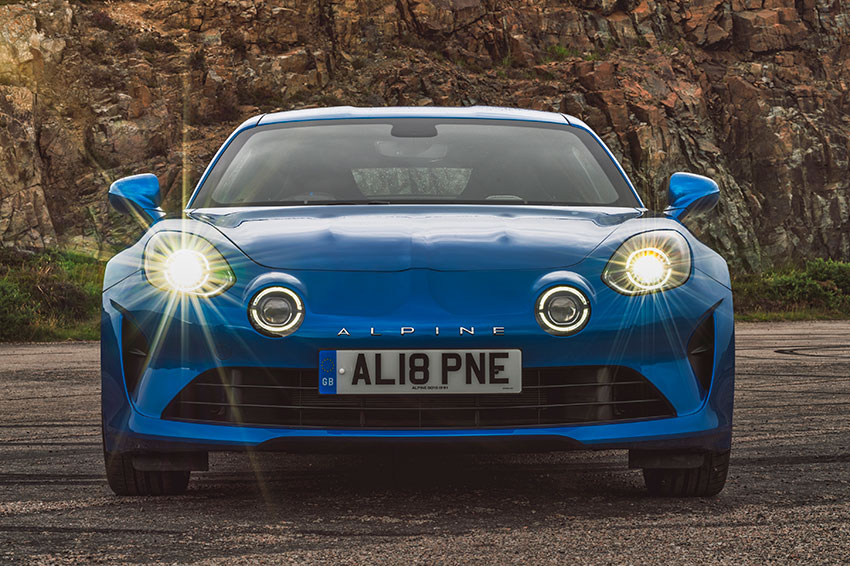 And boy have the designers and engineers at RenaultSport in Dieppe got it right. The Alpine A110 is a sweet, sweet little car. And I use the word ‘little’ advisedly. It’s small. It’s less than 4.2 metres long and 1.8 metres wide. But it’s also light. The flagship version tips the scales at 1103kg, including fluids. That’s around 25%, which equates to 300kg — similar to six average-weight adults — lighter than the Porsche or Audi.

And that lightness is a major boon when it comes to performance. Sure the A11 ‘only’ has a 1.8-litre turbocharged four cylinder engine, tucked away behind the seats. It’s the same unit fitted in the latest Renaultsport Mégane. In the Alpine it develops 249bhp and 236lb/ft of torque at 2000rpm, with the power sent to the rear wheels via a seven-speed Getrag double clutch gearbox.

The combination delivers the benchmark 0-62mph time of 4.5secs. That’s quick, in anyone’s book, but it’s the way the Alpine does it that really impresses. It seems to glide forward and never seems to have to work hard to deliver its true pace. It’s worth mentioning here too that Alpine quotes 46.3mpg and under 138g/km of CO2.

This is one of those cars that enjoys being driven; and in return rewards the drivers. The dual-clutch transmission (DCT) is a dream. Silky smooth doesn’t pay it tribute enough. Start the Alpine up and it purrs in ‘Normal’ mode. This is the A110’s most eco-sensitive setting, and not surprisingly delivers early upshifts.

So, what was all the fuss about? 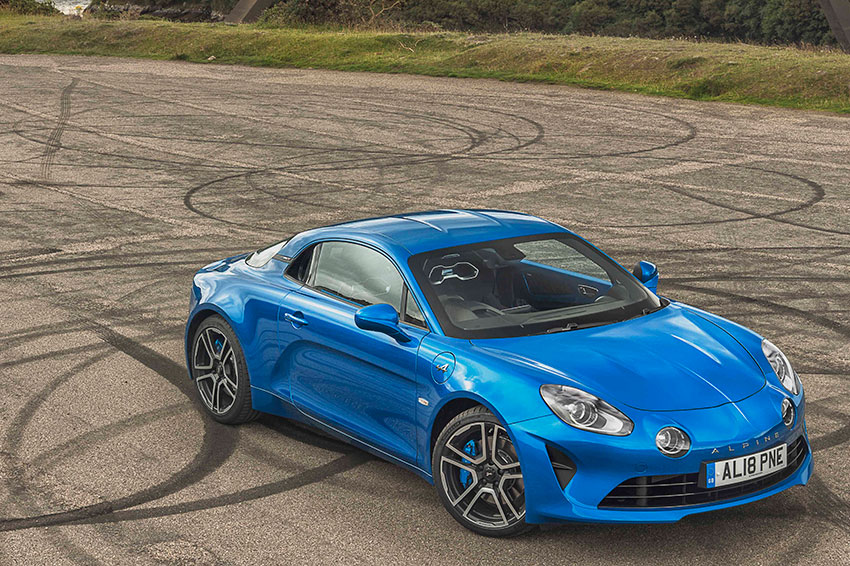 The key to unlocking the Alpine’s true joys is switching to the ’Sport’ or ‘Track’ settings. Now the A110 comes alive. Don’t get me wrong. ‘Normal’ mode is fine. But ‘Sport’? Wow.

This is when you begin to realise and experience what all the fuss and headlines have been about. It becomes a car like no other. For those of a certain age, or who have more recently become acquainted with older models, it will have you reflecting on the halcyon delights of a Lotus, such is the bewitching pleasure of the A110’s ride quality and control.

For a sportscar, the Alpine is never aggressive. Nor is it intimidating, harsh or hard. It somehow flows, always remaining fluid and composed. It is like stepping back into another generation of transport. And yet, it is cutting edge.

The suspension is aluminium double wishbones all round. The Alpine sits on an all-new, bonded and riveted aluminium platform. The clips for the ABS sensor cables are made from aluminium, all in an effort to shave grammes from the car’s weight. Even the Sabelt seats weigh 13kg each – that’s half those of the outgoing Mégane RS.

Of course, even sitting on its Michelin Pilot Sport 4 tyres, the car’s lightness does mean it can get a little jiggled over lumps and bumps in the road, but this is a car you need to drive. Plus, the near languid suspension always allows the driver time to respond… and smile.

But what about the inside? 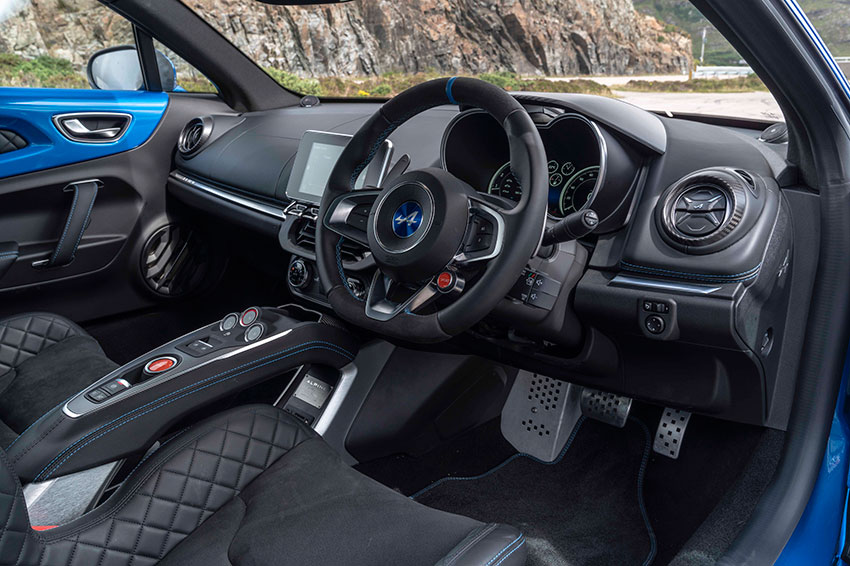 Inside the cabin, which comes complete with an infotainment system, there’s plenty of space, despite its cute external dimensions, and the design is definitely attractive. Remember, the Alpine is strictly a two-seater. As a result, it’s not the most practical car on the road; nor would you expect it to be.

That said, with its two boots, front and rear — 100-litres and 96-litres respectively — there’s enough stowage for a couple of decent overnight bags, so the Alpine will comfortably do overnight stays. Just don’t expect to be able to take the golf clubs!

As for the model range? The high-spec Première Edition which greeted the Alpine’s return in 2017 and cost £51,805, sold out in five days.

Today though, Arnold Clark — Alpine’s only representative in Scotland — can offer you the Pure model, and the Legende. The Pure, priced at £46,905, sits on 17-inch alloys. The slightly more comfort-focused Legende, at £50,805, benefits from fully adjustable leather seats. 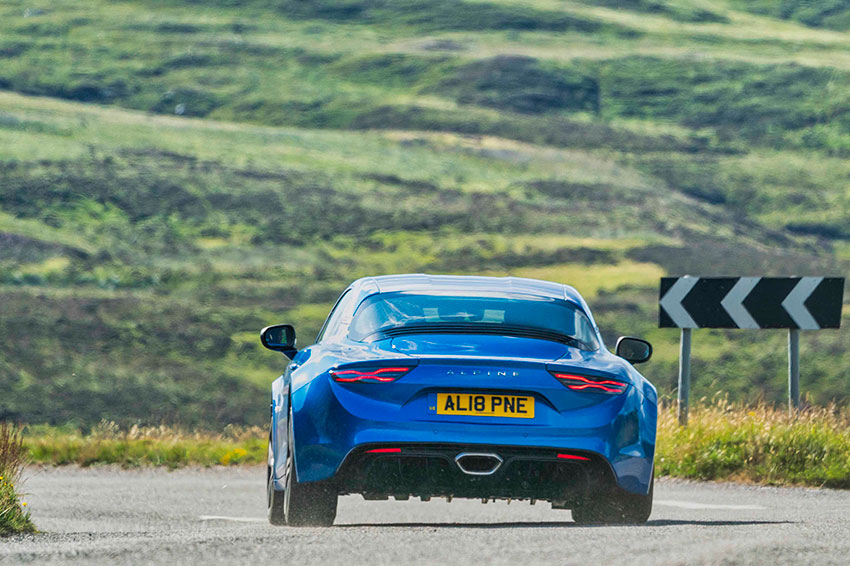 There’s no denying the Alpine is different. Certainly in terms of its established competition. But it’s also terrific. No other car on the road combines the A110’s combination of light weight, precision and measured power.

In many ways it’s THE sportscar for the modern generation. Its non-threatening, non-aggressive looks and subtle power, mated to its poise, agility and dynamism ensure the Alpine punches well above its weight and delivers. It’s a knockout.

Offer subject to status, terms and conditions. Click here for details including our panel of lenders.
Find out more