Tim Barnes-Clay tests the third-generation model of the seven-seater SUV. 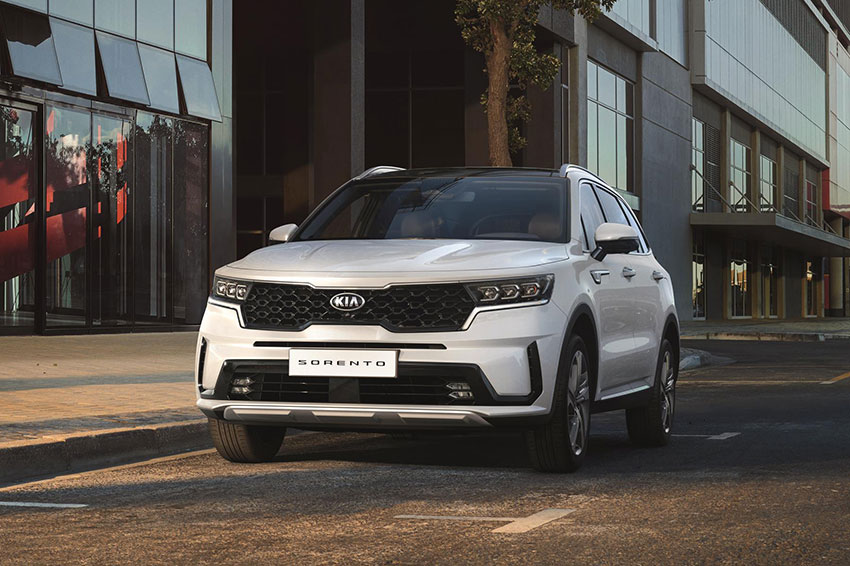 Kia is a marque that has been getting stronger and stronger, particularly over the last decade or so. Once a make almost snubbed on the roads of the UK, the South Korean vehicle manufacturer is now a significant competitor in the SUV, family car and electric vehicle market.

The Sorento has been in the automotive arena for a good while. Indeed, it is a pillar of Kia’s international line-up – and over three million models have been sold around the world since it was launched way back in 2002. Now, as you might expect, it’s time for a shake-up to keep the seven-seater flagship relevant and in our minds. So, is the latest incarnation of the vehicle any good?

The last model was refreshed at the end of 2017, but the world has moved on in that short time. What has Kia done to pique our interest in the Sorento? Well, the fourth-generation SUV has been engineered and designed to take on most things life can chuck at it. Indeed, it’s the first car to be based on the Kia’s new mid-size SUV platform. Therefore, straight away the new Sorento boosts standards in its segment for practicality, offering room on a level pegging with bigger vehicles. The new model also heralds the first-time implementation of hybrid power in the Sorento ensemble.

But first, we should look at the concept of ‘refined boldness’. This enthused Kia’s designers, who wanted to uphold the full-bodied, strong-looking aesthetic of earlier versions of the Sorento while applying a higher degree of sophistication and stylishness. So, now more chic than ever, the Sorento’s redefined look includes continual surfaces and sharper lines. This makes it markedly more chiselled than its curvier predecessor. With more up-to-date geometric details and sleek, drawn-out proportions, the result is a more assured, more mature and more attractive design than ever.

The confident ‘face’ of the Sorento is different, too, with a new interpretation of Kia’s trademark tiger-nose grille. Broader and less restrained, it wraps around the integrated headlights on each side. The lamps themselves feature an innovative tiger’s eye LED daytime running light, adding further focus to the design by representing the feline contours around a big cat’s eyes. 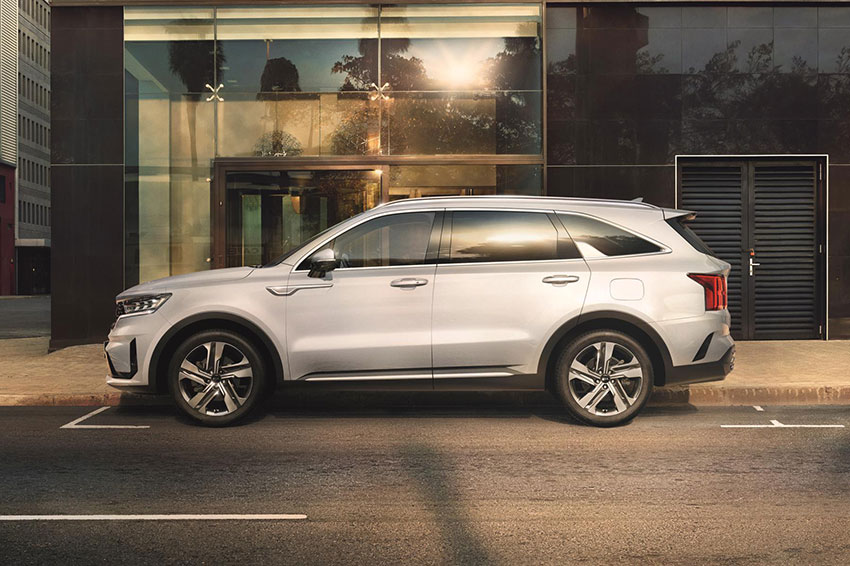 In silhouette, the proportions of the all-new Sorento are finely adapted to make it look longer, with shorter rear and front overhangs and an extended wheelbase. Its changed dimensions also cover the length of the bonnet, pulling the A-pillar back from the front axle for a ‘cab-rearward’ appearance. The trailing edge of the bonnet folds around the SUV’s wings and turns into a solitary, solid character line, which runs along the side of the all-new Sorento and courses into the up-to-the-minute vertical taillights.

Inside, space is the all-new Kia Sorento’s big selling point, but that’s no surprise, because if a seven-seater can’t be practical, what on earth is the point of it? There's plenty of space for the driver and the front-seat passenger – and impressive head and legroom for four adults in the second row of seats. Indeed, this row has been considerably improved, thanks to better packaging. What’s more, there’s an acceptable amount of room for any child passengers that would go in the couple of seats that make up the third tier. And, as typical with seven-seat SUVs, you can fold down the third row to create substantial boot space.

Interior features include a Mercedes-Benz-esque panel that connects a bigger infotainment touchscreen to a digital instrument display. Another panel, hosting climate control, is bordered by air vents. On the technical front, there are a few new kids on the block for Kia. These include a self-parking function accessed through the key fob, enhanced cruise control, a blind-spot system that uses door mirror-mounted cameras to feed images of what’s beside the Sorento onto the dash, and automatic braking if the SUV is about to collide with an obstacle while parking. 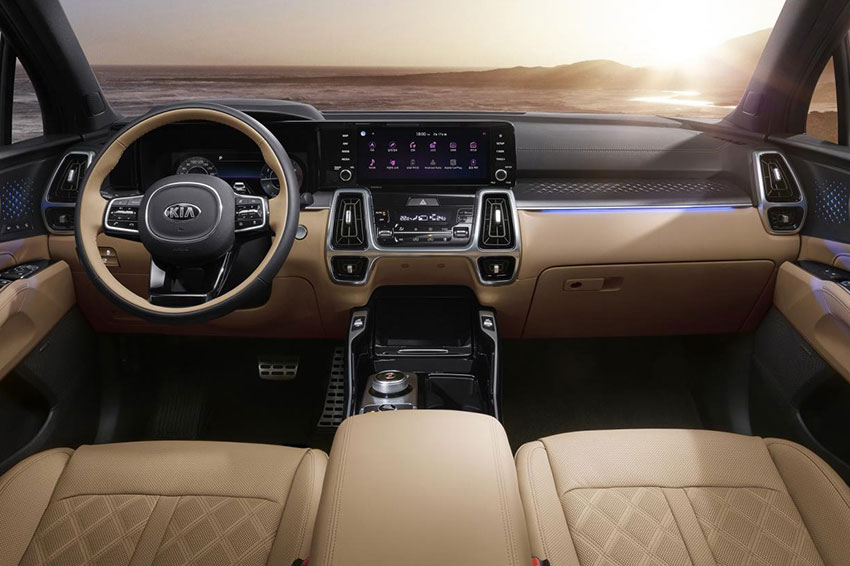 When the 2020 Sorento launches in Britain towards the end of the year, it will house a 2.2-litre diesel engine producing 199bhp. But, perhaps more interestingly, a far greener hybrid will be offered. This will be powered by a 1.6-litre petrol unit hooked up to an electric motor and a 1.5kWh battery pack. The combined output will be 227bhp. An even more environmentally friendly 261bhp plug-in hybrid will come soon after with an 89bhp motor and a 16.6kWh battery pack.

The all-new SUV will be sold with either front or four-wheel drive. However, if you go for the plug-in hybrid, this comes with 4x4 only. I should highlight that Kia's all-wheel-drive system is extremely practical, giving you that extra toehold and security on the roads. But don't go thinking the all-new Sorento will scale any mountains - it's manufactured principally for the tarmac. No complaints there from me, though.

In terms of what the all-new Sorento is like to drive, Kia says that changes under the metal equal many advantages on the road. These improvements include better handling and enriched rolling refinement. This will all be very welcome, as previous generations of the Sorento have always been pliant and comfortable in a straight line, but rather lurchy in corners. That was never a surprise to anyone, though – after all, the model has always been a heavy vehicle.

What won’t change is what the car has always been very good at – cruising around with a bunch of people in it. The Sorento will, no doubt, also continue to be just about compact enough to mosey around town in. And, given Britain’s traffic, moseying is the only thing you can sometimes do.

The Sorento sits at the core of Kia’s bolstered global SUV range, which also comprises the Seltos, Stonic, Sportage, and Telluride. This all-new model is the result of a collective effort between all three studios within Kia's global design set-up, in South Korea, Europe and America. 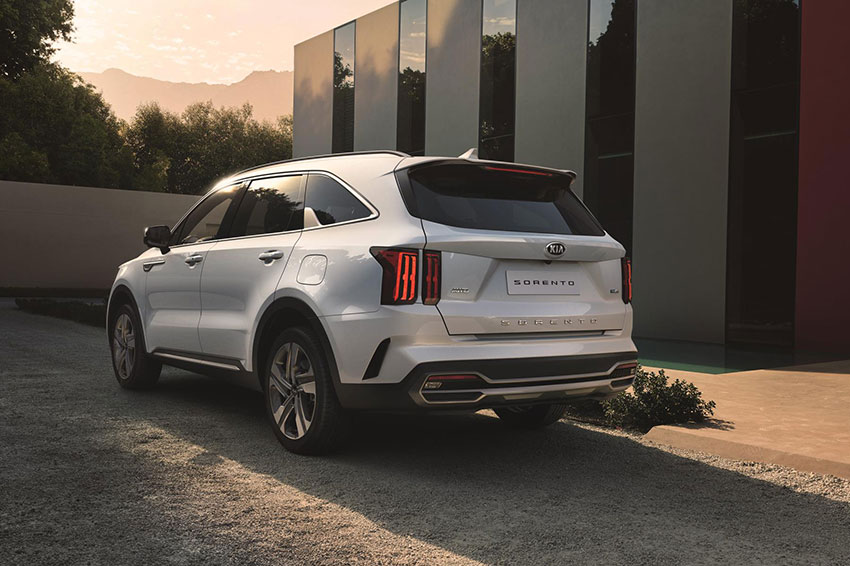