The latest version of Volkswagen’s hottest hatch – the Golf R – is coming soon. 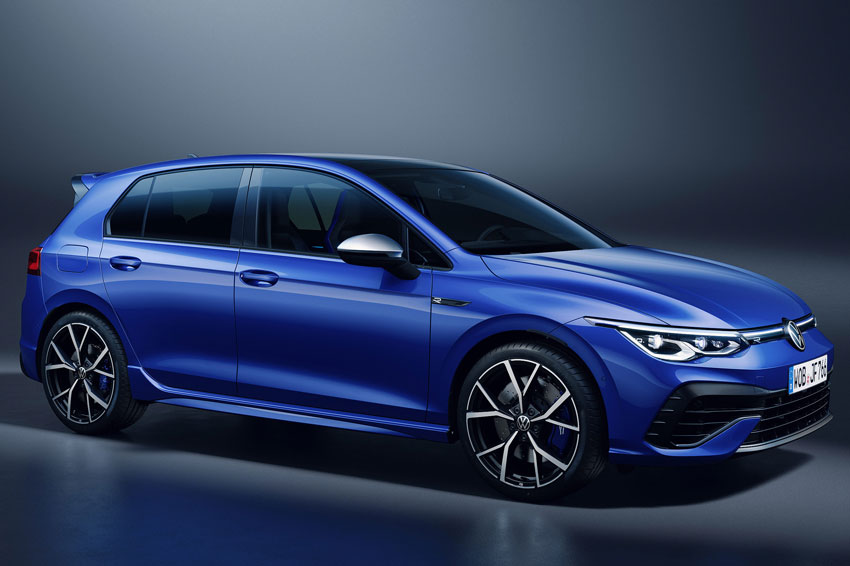 Volkswagen has lifted the wraps from its ‘halo’ MkVIII Golf: the four-wheel drive, 316bhp Golf R. It completes the current GT performance line-up, alongside the latest GTI, GTD and GTE models. Arriving in showrooms later this month, and likely to cost around £37,000, the Golf R — which now also has a new Drift mode — will go head-to-head with the likes of the Honda Civic Type R, Mercedes-AMG A 35 and BMW M135i.

It looks similar to a ‘standard’ Golf

It does; and that’s no bad thing. Cosmetically there are subtle differences over a standard MkVIII Golf. In addition to a set of fairly subdued “R” badges — including one centrally on the tailgate — there’s a slightly more aggressive body kit with deeper side skirts, plus 18-inch alloys.

The eagle-eyed amongst you will have identified the biggest tell-tale that this is a Golf R: the quad-exit exhaust and subtle new rear diffuser.

However, if that’s not enough and you want to shout, ‘look, I’ve got a new Golf R’, you can tick the options box for the new two-piece tailgate spoiler. Oh, and you can also get bigger 19-inch alloys, plus a louder (and lighter) Akrapovic exhaust system. 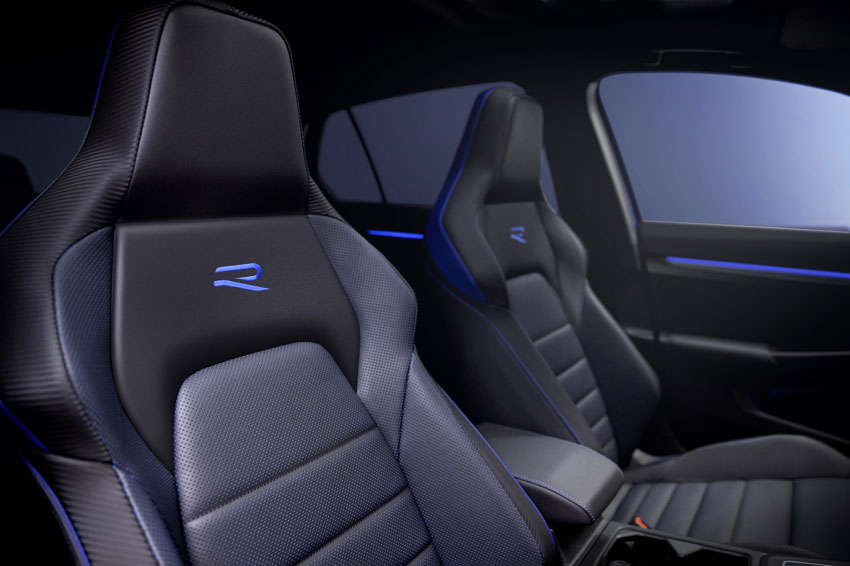 There are further changes and improvements to the R’s cabin. Most noticeable is the pair of heavily-bolstered sports seats, resplendent with their trademark ‘R brand’ blue stitching; a new sports steering wheel, complete with a set of larger paddle shifters; unique door cards and stainless-steel pedals. Dotted around the seats and floor mats are a number of discreet ‘R’ logos, plus there’s a customisable ambient lighting system.

The fascia is dominated by the same 10-inch infotainment system and digital instrument cluster as the standard MkVIII Golf. Cleverly though, the system’s displays have all been reconfigured with unique blue-faced graphics. Nice touch. 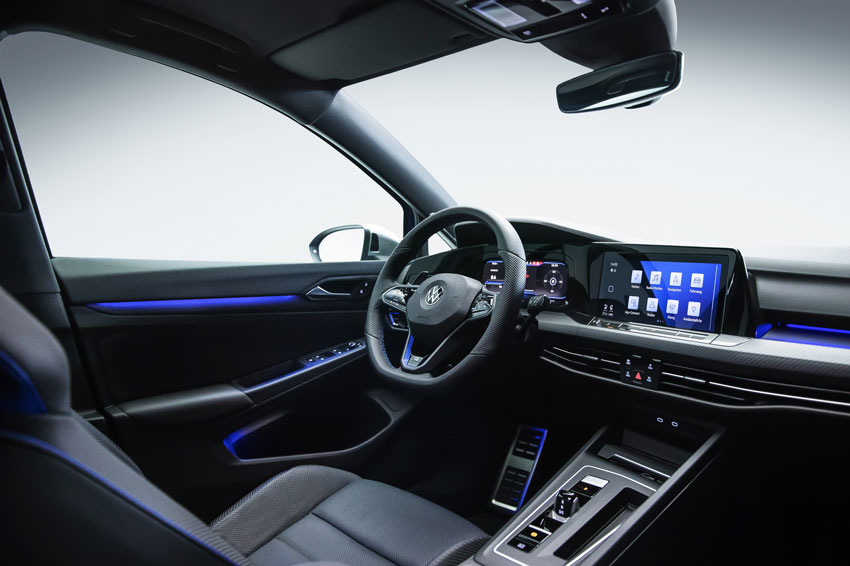 There’s also a choice of two different dashboard designs, centred around either a circular or horizontal rev-counter. And when being driven in ‘manual’ mode, a visible shift prompter is displayed on the dashboard to help the driver optimise their gearchanges.

Power comes from a turbocharged 2.0-litre four-cylinder petrol engine, as was the case with its predecessor. But the new model’s powerplant has been retuned to deliver an extra 20bhp and 20Nm of torque. That means a total of 316bhp and 420Nm of torque.

What does that do to performance? Volkswagen quotes 0-62mph in 4.7-seconds — an improvement of 0.2sec over its predecessor — and an electronically limited top speed of 155mph. However, by speccing the optional R-Performance pack, buyers can have the limiter raised to 168mph. Power is sent to all four wheels via a seven-speed dual clutch gearbox.

Yup. As you would expect, the latest Golf R comes packed with clever new technology, all aimed at improving on-track performance. Top of the tech tree is a new two-stage electronic stability programme, which combines a sophisticated traction control system and a new torque vectoring system.

It’s the same system which has already been fitted to the hot Arteon and Tiguan. Without getting too techie, for the first-time drive is distributed variably between the two rear wheels, rather than just between the front and rear axle.

Using a pair of electronically-operated multi-disc clutches, Volkswagen says the system can balance output across the rear axle from 0-100% within milliseconds.

You mentioned a Drift mode

I did. Drivers will be able to choose from six different driving modes: in addition to the usual Comfort, Sport, Race and Individual, the system also includes a new Special profile. Volkswagen says this was configured specifically for the Nürburgring.

But what’s most interesting is the sixth and final mode; Drift. If you want to impress the neighbours by drifting round the corner of your normally quiet cul de sac, flick into Drift mode and the system will ease off the traction control and send most of the engine’s power to the rear axle. The result? You can perform powerslides. 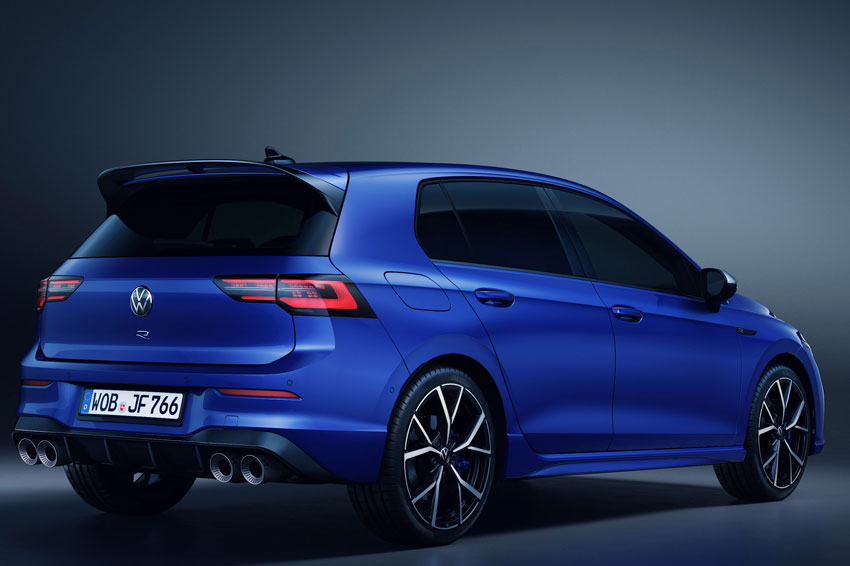 The new Golf R also boasts a number of beefy mechanical upgrades, designed to supplement the agility-enhancing benefits delivered by the electrical and software improvements.

In addition to 18-inch disc brakes on the front axle, which replace the old car’s 17-inch versions, the latest model gets wider alloy wheels, a new progressive power steering system and stiffer adaptive dampers. It also sits 20mm closer to the ground than the standard hatchback, lowering the centre of gravity and improving handling.

The UK specifics have yet to be confirmed, but with the extra technology fitted, it’s fair to expect prices to start around £37,000. The Golf R is scheduled to arrive in showrooms later this month, with first deliveries expected in early 2021.

What about the rest of the GT-badged Golfs?

There are three other GT-badged performance models in the latest MkVIII Golf range: GTD, GTE and, of course, the GTI. 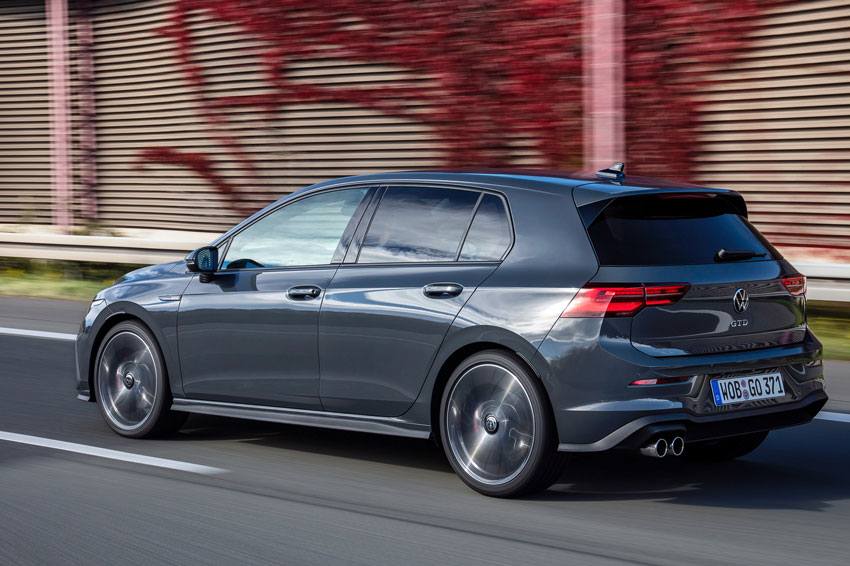 Available to order now, the Golf GTD is priced from £32,790. It’s powered by a 2.0-litre TDI engine delivering 197bhp and capable of covering 0-62mph in 7.1 seconds and carrying on to a top speed of 152mph. It’s available only as a seven-speed dual-clutch automatic gearbox. Volkswagen claims WLTP fuel economy of 51.4-54.3mpg —meaning a range of up to 600 miles on a full tank — with CO2 emissions 137g/km. 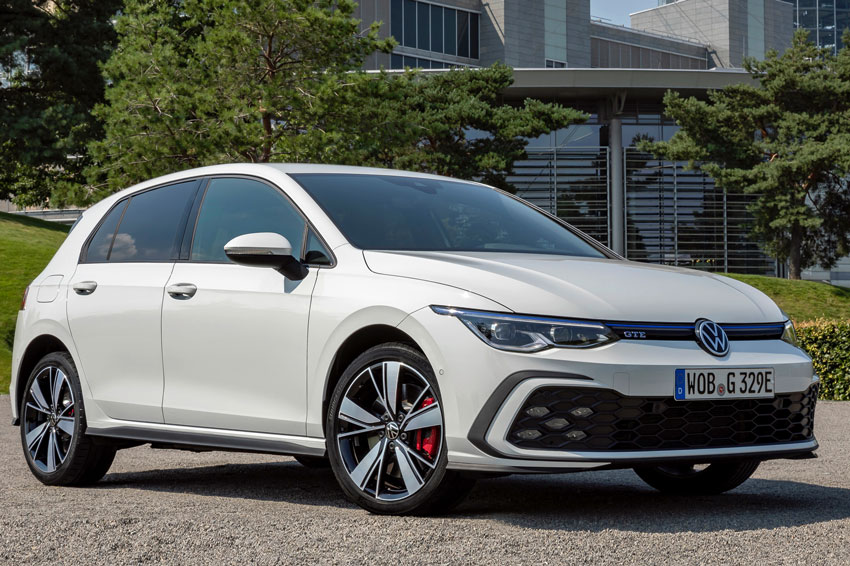 The plug-in hybrid Golf GTE is capable of delivering a range of up to 32-miles on electric power only. Featuring a 13kWh battery — 50% larger than the previous generation's — the Golf GTE uses a 110hp electric motor and 1.4 litre petrol engine for a combined 245hp: that’s the same output as the new Golf GTI.

While it’ll cover the 0-62mph sprint in 6.7 seconds, the headline-grabber is its official efficiency of 176.6mpg. CO2 emissions are also only 36g/km. 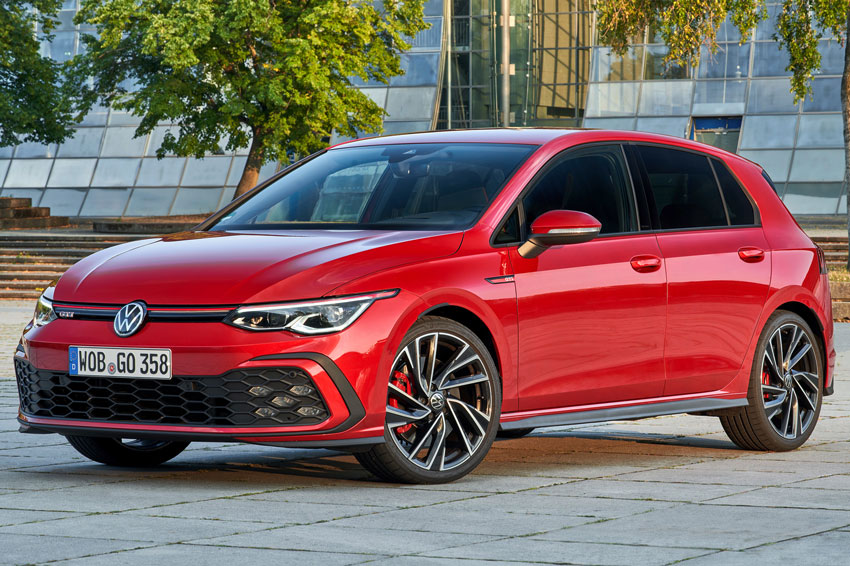 The latest incarnation of the iconic Golf GTI — still the benchmark for all other hot hatches — starts at £33,460 for the standard six-speed manual. Opt for the DSG seven-speed dual-clutch automatic, and entry price rises to £34,960. Both cars have a 155mph top speed, with the DSG being slightly faster to 62mph, at 6.2sec.

Powered by Volkswagen’s familiar ‘EA888’ turbocharged 2.0-litre four-cylinder engine, which sends power to the car's front wheels, the latest GTI has seen its power increased from its predecessor’s 228bhp to 242bhp. Retaining its familiar red styling accents, including for a new illuminated bar running across the front grille — the GTD uses silver and the GTE blue — the GTI also continues with its classic twin tailpipes and red brake callipers.

Inside, the sports seats are clad in a new iteration of the Golf GTI’s distinctive Jacara check cloth, while the sports steering wheel is leather-wrapped and heated, with paddle shifters for the DSG-equipped variant.