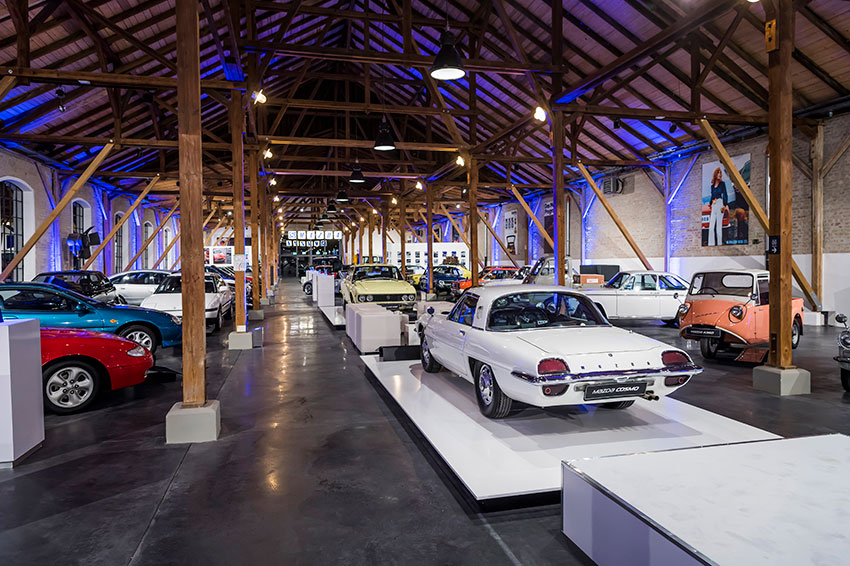 Join on us a trip to the Mazda Classic Automobil Museum Frey.

Tucked away in the centre of Augsburg in Germany sits an architecturally-imposing building. Striking as it is, externally there’s very little signage to inform passers-by exactly what life this former tram depot now lives. But for the inquisitive, or those in the know, persevere, walk past the cafe on the right, and there is a small sign: Mazda Classic Automobil Museum Frey.

For anyone with even the remotest interest in Mazda, this is heaven. There are now close to 300 rare and clever vehicles — some are in another ‘storage’ facility below and adjacent to the museum — representing every model and series launched by the manufacturer since the 1930s. Given 2020 is the Japanese carmaker’s centenary, I thought it was the perfect time to go knocking on the door of Walter Frey’s Aladdin’s cave.

Walter — a most genial seventy-something, with a head of shocking white hair and a beaming smile — loves Mazdas. In 1971 he founded Auto Frey in Gersthofen near Augsburg; it's still a family firm. Auto Frey has been a Mazda dealer since 1978, making it one of Germany’s first ever Mazda dealers.

The decision to go with the Japanese carmaker did not come by chance. The rotary engine, Mazda’s long-time signature feature, fascinated Walter and his passion for technology. And it’s that passion which evolved into the creation of the biggest and most comprehensive selection of heritage Mazdas not only in Europe, but the world. There are cars here that even Mazda doesn’t have in its own collection in Japan!

An avid car collector for more than 30 years, Walter’s first came when he discovered and bought his first Mazda Cosmo Sport in New Jersey in 1980. This car now stands as the proud centre-piece of all the vehicles on show.

Walter passed his passion down to his sons, Joachim and Markus, and together they have created this phenomenal collection of Mazda production vehicles. To accomplish their dream of owning a car museum, the Freys needed one thing above all else: a big enough building.

With the help of the local mayor, they found it. The old tram depot at Senkelbach had the space they needed plus plenty of historic charm. The building dates from 1897 and it enjoys substantial heritage protection. Lovingly refurbished, this venue has a unique flair, and it’s the ideal setting for their classic cars.

‘It’s about 13 years ago since we first had the museum idea,’ Walter explained as we chatted in his wonderful, endearing and intimate building. ‘We realised we had about 120 cars and they were getting dirty just sitting in a glorified shed.

‘So we asked the Augsburg Burgermeister if there was somewhere we could put a museum. He brought us to this place and we said, ‘it’s good, but it’s in bad condition, it’s not worth doing’. There wasn’t even a roof. We were ready to walk away.

‘Then he said: “I haven’t told you how much we’re asking for it’. When he told us the price, I turned to Markus and said, ‘we have to buy it’. To be honest, it was very cheap. Why? Because for quite some time we weren’t even allowed inside it because it could easily have caved in.’

With the restoration complete, the museum opened to thousands of visitors annually. Now we can have our very own private whistle-stop tour. 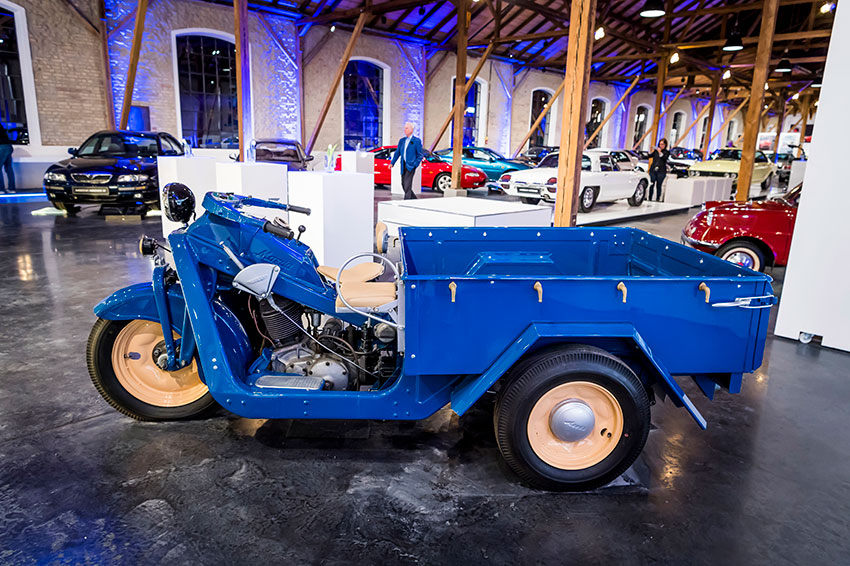 One of the vehicles that started it all. From 1931, Mazda made a line of three-wheeled pick-ups. This one has an air-cooled single-cylinder four-stroke engine delivering 9.5hp, and a payload of 500kgs. Later the three-wheeler range incorporated 30 different models with payloads ranging from 300kgs to 2000kgs. At its peak, around 130,000 were sold annually. 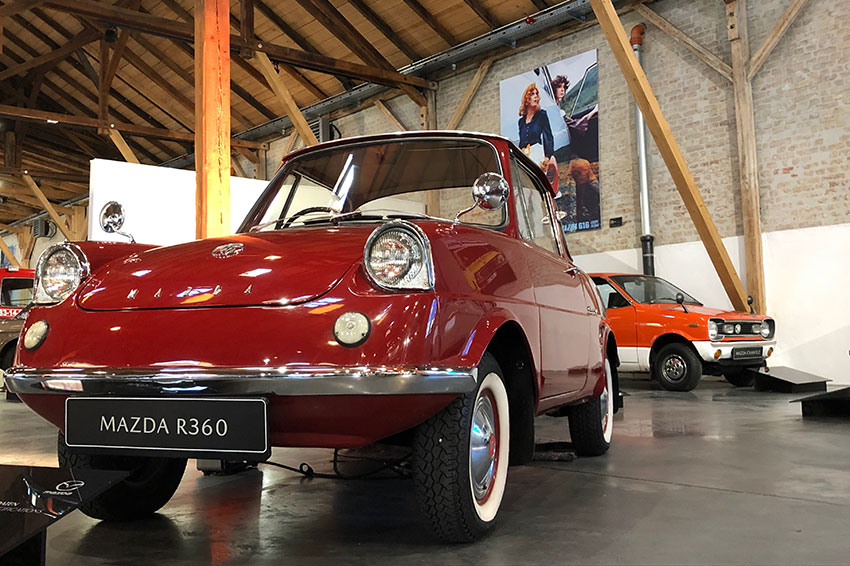 Titchy beyond belief — it’s only 2.98-metres long and tips the scales at just 380kg — Mazda claims it’s the lightest car ever made in Japan. Production started in 1960 and it soon achieved a 65% market share in Japan’s Kei car segment. Capable — with a very tight squeeze — of carrying four people, the 2+2 was powered by a 16bhp V2 engine at the rear. 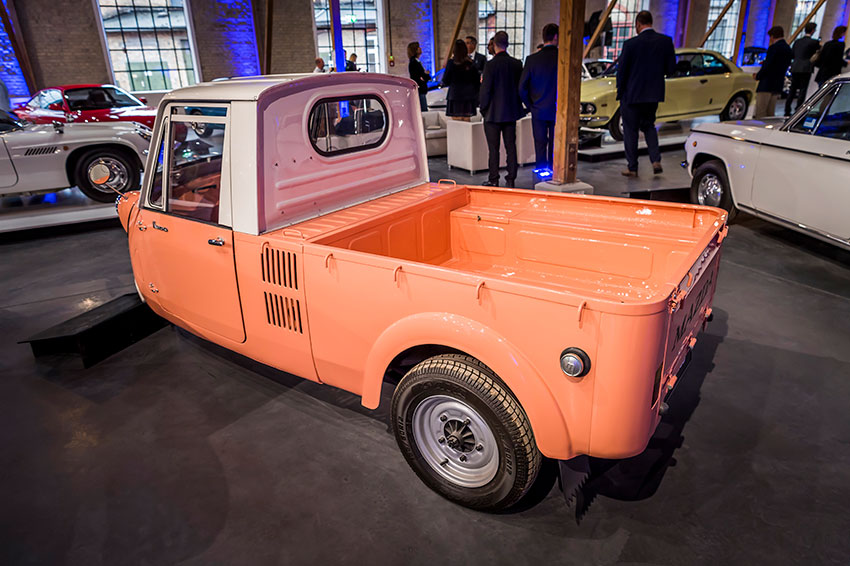 Another three-wheeled pick-up, but now with a covered cabin. Mid-engined — think, early supercar (well, maybe not) — power comes from an 11bhp two-cylinder engine. This three-wheeler was also produced under licence by Kia. 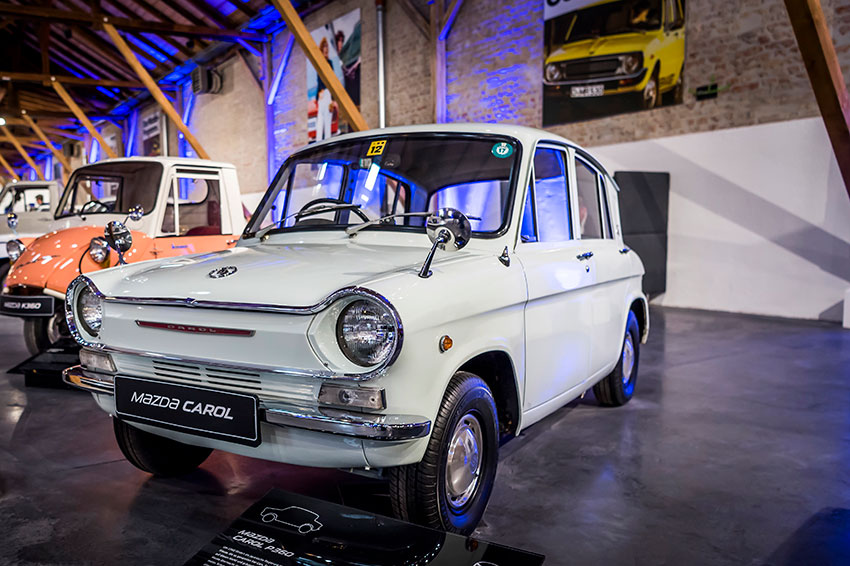 Sticking to Japan’s Kei car regulations — which specified a maximum vehicle size, engine capacity, and power output, so that owners could enjoy both tax and insurance benefits — this four-seat, four-door version is powered by a 358cc four-cylinder engine. In the race to be the ‘world’s smallest four-cylinder’, it was only beaten by a 356cc unit from Honda. 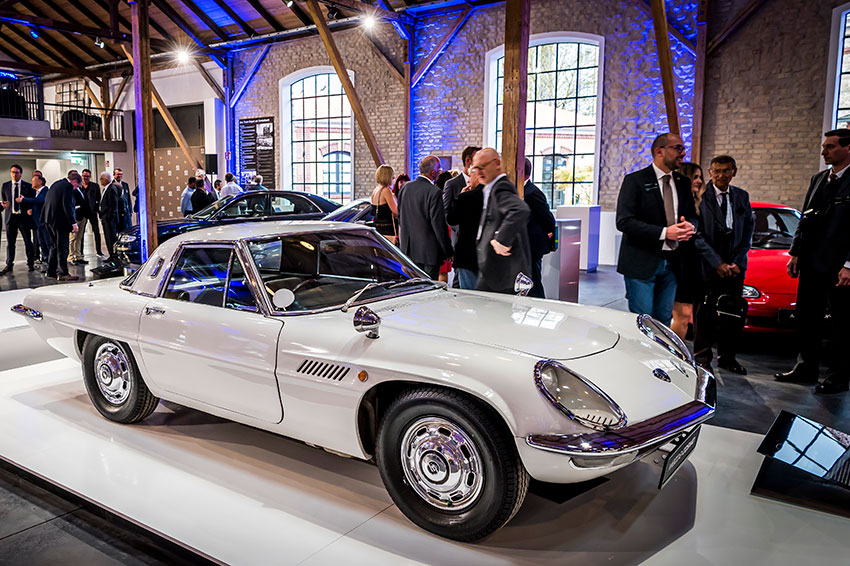 This is the car which started Walter’s Mazda Museum collection. ‘It was always so important to have a car like this,’ he smiled. ‘Even today I love it.’ Now, 40 years after he bought it in the States, it’s the first car which greets you as you enter the museum. It’s also the most coveted and photographed car in the museum. Powered by two rotary engines, it produces 128bhp and ha a top speed of 125mph. 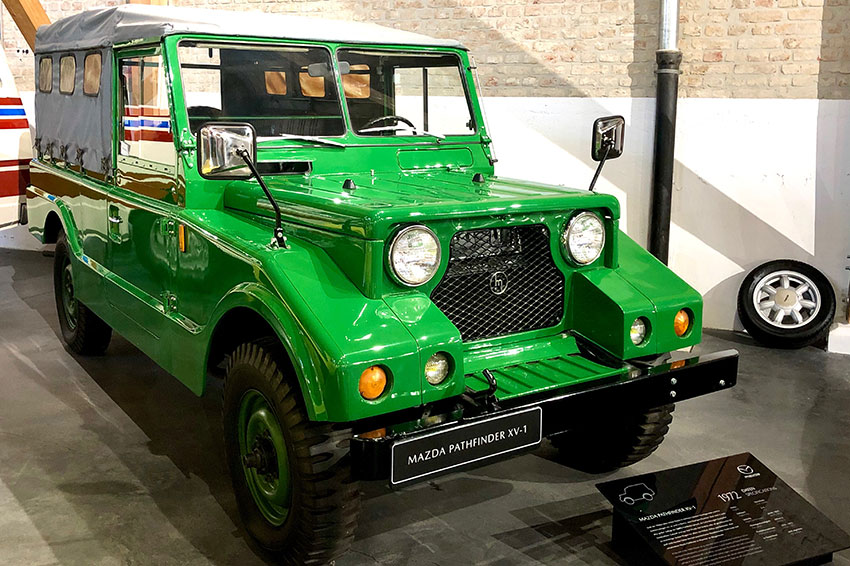 Built in Myanmar — formerly Burma — a small number of Pathfinders, a traditionally-constructed off-road vehicle, were created by Mazda. The 4x4, with a convertible soft-top or an enclosed nine-seat wagon, was mostly bought by the police, military and government agencies. This Pathfinder XV-1 was one of the most difficult of the models for the Freys to find for the museum. 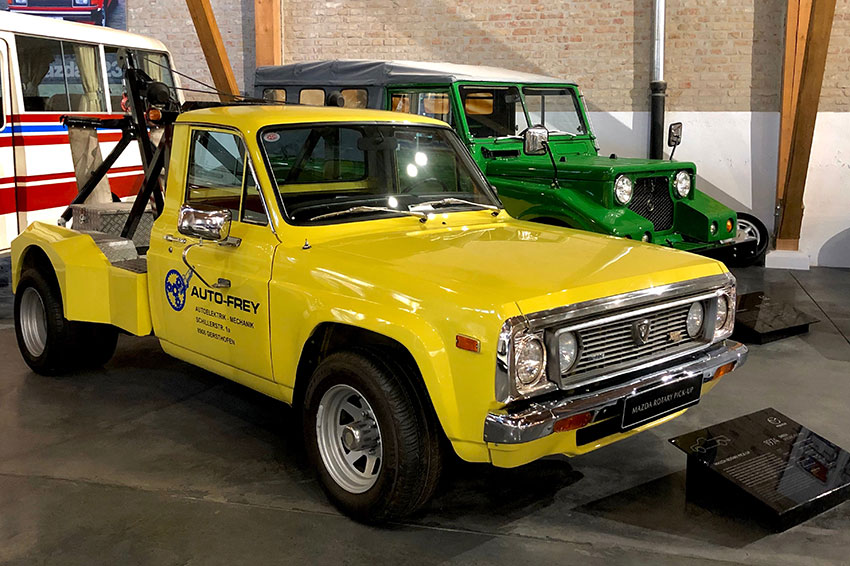 The only pickup worldwide with a rotary piston engine was available in North America, where a total of 16,272 units were sold; just 600 of them as tow trucks. They enjoyed an impressive fan base among families, farmers, workshops… and even racers. The most impressive racing victory by a rotary pickup came in the 1975 Mojave 24-hour Rally. 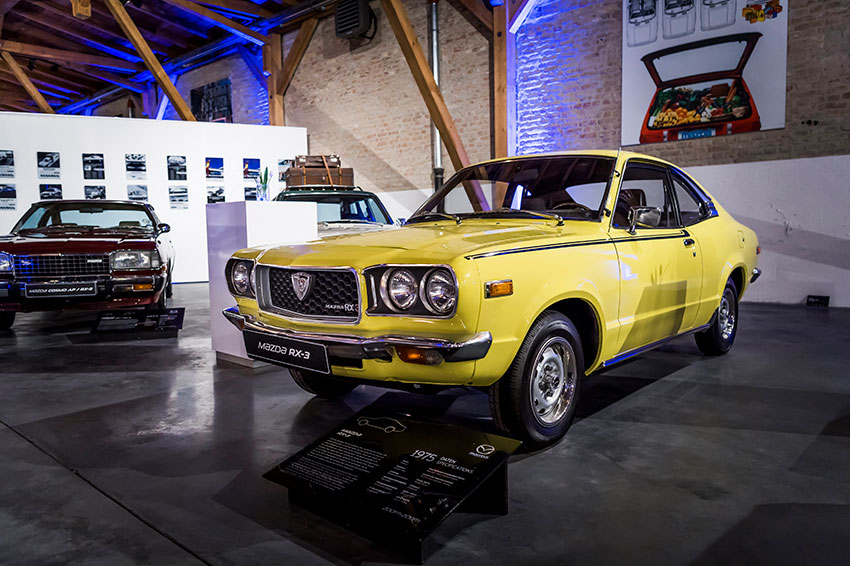 Another rotary-powered wonder. The RX-3 racked up more than 100 touring car victories around the world thanks in no small measure to the power and versatility of its Wankel engine. 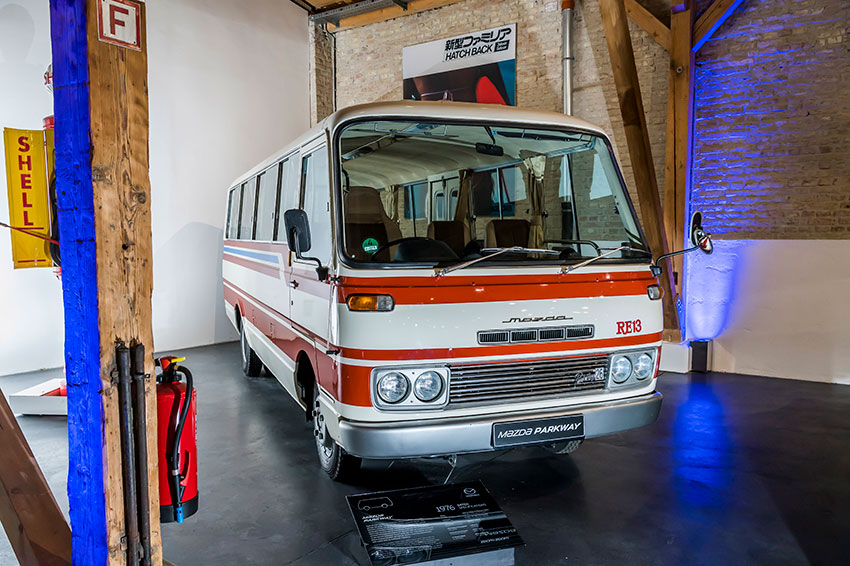 No, your eyes don’t deceive you: this is, indeed, a Mazda rotary-engined bus. It was available in two forms; either a posh 13-seater with ‘super-deluxe’ features for first class travelling, or a 26-seater with a top speed of 74mph. Not surprisingly, the Parkway was one of the fastest buses in the world in its time. 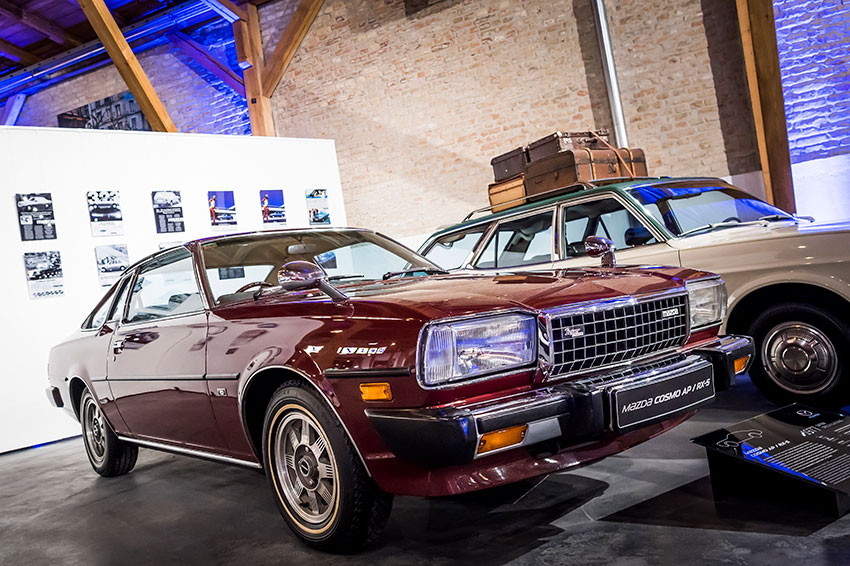 This is one of Walter’s most cherished models, and it’s one he knows many, many people come specifically to see. Why? It’s a European version of the rotary-powered RX-5 coupé, with different styling to Japanese cars. And from our perspective, what makes it even more interesting is he bought the car in Cornwall. Markus travelled to England to pick it up, and spent time holidaying in the south-west county with the car before heading back to Germany. Worth highlighting the big ‘opera’ windows where you’d normally find an obstructive B-pillar. 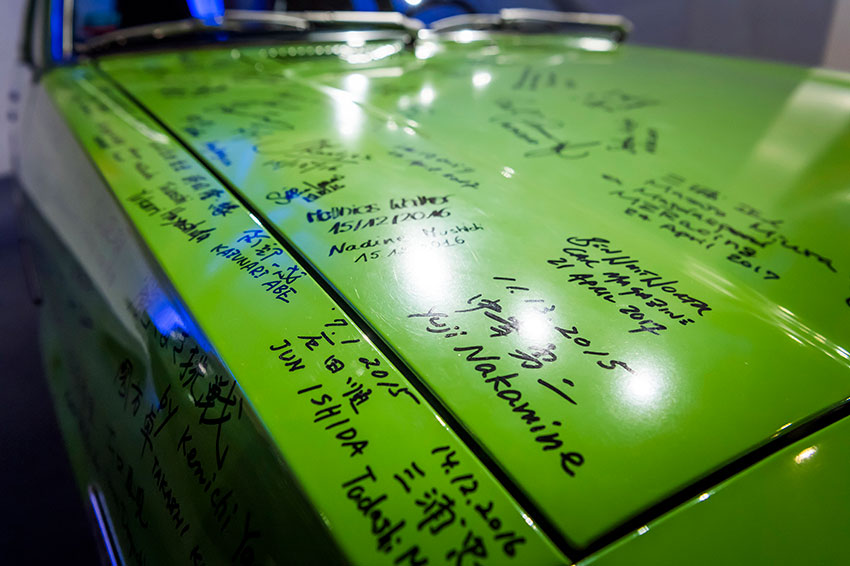 We all love the Mazda MX-5 and RX-7, but for many, if it wasn’t for the 323, those models that followed may never have existed in the first place. In 1977, the first 323 was driven more than 9000 miles from Hiroshima to the Frankfurt Motor Show, ready to go head-to-head with the Volkswagen Golf. The 323’s triumph created the path to success for Mazda. The signatures on the car are from famous or key visitors to the museum since it has opened, including senior people from Mazda in Japan. Strangely, I wasn’t asked to sign it. 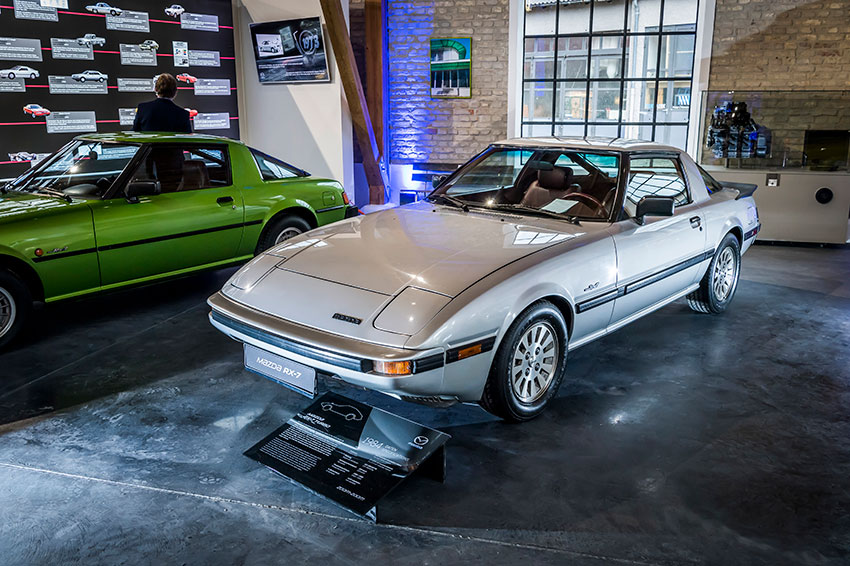 I guess if you’re going to have an RX-7 — the finest example of a rotary sports car — in your collection, it should be the one which was gifted by Mazda to the creator of the engine, Dr Felix Wankel. Obviously a very kind gesture. But there was just one problem: Dr Wankel didn’t have a driving licence. 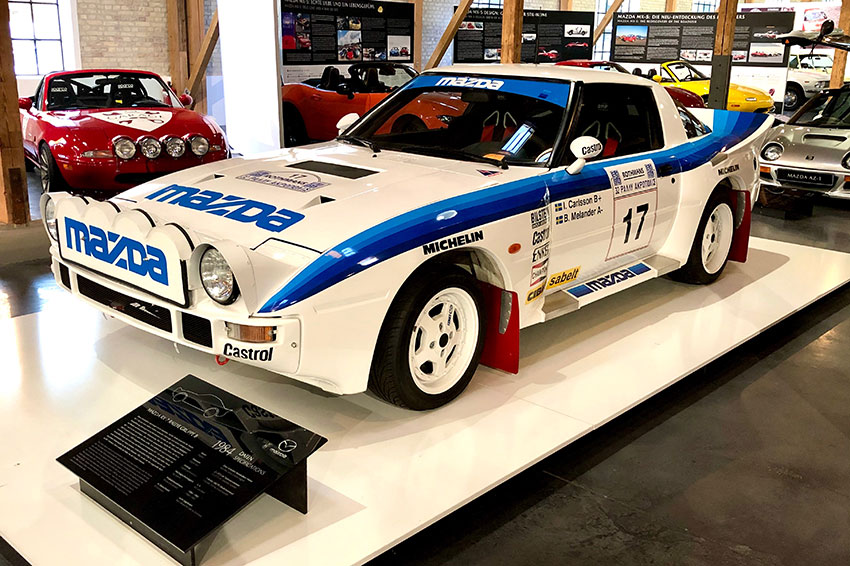 The RX-7 also went rallying. In 1985, this RX-7 Group B rally car, piloted by Ingvar Carlsson, finished third in the Acropolis Rally. I love the stylistic white and blue livery, and for me it was one of the standout cars on display. 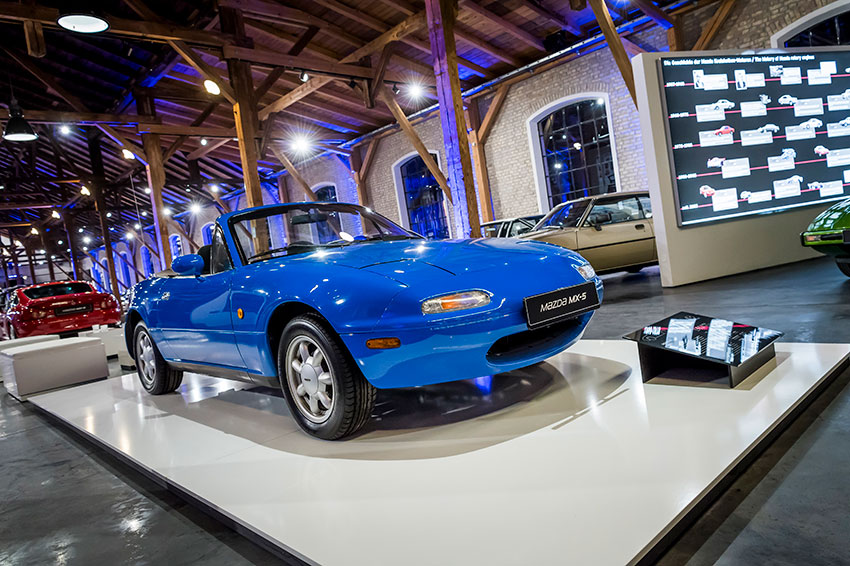 It’s the world’s best-selling sports car, with more than one million leaving the showrooms. Not only was it affordable and reliable, but the MX-5 lifted rear-wheel drive roadsters to a new height. It was the sports car everyone wanted. Even today, in its fourth-generation and with new prices below £24,000, it remains the one to beat. The MX-5 is one of the all-time great modern classics. 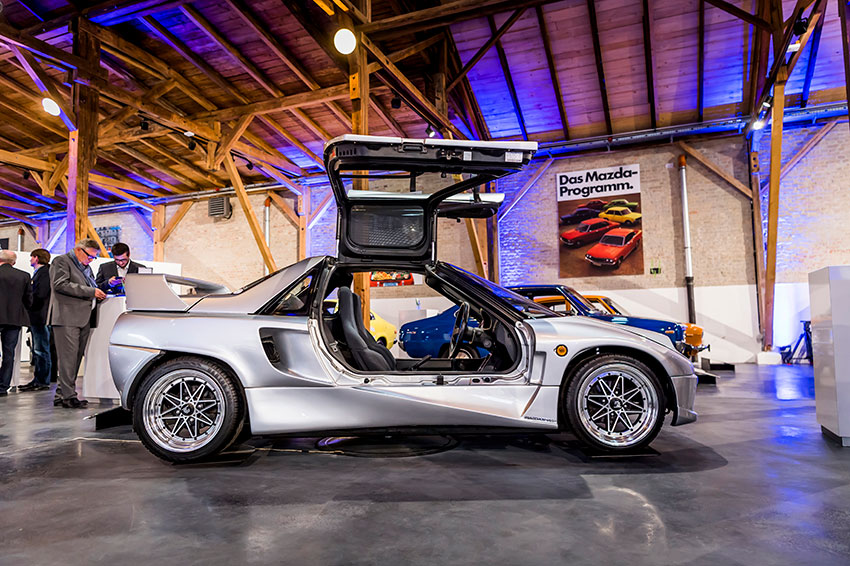 Hmmm… ok. The AZ-1 isn’t ‘officially’ a Mazda. Built to the 63bhp Kei supercar recipe, this stunner includes a MazdaSpeed bodykit with extra sculpting, plus there are four very intricately designed alloys. As for the doors? Well they’re just brilliant. 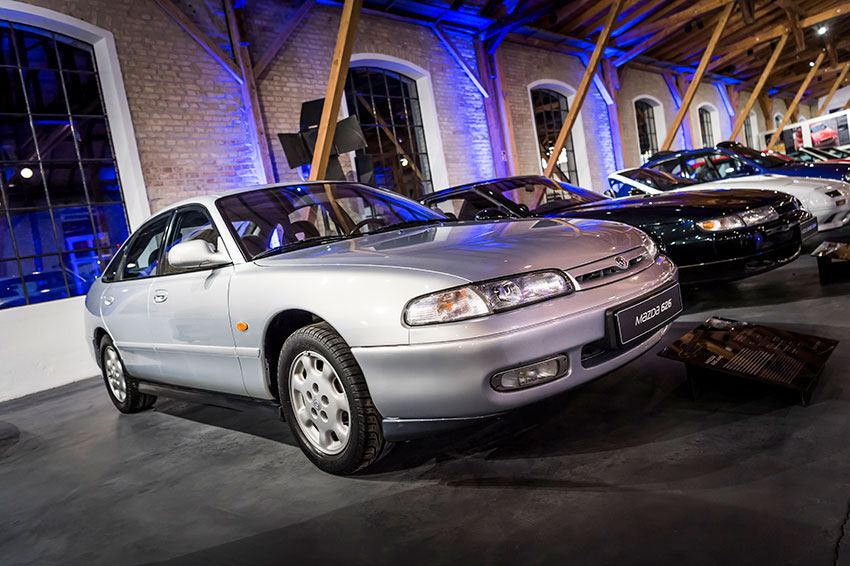 Of course, not every car in the collection is a stylistic head-turner. But while this 626 may look on the mundane side, it is fitted with four-wheel steering. And squeezed under the bonnet? A 165bhp V6. Mighty impressive. 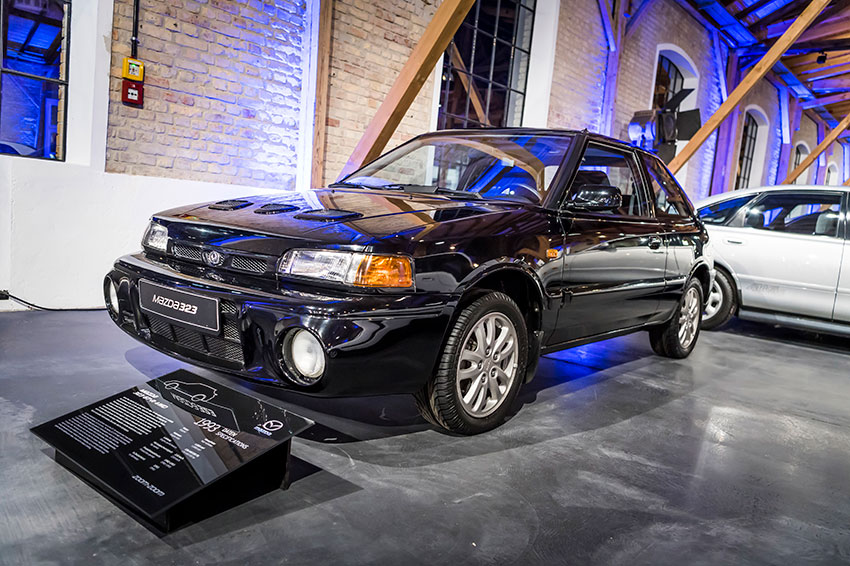 If ever there was a Mazda wolf in sheep’s clothing, this is it. Of course, we all know about the Lancia Integrale and Ford Escort Cosworth. But did you know Mazda also had a serious player in the four-wheel-drive hot-hatch sector in the nineties? Step forward the 323 GT-R. Boasting 185bhp, it was a rally homologation special with clever differentials. Subtle styling too. Did I notice what? Oh, the massive rally stage fog lamps. Honest… never noticed them. 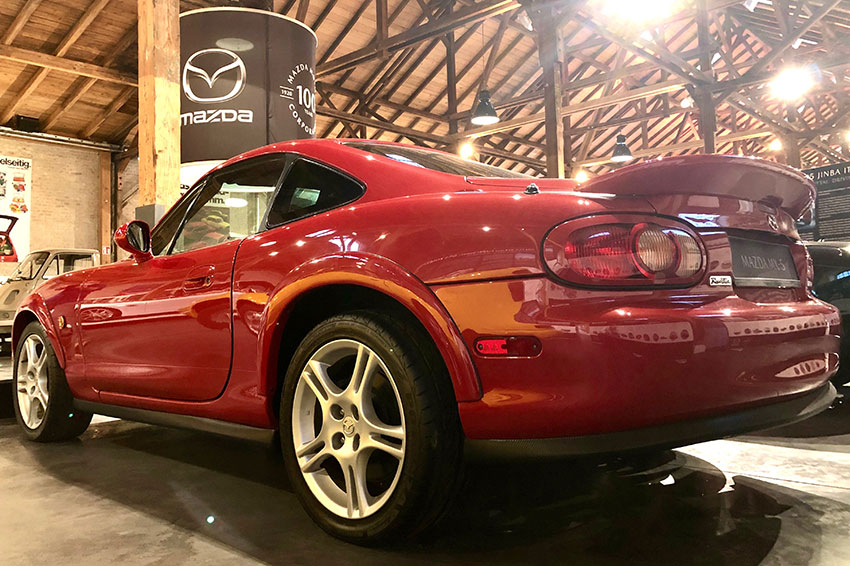 You certainly don’t see many of these around. Just 200 MX-5 Coupés were produced for the Japanese market in the early 2000s. And no, your eyes don’t deceive you: this is fitted with a proper fixed roof. Personally, I think it looks terrific. And if you look closely, on the lower left of rear, between the light cluster and registration plate, there’s still a ‘Roadster’ badge. 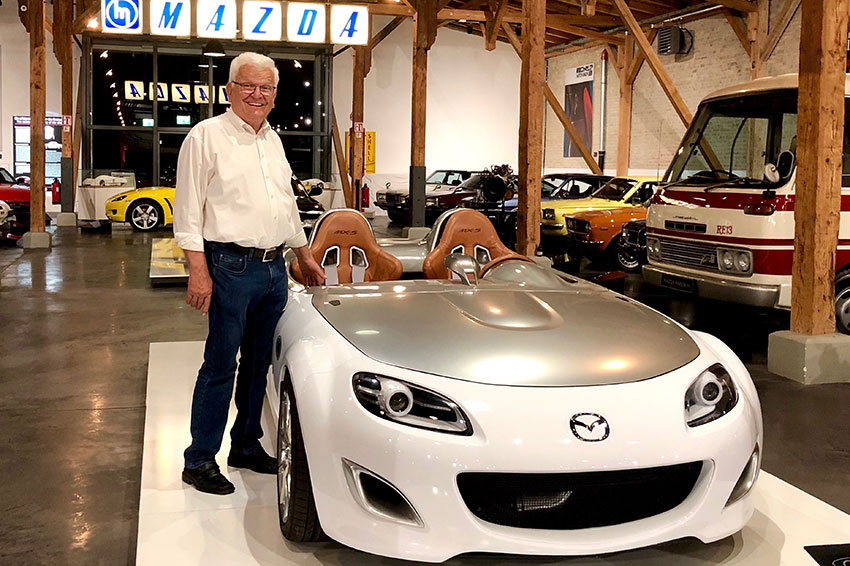 One of, if not the, most modern cars in the collection. The MX-5 Superlight concept from 2009 is based on a Mk3 MX-5, and previewed the weight-saving measures which would be applied to the Mk4 mode, more than five years later. Mazda demonstrated the Superlight on the hill climb at the 2010 Goodwood Festival of Speed. The car still sports the sticker from the day.

It’s one of Walter’s favourite models in the museum, which was why he chose it to be photographed next to. Walking towards it, and smiling, he whispered: ‘We’re actually borrowing this from Mazda, because they’re not allowed to sell it to us. But I’m just keeping quiet, and hoping they forget all about it.’