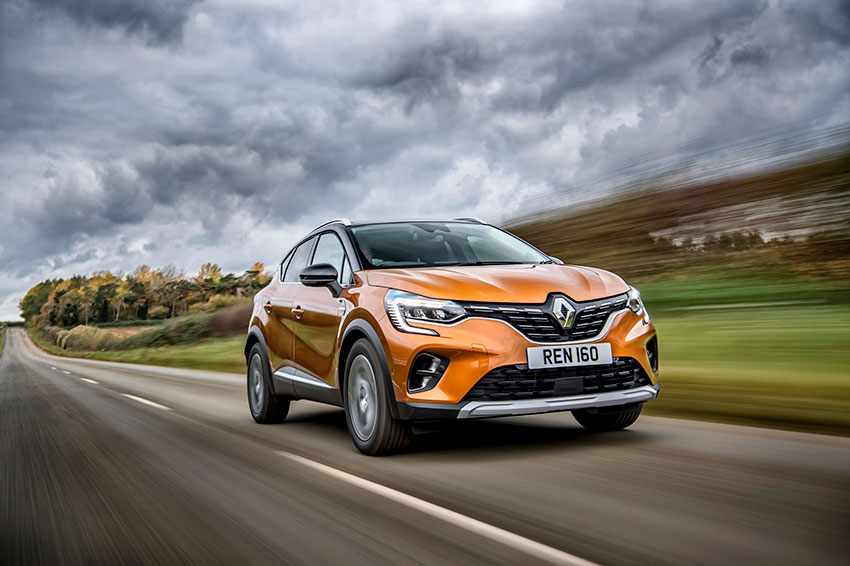 There are many electric and hybrid cars already on the market. And there are going to be more and more of them as this decade progresses. Why? Well, the UK government wants this country to be free from pollution. The aim is to bring greenhouse gas emissions to net-zero by 2050, and as part of that, it'll be against the law to sell new petrol or diesel cars from 2035. The word on the street is that this might come in even earlier. So, it's a case of having to get used to the way some new cars are powered – and, rather than be nervous, we should be excited.

So, what’s new in this emerging electrified automotive arena then? The Renault Captur E-TECH Plug-in Hybrid (PHEV), that’s what! The SUV uses a 1.6-litre petrol engine with twin electric motors. The car also houses a high capacity 9.8kWh battery, so, as you can tell from its name, this car still combines the best of both worlds and will help ease some of Renault’s consumers into the electric age (of course, the fully electric ZOE is already popular with many).

How does the Renault Captur E-TECH Plug-in Hybrid drive? 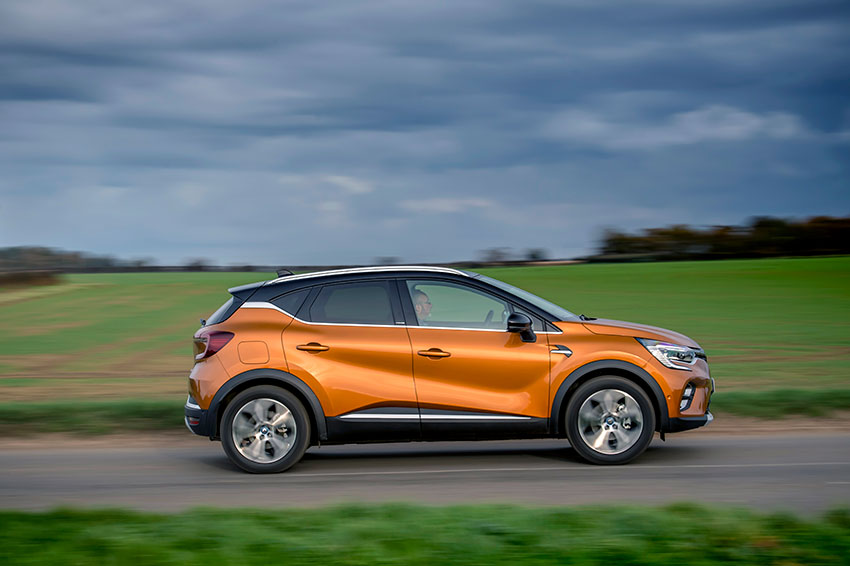 The PHEV starts up in electric mode for peak efficiency and instant pulling power, making it an ideal compact vehicle for use in urban areas. And thanks to the mixture of the electric motors and a conventional engine, this Captur offers a total output of 160ps. This means zero to 62mph can be done in 10.1 seconds, and a maximum speed of 108mph is possible. If you want to stay in all-electric mode, the car will top out at 84mph ¬– more than enough for motorway trips.

Renault offers a bunch of driving settings known as ‘MultiSense’. The system consists of the following modes: ‘Pure’ employs all-electric mode; ‘Sport’ uses the powertrain’s maximum capacity, engaging both electric motors and the petrol engine for the most alert drive; ‘MySense’ is the default driving setting that adapts to your inputs and the driving conditions and ‘E-Save’ puts a stranglehold on the electric motor and asks for the petrol unit to propel the SUV. This saves around 40 per cent of battery charge for consumption later on.

The car rides firmly and handles corners well, almost to the point of feeling sporty. However, it does get a little fidgety when driving over patchy urban tarmac.

How far can it go on electric charge alone 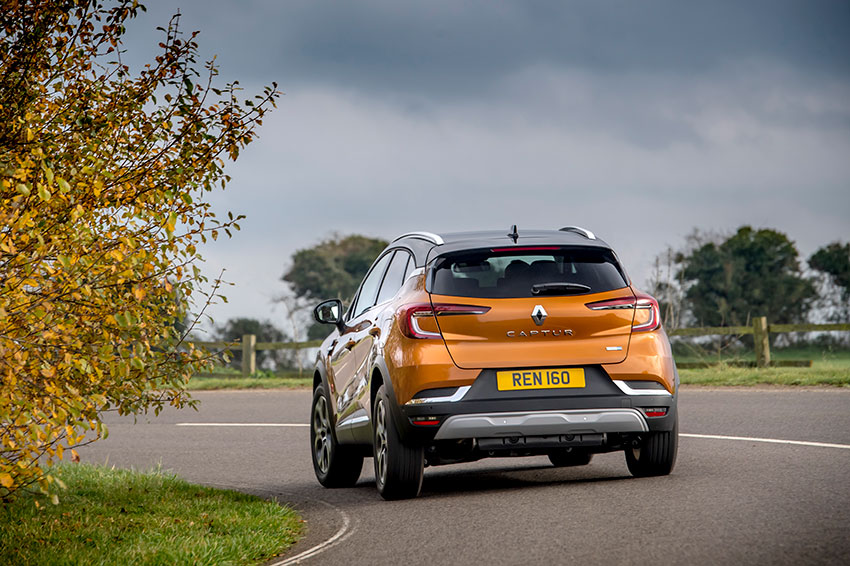 ? The PHEV can move under electric power alone for up to 30 miles. When you think about it, if you charge the SUV up enough, this is ample for most journeys in town. Therefore, this makes the car a compelling form of transport if you live in a built-up area, and have access to charging. Many workplaces, hotels, shopping centres and garages are getting charging points put in, so charging the Renault shouldn’t be a worry. But if your town is slow to install chargers, the Captur E-TECH Plug-in Hybrid comes with a complimentary BP Chargemaster wall box that charges from zero to 100 per cent in about three hours. The wall box is discreet and is ideal for use overnight. As well as this, a type two charger cable and a domestic charging cable are provided with all Capturs, with room under the boot floor to keep them out of sight. The Renault’s charging port is positioned on the right-hand side of the car and comes with an LED indicator light to show the state of charge. 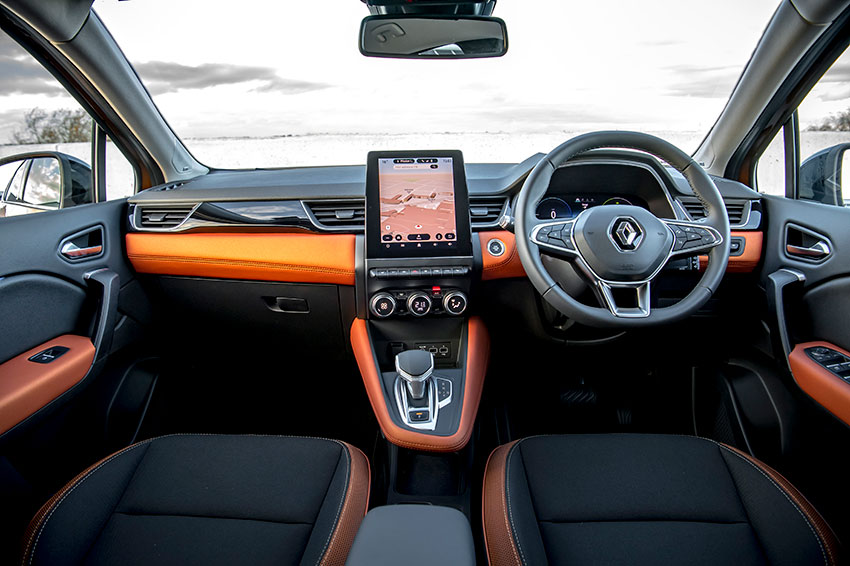 The five-door SUV hybrid will seat five, but four-up is perhaps more realistic, and certainly more comfortable. The cabin is pleasing to the eye, with lots of soft-touch materials on the doors and the dashboard. What’s more, the switchgear is intuitive. The only downside compared with a regular Captur is that cargo capacity is smaller in the PHEV, due to the plug-in gadgetry eating up some space. The standard boot room is 422-litres, while the E-TECH's boot capacity is 379 litres.

But guess what the best thing about the Captur E-TECH Hybrid is? Yep, you’ve guessed it – it’s efficiency and low emission levels. The new model only produces 34g/km of CO2, and it’ll do up to 188.3mpg. Now, if that’s not a reason to check this car out, I don’t know what is. Feel a little less worried about the future of cars now? Good; really, there's nothing to fret about, if this Renault SUV is anything to go by. 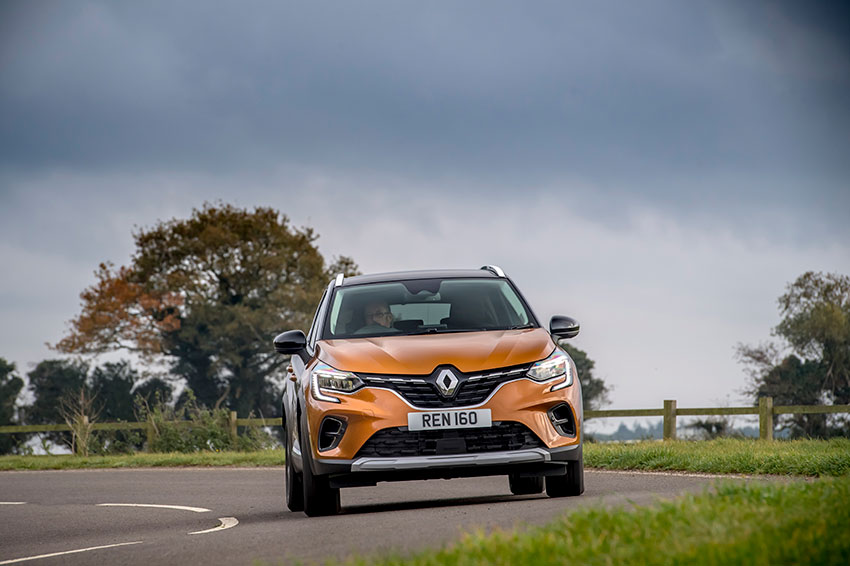