Mercedes-Benz has added further refinement to the 2021 C-Class saloon and estate models. 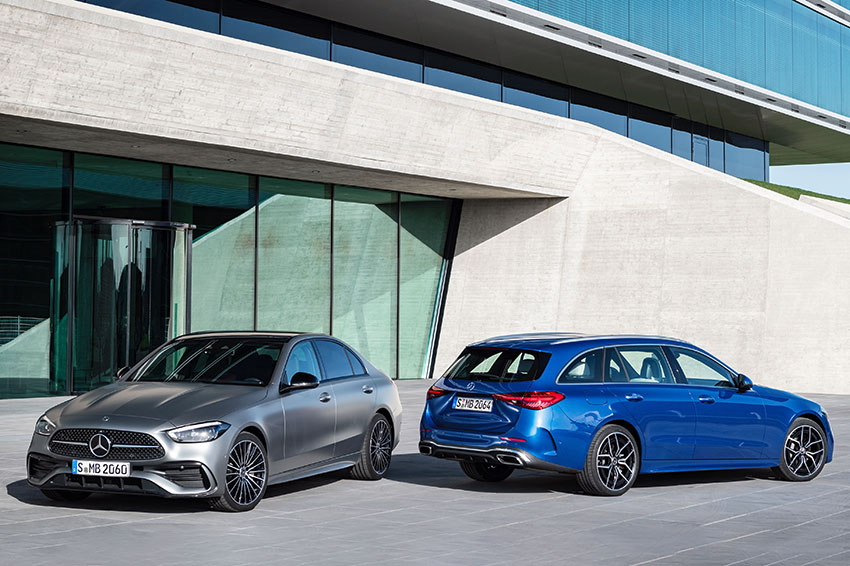 Mercedes-Benz has unveiled its all-new C-Class saloon and estate with more tech and refinement lifted from the S-Class. Order books for the fifth-generation model will open shortly, with first deliveries due in summer. The last generation C-Class sold more than 2.5 million making it the brand’s most popular model internationally over the past decade, so this is an important newcomer for the German giant.

The new Mercedes-Benz C-Class is set to go head-to-head with the traditional rivals in the prestige company car stake, including the BMW 3 Series and Audi A4, plus facelifted models of the Alfa Romeo Giulia and Jaguar XE. UK prices have still to be confirmed, but expect them to start around £35,000. As usual, it will be available as both a saloon or stylish, sporty estate.

OK, so what are the main external differences? 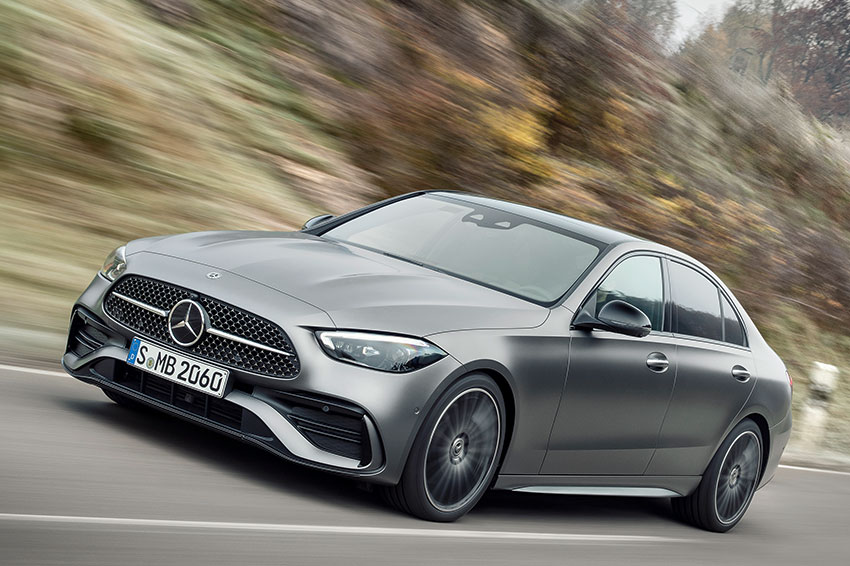 It’s fair to say the newcomer certainly looks a tad sportier. Adopting a number of design cues first seen on the facelifted E-Class, the C-Class now boasts a new bonnet with twin power bulges. And in addition to a new stronger shoulder line, the designers have pushed the passenger cell further towards the rear of the car in an effort to make the 2021 model a more ‘cab-backwards’ saloon.

At the front, there’s a new grille — again inspired by the E-Class — plus a full LED headlight display; the latter again mirroring that of its larger sibling. At the rear there’s new LED tail-lights, plus the boot lid now incorporates a sporty lip spoiler.

The latest model has also grown. It’s 65mm longer than its predecessor at 4,751mm, and 10mm wider at 1,820mm. The sporty stance is boosted by the fact the roofline is now 7mm lower, allied to the fact the front and rear tracks are wider by 19mm and 48mm. It also has a 25mm longer wheelbase.

And what about the interior? 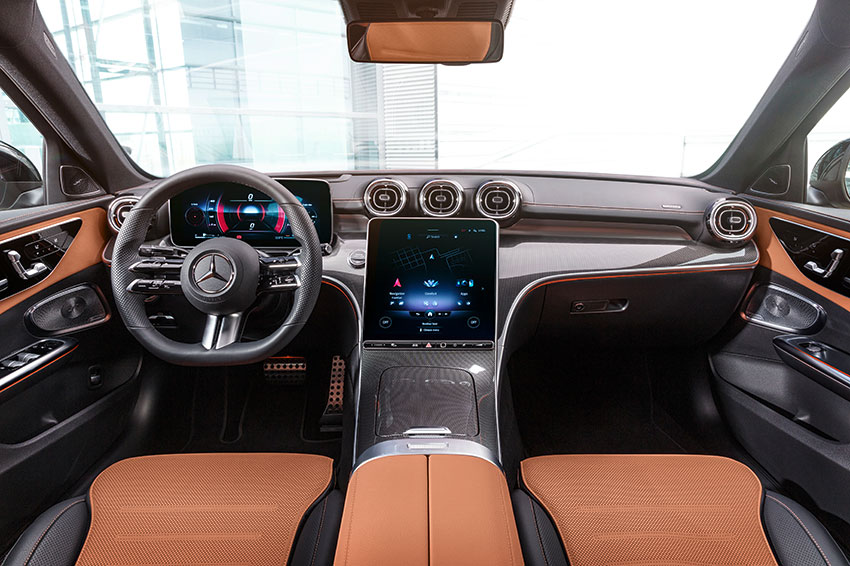 Perhaps not surprisingly, the most noticeable changes are to the cabin, where designers have enhanced the C-Class with much of the style and tech of the range-topping S-Class. The dashboard has been cleared of buttons, with functions now contained within a huge upward-angled central portrait touchscreen; in standard form it’s 9.5 inches tall. Tick the options box, and you can increase it to 11.9 inches. A 10.25-inch floating digital instrument panel is now also standard, while a larger 12.3-inch screen is, again, an option. Both can be customised to any of three themes: Discreet, Sport and Classic.

I guess there must be some new tech?

You’re right; there is. And plenty of it. The main focus is the MBUX infotainment system. Mercedes-Benz’s augmented-reality navigation is also available, and a fingerprint scanner can load up your Mercedes Me profile in an instant.

Over-the-air updates are also available on the new C-Class, via the MBUX system. As soon as an update is available, it’ll download automatically. And by subscribing to, or purchasing them directly from the infotainment screen, buyers can now install new functions post-sale, such as In-Car Office, or music services such as Spotify. Songs can even be requested via Hey Mercedes voice control.

Finally, the final big new technological stride is MBUX Smart Home functionality. It means that if you have smart home appliances or fixtures, such as heating, shutters or lighting, they can be linked to and controlled remotely from the car.

What engine choices are there? 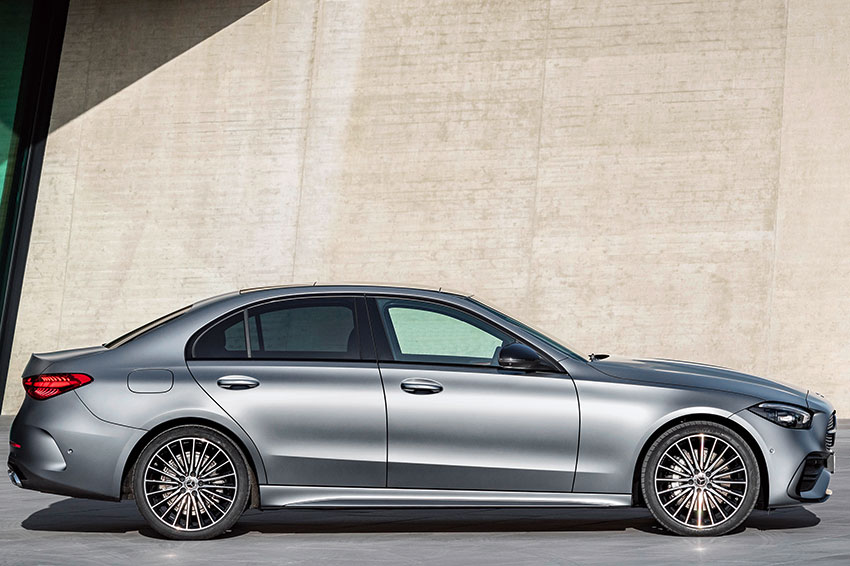 Buyers will be able to choose from a range of four-cylinder petrol and diesel engines, each being aided by 48-volt hybrid tech. There’s a myriad of choice, but the core units are:

A nine-speed automatic gearbox is standard across the range, while the C200 and C300 petrol models can also be ordered with Mercedes’ 4Matic all-wheel drive.

The range will also be supplemented by a new plug-in hybrid C-Class. Mercedes-Benz says it’ll cover up to 62 miles on a single charge, and the first PHEV will use a 2.0-litre petrol engine and a 127bhp electric motor.

What do we know about the C-Class estate? 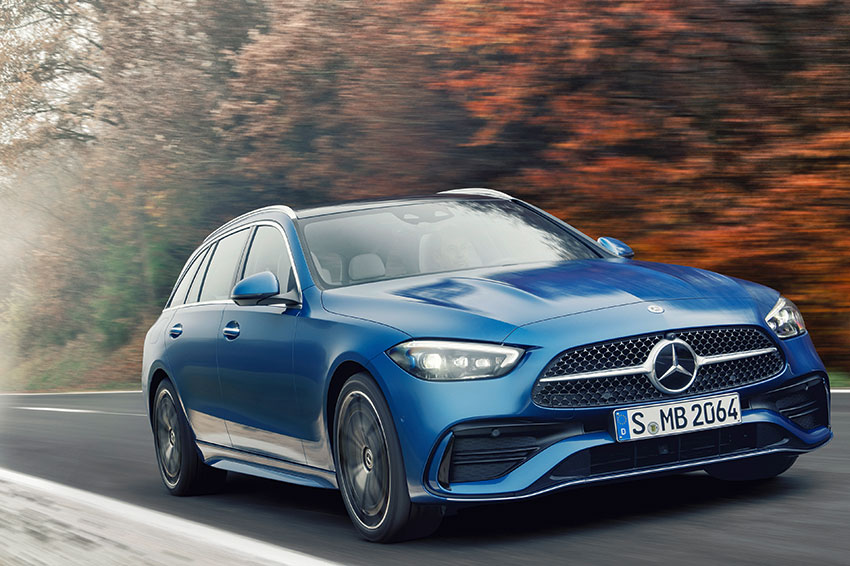 Not surprisingly, both the saloon and the estate have the same passenger room both front and rear. Worth highlighting both models now benefit from an extra 21mm of rear legroom.

Obviously, the biggest difference comes with storage. The saloon’s boot space is the same as before, 455-litres, which is a tad smaller than the rivals from BMW and Audi. 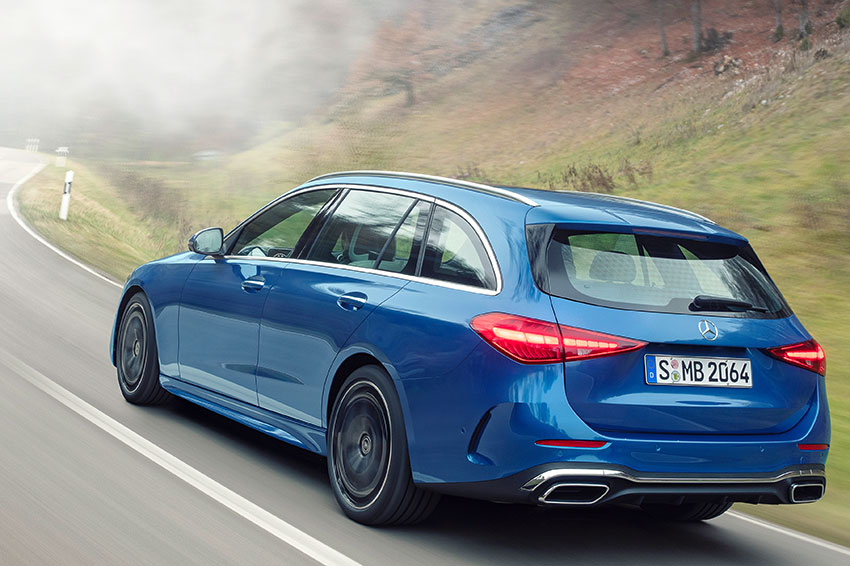