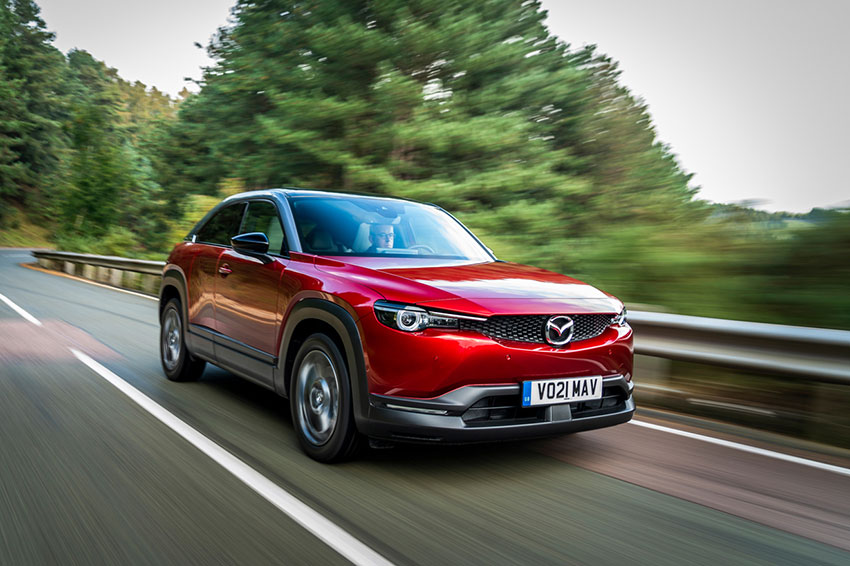 Mazda has joined the electric revolution with its battery powered MX-30 compact SUV – and it’s a car with a difference.

At a glance, it’s very similar to the Japanese brand’s more conventional CX-30 activity vehicle but with rearward opening back doors, plenty of environmentally-friendly features and superb all-round handling, the MX-30 will get the neighbours talking.

With zero emissions and fine performance the MX-30 is set to carve out a niche for itself as a keenly priced family car that pound for pound is the best EV on the market when it comes to vehicle dynamics.

That’s down to some clever electronics which Mazda is deploying on its first EV that brings in torque vectoring automatically to the rear wheels, supplementing the set up to the front wheels where the power goes down. 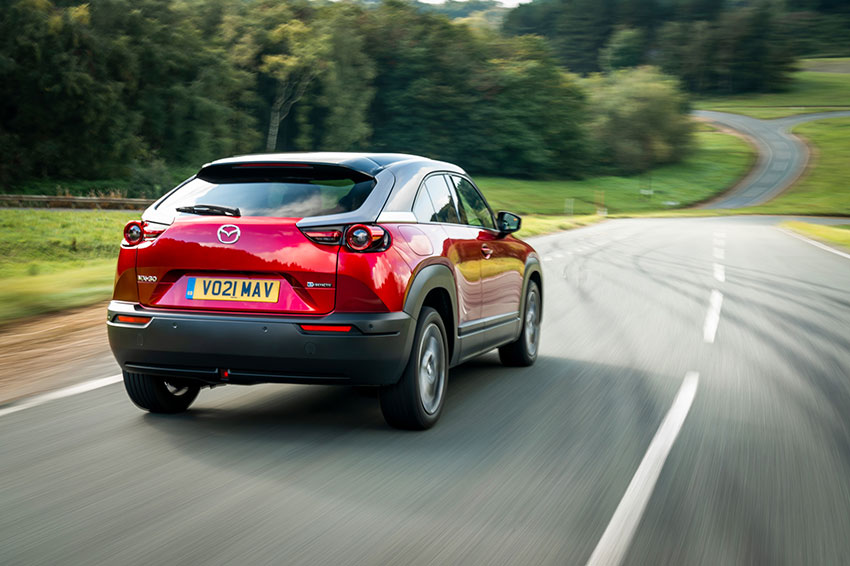 The result is a delightfully composed and controlled ride under all circumstances and makes the MX-30 a joy to drive.

Initially four trim levels will be offered with the line starting from £26,045 after the government grant for low emission vehicles – and in the current EV world that is highly competitive.

The range will top out with high specification GT Sport Tech models costing from £30,345 after the now reduced £2,500 grant with mid-grade Sport Lux versions sitting in the middle at £28,045.

For the time being Mazda is also offering the MX-30 in First Edition specification priced from £28,445 and these come with adaptive LED lights at the front, more at the rear, a satin finish side panel in the trim as well as an eco-friendly interior that can be found on all versions with grey or man-made leather seat upholstery made from recycled plastic bottles. 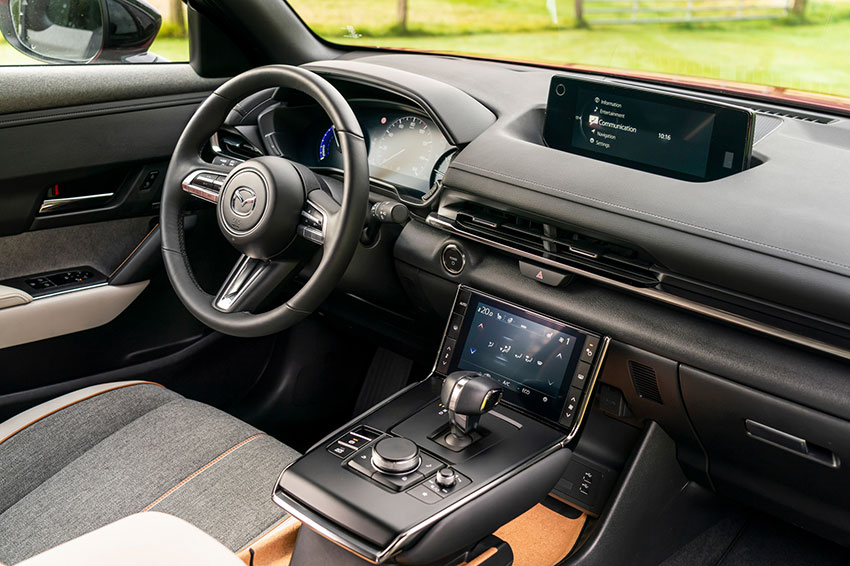 There’s also a flashback feature which uses cork to cover parts of the centre console and interior trim – and that harks back to Mazda’s origins as the Toyo Kogyo Cork Company which was founded in 1920 before it branched out into automotive. 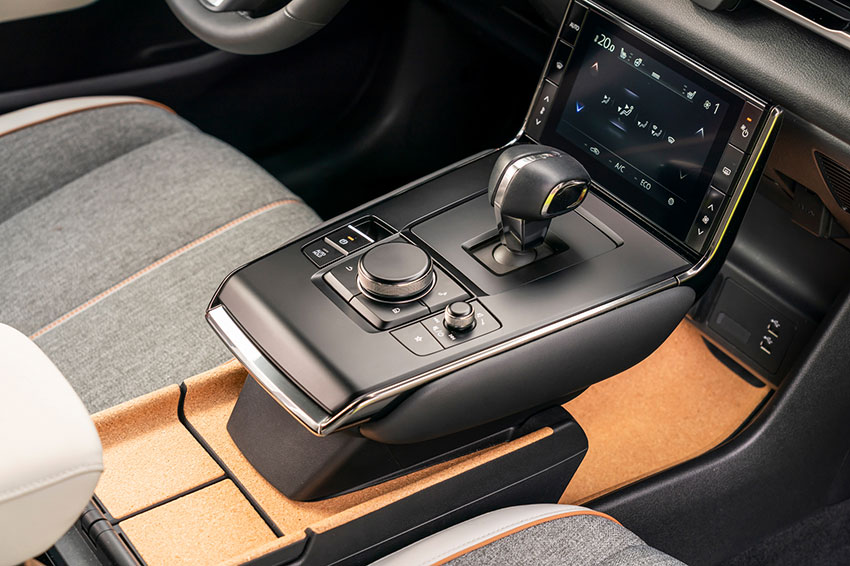 All versions have a high equipment list and include a reversing camera, cruise control, sat nav and a head up display as standard kit.

The MX-30 has a city-friendly range of up to 165 miles on a full charge and in everyday use Mazda says it should be capable of around 124 miles before needing to be plugged in.

That’s similar to what can be expected from the electric version of the MINI and the Honda-e and Mazda says its research indicates that most drivers travel less than 30 miles on a daily basis. 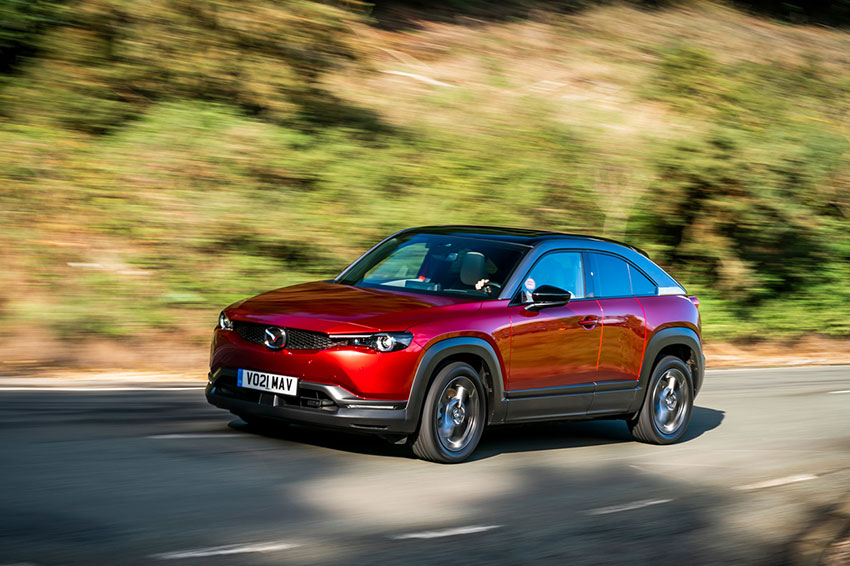 Recharging from a fast charger can be done up to 80 per cent of battery capacity in 36 minutes. A full charge from a home charging point will take around five hours.

Each model comes with a Type 2 AC charging cable and a socket for DC rapid charging and the car’s recharging point is situated on the rear offside wing, 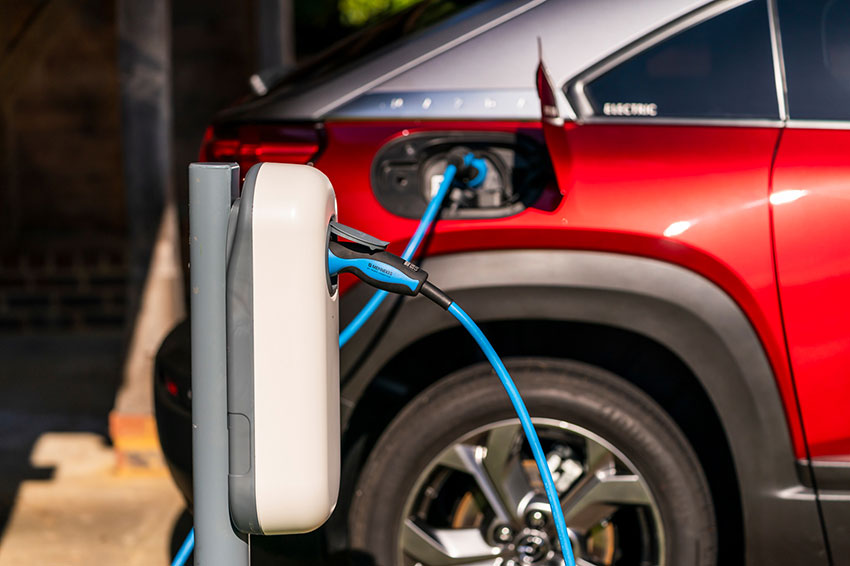 On the road it is as complete a family car as can be imagined and the Sport Lux model we tried was showing an available range of 116 miles at the start of our drive.

Fifty six miles of good motoring took the car’s battery capacity down to 45 per cent and the remaining range to 58 miles with the onboard trip computer revealing we could have added a further 16 miles to our range had we not been using the climate control system.

The MX-30’s systems can also be hooked up to a smartphone app for remote use and monitoring and give information about all aspects of operation including how long it will take to recharge as well as allowing for journey routes to be loaded and for the car to be preheated before you get in.

It’s all very civilised and makes the MX-30 as well equipped as some EVs costing almost twice as much.

Performance data reveals a 0 to 62 acceleration time of 9.7 seconds from the car’s 145ps powertrain with a maximum speed of 87mph.

Boot capacity ranges from 366 litres to 1,171 litres with the rear seats folded – and that’s much more than that of the electric version of the MINI or the Honda-e.

The MX-30 we sampled sat on 18-inch alloys and its SUV-like styling was embellished with body protection running from bumper to bumper and around the wheel arches and sills.

It’s a stylish take on design and the MX-30 feels a real driver’s car with precise steering, quiet running embellished by a faint ‘real car’ noise from a sound generator and regenerative braking allowing for single pedal use. The regeneration settings – which boost the car’s range by putting power back into the battery under braking - are controlled via paddle shifters either side of the steering wheel and offer two levels to help get the best out of the electric motor.

Other handy features include an auto-hold function for the electronic parking brake which is sited on an elevated central control panel above a sizeable device storage area complete with two USB ports and a 12-volt outlet. An 8.8-inch widescreen display screen sits at the top of the dashboard with a secondary seven-inch colour touchscreen to control the ventilation settings sited aft of the gear lever on the central console.

There’s also a seven-inch TFT display contained in the instrument panel to give the driver extra information about the car’s status and performance. The cabin is designed to seat five in some comfort and the MX-30’s ‘freestyle’ doors are something of a wow factor. 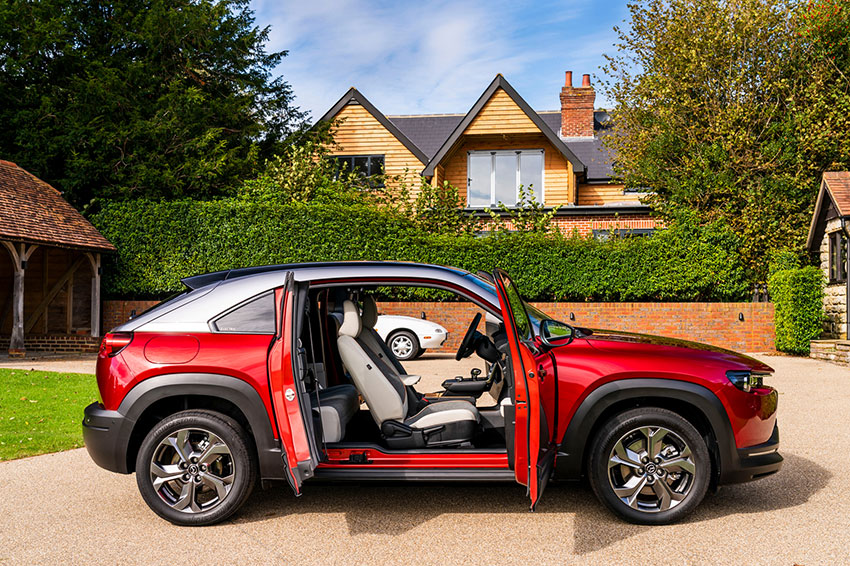 Mazda had a similar arrangement on its RX-8 rotary-engined sports coupé some 10 years ago but the set up on the MX-30 is much more practical.

As such there is easy access to either the front or back seats with a wide, pillarless opening with rear-seat entry helped by a clever folding mechanism which moves the front seat forward at a single touch. 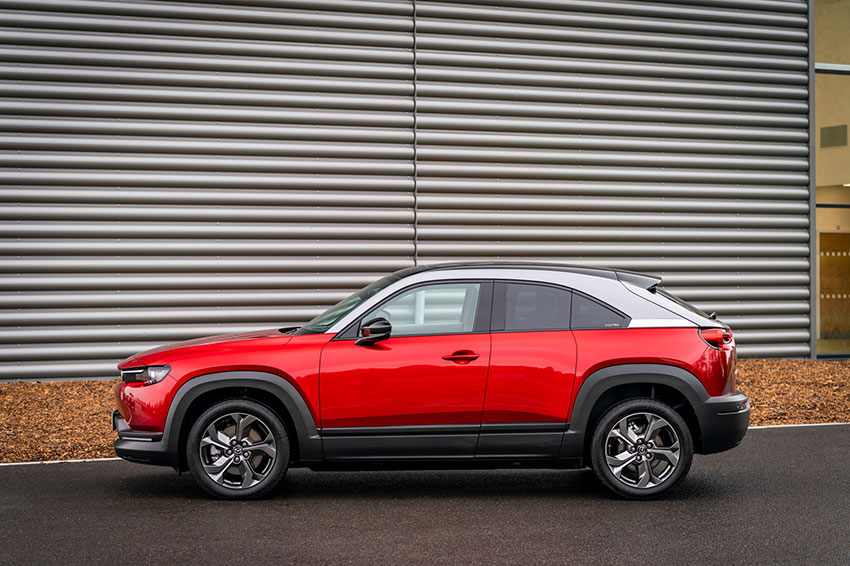 And while the rear side windows may be on the small side, there is an adequate view out and the whole interior has a high-class feel.

Realistically, there is little missing and for a car that is little bigger than a Ford Focus a whole lot has been included with considerable style.

The MX-30 is a car for the modern age – electric, well equipped and packed with panache yet one that handles so sweetly it cannot fail to leave a smile on your face.