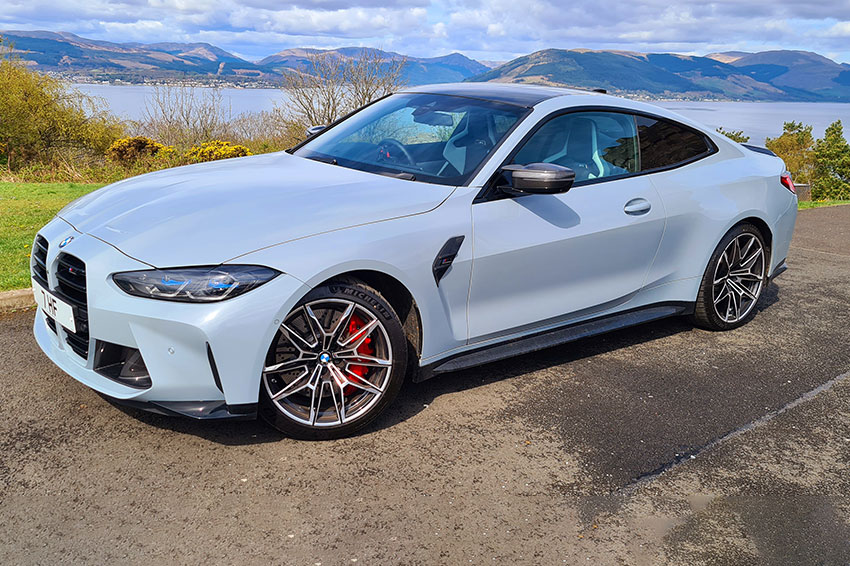 Ever since the BMW M4 Coupé was launched in 2014, it has been hot property – not only for complementing its older sibling, the M3, but for also giving its rivals a run for their money. Fast forward to 2021 and BMW have unleashed their latest incarnation – the new M4 Competition.

BMW knows its customers well, especially given its history when it comes to performance cars.

Styling is important – particularly when it comes to a Coupé – and the new two-door M4 Competition is no different. With its sleek lines, sporty presence and performance-esque design, the new Coupé is most definitely a crowd-pleaser. While out test-driving, several members of the public remarked on its good looks, which leads on nicely to the new elongated front kidney grilles. I have to be honest and say, that in the flesh, they work well and give the car a distinctive look, with a slight sense of motorsport prowess thrown in for good measure. Between the sleek styling and powertrain growl (more on that later), it certainly turned heads.

According to the Head of BMW Group Design, "The emotionally charged design is rigorously function-driven, pure-bred and stripped back without compromise".

The aerodynamic styling conveys its motorsport-inspired pedigree while being slightly longer and wider than its predecessor. Alongside the M grille, there are traditional M gills integrated into the front panels, additional cooling intakes, Shadowline LED headlights (adaptive headlights with BMW Laserlight are optional) and a stylish, eye-catching carbon fibre roof. The optional M Carbon Pack helps spruce up the exterior, with carbon on the front intakes, wing mirrors, rear spoiler and rear diffuser, which exudes sports appeal as it houses the twin exhaust systems.

There's over a dozen wheels to choose from – most notably when it comes to the differentiation of the tyres – with the front wheels being 19-inch and the rear being 20-inch. Michelin Pilot Sports 4S tyres come as standard. There are also 100 paint choices on offer, three unique brake calliper colours and optional M Carbon ceramic brakes.

Under the bonnet you'll find a racing-inspired smooth 3.0-litre, twin turbo, straight-six powertrain, producing 510bhp which delivers 650Nm of torque; an increase from its predecessor. The engine set-up distributes excellent power to the rear wheels, with CO2 emissions at 230g/km. Combined with the Active M differential and other new track-inspired technologies, the new M4 goes from 0-62mph in 3.9seconds. Top speed is limited to 155mph but an optional M Drivers Pack increases it to 180mph. Then there's the sound; the sound a sports performance Coupé should make. The BMW motorsport influence is clear for all to hear!

BMW claim you'll get around 28mpg. However, thanks to the refined turbo engine, you're more likely to achieve more than this. Case in point – driving in town at 30mph, I was reaching 34-35mpg. Put your foot down and you'll likely see mpg dip to the low 20s.

The six-speed manual of old is gone, replaced with a new eight-speed ZF automatic transmission which is very responsive, and offers quick shifts with no lag whether controlled by the steering wheel mounted paddleshifts or gearstick. The engine itself has also embraced modern technology by utilising a 3D-printed cylinder head.

It's no secret that the old M4 could be a bit of a handful. Thankfully though, the new M4 has grown up, and trust me, one day when I was putting the Coupé through its paces, there was a deluge of rain, yet the car held the road impeccably, with traction control on (by default) and then switched off. Given the amount of power going to the rear wheels, the traction was impressive. So, it begs the question; is there really a requirement for the upcoming M xDrive version later this year?

The second generation M4 Competition has certainly come of age. Road holding is terrific, with no bodyroll and, thanks to excellent dampening and new acoustic windows, there's next to no noise – other than the tyres. Despite weighing in at 1.7 tonnes, it doesn't feel like a heavy car to drive, and boy, can it shift! BMW say the additional weight improves safety and emissions.

The precision and response give you an instant sense of confidence behind the wheel. There are two settings for the steering and brakes; ‘Comfort’, for everyday use, and ‘Sport’, for when you want to open it up. Coupés aren't always the most practical of cars, however, the new M4 feels far more useable for everyday life than its predecessor.

There's a 'set-up' button, which allows you to configure brake pedal feel, steering wheel and powertrain. The centre console houses the ‘M Mode’ button, allowing you to switch between ‘Road’, ‘Sport’ and ‘Track’, by adjusting responses and characteristics, such as the digital instrument cluster and heads-up display. 'Road' keeps all standard and driver assistance systems fully activated, 'Sport' allows the driver to configure their own settings and 'Track' is developed exclusively for driving on a racing circuit by deactivating all the comfort and safety functions.

I have no doubt that, if this car is unleashed on the track, it will be magnificent. It's like the Clark Kent of cars: by day, it's an everyday, useable car; at weekends, it's partaking in Fast and Furious-style drifting to its heart's content. 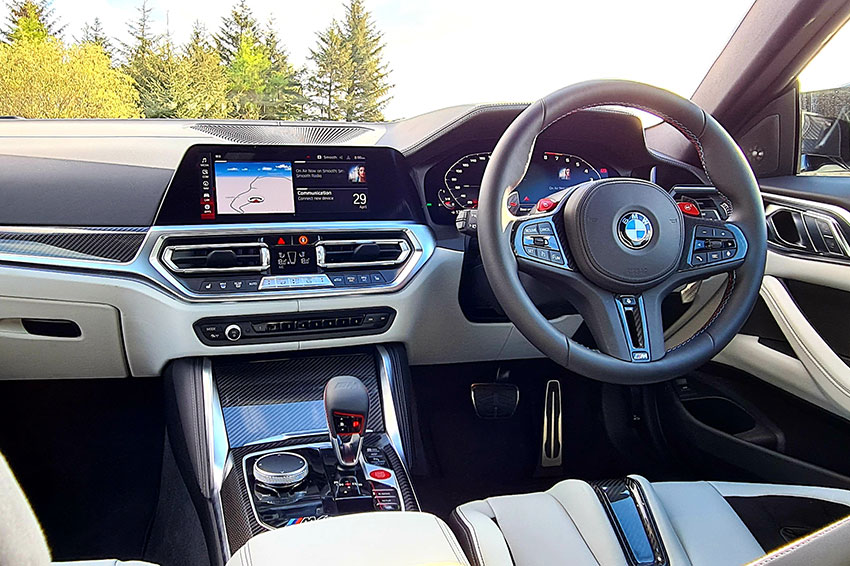 The fully digital M4 Competition display has a high-resolution 12.3-inch instrument screen behind the steering wheel and a main 10.25-inch central control display screen. Touch screen and old-fashioned buttons make for a pleasant mix throughout the cabin.

The standard electronically adjustable leather seats are comfortable, though, optional carbon bucket seats, which are still agreeable, might be slightly confining for taller drivers. The rear space is surprisingly comfortable and spacious. At 6'2ft, I fitted in with ease, though head room is a little restrictive. There are two seats in the rear, with air con and USB ports, and the rear seats fold down allowing access to the 440 litres of boot space.

There are swathes of kit as standard, including automatic climate control, configurable LED interior and ambient lighting, a 16-speaker Harman Kardon sound system, heads-up display and a rear-view camera. All M4 Competitions allocated to the UK come with an interior carbon pack as standard and customers can choose between a variety of optional packages.

A new convertible model is also due out later this year.

The new BMW M4 Competition is a great all-rounder, combining sports performance with everyday use. This grown-up Coupé has made the product line-up that bit more interesting.