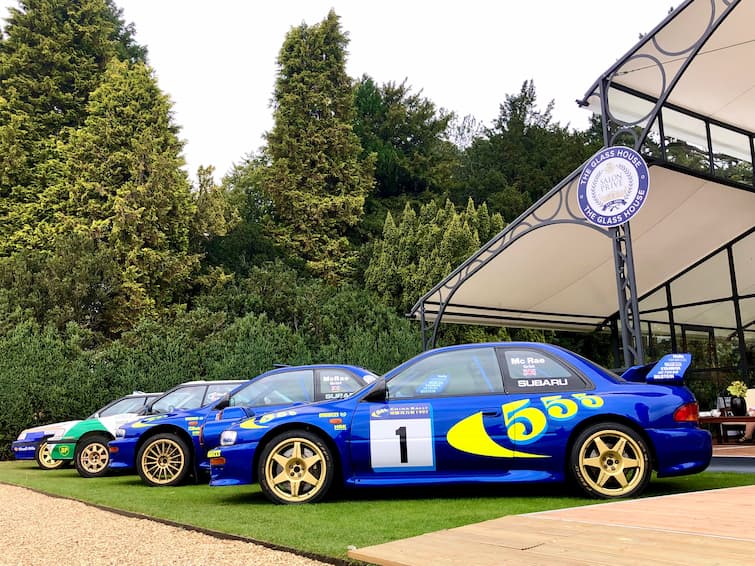 Everyone loves a supercar; they’re the manifestation of coloured pages torn out of magazines and stuck to the bedroom wall as we were growing up. Now of course, we not only have supercars, but 1900bhp hypercars. Combine those with a collection of some of the rarest and most valuable cars in the world, park them on the South Lawn of Blenheim Palace in Oxfordshire, and you have one of the automotive highlights of the year, Salon Privé.

And to mark the 16th consecutive event, not only did the day include model debuts from some of the world’s leading manufacturers, and Scot Colin McRae’s iconic Subaru Impreza World Rally Cars, but the organisers unveiled a unique gathering of iconic models under the veil of ‘The Red Collection’. More on that later.

Next up, and raising the price tag significantly, McLaren, which took the opportunity to unveil three new models; the windscreen variant of the company’s open-top Elva, the Artura and the 765LT Spider. The Artura is a high-performance hybrid supercar powered by a twin-turbo 3.0 litre V6 assisted by a compact 95PS axial flux E-motor.

The 765LT Spider meanwhile — with its carbon fibre chassis, and the company’s latest Longtail following last year’s fully-sold-out 765LT Coupé — has an electrically operated one-piece retractable hard top that lowers in just 11 seconds. With 765PS on tap, it covers 0-124mph in 7.2 seconds and has a top speed of 205mph. 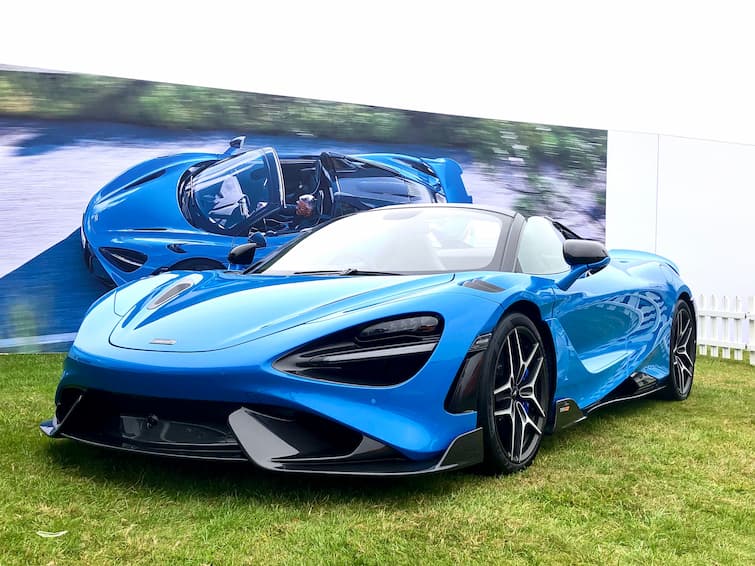 And while Land Rover gave a global debut to its Range Rover Sport SVR Ultimate Edition, boasting exclusive colour combinations and detailing, it was the new supercars and hypercars which really grabbed the attention.

Italian coachbuilder Touring Superleggera marked its 95th anniversary with the Arese RH95, a mid-engined, carbon fibre-bodied supercar with a 710bhp Ferrari V8. The Turin carmaker’s first mid-engined model, it has a claimed 0-62mph time of 3.0sec and a top speed of 211mph.

Price? Well, I guess in this instance it’s a case of “if you need to ask, you can’t afford it”. Touring plans to make just 18 Areses, and buyers can supply their own donor car. Each takes six months to complete.

My personal fave though was from another luxury Italian carmaker, this time Automobilia Pininfarina. Making its UK debut, the Battista Anniversario is a 1873bhp all-electric hypercar and is the most powerful road-legal car ever to come out of Italy.

Power is sent to all four 21-inch aluminium wheels and the performance is eye-watering. How about 0-62mph in under 2secs; 0-186mph in under 12secs, and a top speed of 217mph.

Price? Just €2.6 million. But there’s one BIG problem. Just five will be built … and they’ve all been sold.

However, if you really need an all-electric hypercar, there was more to choose from. Seen for the first time in the UK, the Automobili Estrema Fulminea is the first car in the world to use an innovative ‘hybrid’ battery pack combining Li-ion cells with solid-state electrolyte and ultracapacitors.

It was joined on the lawn by the fully electric Hispano-Suiza Carmen. Designed, developed and built in Barcelona, the Carmen marks a return to car production for one of the oldest and most prestigious names in automotive history. 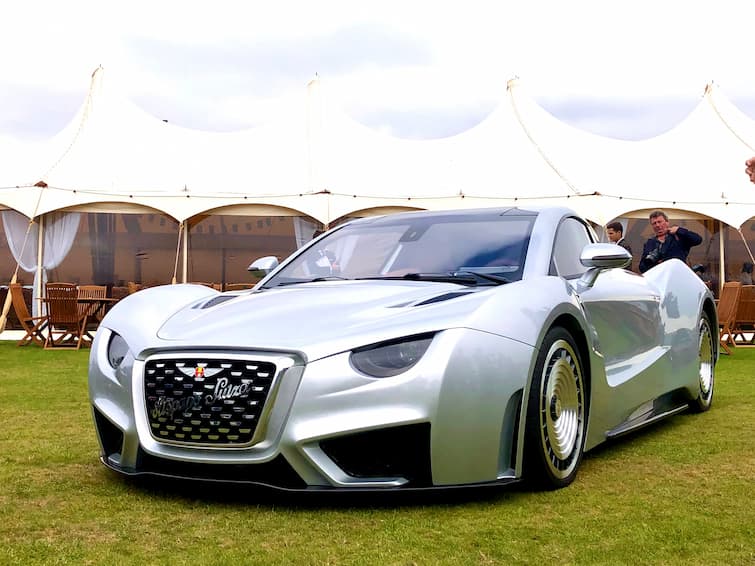 Based on a fully restored and redefined Porsche 911 964, it can deliver an emission-free driving range of more than 180 miles and covers 0-62mph in under 4 seconds. The EV powertrain, which has its power delivery optimised specifically for the Gulf Signature Edition, is coupled to a 53kWh battery pack and advanced battery management system.

Sending 500bhp to the rear wheels, the new Porsche Gulf Signature Edition has more than double the power output of an original 1990s Porsche 964.

But while some Porsche aficionados were left scratching their heads in quiet disbelief that someone had created an all-electric wide-bodied 964, they consoled themselves by visiting The Red Collection which included a lovely Porsche 904 Carrera GTS.

Bought new in April 1964 by Swiss entrepreneur and racing team patron Georges Filipinettii (correct, Filipinettii), it has a well-documented competition history, including the 1000kms at the Nürburgring and the Le Mans 24-Hours.

It’s difficult to put a value on the 12 cars in The Red Collection — which were actually showcased on the Duke of Marlborough’s hallowed cricket pitch, complete with markings, on the South Lawn — but suffice to say they’ll be worth tens of millions of pounds. 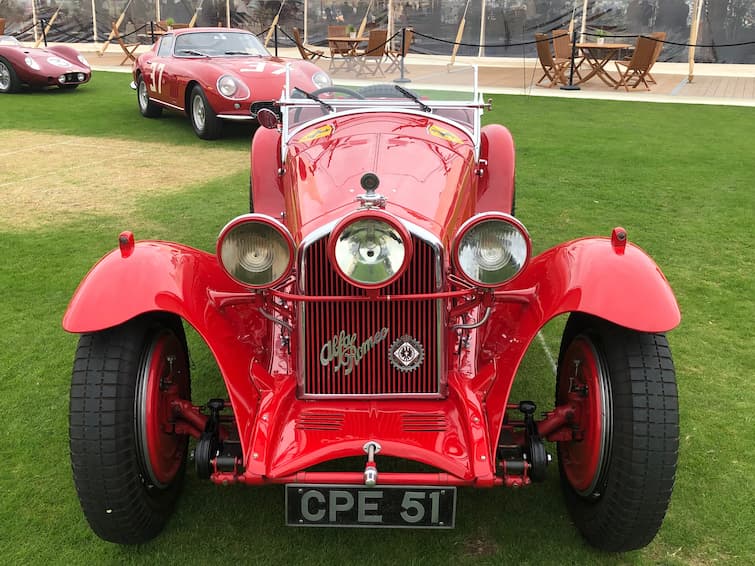 In addition to the 904 Carrera GTS, there was also a 1949 Mille Miglia-winning Ferrari 166 MM; a Scuderia Ferrari-registered Alfa Romeo 8C 2300 Monza Spider by Zagato; a McLaren F1; a Pagani Hurray Roadster; one of only 10 factory Ferrari 275 GTB Clienti Competitizione, this one being only one of three right-hand drive models; a Mercedes 300 SL Coupe Gullwing; a Ferrari F40 and … a Ferrari 250 GTO.

The achievement by the organisers, led by David and Andrew Bagley, to curate such a gathering of positively mind-blowing motors to appear in one place should be applauded. It gave spectators a unique opportunity to get up close and personal with rare, priceless models which normally would be shielded by significantly-sized security guards.

There is something exceptionally special about Salon Privé. It allows a glimpse into the rarefied existence of the men and women who not only own, but drive these blindingly expensive cars.

Look closely through the car windows, and you see dusters and cloths used to polish the already gleaming metal. The owners fire the cars’ engines up, pop the bonnet and tinker away to their hearts’ content to ensure they run with the same smoothness as when they left the factory.

It’s a wonderful world … and one we all must strive to ensure continues as the 2030 deadline — halting the UK sales of new internal combustion engine vehicles — looms ever closer. 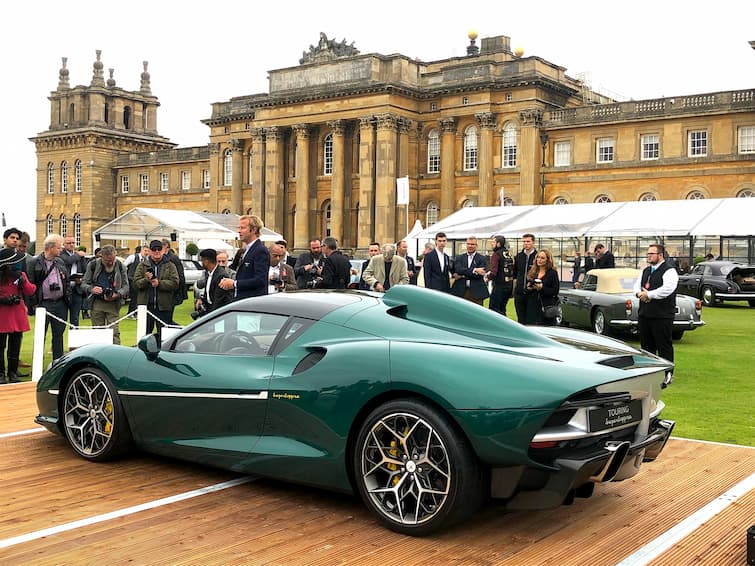 All pictures by Jim McGill.