Turning on the style: read all about Mazda's newest version of a favourite family hatchback. 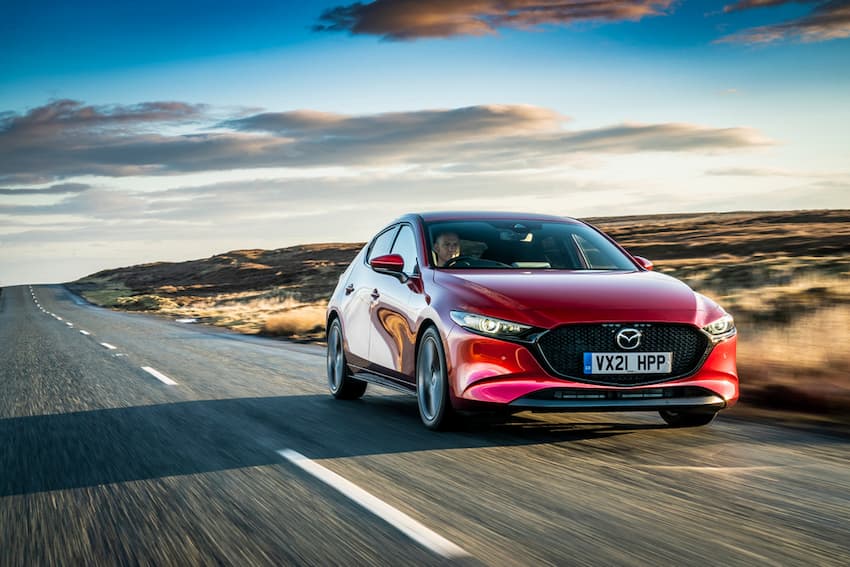 The fourth-generation Mazda 3 has been around for a couple of years now, but it’s back in mild-hybrid form. Tim Barnes-Clay took one for a test drive to find out if it’s any good.

Let’s face it. Mazda 3s of old always looked a tad weird. But those days are over. The latest Mazda 3 now has a far better appearance, with well defined, purposeful looks. 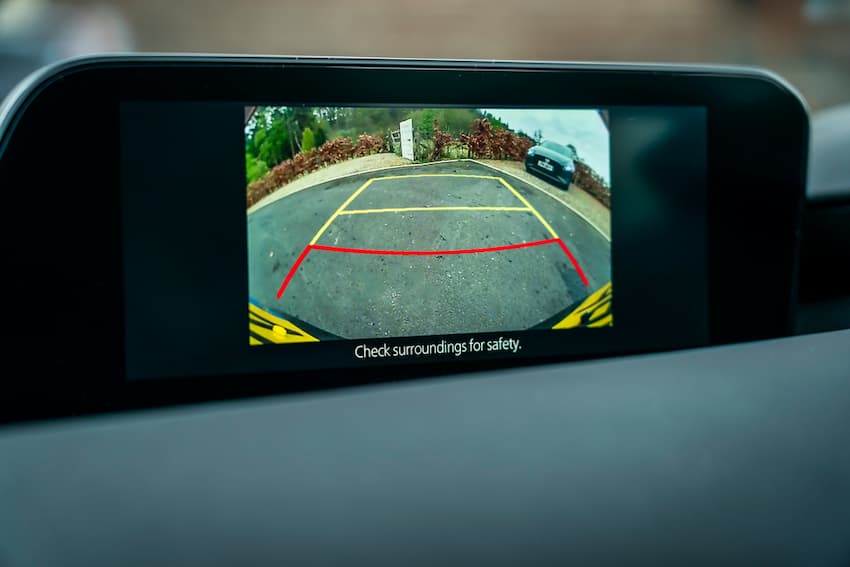 In terms of power, there are four options to choose from. There are two engines, both of which are four-cylinder 2.0-litre petrols. The E-SkyActiv G produces 122PS, while the new E-SkyActiv X produces 186PS – and both are available with six speeds in either manual or automatic.

This being Mazda, though, if you pick lower trims, you can't always select the gearbox and engine combination you want.

So, if you specifically want the 186PS powerplant and automatic transmission, you need to have the next trim up. 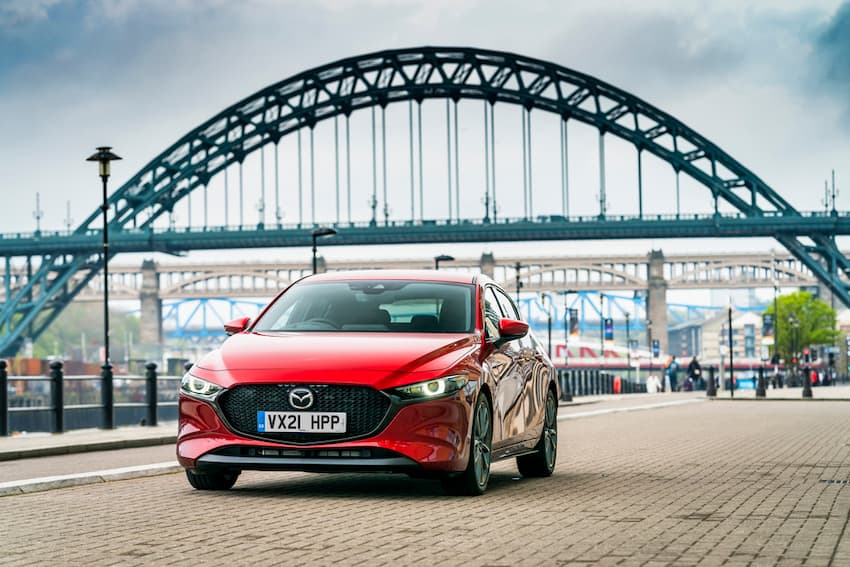 Thankfully, the manual ‘box changes smoothly and the pedals are well-weighted, with consistent performance through the travel of the clutch, brake and accelerator. It stops well, too.

However, even with the extra grunt, the E-SkyActiv X engine isn’t much to write home about in terms of outright performance. Zero to 62mph takes 8.2-seconds, and it tops out at 134mph, which is hardly fast. But it has enough power to ensure you don’t need to keep changing cogs to achieve a response from the accelerator.

It is still definitely the engine to have, as it has a diesel-like economy with more power, while the mild-hybrid feature comes in the form of regenerative braking. This is used to power electrical systems in the car, helping to save fuel. Mazda’s done a fine job with the soundproofing, as road noise is on the quiet side even when putting your foot down.

Thanks to its G-vectoring system, which automatically adjusts your inputs to maximise grip, the Mazda 3 is fun to drive. It can be pushed to the limits around corners, although it will understeer if you get too brave. The steering is light but responsive, and it’s engaging when you push on at higher speeds.

The comfort of the seats is somewhat undone by the 18-inch wheels, which were fitted to my car as an option. It’s a firm ride with a suspension setup that’s on the stiffer side. Therefore, the vehicle will be more suited to those who want something nimble with sporty characteristics. I’d rather have stuck with the standard 16-inch wheels, which are more comfortable. 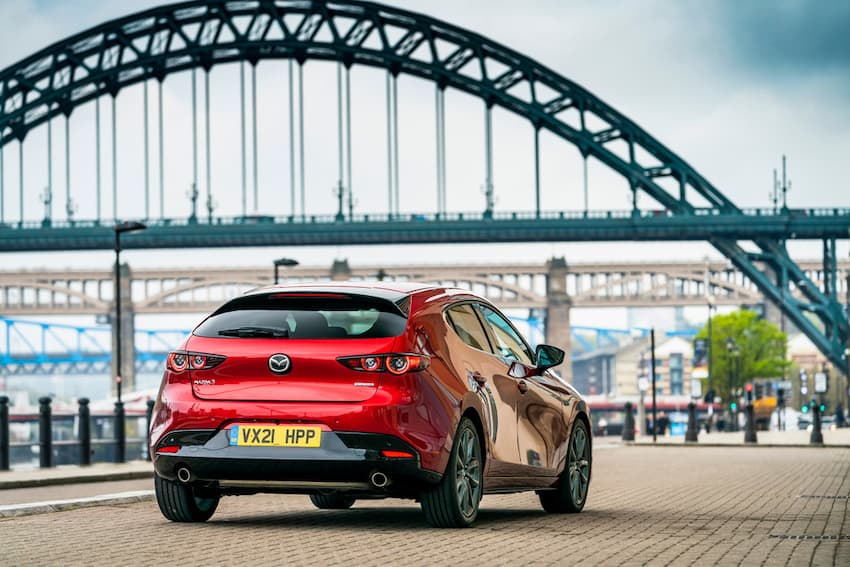 The Japanese car has plenty of personality on the road, though, and it can cruise along in quite a relaxed style. Nevertheless, if you’re buying it for comfort, then you’d better hope the roads you’re driving on are in good nick.

Inside, the Mazda 3’s dashboard is nicely laid out in a two-tiered design, with the infotainment screen sprouting up in the centre. The only issue is that, because the two tiers work their way around the 8.8-inch infotainment screen, they leave a lot of space for quite a small screen, so why not make it bigger?

The screen isn’t touch-sensitive and is instead operated by buttons on the steering wheel and a rotary knob on the centre console.

The two-tiered design of the dashboard even makes its way around onto the doors, giving it something of a futuristic appearance. Furthermore, there’s soft-touch synthetic leather just about everywhere, minimising the cheap, hard plastics.

A few bits of silver trim add a bit of variance, but I wish there was more to break up the predominantly dark detailing in the cabin.

There’s a decent amount of space in the front, with plenty of headroom. However, taller passengers will struggle in the back, as the bottoms of the front seats are close to the floor. This means you can’t get any part of your legs underneath them when sat in the back, so you sit scrunched up instead. The sloping roofline means headroom is at a premium, too. The enormous rear pillars and small windows make you feel a bit hemmed in.

Boot space is decent at 351 litres, sitting between a Ford Focus (341 litres) and a Volkswagen Golf (380 litres). This expands to 1026 litres with the rear seats down, which fold away in a 60/40 configuration.

When it comes to running costs, the E-SkyActiv G produces 50.4mpg and 127g/km CO2 with the manual. On the other hand, 46.3mpg and 140g/km CO2 are achievable with the automatic.

But these figures are exceeded by the new E-SkyActiv X, which manages 53.3mpg and 121g/km CO2 as a manual, and 47.1mpg and 137g/km CO2 as an automatic. This truly is diesel performance in a petrol engine, and it’s hard to see why you’d pick the G over the X, given the extra 64PS on offer. 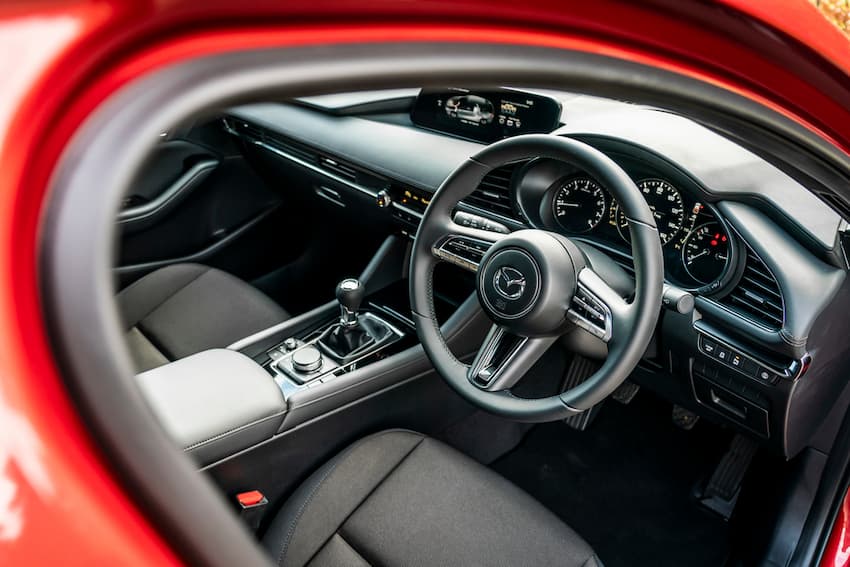 Regarding reliability, Mazdas are renowned for their build quality and dependability, enjoying a solid reputation with both for many years and frequently coming towards the top in owner satisfaction surveys. In addition, all Mazdas come with a three-year, 60,000-mile warranty for added peace of mind. You can consider yourself unlucky if you need to make use of it, though.

Safety-wise, the Mazda 3 was tested in 2019 by Euro NCAP, earning a full five-star rating and scoring a whopping 98% for adult occupants. It’s rated at 87% for child occupants, but it only scored 73% for safety assists. This is because many of the best safety features only come as standard on the range-topping trim.

GT Sport Tech includes a cross-traffic alert system, which will warn you if you're about to pull out into the path of an oncoming vehicle. In addition, smart city braking will automatically apply the brakes if it detects an imminent collision when reversing. At the same time, driver attention monitoring will alert you if it thinks you’re not focused on the road.

In summary, the up-to-date Mazda 3 is a much-improved car, combining a decent interior with better looks and more fun behind the wheel. It still has its quirks, though – it's not the most practical car, and it’s a pity there isn’t more safety kit as standard lower down the range. However, there’s still a generous amount of equipment on offer.

If you decide on a Mazda 3, my test car – the SE L Lux trim – is the one to go for, as it’s very well-equipped and, when selected along with the higher-powered engine, is the optimum combination in my opinion. Unless you want an automatic, of course. 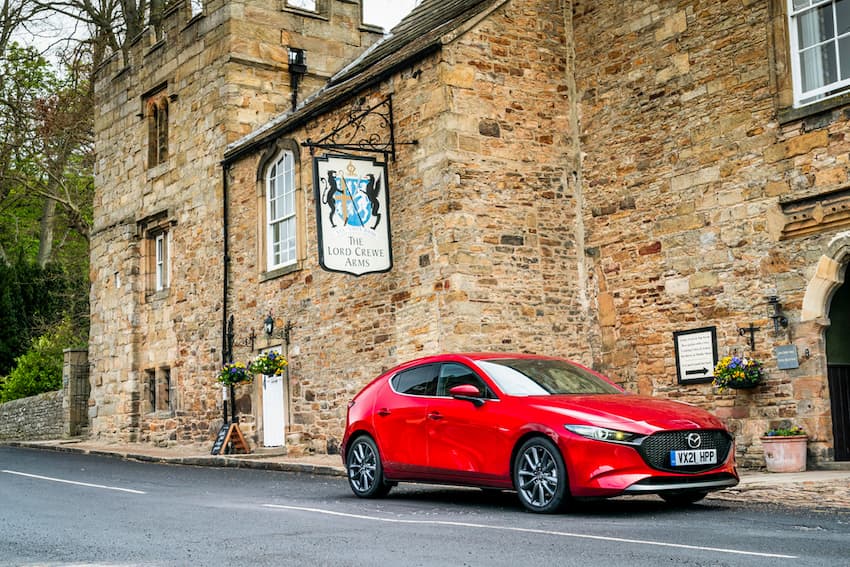