The cars of the James Bond franchise

From the iconic Aston Martin to the underwater Lotus Espirit, we take a look at 007’s driving history. 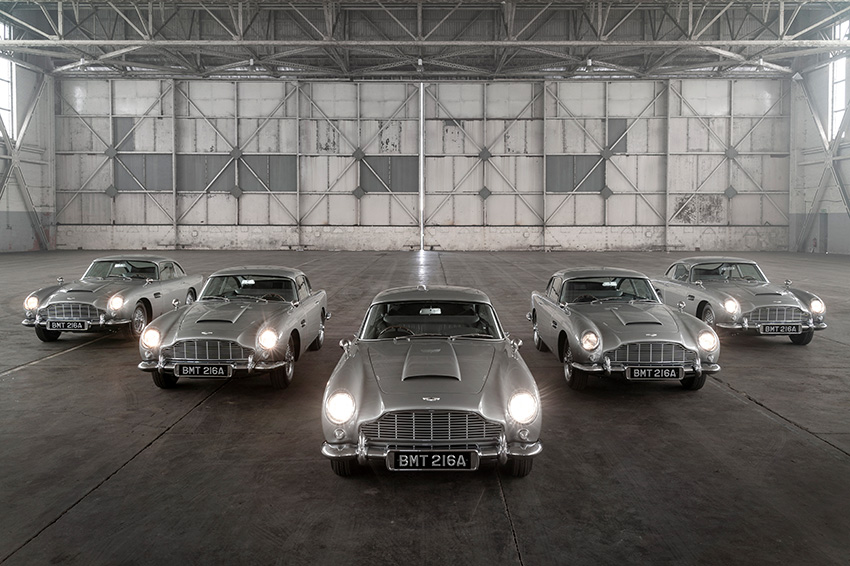 The Aston Martin DB5 will forever be associated with 007.

It's been nearly sixty years since Sean Connery graced our screens as James Bond in Dr. No, and twenty-four official films and six actors later, the 007 series remains one of the most popular franchises in cinema history.

With spectacular stunts, exotic locations, nefarious villains and memorable theme tunes, Her Majesty's favourite secret agent is back in the long-awaited twenty-fifth blockbuster No Time To Die.

Synonymous with 007's licence to thrill are his cars. Over the years, there's been a desirable selection; from iconic Aston Martins to a Lotus submersible. Whether they're driven, borrowed or chased ¬¬– the cars don't go unnoticed.

It all started in 1962 with Dr. No, where cars initially played a rather auspicious role. Despite 007 favouring a Bentley in the books, the very first car to make Bond history on screen was a Sunbeam Alpine Series II. The 1.6-litre, 80bhp cabriolet, driven by Sean Connery, was used in a chase scene, with Bond outwitting armed assassins on Jamaica's mountain roads. In reality, the car was actually borrowed from a local resident, as it was the sportiest car producers could find.

It wasn't until 1964's Goldfinger that Bond cars came into their own. It's a little-known fact that producers turned to Aston Martin who agreed to lend them a DB4 Series V Vantage prototype, which in turn, lead to the most famous car in the world being born – the iconic DB5.

The stylish 4.0-litre, 282bhp DB5 matched Bond's glamorous lifestyle and featured an array of gadgets from Q including; front-wing mounted machine guns, revolving plates, a bulletproof shield, tyre slashers, tracking system and ejector seat. Due to its popularity, the car featured in numerous films, including 1965's Thunderball – where a water cannon was added to its arsenal. 1995's GoldenEye saw it involved in a Monte Carlo mountain race, in 1997's Tomorrow Never Dies it's driven briefly, Bond then wins the car in a poker match in 2006's Casino Royale, the DB5 blows up in 2012's Skyfall, but the final scenes in 2015's Spectre show it restored. Now, it's back in action, being chased through the Italian countryside in No Time To Die.

In 1967's You Only Live Twice, Bond makes his escape in a unique Toyota 2000 GT. Unique, in that the car didn't exist until filming. Due to Sean Connery's height, he was too big for the original coupé, so producers modified it into a convertible. The 2.0-litre straight six is rare, as only 337 were built.

1969's On Her Majesty's Secret Service, saw Aston Martin return, albeit briefly, with Bond behind the wheel of a DBS. He is however, a passenger in Diana Rigg's 335bhp V8 Ford Mercury Cougar XR7, which escapes henchman before ramming its way through a well-staged stockcar race.

The 7-litre V8 Ford Mustang Mach 1 makes a memorable appearance in 1971's Diamonds Are Forever, where Bond outmanoeuvres authorities on the streets of Las Vegas, culminating in a daring stunt which required the car to go on two-wheels.

Bond gets behind the wheel of an AMC Hornet in 1974's The Man With The Golden Gun. The 6.0-litre V8 is famous for performing a world record, 360-degree barrel roll over a bridge. The car was fitted with a widened chassis and centralised steering. Only one take was required to capture the stunt.

Producers returned to a British manufacturer from the mid-70s, and choose the striking Lotus Esprit S1 for 1977's The Spy Who Loved Me. Rivalling the Aston Martin DB5 in icon status and pedigree, the Lotus quickly became a global hit. The amphibious mid-engined 2.0-litre, 160bhp Esprit skilfully outruns armed assassins and helicopter, before plunging into the sea and becoming a submersible. The Esprit's gadgets include torpedoes, mines and missiles.

1981's For Your Eyes Only sees Bond expertly driving a French classic – the Citroën 2CV through the winding mountain roads of Corfu, while outdriving pursuing henchmen. The car comes into play after Bond's Lotus Esprit goes up in flames.

A tuk tuk taxi was the unlikely hero in 1983's Octopussy, where Bond and his colleague outsmart chasing henchmen in India with the modified vehicle performed an array of stunts and manoeuvres. Bond also commandeers a 2.5-litre V6 Alfa Romeo GTV6 and a Mercedes-Benz 280S, though the latter ends up being hit by a train after being driven along rail tracks.

Bond finds himself at the wheel of a Renault 11 TXE taxi in 1985's A View To A Kill, as he speeds through the streets of Paris in pursuit of an assassin. Along the banks of the River Seine, the 1.7-litre makes an audacious jump onto a moving bus before having its roof ripped off. It's then sheared in two after colliding with on-coming traffic, with Bond managing to park it up.

Aston Martin reappears in 1987's The Living Daylights with a V8 Volante before being modified into a V8 Vantage coupé by Q. The powerful 5.3-litre is kitted out with a rocket booster, missile launcher, retractable outriggers and lasers, which all come in handy as Bond evades capture on snow and ice.

1995's GoldenEye introduced the BMW Z3 Roadster, though barely used, the stylish 1.8-litre, two-seater looked the part. Although, it was the DB5 that stole the show during an early race with a Ferrari F355.

Seventeen flagship BMW 750iL's were used for the explosive car chase in 1997's Tomorrow Never Dies. Bond controls the gadget-laden 5.4-litre V12 via his mobile phone from the back seat. With built-in tear gas, stinger missiles, re-inflating tyres and cameras, Bond skilfully evades capture before crashing off the roof of a multi-storey carpark.

In 1999's The World Is Not Enough, Bond sparingly utilises a retro-styled BMW Z8 Roadster. The titanium armed 5.0-litre, 400bhp V8 dispenses with a helicopter with side-mounted rockets while engaging remote-drive, before being sliced in half. Only 5,703 models were produced.

The Aston Martin DBS makes a return in 2006's Casino Royale. The 6.0-litre, V12 is put to the test in a high-speed chase which results in the car being destroyed in a memorable scene - as it flips over seven times - a world record. For 2008's Quantum of Solace’s pre-credit sequence, nine DBS's were used in a perilous chase along the banks of Lake Garda, culminating in a quarry finale.

In a rare move, Aston Martin hand-built ten custom DB10's exclusively for 2015's Spectre. The 4.7-litre, V8 predominately appears in a taut chase through the streets of Rome with a one-off Jaguar CX-75 concept, driven by the villain. Bond is able to blast his pursuer with a rear flamethrower, before initiating the ejector seat and parachute, as the car crashes into the Tiber river.

The classic DB5 is one of four Astons making an appearance in No Time To Die, along with the return of the V8 Vantage, a new 5.2-litre, V12, 715bhp DBS Superleggera and the £700,000 217mph Valhalla hypercar. The new Land Rover Defender also appears in an elaborate chase sequence.

So, sit back, relax and enjoy the ride. Bond is back!