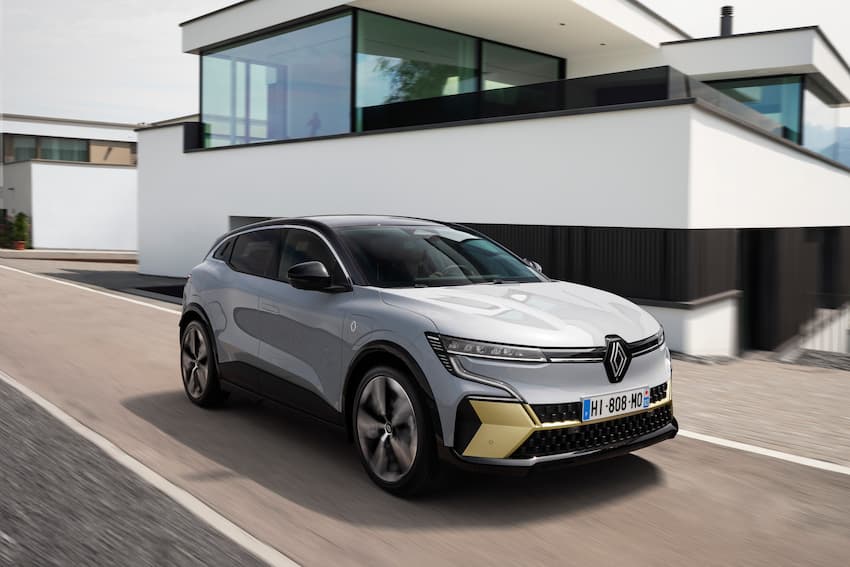 Renault is sure to send shockwaves around Europe with the E-Tech, its new, 100% electric version of the Megane which promises a fully charged range of almost 300 miles.

A suitably suave take on a family favourite, which has appeared in hatchback, sporty estate, saloon and sedan form since its introduction in 1995, the new Megane points to the future of the automotive industry with both its impressive array of as-standard tech and its new-age engine technology.

Likeable from first glance, the Megane has a bright, vibrant, and ultra-modern outer detail, illustrated by a 30-colour combination palette between its main bodywork and contrasting wing mirrors, including stunningly nuanced options such as Rafale grey, Midnight blue, Flame red, Diamond black and the gleaming Glacier white. The front grille is situated low, almost kissing the floor it seems, but the clearance is still there for any anxious drivers about parking kerbside in a time-pressured situation.

The Megane E-Tech’s front and rear lighting, or as Renault calls it, its ‘electrical signature’, is impressive; at both ends there is as-standard full LED headlights which are laser-cut, according to the manufacturer, for added precision, while LED daytime running lights, in a funky pattern slightly resembling a new-age Scandinavian chair, bookends each side. Immediately below the lighting a band of wonderful gold parts the grille, finished on both sides with dynamic looking chevrons.

Around the car, the pleasant surprises continue with the E-Tech’s awesome alloys, 18-inch as standard with an optional 20-inch ones, too - and all turned out in an elegant petalled pattern. 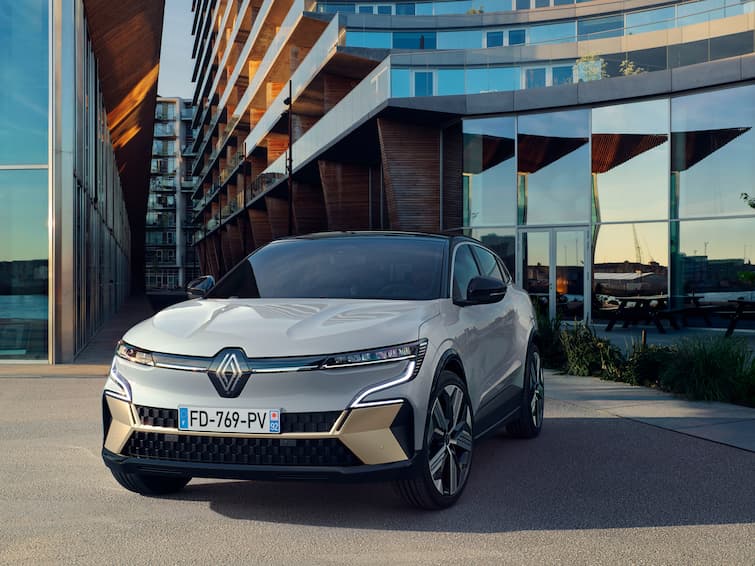 Meanwhile, at the E-Tech’s rear, the LED brake lights glow as a uniform series of almost long exposure streaks, while the seemingly obligatory LED light bar, a regular feature on similar EV releases, gives the car a futuristic look that’s still friendly. Amidst it all, the interlocked diamonds of the Renault badge are central and highly visible, the instantly recognisable logo simplistic and reminiscent of an American sports franchise. Or a certain football team from Sleschwig-Holstein.

What strikes you about the Megane E-Tech’s interior is the step up in ‘cool’ when set against Renaults of old.

The 12-inch portrait central touchscreen with its infotainment system is compatible with both Apple and Android smartphone app pairing, and should you access a well-known search engine’s own sat nav feature, you’ll be awe-struck as the speed and dynamism with which route information is displayed, and how you can zoom in or pan back so easily through the car’s super-responsive touchscreen. Not a trace of drag – that has to be the touchscreen dream.

It’s all part of the manufacturer’s OpenR cockpit tech system, with a 12.3-inch digital instrument display beyond the steering wheel, and the aforementioned portrait infotainment screen (the entry-level E-Tech has a 9-inch multimedia screen in landscape format) which sets the tone for a thoroughly immersive in-cabin experience. 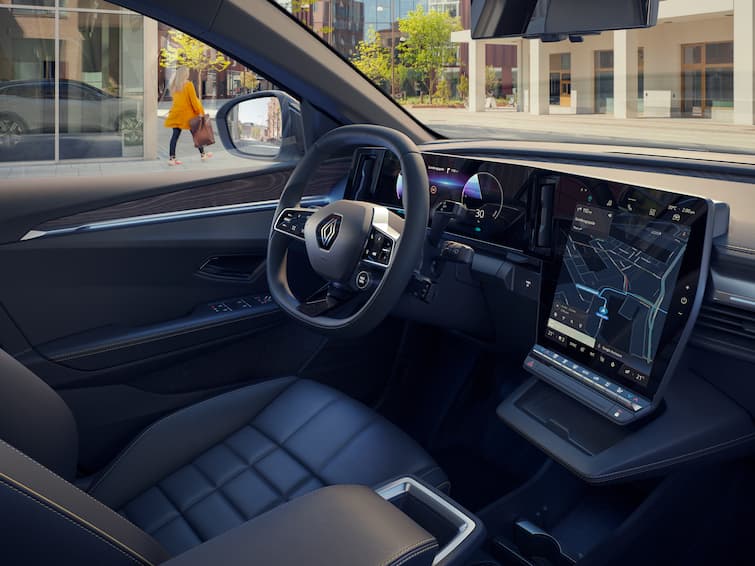 Seating is in cloth as standard, but in options higher up the Megane E-Tech range you’ll enjoy faux-leather, which might sound clinical but in fact has a sumptuous feel, with a soft, rectangular pattern to sink your back into when settling in to a drive.

Around you, you’ll enjoy ambient lighting across the door panels and wireless smartphone charging pad, which gives you, and your cabin crew, a real feeling of immersion with a cascade of colour to scroll through within the central touchscreen. Renault is clearly proud of its 48-colour ambient lighting array, which if left to its own devices will change colour every 30 minutes and runs, apparently, to the human body’s circadian rhythm.

And, if you need the E-Tech’s impressive tech features but in a way that’s a little more analogue, then driving data, media tools, as well as features like cruise control and making calls, are accessible through touch-operated buttons adorning the steering wheel.

In the rear, the excellent quality of seat material continues in soft faux-leather panels, while thanks to the E-Tech’s flat floor, three passengers can be seated while avoiding a fight for foot space.

And as a final progressive touch, the interior is made from 100% recycled materials.

The Megane E-Tech’s 400-plus litre boot is perfect for family road trips or long drives on business - or for fulfilling domestic duties like the weekly grocery shop. It’s refreshing to see a spacious cabin that doesn’t compromise boot space. It’s easy to get luggage and bags in and out thanks to the flat plastic strip over which the boot closes. Meanwhile, if you need additional storage and have only yourself and one other passenger, the E-Tech’s 60-40 folding rear seats give you that extra space in a matter of moments. 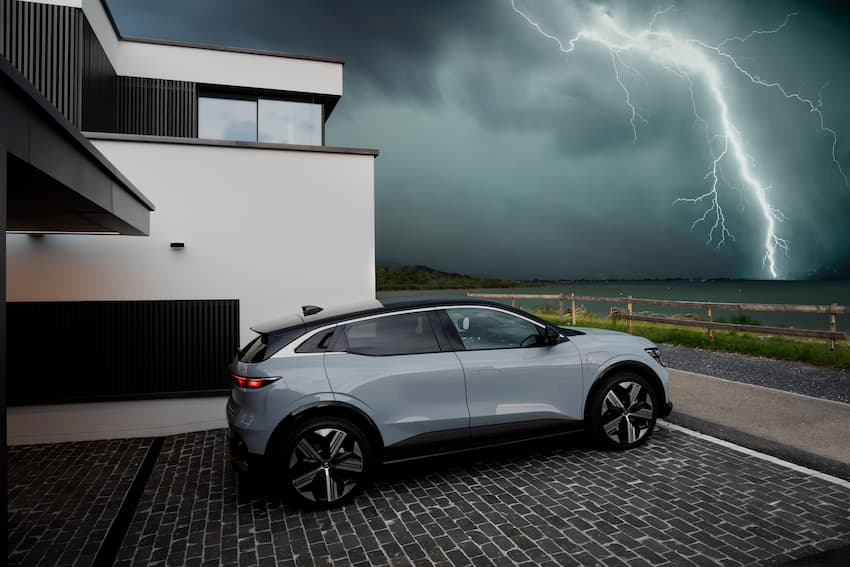 With any EV conversation, the question of range arises – a common source of prospective EV buyer anxiety – but Renault’s family-oriented EV seems to answer that key issue with a top-end, 292-mile range on a full charge. Considering that 80% of UK road journeys made are 20 miles or less, this car, responsibly fuelled, is going to accommodate everything from impromptu trips for a pint of milk to fully-loaded cross-country trips with family or friends.

Charging is done through either a type-2 charging port or a CCS connector, and if you can find the right infrastructure, rapid charging is accessible.

So, can the UK kick its petrol and diesel vehicle dependency? With stellar EV examples like the Renault Megane E-Tech, tailor-made for the far-travelled professional or the holidaying family, the alternatively-fuelled future of the automotive industry looks to be bright. 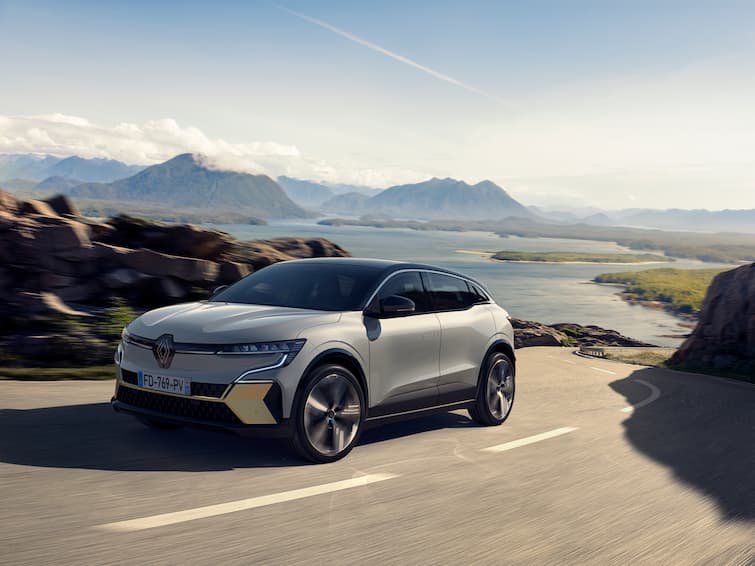