50 years on from its launch, Jim McGill takes a drive in the Mazda RX-3. 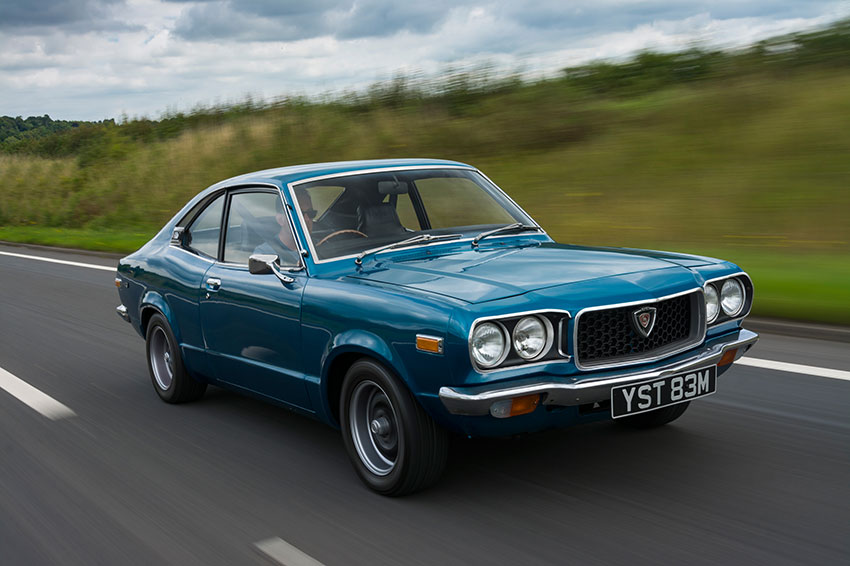 Sometimes you just have to be that wee bit rebellious. We all know the automotive world is moving ever further away from the internal combustion engine as we embrace hybridisation and electrification. So when I got the chance to drive what is essentially a 1970s Q-car, it was a no-brainer. I just had to say ‘yes’.

When you come across the Mazda RX-3 for the first time, it looks just like any other fairly sedate family saloon from the seventies. And it’s small. I’m only 5ft 8in, and standing next to it illustrates the RX-3’s scale. By current car dimensions, it’s bordering on titchy, especially for a family saloon.

But what made the RX-3 special was the addition of a light and powerful rotary engine. That combination was not only appealing to car buyers, but it helped create an on-track giant-slayer as Mazda capitalised on the car’s strengths to go motor racing. The potent weapon took multiple class wins in Japan and Australia, including the iconic Bathurst 1000, as well as regularly beating the contemporary Nissan GT-R.

There’s more than a passing resemblance to the American mini-muscle car about this two-door beauty. Perhaps that should come as no surprise, given the US was a big market for Mazda. Even the big chrome hubcaps scream Americana. 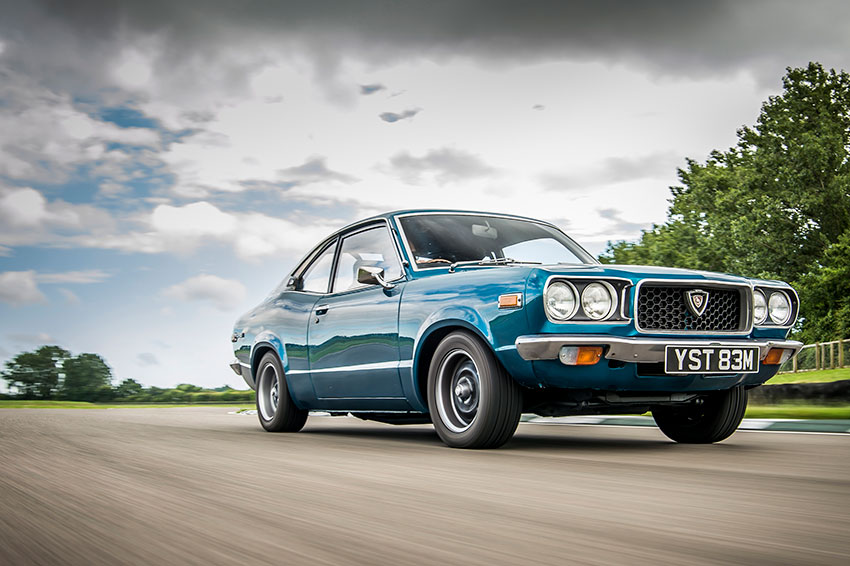 Based on the rather humdrum and conventionally-powered Familia range of saloons, estates and coupés, the RX-3 first appeared in showrooms in 1971. And while the early cars used the same 10A twin-rotor engine as the earlier Mazda Cosmo, albeit detuned to 105bhp, there were changes in 1972.

These changes were crucial to Mazda’s rotary ambitions. From ’72, all rotary blocks were treated to the transplant coating process. This process used sprayed-on steel to improve reliability and ensured the block avoided the weaknesses that killed off the Wankel-engined NSU Ro80.

Fast-forward another 12 months and this 1973 RX-3 model rolled out of the showroom. It’s now a jewel in the Mazda UK heritage fleet. Badged ’Super Deluxe’ — I know, they don’t make them like that anymore, but it’s SO seventies — the heavily vinyl-trimmed interior is perfect for checking out the ‘must have’ options; that’ll be the clock and the heated rear window.

And while the steering wheel looks like wood, it’s not. It’s actually wood-effect plastic, rather than being the real thing. Hey-ho. Behind the wheel, the driver’s eyes are drawn to a comprehensive array of dials which includes a rev counter, crucial for a rotary engine. 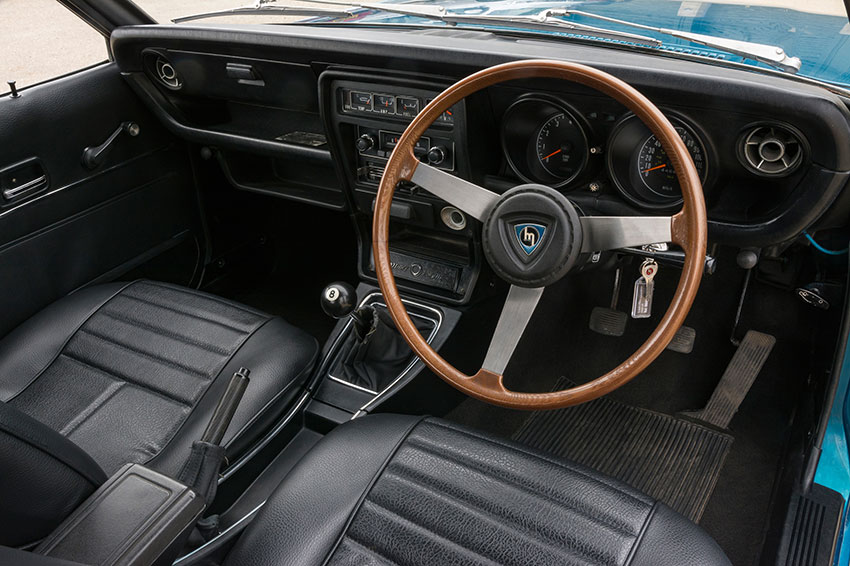 You sit at a comfortable height, which helps boost visibility and is excellent all-round that is boosted by what seems like acres of glass. Inside the cabin, it’s compact. Very neat, but compact. However, that results in a very short distance between my left hand on the steering wheel and the long gearstick, making short, sharp changes a sheer delight.

And there’s a key. A real old-fashioned metal key which slots into a chamber below and to the side of the steering wheel. No keyless ignition here with a simple stab of a button. No sir-eeee!

Pump the throttle a couple of times, turn the key… and we have lift-off. Almost literally. What a noise! Fitted with an aftermarket exhaust, the rotary idles pleasantly loudly, but comfortably on the quiet side of the decibel counter. Blip the throttle of the RX-3 and you’re rewarded with a cacophony of rasps and crackles which bring a smile to the faces of everyone in the vicinity.

It’s mildly raucous and carries that slight whiff of petrol in the air. In so many ways it’s the antithesis of the modern day all-electric, super-quiet car. And it’s simply brilliant. 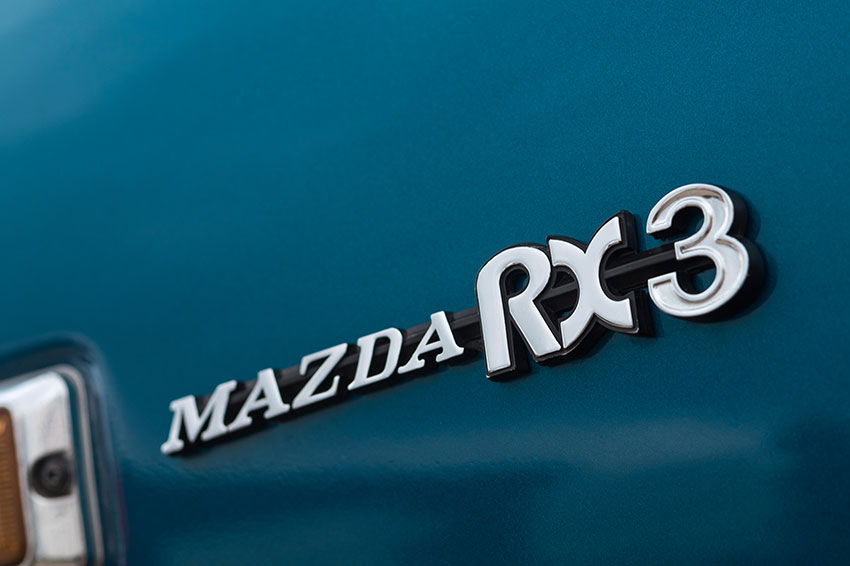 There’s another modification tucked away beneath this car’s bonnet. The standard 10A engine has been replaced by the larger 1146cc 12A found in later models. Not only that, but the factory-spec carb has been ditched in favour of a larger item complete with intake trumpets. I guess if you’re Mazda UK, then you’re going to make damned sure you have the best RX-3 you can. And boy, is it good.

Tipping the scales at just 884kg and with 110bhp, this little Mazda goes hard. It’s certainly no shrinking violet. This is a car that needs to be driven… really driven. There’s no pussy-footing here. You need to show it who’s boss. 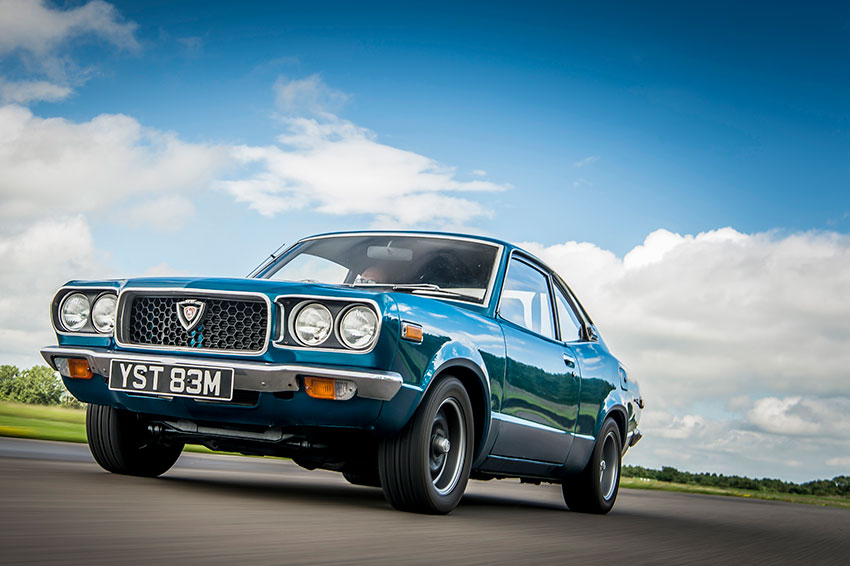 Do that and you’re rewarded with an engine which pulls with real vigour all the way to 7,000rpm. There’s no tingly harshness. Just sheer delight. And did I mention the noise? Oh, lift off quickly and occasionally you’ll be treated to a flame-spitting crack from the over-sized tailpipe.

All this performance is further boosted by the close steering wheel/gearstick geometry I mentioned above which allows you to maximise the delightful five-speed ‘box. And remember, this is a 50-year-old car (yes, I know this one I drove is 48-years-old, but you get my drift). 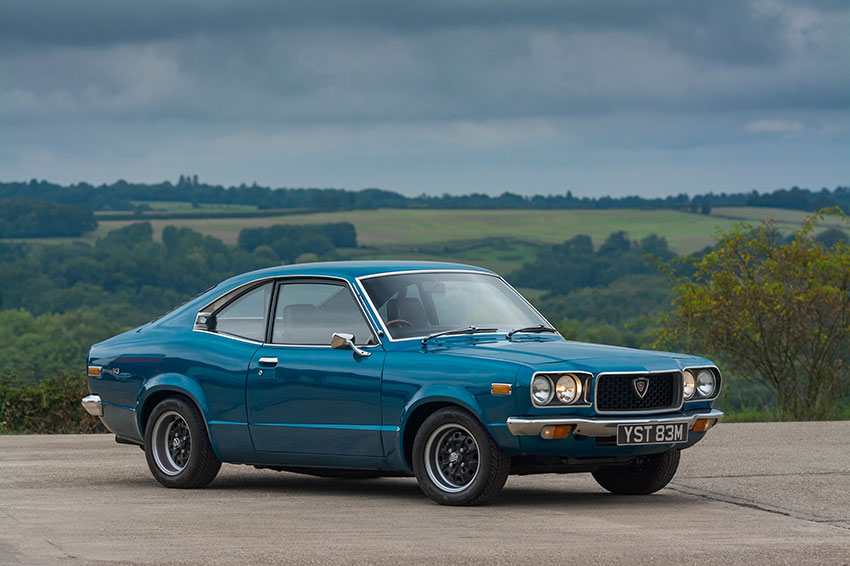 Of course, with that age comes certain areas where you realise how things have improved. The RX-3’s steering is heavy and a tad vague. The car sits on skinny, high-profile tyres which have this rather enjoyable tendency to squirm into squealy understeer, and the leaf-sprung live rear axle hops and bounces over bumps. But that’s what cars did in the early seventies.

It’s more than safe and secure enough. Don’t complain. Adapt your mindset and driving style, and just enjoy it. Before you know it, you’ll again be faced with a long straight and you can get back to enjoying the cacophonous, rev-hungry rotary engine as you head back to the future with a beaming smile on your face. 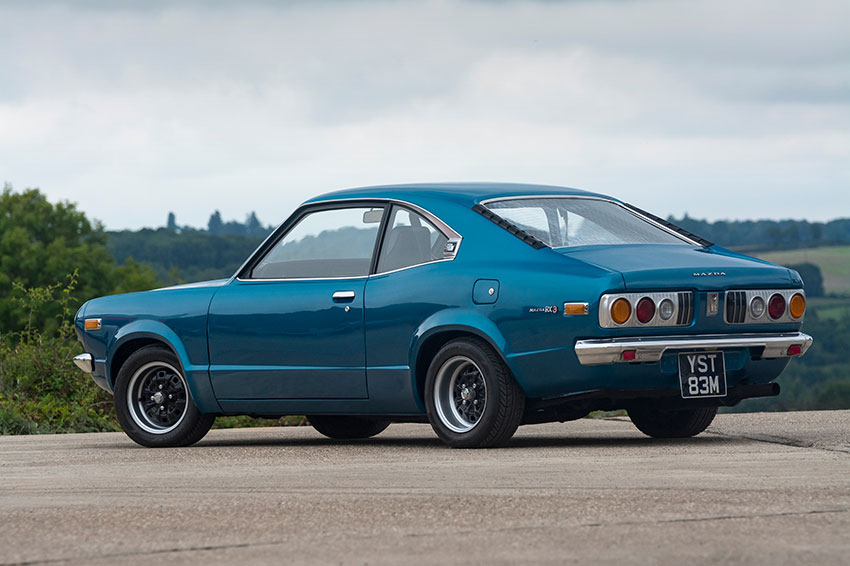