The best city and family electric cars of 2022

Jim McGill looks at the year ahead to discover the new wave of small and family electric cars arriving in showrooms in 2022. 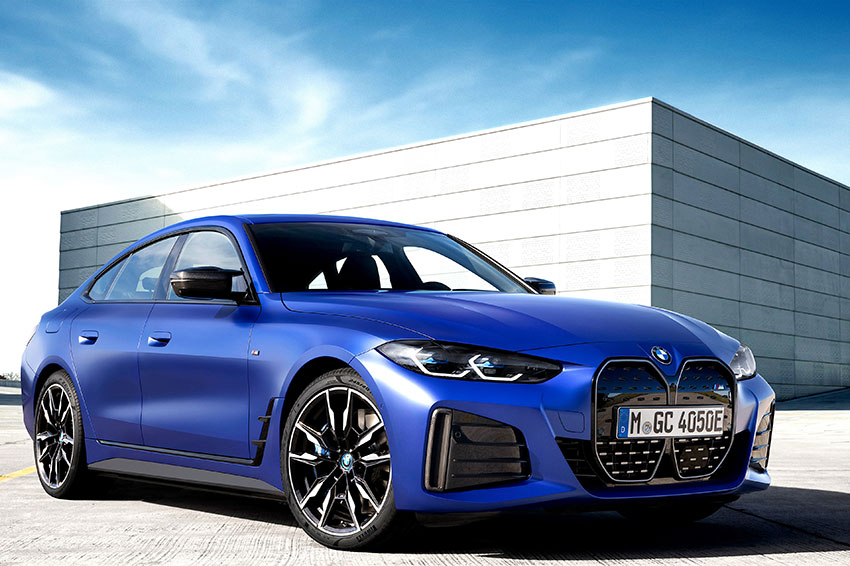 Springing into action: The BMW i4

There’s no getting away from the growth of the electric car market. So, if you’re planning on buying a new car in 2022, you’re in for something of a treat. There’s a huge selection of new models scheduled to arrive in Arnold Clark showrooms across the country in the next 12 months.

Such is the flood of new EVs set to enter our showrooms this year that, in our annual four-part series, the first two sections focus on the manufacturers’ ever-extending range of electric cars. We've split the sections into ‘city and family' and 'SUV and luxury'.

But if you prefer to stick with the good old combustion engine, the final two sections will whet your appetite with what’s coming later in the year.

So, take a deep breath and join us as we highlight, in a four-part series, some of the many new models which will appear in 2022.

Targeting the Tesla Model 3, BMW’s i4 is essentially an all-electric 4 Series Gran Coupé. And that’s no bad thing, especially if you’re someone looking for an electric executive car complete with a large hatchback boot space.

With a maximum range of up to 367 miles, and a whopping 536bhp in the range-topping i4 M50, there’s a lot to attract attention. Perhaps even more so with the 335bhp eDrive40 version which will also be available from launch. Buyers, of course, will need to be confident enough to drive the car with that big, divisive front grille.

BMW will return to the bread-and-butter EV market when it unveils its new iX1 which, it’ll come as no surprise, will be an electric version of the X1.

The new all-electric crossover will go head-to-head with the likes of the Mercedes EQA and Volvo XC40 P8 Recharge. BMW has yet to release official technical details, but given the X1’s underpinnings are shared with the existing MINI Hatch range, it’s likely to use the MINI Electric’s 181bhp motor and 32.6kWh battery pack.

What’s also likely is the iX1 will include BMW’s more powerful 282bhp electric motor and 80kWh battery pack. This would give it a range of around 270 miles and pitch it directly in competition with the Volvo. 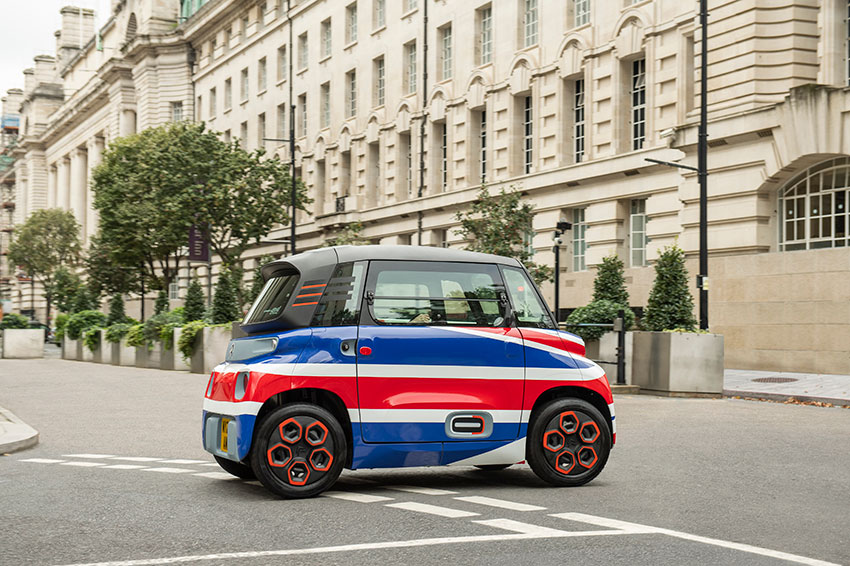 Ok, officially and technically the Ami isn’t a car: it falls into the category of electric quadricycle. But hey, it’s got a roof, two doors, a hatch, and two seats.

Top speed is restricted to just 28mph and the official range is 46 miles from its 8bhp electric motor. But the price is attractive: just £6,000. That makes it an ultra-cheap entry-point into EV-ownership and has the potential to become the perfect city centre ‘shopping trolley’.

It’s expected most people will drive the Ami under a hire scheme – pay a deposit and then weekly short-term rental payments. Oh! And it can only be charged using a domestic three-pin plug; you can’t use the usual public charging network. 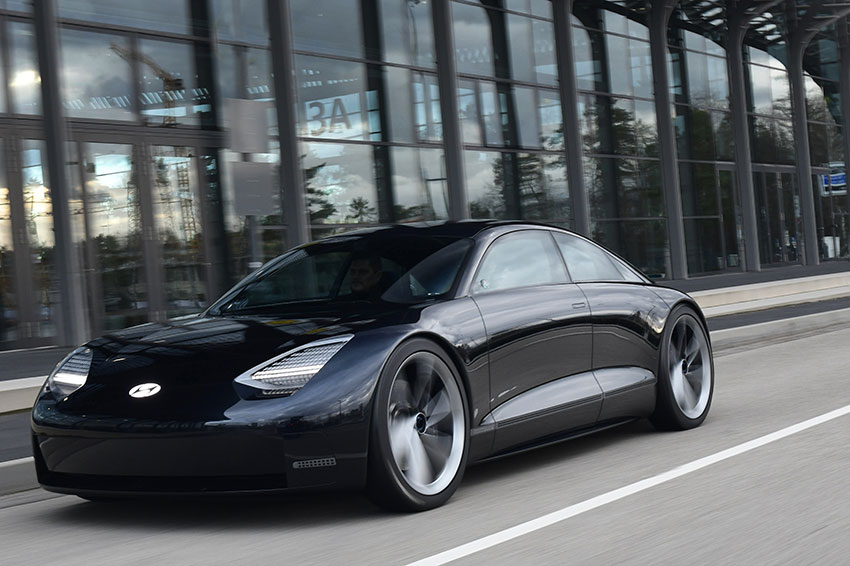 Hyundai has already garnered loads of attention in the EV marketplace with its futuristic IONIQ 5. That attention will take a further quantum leap when the futuristic, sleek IONIQ 6 – first seen as the Prophecy Concept (pictured) – arrives in the summer.

The all-new four-door coupé gets the 77kWh battery pack – already successfully used in the closely-related Kia EV6 ¬– which should deliver up to 330 miles. That’s more than the equivalent Tesla Model 3.

It’s likely the entry-level IONIQ 6 will be powered by a single motor delivering 226bhp to the rear wheels. Above it will sit a four-wheel drive dual-motor 321bhp version. There will also be a barnstorming IONIQ 6 N… which is expected to have 577bhp on tap.

Like the IONIQ 5, the IONIQ 6 will have the same fast-charging capability, meaning 10-80% of its capacity in around 18 minutes… if you can find a fast-enough public charger.

Inside, expect many of the IONIQ 5’s looks and styling to be carried over. There will be two 12.3-inch screens which will handle instruments and infotainment. Thankfully, a range of buttons located below the screens will take you to the most commonly used features, including sat nav and climate control. 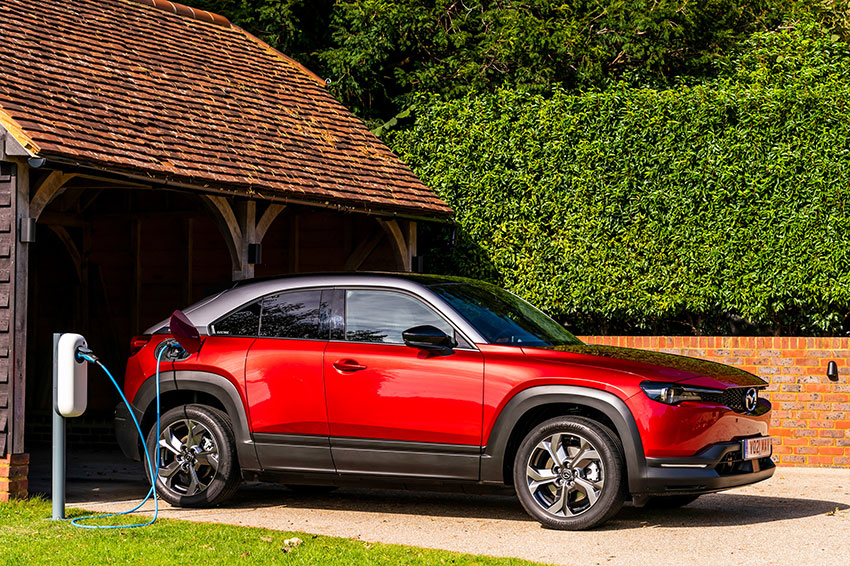 Mazda’s quirky all-electric MX-30 crossover will be further supplemented by the addition of the long-awaited range extender version. No specific details on battery pack and range have yet been released, but what we do know is it will use a new rotary petrol engine as a range extender, increasing the distance possible between charges.

That’s sure to make the MX-30 an even more attractive proposition, given its current all-electric range is only 124 miles, officially. 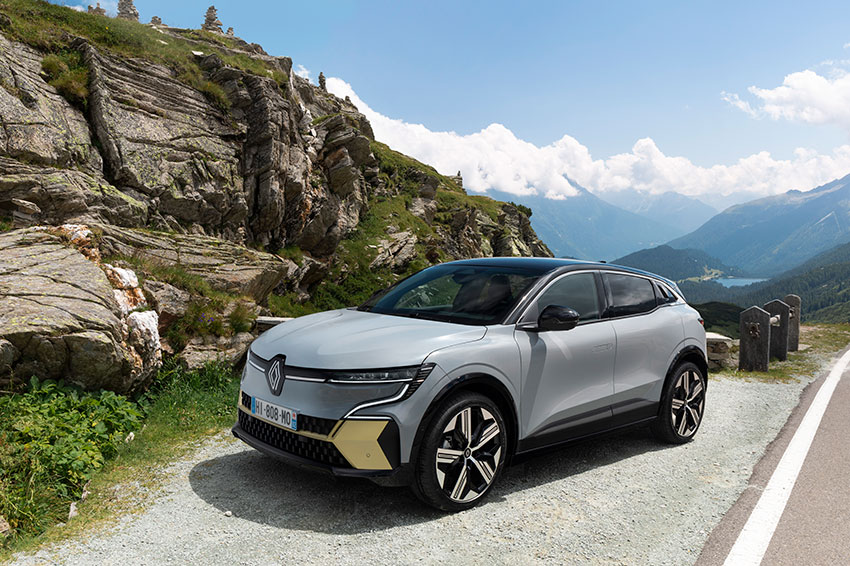 Finally, after years of its zippy ZOE supermini being Europe’s best-selling EV, Renault has plugged its Megane in to the booming demand for electric cars. But the Megane E-Tech Electric shares nothing with the existing five-door family hatch. Instead the newcomer gets the full crossover treatment, and the result is something of a head-turner.

Set to challenge the VW ID.3, the electric Megane delivers 215bhp and 221lb/ft of torque, resulting in a 0-62mph time of 7.4sec. It’s no slouch, with the performance aided by extensive use of lightweight materials, meaning it tips the scales at just 1600kg; that’s around 200kg less than the VW.

Renault claims a range of 186 miles from the modest 40kWh battery pack, rising to 292 miles from the larger 60kWh. There’s also 130kWh rapid charging as standard, meaning you can be back up to 80% charge in around 30 minutes.

Inside there’s plenty of space, plus the very clever OpenR Link infotainment system which combines a 12.3-inch instrument cluster with an 11-inch portrait-style touchscreen. The result is very hi-tech. 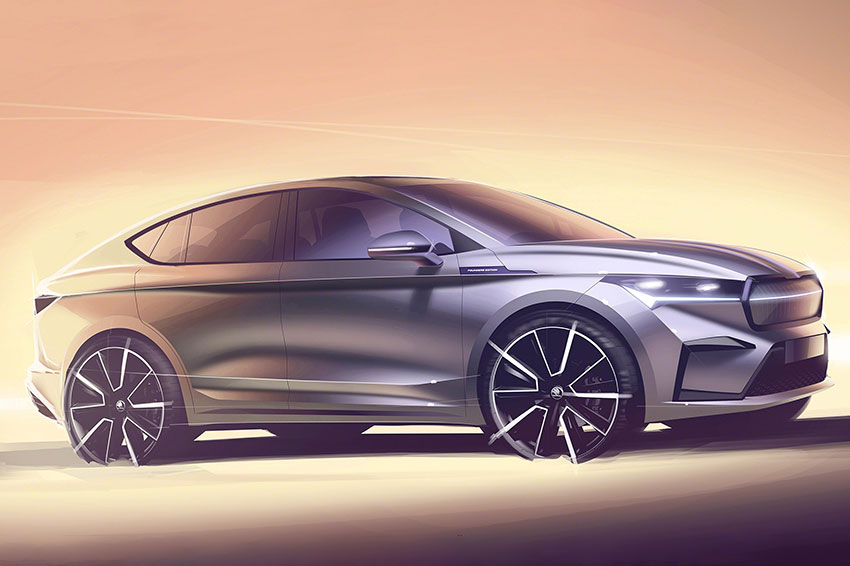 ŠKODA will further supplement its all-electric ENYAQ iV range with the addition of a sporty-looking coupé version. More stylish than the original iV, which itself is a bit of a head-turner, the coupé version will have a sloping roof and ¬¬– certainly according to the official sketches released by ŠKODA – a sportier stance for improved aerodynamics.

Whether it’s carried over to the full production version or not remains to be seen, but the sketch also shows the front apron — lifted from the ENYAQ iV Sportline — is more aggressive than usual. The lower front grille is also deeper and houses the front number plate.

The big attraction though is the sportier roofline, which gives the coupé a more athletic look. There is a small compromise: boot space drops from the 585 litres of the regular ENYAQ to 570 litres.

The coupé range will mirror the powerplants of the regular ENYAQ, though the improved aerodynamics could see an additional range benefit of between six and nine miles. For reference, the regular ENYAQ covers 333 miles from its fully-charged 77kWh battery pack. The coupé will also include a smaller-capacity 58kWh battery, which is expected to have a range of around 260 miles. 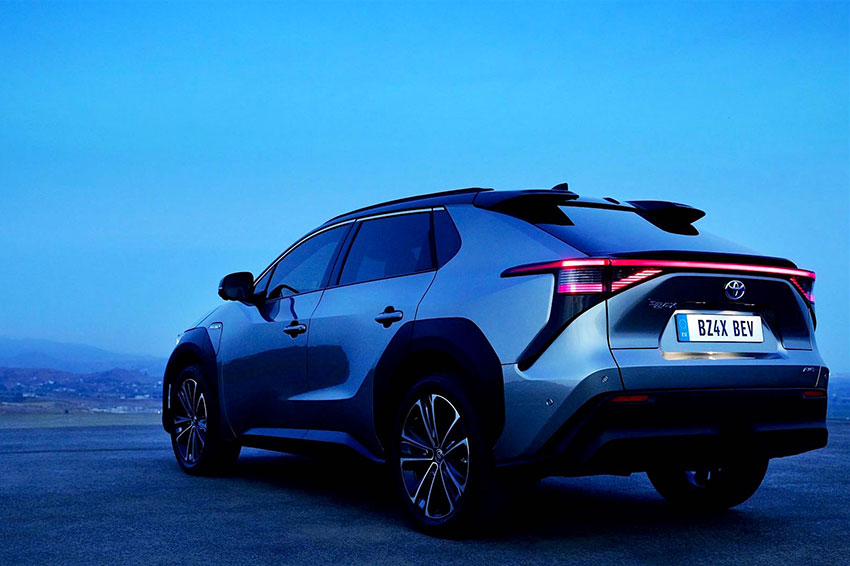 Toyota’s first all-electric model is a family SUV, developed jointly with Subaru. While it is certainly something of a looker, reminiscent of the Hyundai IONIQ 5, the strangely-badged bZ4X might confuse some customers.

Well, according to Toyota, "bZ" represents the nature of a battery-electric vehicle, by going ‘beyond Zero’ emissions; and ‘4X’ describes it as a small crossover SUV, where its numerical digit is sourced from the equivalent-sized RAV4. Easy really!

The Japanese carmaker also says the bZ4X will have comparable comfort and space to the existing Lexus LS luxury car. Plus, it should be full of the latest driver assistance technology, and you can expect a range of around 280 miles from the 71.4kWh battery. Buyers will be able to choose from two powertrains: the first will be a front-wheel drive model delivering 201bhp and 265Nm of torque and will cover 0-62mph in 8.4 seconds.

The second powertrain to be offered will build on Subaru’s extensive knowledge of creating four-wheel drive vehicles: a dual-motor 4Wd version of the bZ4x, producing 215bhp and 336Nm of torque, it shaves 0.7s off the 0-62mph time. 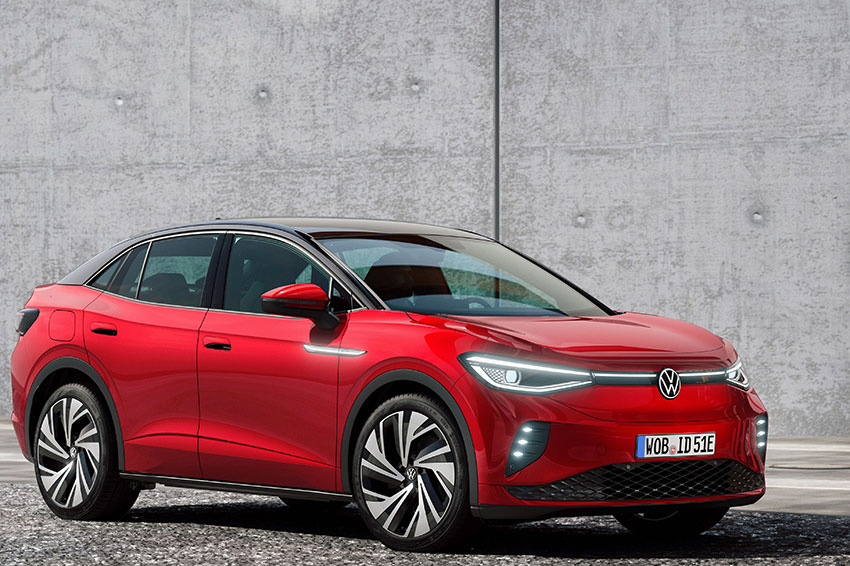 The march of the coupé derivatives of ‘regular’ EVs continues with VW introducing the ID.5 which — it’ll come as no surprise — is a rakish-roofed version of the ID.4.

The entry-level ID.5 will be rear-wheel drive and be powered by VW’s standard choice of 172bhp and 201bhp motors, each capable of covering 0-62mph in 10.4sec and 8.4sec respectively.

Thanks to the new car’s improved aerodynamics, the 77kWh battery — which will be standard in the UK — will deliver a maximum range of 323 miles; that’s a slight improvement over the straight-backed ID.4.

The interior of both EVs is similar, though the ID.5 gains a faster version of VW’s controversial new infotainment system.

Volvo takes the battle to the Audi Q4 e-tron Sportback by introducing its C40 Recharge, which essentially is a coupé version of the existing XC40 Recharge family SUV – makes Swedish sense.

Power comes from two electric motors, each taking power from the 78kWh battery pack, resulting in a combined 402bhp. That, you’ll not be surprised to learn, delivers impressive performance: 0-62mph in under 5.0secs. The range is pretty good too, Volvo says it’ll cover 273 miles on a full charge.