The new site is located in the Palace Grounds Retail Park in Hamilton. 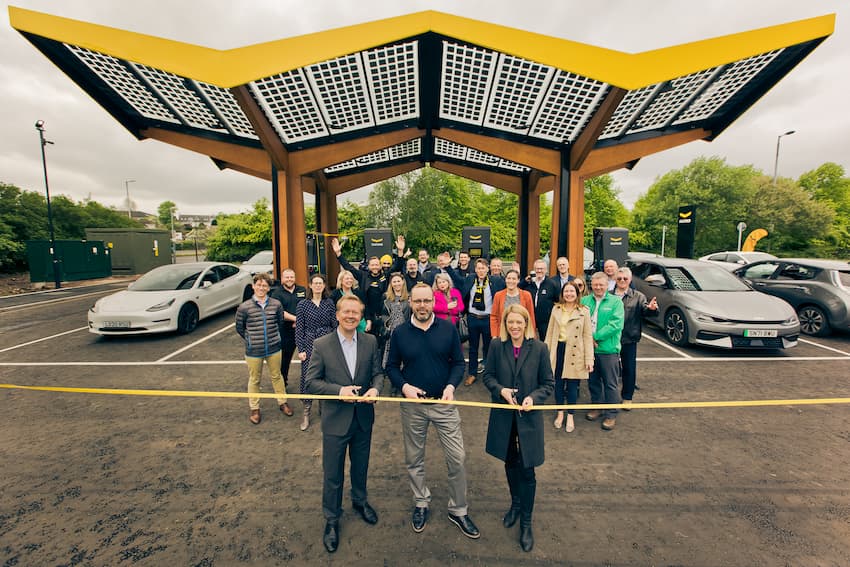 The biggest ultra-rapid EV charging hub in Scotland has now opened, coinciding with the continued growth of new electric vehicle sales in the country. The new site, based in Hamilton, is operated by Fastned.

Offering up to 300kW charging for eight vehicles at a time and powered by renewable energy, it’s the Dutch company’s second site in Scotland, following on from the success of its first site at Dundee.

The new site, in the Palace Grounds Retail Park in Hamilton, is Scotland’s largest ultra-rapid charging site and is convenient for traffic travelling on both the M74 and A72. Significantly, it offers the growing number of EV owners the ability to add up to 300 miles of range in just 20 minutes.

A highly visible solar canopy helps EV drivers to locate the site and stay dry while charging. Reliable and easy-to-use ultra-rapid chargers, as well as a range of payment methods, mean drivers can charge with confidence and get back on the road as quickly as possible.

The charging station, which is the company’s 10th in the UK, was part-funded by the Scottish government’s Low Carbon Infrastructure Transition Programme, which aims to stimulate private investment in infrastructure around the country. The Fastned opening also comes just seven months after BP Pulse opened ten 150kW chargers at Harthill Services on the M8.

'Scotland is very much at the forefront of the electric vehicle revolution,' Transport Minister Jenny Gilruth MSP said as she officially opened the hub, 'and we are seeing impressive growth in uptake. We want to ensure the public electric vehicle charging network keeps up with demand to meet the needs of people and businesses across the whole of Scotland.

'Through our draft vision for the public electric vehicle charging network, we’ve outlined that public and private sector partnerships will be key in attracting investment and scaling provision at pace. This new station from Fastned, with its striking design and powered by renewable energy, is a fantastic example of what can be delivered by industry.

'Fastned’s new hub in Hamilton is a terrific example of what can be done to further encourage people to realise the benefits of driving an electric vehicle.'

Currently, there are only a handful of electric cars – including the Hyundai IONIQ 5, Genesis GV60 and Porsche Taycan – which have the capability to take full advantage of the chargers’ 300kW output. However, the eight units will also ensure owners of vehicles capable of 100kW+ charging can maximise their car’s charge speeds.

And as sales of EVs across the UK, and specifically Scotland — where one in ten new cars registered in March were all-electric, and the UK as a whole has seen EV registrations up 40% compared with the same time last year — it’s crucial the roll-out of ultra-rapid and fast charging stations continues to keep pace across the country,

Tom Hurst, UK Country Manager and Network Development Manager for Fastned, said: 'Scotland has long been at the forefront of the UK’s transition to a greener future, and transport is no exception.

'We are delighted to be helping with this transition. Our new station, currently Scotland’s largest ultra-rapid charging station, will bring fast, reliable and easily accessible charging to the area.'

It was a view backed by Neil Swanson, Director of Electric Vehicle Association Scotland, who understandably welcomed the latest addition to the country’s charging infrastructure.

'It is essential that EV journey charger locations offering multiple simultaneous connections become as common as petrol filling stations across the country,” Swanson said as he highlighted how the latest opening would help encourage drivers to choose an EV.

'The significant increase we are seeing in drivers switching to all-electric vehicles is incredible so expanding the charging infrastructure in Scotland is vitally important to meet demand. “The opening of facilities such as this will be yet a further incentive for owners of petrol and diesel- powered vehicles to ignore the myths surrounding the lack of EV charge points and make the switch to all-electric.'

For drivers planning to or considering switching from petrol and/or diesel vehicles to an all-electric mode of transport, a visit to one of Arnold Clark’s two Innovation Centres could prove highly informative.

With drivers able to choose between locations in either Glasgow or Stafford, the Innovation Centres are not for car sales. Instead, their core priority is to educate the public on alternative fuel vehicles, including all-electric and hybrid.

With a comprehensive selection of EVs available to test-drive, visitors can also take time to quiz the team of Arnold Clark product geniuses and find answers to whatever concerns they may have regarding specific models, range, charging and overall suitability.

A motoring journalist with more than 30 years' industry experience, Jim is a car reviewer and feature writer for Arnold Clark.