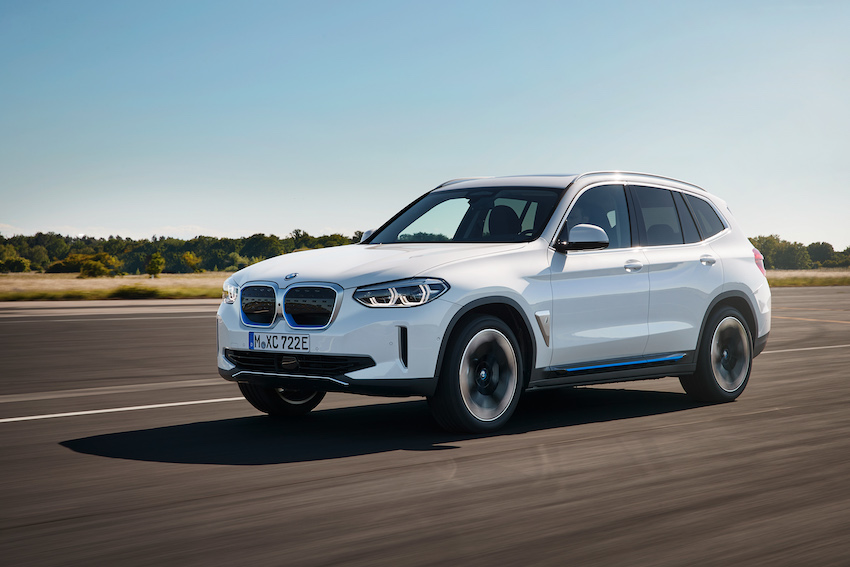 Arriving hot on the heels of their latest all-electric model, the iX, and a decade since the launch of their inaugural electric production car, the i3, BMW have added another all-electric i model to their expanding line up – the iX3.

Based on the same platform and sharing the same engineering as their biggest selling car, the third-generation X3, the new BMW iX3 is the third member of the electric-focused i family. The iX3 isn’t a dramatic departure from its sibling; the cabin is mostly unchanged and, aesthetically, it shares most of the same design cues. The big change is in the powertrain department – from combustion to electric.

Like the X3, the iX3 is aimed for people who want a crossover without being an off-roader. With its high driving position, practicality and advanced technology – mixed with BMW’s latest generation battery and electronic capabilities – there’s plenty on offer from the mid-sized crossover. The iX3 is the first model to feature BMW’s fifth-generation eDrive technology. 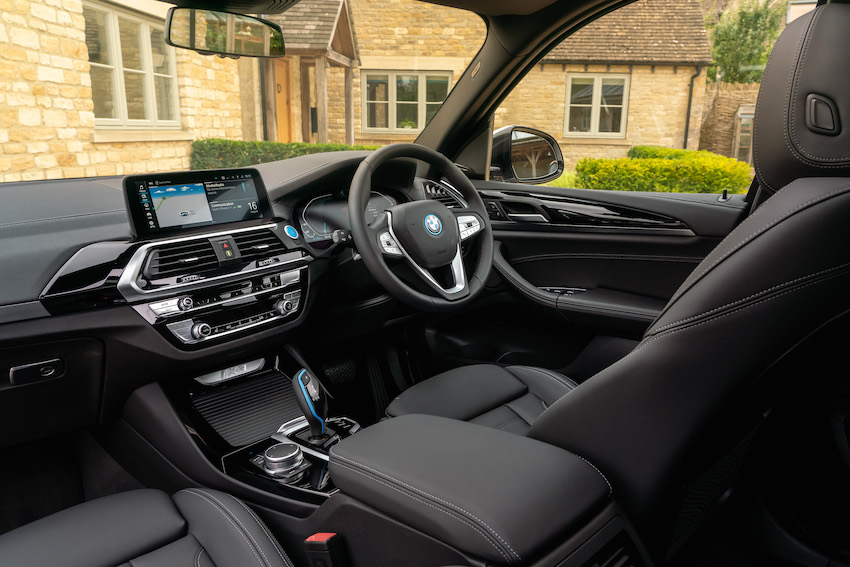 Build quality is excellent, as you’d expect from BMW. The cabin is well finished, and includes fine stitched leather and durable materials. There’s a stack of tech as standard which is easy to use, and there’s physical buttons to control climate, different driving modes and driver assists to name but a few. The new 12.3-inch infotainment is touchscreen, but can also be controlled via the iDrive dial, which is prominent on the lower console. The digital screen is sharp, precise and easy to navigate. There’s a newly designed control panel for the gear selector, BMW Controller and the stop/start button. It’s nice to see BMW utilising the mix of buttons and touchscreen.

One notable difference on the instrument cluster between the iX3 and the X3 is that electric icons and gauges appear instead of the traditional ones. You’ll find a power-regen dial in place of the rev counter, and a battery gauge instead of the fuel, with more data for battery life and efficiency on the central display.

The iX3 comes in two models – the M Sport and M Sport Pro. As standard, the M Sport package offers 19-inch alloys and LED headlights, with M aerodynamic 20-inch alloys and BMW Laserlight adaptive headlights optional. Comfortable, supportive sports seats with Sensatec-perforated upholstery are standard, as are i Blue accents on the gear selector, stop/start button and steering wheel. There’s plenty of space on offer all round for adults, and the boot is an impressive 510 litres. 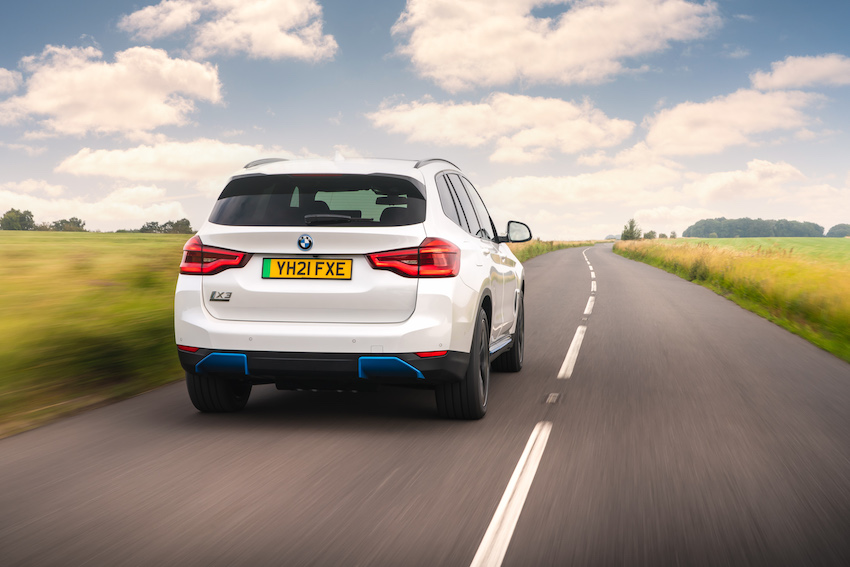 There’s plenty of equipment as standard, giving its competitors a run for their money. Both models come with electrically adjustable seats, adaptive damping and a panoramic glass roof. The standard driver’s assist package includes lane control assist, adaptive cruise control with stop and go functionality and parking assistant with reversing camera. Self-parking and gesture control are optional. BMW Live Cockpit Professional with cloud-based navigation and maps are standard, as is smartphone integration with Apple CarPlay and Android Auto.

Don’t be fooled by its crossover appearance, the iX3 is a classic rear-wheel-drive BMW, however, behind the wheel it is barely noticeable. Rarely do the rear wheels get frisky, with the traction control and balance working a treat. On the road, the iX3 is an easy car to drive. Its accurate steering and responsive braking make driving pleasurable, whether in town or on the motorway. Bodyroll is minimal and road and wind noise are almost non-existent. The adaptive dampers work well to help provide a smooth drive. 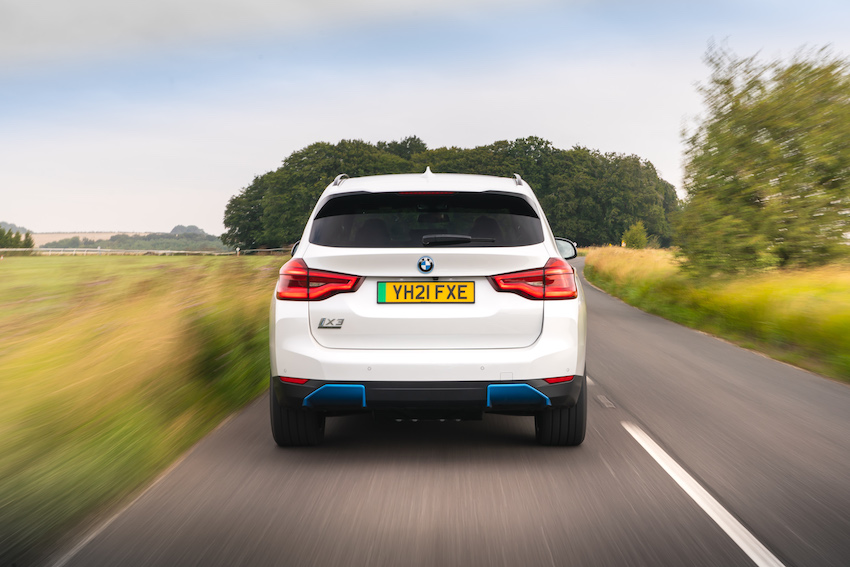 The iX3 delivers a performance fit for a family drive, without the excessiveness of some other electric cars. It doesn’t try too hard, nor does it need too. There’s comfort when you want it, power when you need it, and, at 2.2.tonnes, the 282bhp and 295lb of torque is more than enough. The pure-electric iX3 is a mainstream model which seamlessly delivers a top speed of 112 mph and a 0-62mph in 6.8 seconds.

I was pleasantly surprised when the iX3 didn’t deliver whiplash acceleration, which some German competitors are known for. Instead, it was a measured, smooth and composed acceleration with balanced power displacement.

The pièce de resistance is, of course, the new electric powertrain. There’s a highly integrated drive system with a single electric motor and transmission. The iX3 is more efficient than rivals, has a smaller battery and can take a higher power charge. 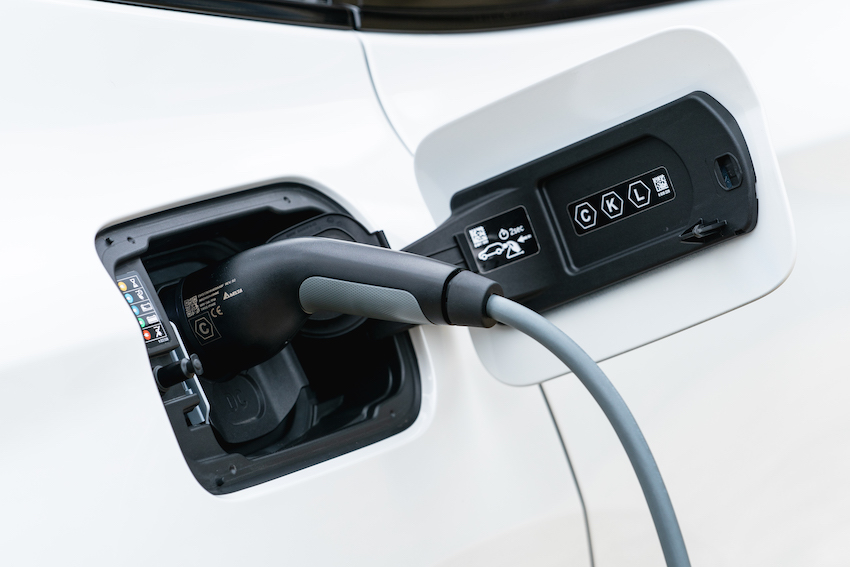 The iX3 not only matches its rivals in terms of range and charging speeds, but on occasion beats them. With a claimed range of 286 miles, it exceeds that of its German counterparts. The ‘real’ range will however depend on several factors, including weather, climate, use of climate control systems and driving style. High winds and cold weather can result in the range being significantly reduced, whereas milder and calmer conditions can in turn increase range.

The iX3 is amongst the fastest to charge, supporting charging speeds up to 150kW on rapid public charge points, meaning it can top up from 0-80% in just under 30 minutes. Home wall boxes using a 11kW charge will enable a full charge in approximately 8 hours, though some homes will be limited to 7.4kW, which require just under 12 hours to charge.

The automatic regeneration system takes signals from the sat nav, such as upcoming bends, speed limits, junctions etc., and also radar sensors. When you take your foot off the accelerator, the regeneration will smoothly and efficiently slow you down. It means the system provides different effects in different circumstances, something which you’ll quickly get used to. The system is quite impressive. After driving the car, I was surprised how much mileage I still had left in the battery, considering I had driven it for hours.

BMW are onto another winner with their new all-electric iX3. It’s an effective crossover, combining the latest in technology with efficiency, practicality and comfort.

View the BMW i range