The new flagship model arrives as a plug-in hybrid next year. 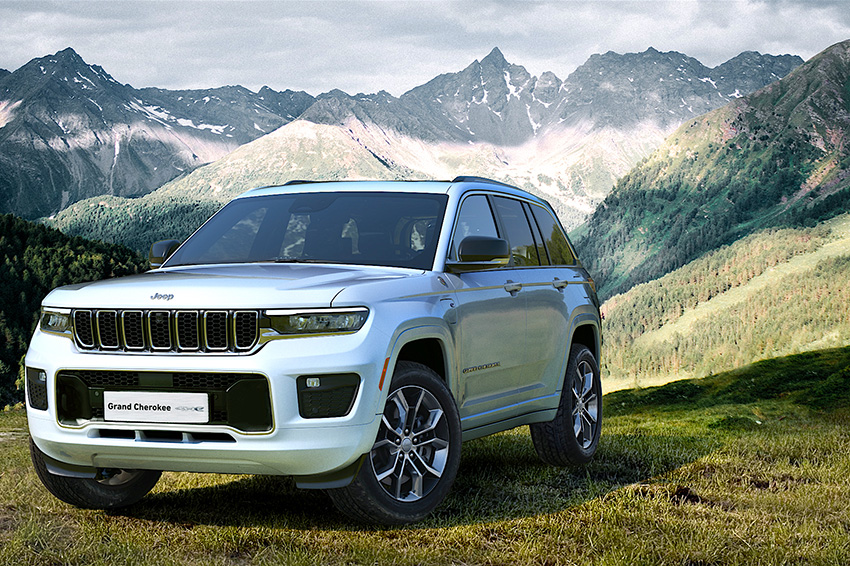 Orders are now open for the Jeep Grand Cherokee 4XE plug-in hybrid, arriving in the UK in early 2023.

Jeep has brought its new flagship model, the Grand Cherokee 4XE, to the UK. But significantly, while the US market gives buyers the choice of both V6 and V8 petrol models, plus a seven-seat option, the UK is restricted to the new plug-in hybrid version complete with five seats.

According to Christian Meunier, Jeep Brand chief executive officer, the new model, the fifth generation, is ‘the most luxurious and 4x4-capable Grand Cherokee ever.’ No surprise then that it’s gearing up to go head-to-head with many of the large premium SUVs already on the market, including the Land Rover Discovery, Audi Q7 and BMW X7.

So, what’s under the bonnet?

Interesting you mention the bonnet. This new Grand Cherokee actually has a longer bonnet than its predecessor. It also benefits from a lower roofline and slimmer LED headlights. Power for the new model comes from a 2.0-litre, turbocharged four-cylinder petrol engine mated to a 17kWh battery and electric motor system. Combined output is 380bhp and 637Nm of torque, and the power is sent to all four wheels via an eight-speed automatic gearbox. The Grand Cherokee 4XE PHEV is capable of covering 0-62mph in 6.3secs, and will tow up to 2,721kg. 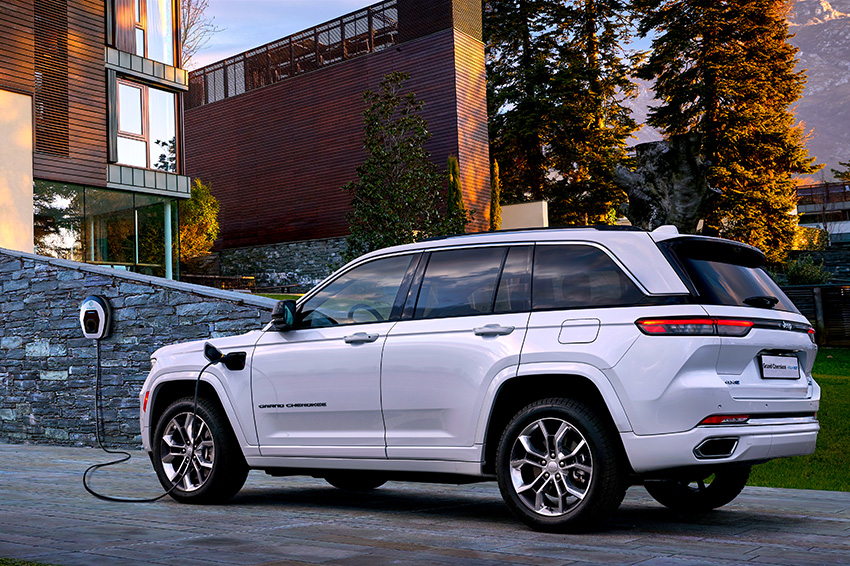 Jeep boffins also say the newcomer has an all-electric range of 32 miles. To further aid economy, the SUV has also been fitted with a front axle disconnect system. This automatically cuts drive to the front wheels under light-load situations.

The new SUV is also fitted with three ‘E-Selec’ modes. The first, ‘Hybrid’, blends torque from the electric motor and petrol engine for a combination of fuel efficiency and performance. Flick to ‘Electric’ and, not surprisingly, power comes only from the electric motor until power from the engine is required. Finally, ‘eSave’ uses only the four-cylinder engine to save the battery’s charge. 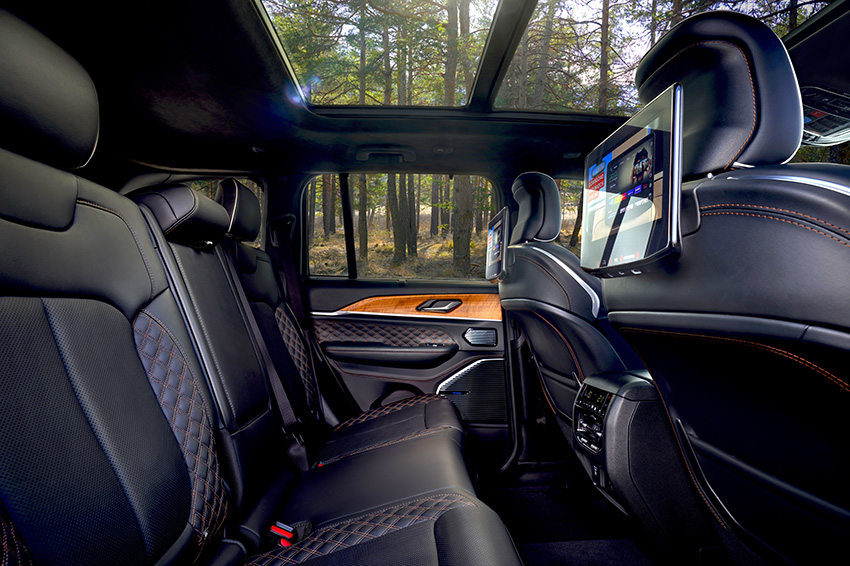 Is there a difference to the 4WD systems?

There is. Buyers can choose from two four-wheel drive systems, Quadra Trac II and Quadra Drive II. The former, which uses a two-speed low transfer case that can send up to 100% of the available engine torque to the front or the rear axle, is available on the Limited and Overland spec SUVs.

Across the entire four-trim range, the new Grand Cherokee also gets Quadra-Lift air suspension, which is fitted with electronic semi-active damping. This package ensures up to 10.9 inches of ground clearance and a wading depth of 24 inches.

Any styling or tech improvements?

Definitely. This new Grand Cherokee looks more aggressive than most of its rivals thanks to a 36mm wider track than the previous generation, allied to more upright proportions. Buyers can also opt for alloys up to 21 inches. The exhaust tips are incorporated within the bumper, and both Trailhawk and Summit Reserve SUVs get a gloss black roof as standard.

Inside, the cabin is dominated by a 10.1-inch infotainment screen with Jeep’s UConnect software, plus Apple CarPlay and Android Auto. There’s also a 10.25-inch digital TFT cluster and 10-inch colour head-up display, both of which sit in front of the driver. 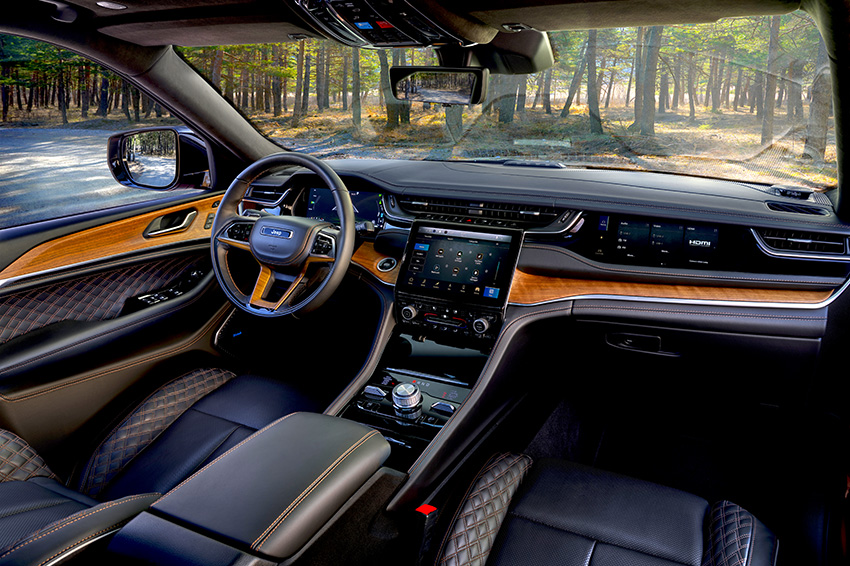 Also included is a 4G Wi-Fi hotspot, which can connect up to eight devices, plus the infotainment system includes an integrated pitch and roll sensor for off-roading. Standard tech across the range includes a wireless smartphone charger, a digital rear-view mirror, electric boot lid opening, ventilated front seats and second-row window shades. 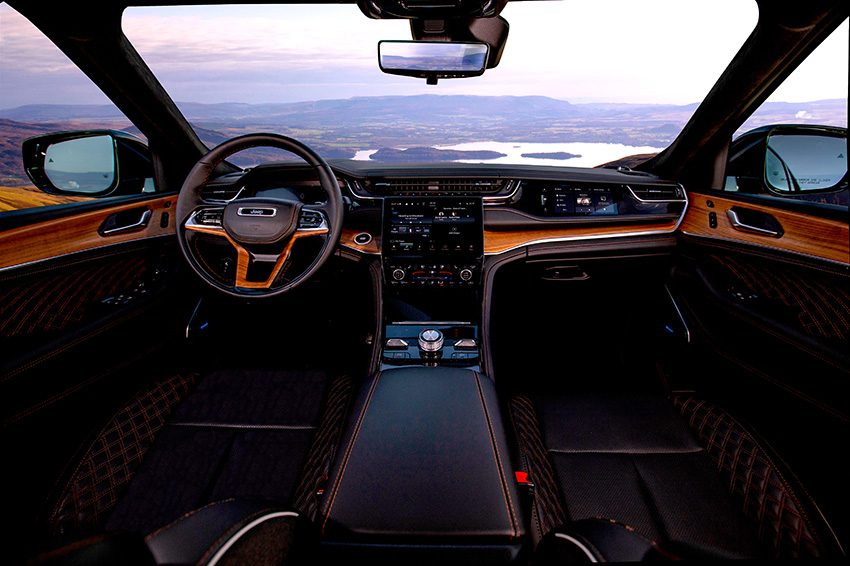 Further safety tech is available on the options list, including drowsiness detection, park assist, a 360-degree camera system, level two autonomous driving and a night vision camera with pedestrian and animal detection of up to 200 metres.

Order books are open now at Arnold Clark, with first cars scheduled to arrive in the UK early in 2023.