The Civic has withstood the test of time, but how will its latest offering compare to its predecessors? 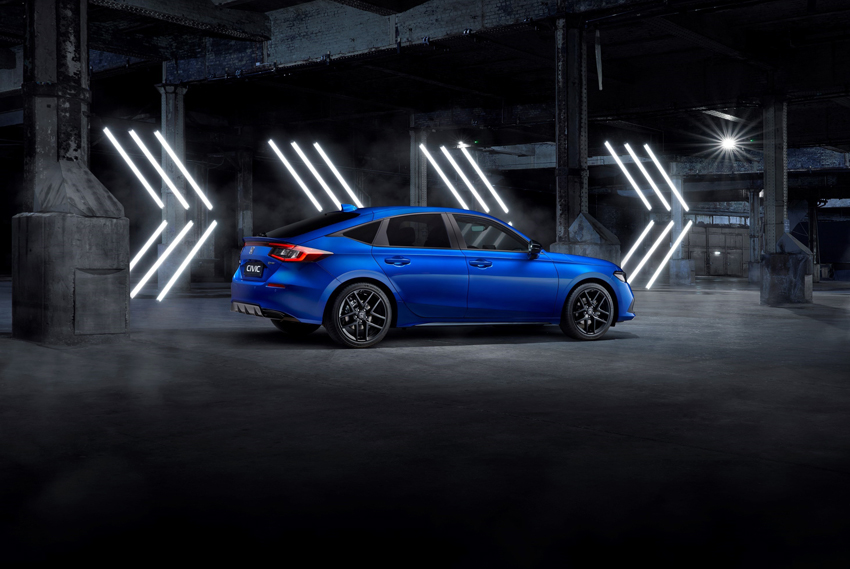 The Honda Civic has been on the scene for so long that it's now on its eleventh generation.

Despite the hordes of motorists clamouring for SUVs, the Civic has endured the test of time, sometimes with the unique ability to simultaneously appeal to both the young and old.

But now, the Civic has introduced another change as it attempts to remain relevant for years to come… the e:HEV.

What is significant about it, is not that it's a hybrid but that it's the only variant of the Civic that you can now obtain (except for the Type-R hot-hatch).

The car now houses a 2.0-litre petrol engine with two electric motors that blend to generate 184PS, making it a full hybrid (self-charging). The non-hybrids are no more.

In terms of looks, the Civic still retains a bit of quirkiness, but the design has been watered down from its previous insanity. However, its personality remains intact, even if it now looks a little more sensible.

It still resembles the outgoing model, but everything is toned down slightly, with the large (and fake) air intakes at either side now a lot smaller. 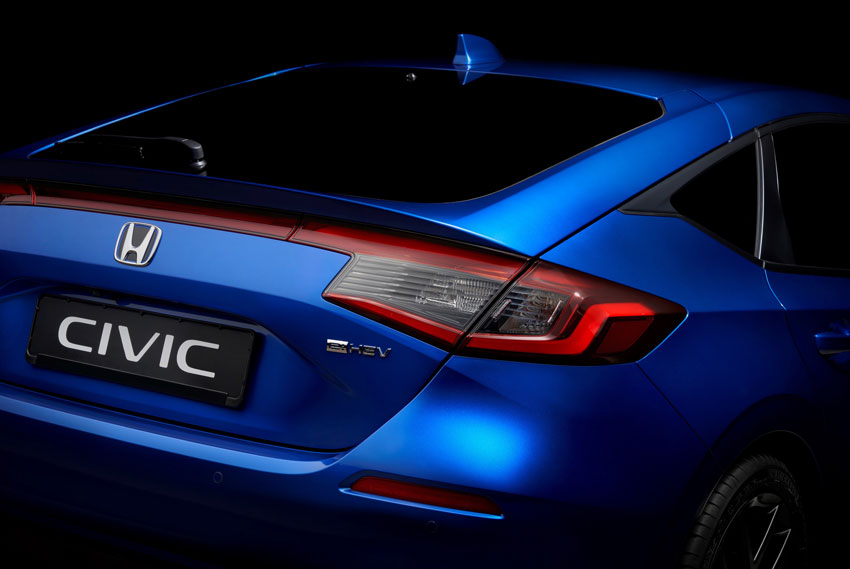 Meanwhile, the sporty crease in the doors is less pronounced than before, while the rear appears more grown-up and less jagged.

There are three trims available for the Civic e:HEV. Elegance, Sport, and Advance. I tested the latter.

On the road, the Civic moves away well, with instant throttle response helping you to deal with 0-62mph in 8.1-seconds. The Honda’s maximum speed is 112mph.

That is no thunderous performance level, but the Civic accelerates keenly. And, when doing 50mph on a motorway, it expends no effort in getting up to 70mph.

One of the electric motors propels the front wheels, and the engine is often used more for powering the motors.

The new Civic will sometimes run on the electric motors alone, but the switchover is seamless and barely noticeable when the petrol engine is called into action.

The three main driving modes, Eco, Normal and Sport, correspond to how much hybridity you want to experience, with Eco minimising the engine's input. In contrast, the Sport relies on the combustion unit more heavily.

An Individual mode also enables you to customise your preferences through the infotainment system.

The Japanese-made Civic is only available with an electronic continuously variable transmission (eCVT), too, and Honda has done well to make it as refined as possible.

Regarding handling, the East Asian automaker has stiffened up the suspension and lowered the centre of gravity, which helps with stability in the bends. 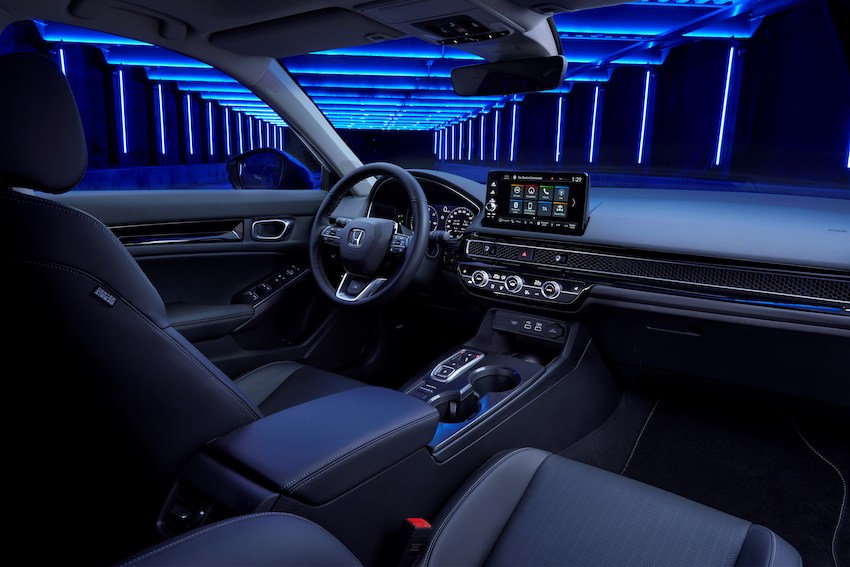 While it has plenty of grip and is reasonably engaging to drive with decent steering, you find its limits quickly if you throw it into a corner. But the Civic is controlled and predictable. Soundproofing is also vastly improved compared with its predecessor, with the experience being more serene, obviously helped by the engine only working part-time.

The interior looks smart, if not incredibly luxurious. A honeycomb effect spans the dashboard's width, hiding the air vents behind it, while the infotainment screen is positioned on top like a tablet.

Although the system is a step forward from Honda's older infotainment offerings, it isn't the most responsive screen, but the menus are straightforward to navigate.

The voice-activated personal assistant helps you find petrol stations, restaurants, and other amenities. It is a good feature, while Honda also offers a smartphone app that can perform certain functions, such as locking and unlocking the vehicle.

The Civic is longer than before, adding a little extra legroom in the back, while the cabin feels bigger inside than the old models.

It is a similar story in the front, too, which is spacious enough for taller drivers, providing good visibility. Although the car's rear visibility is compromised by the obstructive angle of the sloping roofline, all models get a rear-view camera to assist.

Boot space is 409 litres, which expands to 1,187 litres with the rear seats folded down. In terms of running costs, the Civic manages up to 60mpg, producing 114g/km of CO2. Those figures are relatively respectable.

What’s more, a three-year, 90,000-mile warranty is included as standard. At the same time, Honda also offers a maintenance package called 'Five', which extends the warranty to – you guessed it - five years.

The new Honda Civic e:HEV is yet to be crash-tested by leading safety body Euro NCAP, but the withdrawing model earned a four-star rating when assessed back in 2017. 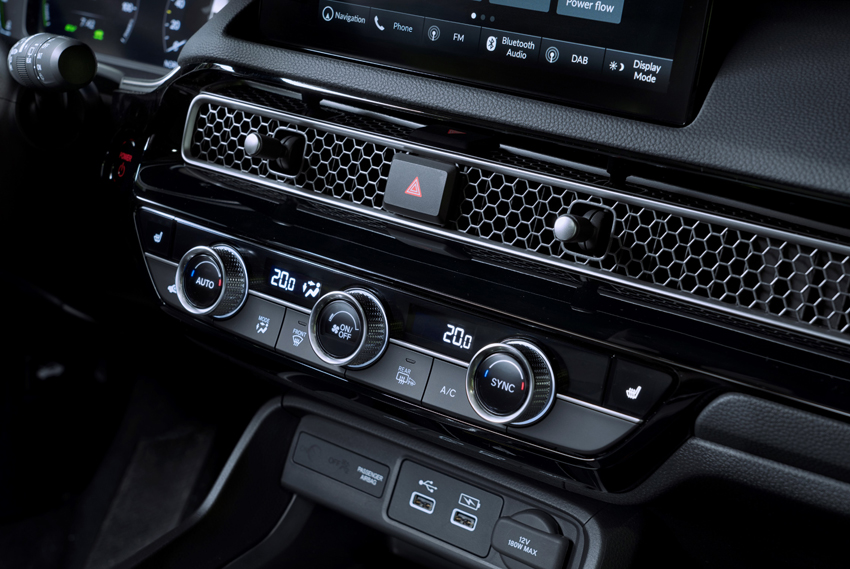 The Honda Civic is a different car than before but arguably more desirable. Sure, it’s more conservative, but that’s no bad thing if you thought its previous looks were too flashy, while its revised suspension makes it better to drive. However, keener drivers will still want to look at the Type-R.

The Civic is more practical than before thanks to a slightly longer body, more economical than ever, and cleverer. It is also more refined and more mature than its predecessor. Undoubtedly, the fresh Honda Civic now wears less powder and paint - but turning the loud visuals down a notch might be what it needed.