The Swedish manufacturer has produced a car with a decent range, excellent practicality, spaciousness, and top ride comfort, writes Tim. 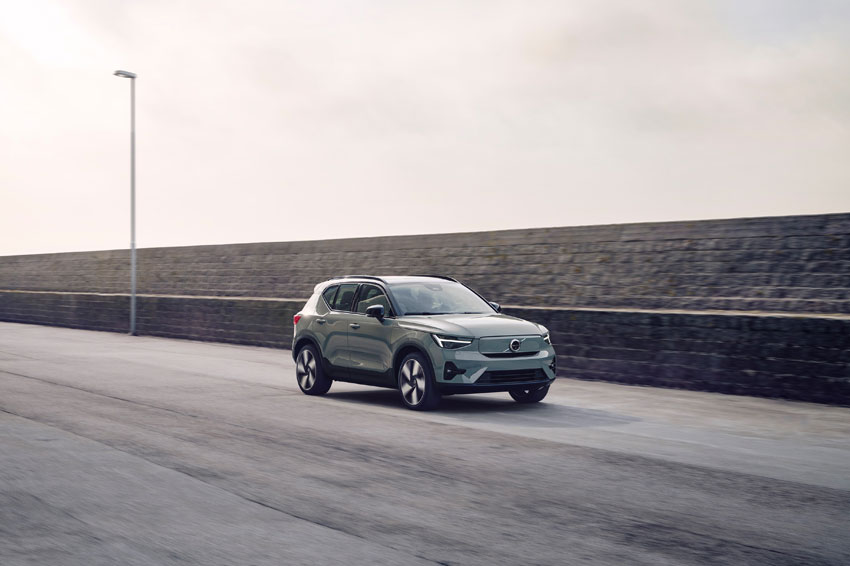 Volvo has been on an electric roll for a while now, and it seems to be pushing closer than ever to the likes of Audi and BMW’s electrified offerings.

The XC40 Recharge is one such vehicle that, on the surface, appears to strengthen this growing reputation for electric excellence.

The Audi Q4 e-Tron is very much in the Swedish manufacturer’s sights, along with other competitors like the Tesla Model Y, Mercedes-Benz EQA and the now ageing Jaguar I-Pace.

However, while all these players were built from the ground up as electric vehicles, the XC40 wasn’t – mild-hybrid petrol variants are still offered today.

There are a few giveaways as to its battery-powered credentials, such as the grille being covered with a plastic panel. But the Volvo retains the good looks of its fossil-fuelled sibling, with mean-looking headlights and some thick, rugged side skirts. 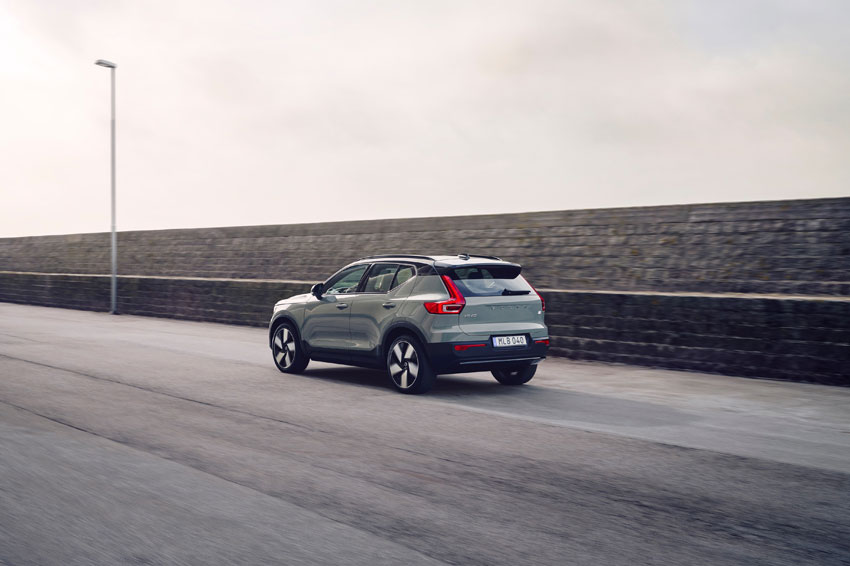 At the back, the taillights swoop around at the sides while a roof spoiler hangs over the rear window. Meanwhile, the middle of the boot is left blank because the number plate sits lower down. 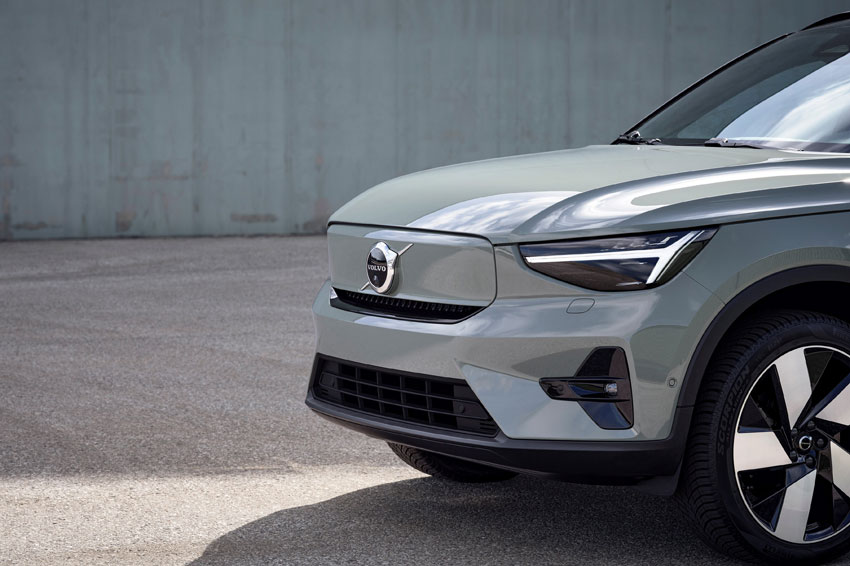 The Plus trim adds pilot assist, heated powered seats, a heated steering wheel, an air quality filter and keyless entry and go. Next up, the Ultimate trim adds 20-inch wheels, a panoramic roof, a Harman Kardon premium sound system and a 360-degree camera.

Disappointingly, though, leather upholstery is an optional extra.

You get dual electric motors, providing all-wheel drive and producing 408PS. They are powered by a 78kWh battery with a range of around 257 miles and a zero to 62mph time of 4.7 seconds.

A 0-80% battery top-up takes less than three quarters of an hour thanks to a 150kW charging speed. 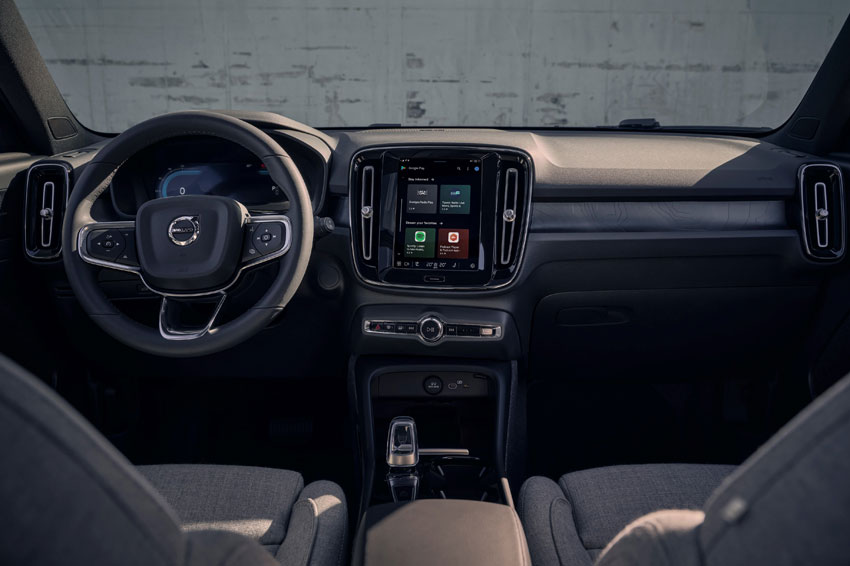 As you’d imagine, it’s not slow off the line, with torque delivery so quick you’d think it was on the move before you’ve pressed the accelerator pedal.

There is power in reserve all the time, so overtaking on motorways is a doddle. But it’s in the bends where things go a little awry.

The heaviness of the batteries means there’s a lot of weight to shift around a bend. And, while the all-wheel drive system ensures there’s no scarcity of grip, the body lean is quite substantial if you’re going too quickly.

Sports mode firms up the steering a bit, but not enough to substantially alter the driving experience.

Few SUVs are capable of athletic handling, however, and Volvo’s focus is very much on the XC40 being a quick but comfortable motorway cruiser.

If comfort is a priority, then the 19-inch wheels of the two lower trims will be preferable, although the more prominent 20-inch rims of the top-of-the-range model aren't excessively firm.

Inside, the cabin looks nice, with an imposing steering wheel and the Android infotainment screen mounted in an unusual portrait style within the dashboard.

Rather than offer Google’s Android Auto as a bolt-on to its own technology, Volvo’s entire system is made by Google. However, Apple CarPlay is also included for those who are firmly on the other side of the fence in such tech battles.

The system is impressive, clear, and responsive, although some of the menus aren’t necessarily that intuitive. Plus, the cabin temperature must be adjusted via the system, which is an unwelcome feature.

You will also like the digital instrument cluster that displays an integrated map of directions from the excellent Google Maps sat nav.

The interior is bathed with lots of supple-to-the-touch surfaces and piano black trim, although a little more use of silver would’ve brightened things up a bit. 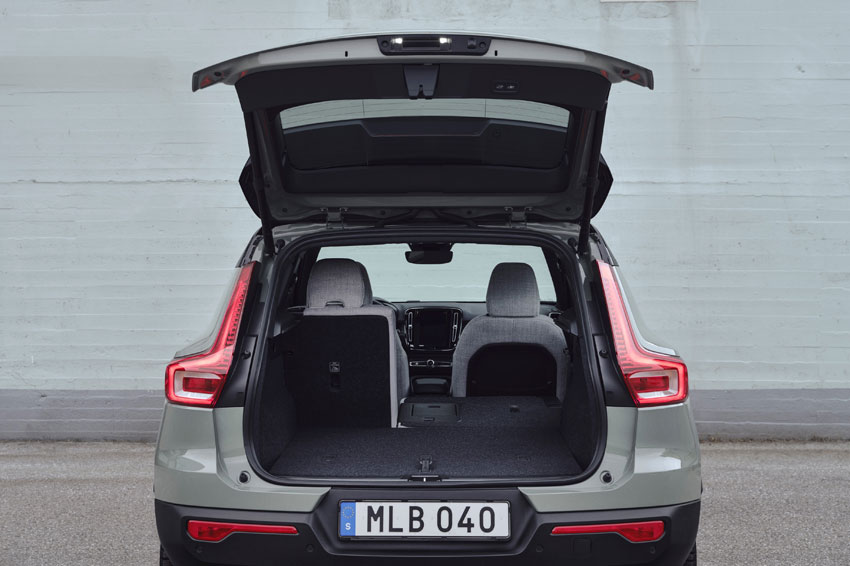 Recycled and environmentally friendly materials feature heavily, such as the carpets being made from recycled plastic bottles.

There is a valuable amount of space in the front, so even taller occupants won’t be short of headroom or legroom. Meanwhile, the rear will accommodate two tall adults with ease, or three if you don’t mind rubbing shoulders.

The batteries sit under the floor, and, unlike most manufacturers, Volvo hasn’t needed to lift the deck height in the rear to accommodate them. Therefore, your feet aren't raised, resulting in better under-thigh support.

There is also a wealth of storage space, with large door bins and room in the central cubby while leaving enough space for two cupholders. A wireless phone charger can be accommodated, too, although it’s an optional extra.

Visibility is good out of the front, although the rear pillars are substantially thick, so the cameras and parking sensors come in handy.

In the boot, there’s no lip, so sliding large, weighty items in is easy, while 452 litres of cargo space is offered. However, that's 39 litres less than the fossil-fuelled versions due to the batteries taking up room.

This expands to 1,328 litres with the rear seats folded away in a 60/40 split. Plus, you get just over 30 litres of additional storage under the bonnet.

Running costs should be meagre, plus the XC40 is in the bottom band for benefit-in-kind tax, so it will be attractive to company car operators.

A three-year, 60,000-mile warranty is offered as standard, although this can be increased at an extra cost. Meanwhile, Volvo is rated around average when it comes to reliability.

The XC40 also comfortably achieved a five-star safety rating from Euro NCAP, scoring 97% for adult occupants, 87% for children and 76% for safety assists.

Moreover, while the Audi Q4 e-tron can beat the XC40 for range and boot space, it can't match the Volvo for its lightning-quick pace.