The Paris Motor Show was back with a bang this year, as some of the biggest names in the automotive industry showed off their latest designs. 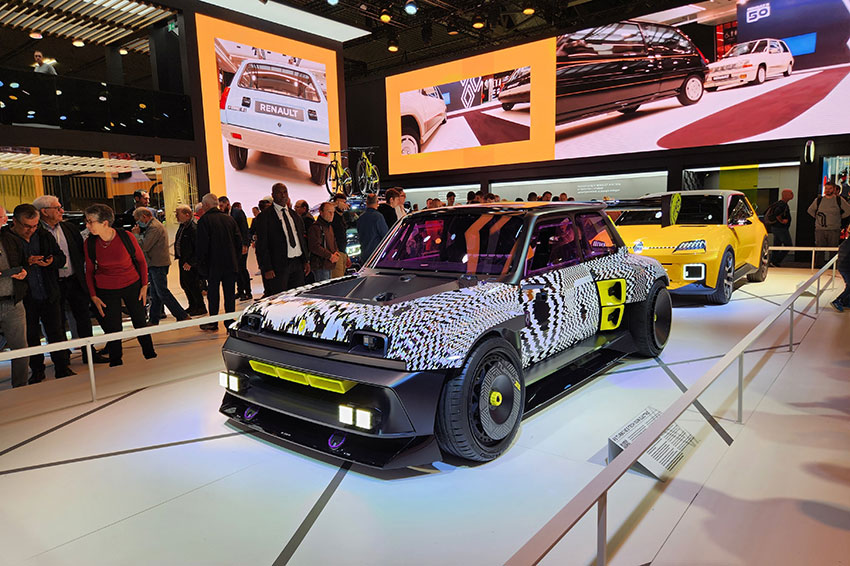 Paris in the autumn has officially returned to normal.

This is certainly true for the automotive world because, for the first time since 2018, the Paris Motor Show returned this October in style, with manufacturers and, most importantly, the public viewing the latest cars to be unveiled.

Not surprisingly, while the likes of Mercedes-Benz and Jeep lifted the wraps from new models, it was the French manufacturers who grabbed most of the headlines.

First and forefront was Renault. Ok, at the moment, the two eye-catching models are officially deemed as concepts, but while the new Renault 4 will definitely make it to market, it was the bonkers-mad R5 Turbo 3E which had photographers scrapping with each other to get the best image of the future. 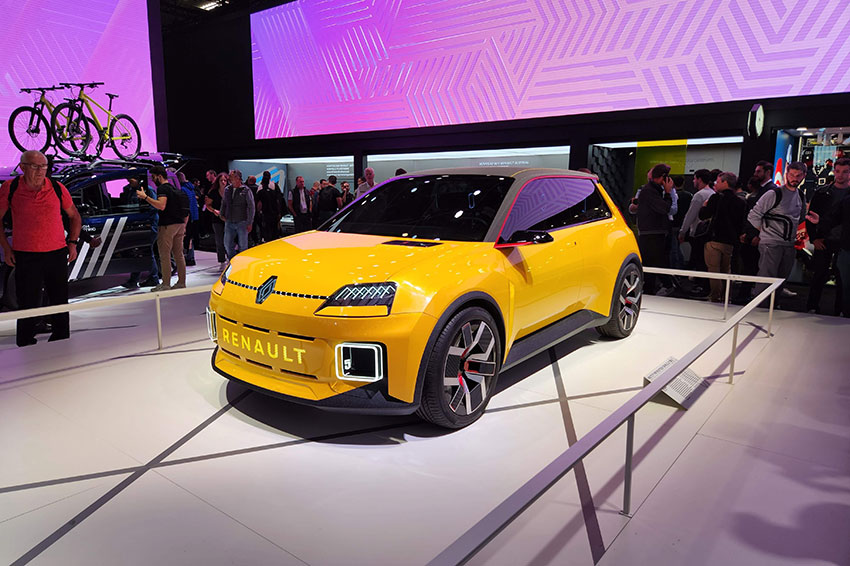 We know there will be a full production model of the new all-electric Renault 5. That’s fine. But Renault boss Luca de Meo used his Paris platform to announce that he wants to build a road-going version of the company’s stunning 5 Turbo 3E.

Yup. And as you can see from the image, it doesn’t exactly hide its light under a bushel. This is electric madness personified. Just look at the massively-flared wheel arches with their huge airducts, the not-so-subtle rear wing — which wouldn’t look out of place on a banger-racing stock car — and the not insignificant rear diffuser.

Celebrating the 50th anniversary of the original Renault 5’s launch, the Turbo 3E is effectively based on an Andros Trophy ice-racer space frame chassis. With a pair of electric motors at the rear, it develops a total output of 375bhp.

Will it ever become reality? Who knows? But according to de Meo, while the technical solution for putting a road-going version together essentially isn’t a problem, the bigger challenge the company faces is finding the funding.

‘The technical solution has almost been found,’ the French boss said, ‘but now we have to push to find the money to do it. I might even look to crowdfunding to achieve our goal.’

What about the Renault 4?

While the future of the Turbo 3E remains, at the least, clouded, there’s more clarity surrounding the new Renault 4. Shown in Paris as a concept in the form of the Renault 4Ever Trophy, the company has confirmed the new R4 will go on sale in 2025 in the form of a compact family SUV.

But here again, we need to look at the images. Product leader on the 4Ever project, Laura Gregoire, admitted the silver-coloured parts on the body of the ‘concept’ are very close to being fully production ready.

However — and this may disappoint a few people — the black recycled plastic parts which give the concept its rugged look are unlikely to make it to the road-going version. Sure, there will be some cladding for the wheel arches and bumpers, but the production version will certainly be toned down.

Will the top-hinged tailgate and umbrella gear lever survive?

As an homage to the seventies original, the new R4 will certainly have a top-hinged tailgate as seen on the original hatch. In styling terms, the shut lines will flow down from the roof to the taillights, then around their outsides down to the bumper.

The original R4 also had its iconic umbrella gear lever. And while there’s certainly no need for a gearstick in what will be a fully automatic electric R4, Renault bosses and designers are believed to be working out a solution which would see them incorporate the shape into the cabin of the new model.

Dimensions for the new R4 have yet to be released, but we know the 4Ever Trophy is 4060mm long with a wheelbase of 2570mm. Worth highlighting is that the new R5 — which uses the same CMF-BEV platform — is 3,920mm long. And the 4Ever concept is powered by a 42kWh battery which feeds a 138bhp motor mounted on the front axle. 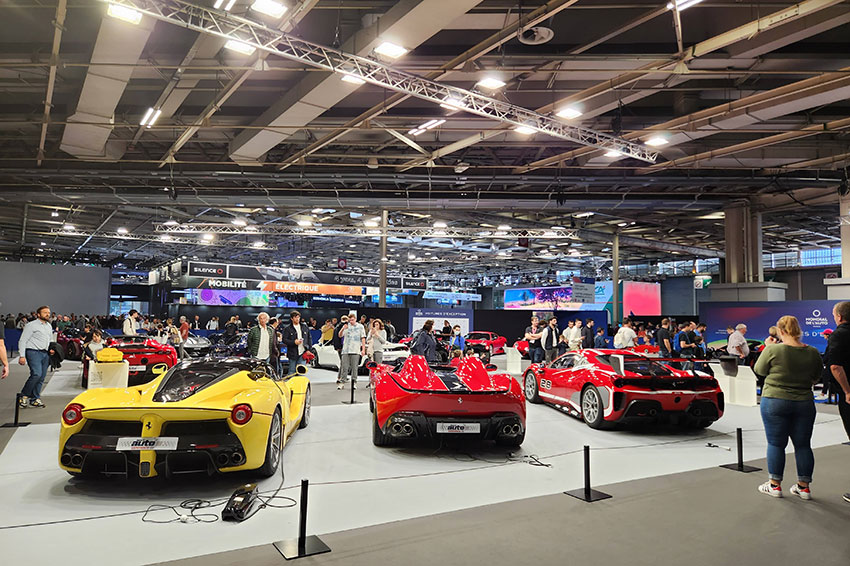 Any word on pricing?

Not yet, prices for both the Renault 4 and the Renault 5 remain under wraps? So, I’m only at the stage of guessing really here (though there is an element of fact to my thinking). Renault bosses are keen to launch the R5 at a sub-£20,000 level, so that looks like a given. As for the R4, the company sees the compact SUV as a more premium model, so expect an entry-level price of around £25,000.

Didn’t Dacia reveal a concept too?

It did. Still under the Renault Group umbrella, there was more fun on the Dacia stand where it unveiled its Manifesto concept. Ok, it won’t become a production model, but it will, in true concept style, influence styling and tech solutions for the company’s future models. That means the forthcoming next Duster in 2024 and the Bigster family SUV in 2025.

Thankfully, both those though, unlike the Manifesto, will have windscreen and doors, neither of which appear on the concept. Why so open in the Manifesto? Dacia claims the occupants can be ‘closer to nature’. Not exactly attractive in the UK on a damp and miserable November morning.

Get the interior dirty, and Dacia says you can clean it with a power wash, but I’d recommend first removing the fabric seat covers which can also double as sleeping bags. I know… well, it is a concept after all.

Of greater realistic significance, the concept features a 2250Wh removable battery which supplies power through conventional household outlet. It can also be used outdoors when away from a mains electricity supply.

Oh yes. Away from Renault, Peugeot gave its new 408 its first public debut. Something of a head turner, the ‘dynamic fastback’ is already available to order at Arnold Clark showrooms. Relatively long in length at 4690mm and with a 2,790mm wheelbase, it’s also tall at 1,480mm, meaning it has a feeling more of a raised-up saloon than a coupe-SUV.

The ‘First Edition’ model — only 50 will be available ahead of the main model launch and can be ordered exclusively through Peugeot’s Buy Online platform — is the first model available. Based on the range-topping GT model, the First Edition starts from £43,250, but receives some extra equipment as standard. 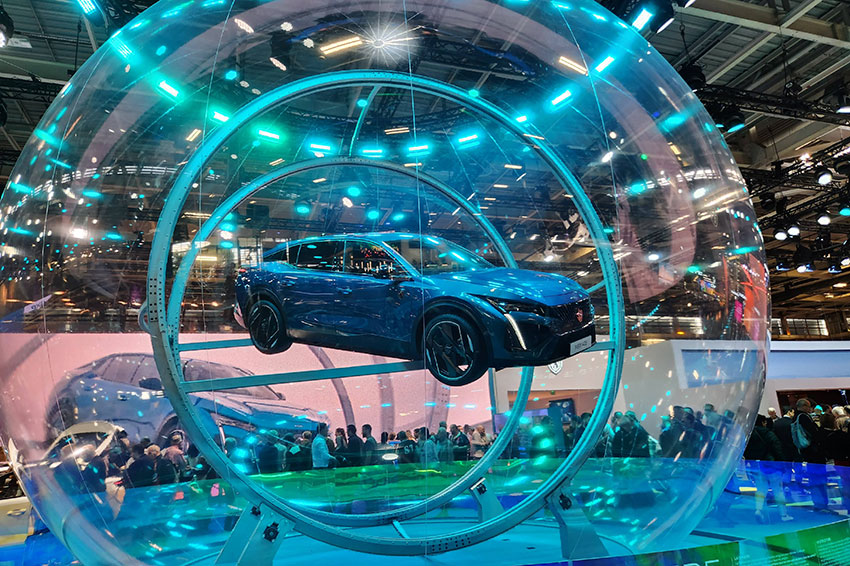 Sitting between the large family 508 hatch and the mid-size 3008 SUV, the 408 will be powered by a single pure-petrol engine as well as plug-in hybrid powertrains from its launch in early 2023. A fully electric version, badged e-408, will arrive next Spring.

You mentioned something from Mercedes…

I did. Mercedes-Benz, meanwhile, revealed its all-new EQE SUV. Essentially a shrunken version the German carmaker’s electric flagship EQS SUV, the newcomer will be available with a choice of zero-emission powertrains, plus a 678bhp AMG range-topper.

The company’s keeping tight-lipped about battery and trim specifications, but initially we should expect one standard model, likely badged EQE 300, which will be fitted with a 90kWh battery. The SUV will get the option of dual motors for 4MATIC all-wheel drive. 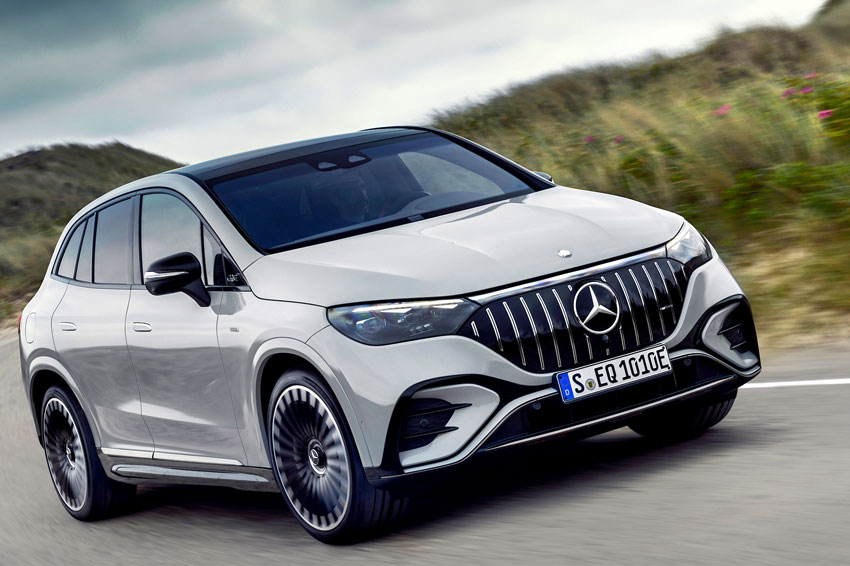 As for the all-important question of range: expect in excess of 342 miles on a full charge. That will drop though for the Mercedes-AMG EQE 53 4MATIC+ SUV, which is likely to be closer to 260 miles. Charging? It’ll match that of the EQS saloon with 170kW DC rapid charge speeds, meaning 10%-80% in just over 30-minutes.

Officially, prices will be confirmed at the European launch of the EQE SUV in May of next year but expect it to be priced from around £90,000.

Jeep also chose Paris for the first official appearance of its Avenger SUV. Designed and engineered in Italy, the compact all-electric SUV is powered by a 54kWh battery comprised of 10 cell modules in the rear of the car and seven modules under the front seats. A three-phase 11kW AC charger will be standard across the range, plus 100kW DC charging which will allow the car to charge from 20%-80% in 24 minutes.

Introduced as a front-wheel drive model, power from the single motor is 154bhp and 260Nm of torque. We’ve no performance figures yet, but it will have a range of around 249-miles. 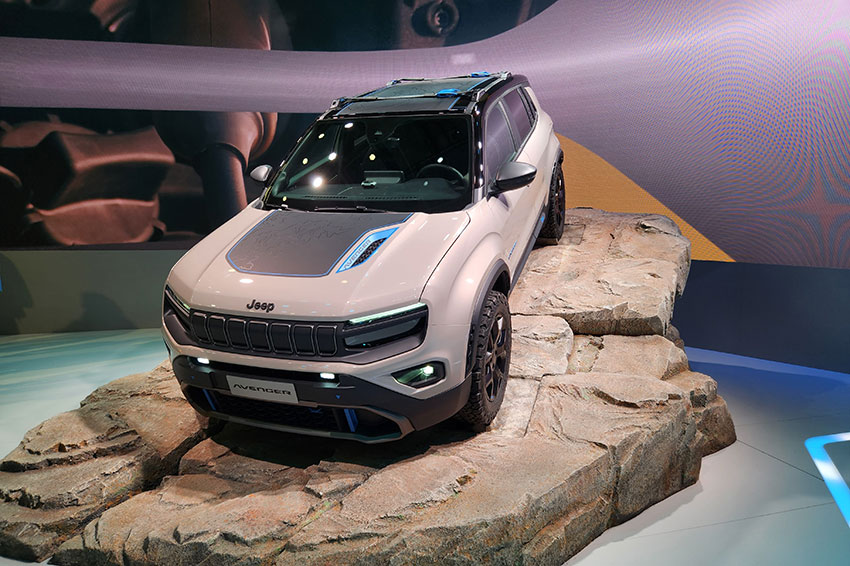 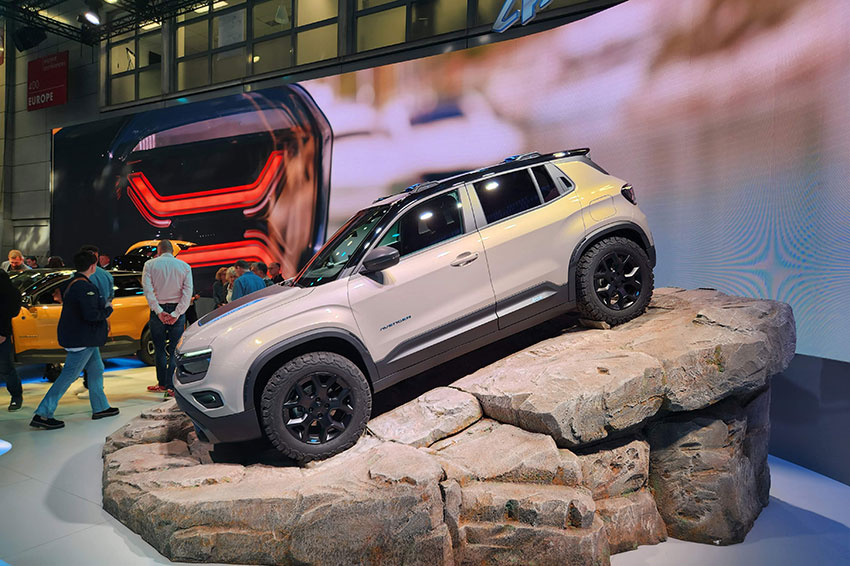 Will there be a 4WD Avenger?

Strange you should ask that. As if revealing the new Avenger for the first time wasn’t enough for Jeep, the Stellantis company also showcased how it could make the new baby SUV four-wheel drive by unveiling the Avenger 4x4 Concept.

Based on an evolution of e-CMP platform which also underpins other front-drive SUVs in the Stellantis group, including Vauxhall’s Mokka-e and the Peugeot e-2008, Jeep engineers have beavered away to introduce revisions which would allow 4WD to be incorporated.

It’s important to stress that, at the moment, the show car in Paris has simply been designed to show how the more extreme version of the Avenger would look.

Boasting a wider track, plus stretched and extended wheel arches to accommodate chunky all-terrain tyres, the concept also benefits from improved breakover and departure angles to allow for offroad driving.

The concept also gets more floodlights in the front bumper, a bonnet sticker designed to minimise reflection and glare through the windscreen, and a lightweight cargo system that uses belts to fix loads above the roof. Cleverly, the roof also has scratch protection. And while Jeep has confirmed that the Avenger ‘will be added to the range of 4xe models coming in the future’, it hasn’t released any powertrain or timeline details.