The EX90 will be the Swedish manufacturer’s flagship electric car. 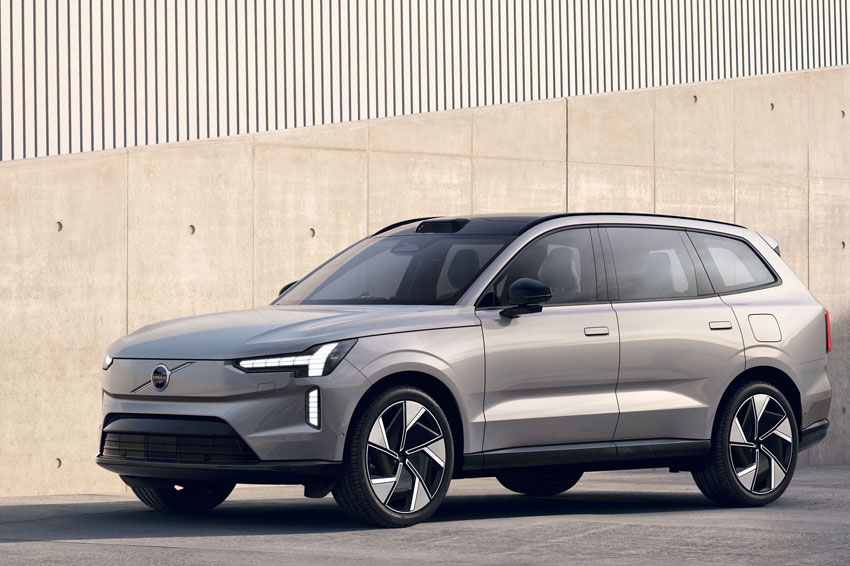 Volvo has lifted the wraps from what will become its flagship electric car, the EX90. And it’s hugely significant, even for the Swedish manufacturer.

Why? Well, for a company renowned above everything else for its safety, new company boss Jim Rowan has stated simply: ‘The EX90 sets new standards for safety: it’s a statement of where we are, and where we are going.’

Effectively an all-electric equivalent to the current Volvo XC90, which will continue to be sold in parallel with the new EV SUV, the EX90 — a true seven-seater that will be capable of covering up to 373 miles on a single charge — is the company’s third electric car following the XC40 and C40 Recharge. The newcomer, though, is the first to sit on a new dedicated platform, the SPA2 architecture, already seen on Polestar 3 and produced by Volvo’s parent company, the Geely Group. 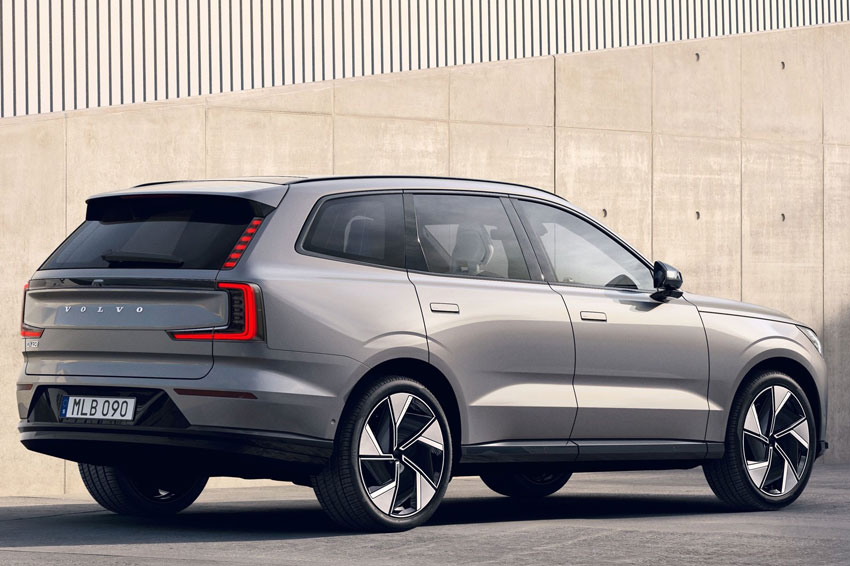 Ok, what’s new with the safety?

Where do we start? First, it will have Lidar as standard. Lidar is the technology which determines ranges by targeting an object or a surface with a laser and measuring the time for the reflected light to return to the receiver. Why is it important? Most specifically at night, it will detect potential dangers way ahead of the car in the dark and alert the driver to their existence, allowing more time for reaction.

Already an option on the Polestar 3, Volvo’s sister company, the Lidar sensor will be mounted on the front edge of the EX90’s roof. It will work in tandem with a range of other internal and external sensors and cameras to power advanced driver assistance and safety options.

Initially, these systems will include a steering support function that will help changing lanes, plus an upgraded pilot assist system. Eventually, according to Volvo, the systems will deliver an over-the-air subscription update that will offer ‘unsupervised autonomous driving’. This facility, of course, will only be operable in certain conditions and places.

Yep. Also included in what Volvo calls the EX90’s ‘invisible shield of safety’ are interior sensors which can gauge eye concentration. Powered by Volvo’s own in-house-developed algorithms, the technology allows the EX90 to understand when the driver is distracted, drowsy or otherwise inattentive, beyond what has previously been possible in a Volvo car. 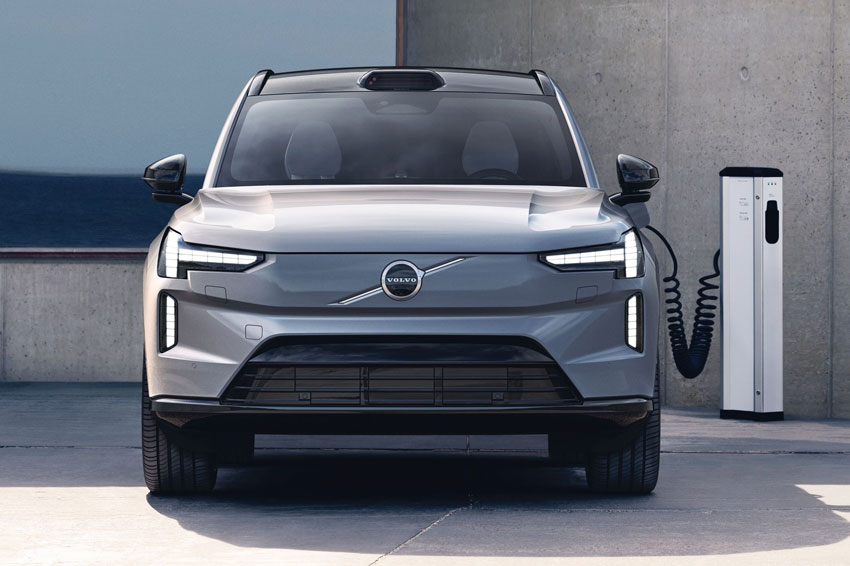 Its first reaction is to softly nudge the driver. If that’s not enough, it will become more ‘insistent’. And if the unthinkable happens and the driver falls asleep or is taken ill while driving, the EX90 is designed to safely stop and call for help.

Any other new tech?

Loads of it. The safety kit, alongside that of the infotainment and battery management systems will be powered by a core software system that uses advanced Nvidia Drive platforms. This will work in tandem with Qualcomm’s Snapdragon Cockpit platform mixed with in-house Volvo software.

I know that sounds very techie, but Volvo has taken the stance that EX90 won’t be just a new car, ‘it will be a highly advanced computer on wheels’. And while it will be class-leading when it enters Arnold Clark showrooms, it will also continue to improve thanks to regular over-the-air software updates. 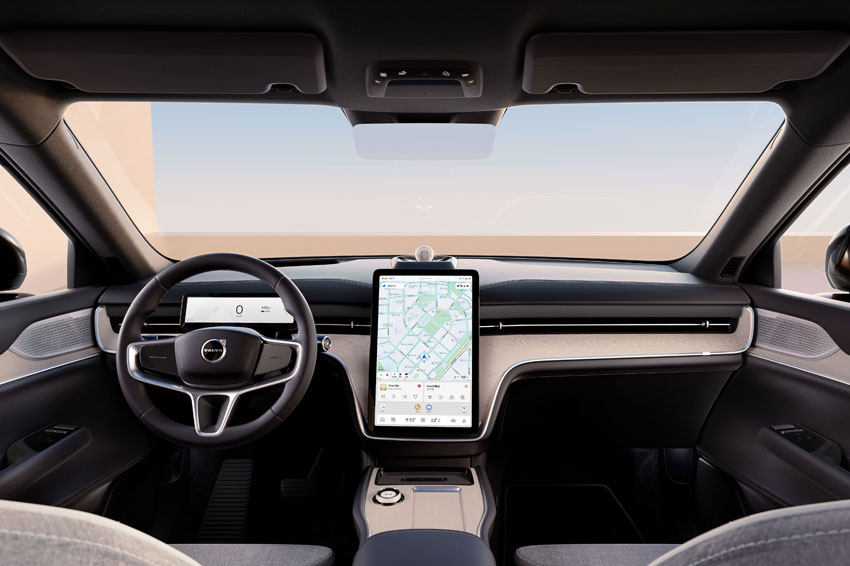 Expect lightning-fast computing power and high-quality graphics on the in-car screens and head-up display. With Google built in, the 14.5-inch portrait infotainment touchscreen features a 5G connection as standard and sits at the heart of the largely-button free, minimalist cabin.

In addition to a variety of Google apps, plus Apple CarPlay and Android Auto compatibility, there’s also a Bowers & Wilkins Dolby Atmos-enabled stereo. Customers will also be able to use a smartphone-based digital key to access the car and adjust its home charging schedule.

That’s all great: tell me more about the actual EX90

Coming with a choice of two dual-motor powertrain options — both are equipped with a 107kWh (usable) battery — it’s more than five metres long, seats seven and with the rear seats up, it will have a boot space of 310 litres. Fold the third row of seats away, and this rises to 655 litres. And if you have just the front row of seats in place, you can carry a humungous 1,915 litres of detritus.

The entry-level Twin Motor delivers 402bhp and 770Nm of torque and, considering the EX90 tips the scales at 2,818kg, propels the big SUV from standstill to 62mph in just 5.9 seconds. Step up to the more expensive Twin Motor Performance, and thanks to its 510bhp and 910Nm of torque, you can shave a full second off the 0-62mph time. Both versions are limited to a top speed of 112mph. 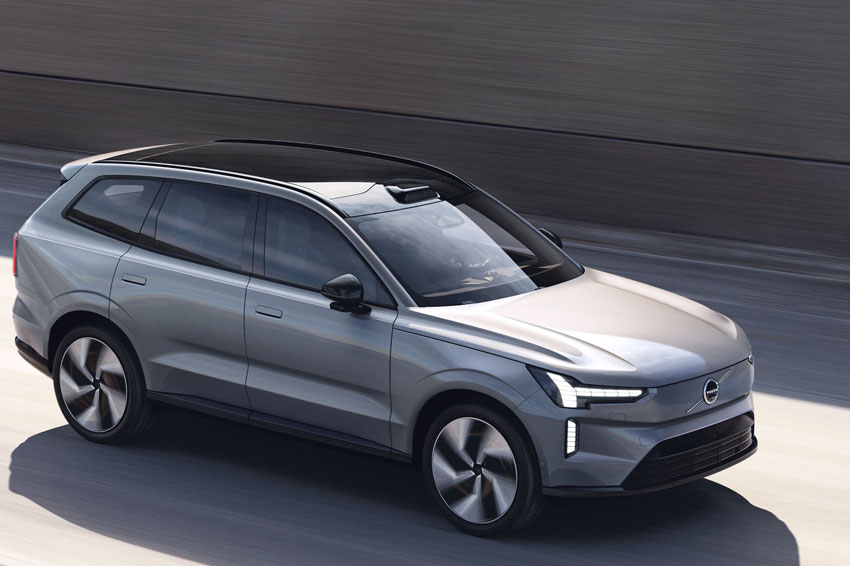 Its SPA2 architecture provides bi-directional charging capability. What does that mean? Well, though the technology is still under development, it could allow users to send energy from the batteries back to the grid during peak times. In addition, the system can also power electrical appliances, or other Volvo EVs.

There’s no doubt the styling bods were instructed to continue the current XC looks, hence the XC40-like grille. Volvo’s ‘Thor’s hammer’ headlights remain the most noticeable attraction at the front, albeit with a thinner graphic, while at the rear the vertical lightbar — first seen on the Volvo 850 — continues.

The current base model will be available through Care by Volvo at £1,599 a month, with the premium model costing £1,669 a month. But expect an entry-level EX90 to arrive in the future, probably priced from around £75,000.

As for availability. Expect sales to start in spring next year.